France���s top scientists have advised the country to be ready for another wave of Covid-19 as they predict “a resumption of the circulation of virus at a high level in the fall of 2020.”

The French scientific council said in its latest advice at the end of July that it believes the situation is “fragile” and that it could “change course at any time to a less controlled scenario like in Spain, for example." It warns citizens to follow government guidelines such as wearing masks.

“The future of the epidemic in the short term is largely in the hands of citizens, notably through their ability to respect all social distancing measures,” the scientists warned.

To prepare for a new epidemic wave in the fall, the council highlights the importance of several protocols: social distancing measures, tests, the isolation of people at risk of severe disease, and the protection of nursing homes and fragile populations.

The council also pointed out the importance of contact tracing and recommended that the government actively promote the StopCovid tracing app, which has so far only been downloaded by a “small number” of people.

“Given the limits of traditional tracing, the scientific council considers that the StopCovid application can play an important role in the control of the epidemic in the event of the resumption of the epidemic and be a tool for controlling it if ... many French people use it,” they said.

On Monday, the French Health Ministry released the latest data showing an average trend of more than 1,000 new positive cases per day for the past six days, bringing the pandemic back to the numbers seen at the end of April. The number of people in ICU units has also been slightly increasing over the past few days.

Lari said that among the cases, 1,560 people have been hospitalized.

Coronavirus cases began to climb again in the country after the Iranian government lifted restrictions mid-April, with record-deaths reported over the month of July, according to Health Ministry data.

The Islamic month of Muharram is also expected to start on August 21, where Shiites normally gather in crowds and mourn the death of Imam Hussein. Iranian President Hassan Rouhani said last month that the religious ceremony will be held following specific health and preventive measures.

It was the kind of gift that should have come with a return slip.

The Trump administration's donation of 2 million doses of hydroxychloroquine to Brazil -- one of a handful of countries that still recommend the drug for Covid-19 -- has been mostly untouched since arrival, Brazilian officials have told CNN. Vast quantities of the pills are still sitting in storage in the Brazilian megacity of São Paulo, and one former health minister believes they may eventually have to be destroyed.

The pills' fate in Brazil is appropriate given their medical uselessness against Covid-19: Study after study has shown hydroxychloroquine does not work to treat the coronavirus, and may be harmful. Yet Brazilian President Jair Bolsonaro insists that hydroxychloroquine helped him recover from a two-week infection, and Brazil's health ministry advises that doctors prescribe the drug to treat mild cases, even for pregnant women. Meanwhile, the number of coronavirus infections in the country is skyrocketing.

So why haven't the pills been distributed? 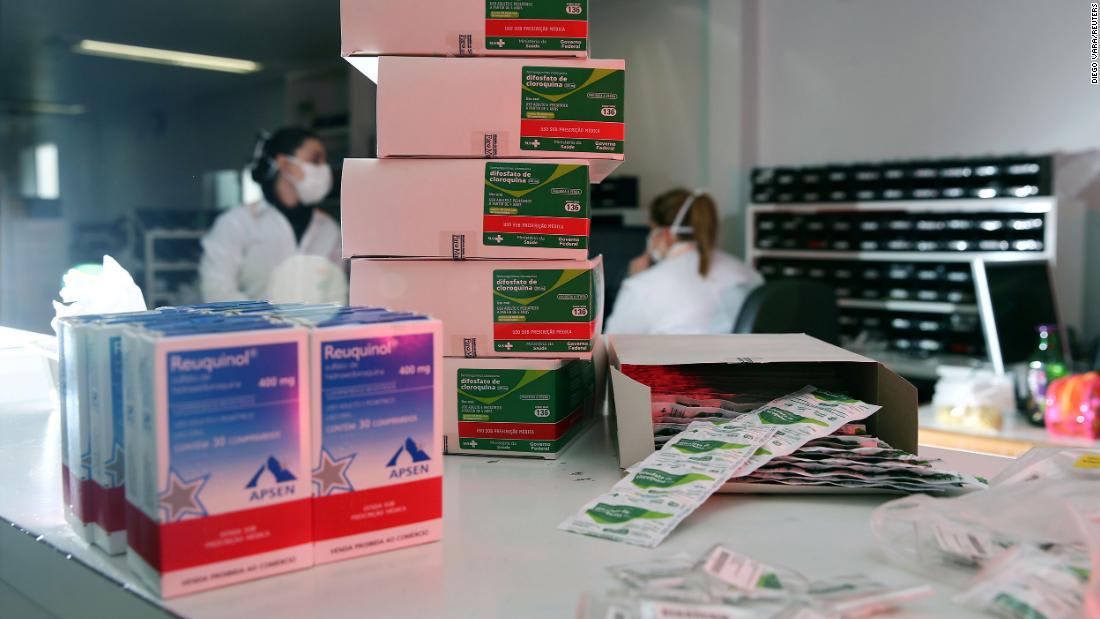 The US sent Brazil millions of hydroxychloroquine doses. Months later, they're still in storage

Germany is currently experiencing a second coronavirus wave, according to a physicians' association in the country.

"We are already in a second … wave of rising infections,” Susanne Johna, head of the Marburger Bund, said in an interview with the Augsburger Allgemeine newspaper.

Germany has seen a rise in new Covid-19 infections in the past days, causing alarm among politicians and disease experts who are calling on citizens to more strictly adhere to physical distancing and hygiene measures.

“There is the danger that we could gamble away the successes we have achieved so far in Germany due to a combination of blocking out reality and a yearning for normalcy,” Johna said in the interview.

The Marburger Bund believes Germany’s hospital system is currently well prepared to face a rise in infections after the country vastly expanded its ICU capacities. But Johna warned citizens not to get complacent:

“We are all longing for normalcy. But we continue to live in a situation that simply is not normal.”

The impact of Covid-19 is being felt in London, where previously bustling streets are now often deserted and some shops are still shuttered. But the British capital also has a long history of enduring hardship. CNN's Phil Black reports.

Hong Kong confirmed an additional 80 cases of Covid-19 on Tuesday, of which 75 are local infections.

The city's health department said the source of 32 cases are still under investigation.

The five imported cases are from two aircrew staff from Manila and Belgium, two domestic helpers from the Philippines and one person from Russia.

There were about a dozen confirmed cases in the Hung Hom and To Kwa Wan markets involving multiple shops which are now being investigated. Elderly care homes also continue to be a source of local cases.

Four new deaths were reported, bringing the death toll in the city to 41. The total number of infections reported in Hong Kong stand at 3,670.

There have been more than 18.2 million confirmed cases of coronavirus worldwide, and close to 700,000 deaths, according to figures from Johns Hopkins University.

Here's the latest on the pandemic:

Potential "generational catastrophe": UN Secretary-General Antonio Guterres warned on Tuesday that the world is facing a "generational catastrophe" because of school closures during the coronavirus pandemic. In mid-July, schools were closed in more than 160 countries, affecting more than 1 billion students, while at least 40 million students worldwide have missed out on education in their critical pre-school year.

India logs more than 50,000 cases for sixth day in a row: India recorded 52,050 new Covid-19 infections and 803 deaths from the virus over the past 24 hours, the country's Ministry of Health and Family Welfare said on Tuesday -- the sixth consecutive day that India has reported more than 50,000 cases.

New penalties were also announced for people found to be in breach of directions, including a newly increased $3,540 on-the-spot fine for those who breach isolation orders. Andrews said the new fines were being imposed because of the 3,000 door knocks on infected people -- who are meant to be self isolating -- 800 patients were not home.

Trump asks supporters to wear masks: US President Donald Trump on Monday sent a campaign email, typically used for soliciting donations, to make a different request of his supporters: consider wearing a mask.

The rare move comes after Trump avoided wearing a mask in public for months until he tweeted a photo of himself wearing one in a stark messaging pivot in July -- though footage later surfaced of Trump not wearing a mask later that day.

According to the results of a national survey released on Monday, the northern region of Lombardy, the worse-hit by the pandemic, reported the highest number of people with antibodies, 7.5%, while the two main Italian islands, Sicily and Sardinia, had the lowest number of 0.3% of the population.

Cases are ticking upwards in parts of Europe, the process of unlocking is paused in the UK, and the Americas are still battling to contain vast Covid-19 outbreaks.

But as the tremors of a potential second wave of infections are starting to be felt, some governments are reaching for a new tool that many public health experts have been touting for months: stricter mask mandates.

In recent days, masks have become mandatory in all public spaces -- indoors or outdoors -- in Madrid, Greece, Portugal's Madeira Islands and Hong Kong.

Those moves seemingly contradict the long-held understanding that Covid-19 is more dangerous indoors. The British government, among others, used its first steps out of lockdown to encourage people to meet outdoors; parks, beaches and nature spots around the world have been inundated by guests throughout the pandemic.

But the reasoning behind the decisions is simpler than that: after months of mixed messaging from health authorities on face coverings, governments are opting for blanket rules to help make mask-wearing a cultural norm.

"There's been a lot of confusion about where people should wear masks, and where there's confusion, people just disengage and don't wear them," Melinda Mills, director of Oxford University's Leverhulme Centre for Demographic Science, told CNN. "That's why (some countries) are moving to a broad, blanket policy.
"I'm for clarity in public messaging, and in many countries, I think it's been a mess," she added.

Mask mandates: Researchers reported Monday that communities that mandated the use of face masks in public saw an ongoing decline in the spread of the coronavirus, but it takes some time.

Once mandates had been in place for about three weeks, the daily growth rate slowed by about 2% on average, researchers reported in the journal Health Affairs.

Their estimates suggest that these percentage decreases could add up. They calculate that between 230,000 and 450,000 Covid-19 cases could have been averted by May 22 by mask mandates. 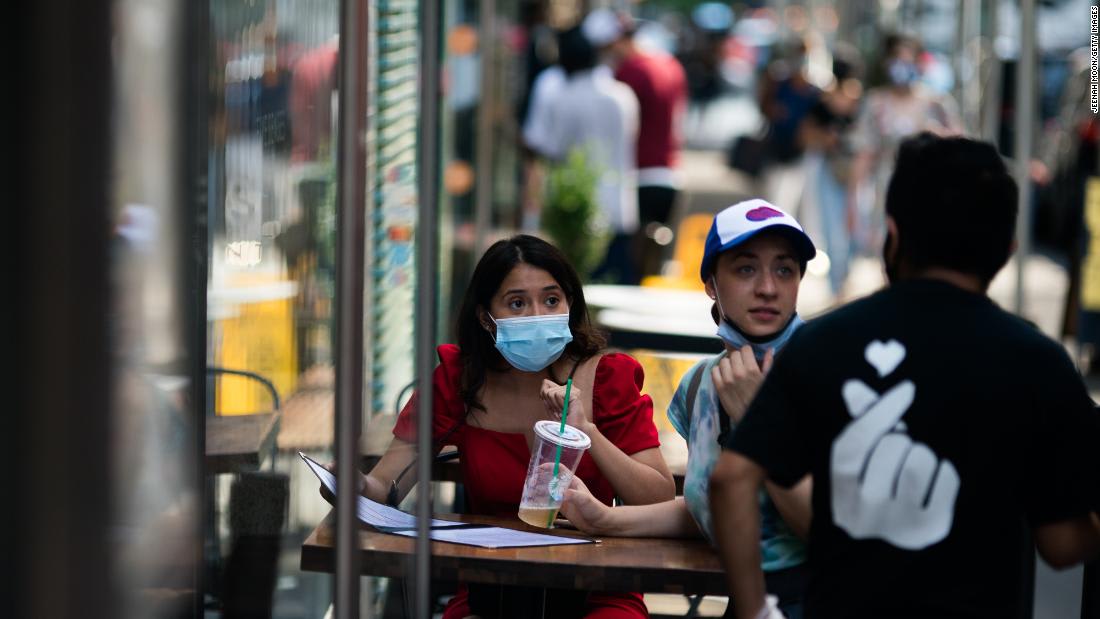 Countries are strengthening their face mask rules. Soon you might have to wear one outdoors, too

US leaders have struggled to enforce social gathering rules and mask mandates as residents push for a return to normal life amid a rampant spread of coronavirus. But while people may be tired of the pandemic, there's still a long way to go, one world health official said Monday.

"We need to accept that this is challenging, but use these challenges to really put it towards something positive and fight this pandemic together."

New restrictions were put in place by many US states after parts of the country began reopening and -- several weeks later -- saw a spike in cases.

In May, when most states first began lifting restrictions and images of crowded bars and parties emerged, experts warned that without social distancing and face coverings, there would likely come a surge. Months since those first reopenings, states across the South are reporting thousands of new cases each day and as some seem to near a peak of cases, parts of the Midwest are now raising alarm.

The spread of the virus is more widespread than ever before, prompting White House coronavirus response coordinator Dr. Deborah Birx to say over the weekend the US has entered a "new phase" of the pandemic.

Rising death toll: Across the country, more than 4.7 million have been infected since the start of the pandemic, and at least 155,469 have died. Health officials project there will be thousands more deaths in the coming weeks.

At least 13 states have reported more than 100,000 coronavirus infections, and four of them -- California, Florida, Texas and New York -- have recorded more than 400,000. 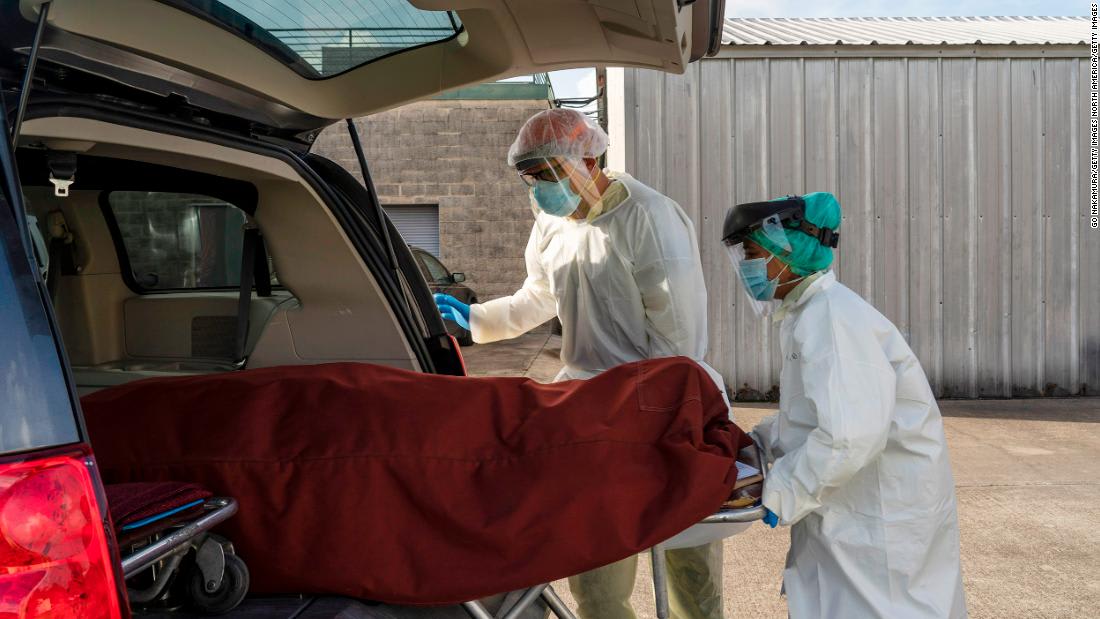 There's still a long way to go in the pandemic, WHO official says, while US tops 155,000 deaths