Tailored Brands, the owner of Men Wearhouse and Jos A. Bank, filed for Chapter 11 bankruptcy, becoming the latest US retail casualty of the pandemic.

Tailored Brands said in a statement that it voluntary filed Chapter 11 bankruptcy protection on Sunday in the US Bankruptcy Court in Houston due to "the unprecedented impact of COVID-19."

The company expects its four retail brands to continue to operate during the restructuring process, and said it has reached an agreement with lenders to reduce debt by $630 million.

This follows Tailored Brands decision on July 21 to eliminate about 20% of its corporate workforce and close up to 500 stores as it deals with a "challenging retail environment."

Lord and Taylor also filed for Chapter 11 bankruptcy protection on Sunday, according to court documents.

Hong Kong confirmed 80 new cases of Covid-19 in the city on Monday -- the first time in nearly two weeks that cases have dropped below triple digits.

All cases are locally transmitted.

About 56 of the local cases are related to previous cases, while the source of infection of the other 24 is still under investigation.

Health officials warned that though the infections have gone down compared to the last two weeks, it is too early to call the decrease in numbers a trend.

Two additional deaths were reported, bringing the death toll to 37 and total number of confirmed cases in Hong Kong to 3,590.

Spain received 204,926 international tourists in June 2020, 97.7% fewer than last year, a study from the Spanish National Institute of Statistics revealed on Monday.

The data also showed that the total spend of international tourists visiting Spain in June decreased 98.6% compared to the same month last year. In comparison to June 2019, the spend per tourist dropped 40.8% to $755 (€651) and the average duration of trips was reduced by one day to 5.7 days.

In June, 920,778 national and international travelers stayed in hotels or similar establishments in Spain, with a total of 1,820,455 overnight stays. Both figures represent less than 10% of the estimated totals for this period a year ago. Four-star hotels are the most visited, followed by three-star establishments.

Virus threatens tourism: Spain's tourism industry has suffered setbacks due to the pandemic. In July, the UK government unexpectedly announced that all people returning from Spain would be required to self-isolate for two weeks due to an increase in coronavirus cases, reversing its previous stance.

According to Statista, which provides data on the global digital economy, Spain is one of the countries most vulnerable to Covid-19's impact on tourism, with travel and tourism contributing 14.3% to Spain's GDP last year.

The British government has procured "millions" of two separate coronavirus tests that will be able to detect the virus in 90 minutes, the UK department of health said Monday.

Both tests will be able to detect Covid-19 and other winter viruses such as flu and respiratory syncytial virus in 90 minutes and will not require a clinical setting, the department said in a statement.

The tests will be rolled out in hospitals, care homes and labs across the UK next week.

“We’re using the most innovative technologies available to tackle coronavirus. Millions of new rapid coronavirus tests will provide on-the-spot results in under 90 minutes, helping us to break chains of transmission quickly,” Health Secretary Matt Hancock said in a statement.

The department of health has said that the tests “will hugely increase testing capacity ahead of winter, delivering fast results that will help to break chains of transmission quickly.”

One test will analyse DNA in nose swabs, and the other will process swab and saliva samples to detect the presence of Covid-19 in 60 to 90 minutes.

China’s Ministry of Foreign Affairs (MOFA) said Monday that Hong Kong’s legislative council elections are considered local elections in China, adding no foreign entity has “any right to interfere and nothing could justify such interference.”

Here's some background: On Friday Hong Kong’s Chief Executive Carrie Lam used a colonial-era emergency regulation to postpone the September Legislative Council elections by a year due to the growing Covid-19 outbreak in Hong Kong.

Some pro-democracy lawmakers accused the government of wanting to avoid a potential loss following China's imposition of a new national security law on the city.

MOFA spokesperson Wang Wenbin said Monday that the decision was a “legitimate measure to protect Hong Kong residents safety and health” and a way to ensure the elections “can be safe, fair, and just.”

“There are many precedents postponing elections because of disasters such as an epidemic. The Hong Kong SAR government's decision is in line with this common practice, is legitimate, reasonable, and lawful,” Wang said.

About 5 million people in Australia's second-most populous city, Melbourne, are contending with some of the harshest restrictions ever imposed on the city after authorities declared a "state of disaster" on Sunday.

Those restrictions include a curfew in Melbourne for the next six weeks, a ban on wedding gatherings, and schools must go back to online classes. Only one person per household is allowed to leave their homes once a day -- outside of curfew hours -- to pick up essential goods, and they must stay within a five-kilometer (3.1 miles) radius of their home.

On Monday, further businesses restrictions were announced, including the shuttering of nonessential industries.

The state of Victoria, of which Melbourne is the largest city, recorded 429 Covid-19 infections on Sunday, down from 671 cases the day before, according to Victoria's Chief Health Officer professor Brett Sutton. Thirteen new deaths were also announced, bringing the state's total to 136, and there have been a total of 11,937 confirmed infections.

Sunday's announcement underscores how quickly early success in containing the virus can unravel.

In May, Australia was held up as a global model for its handling of the outbreak, which started with early measures to bar entry from high-risk countries. Stricter curbs on social gatherings, expanded testing, restaurant and bar closures, followed as cases rose, with some states sealing their borders.

But Covid-19 cases in Victoria have risen suddenly in recent weeks, with many new infections in elderly care homes and among health care workers. Eight of the 13 new deaths on Sunday are linked to known outbreaks in elderly care facilities.

"This six-week period is absolutely critical," said Victoria state Premier Daniel Andrews in a daily press briefing on Monday. "This is a very tough day, and there will be many more of those until we get to the end of this." 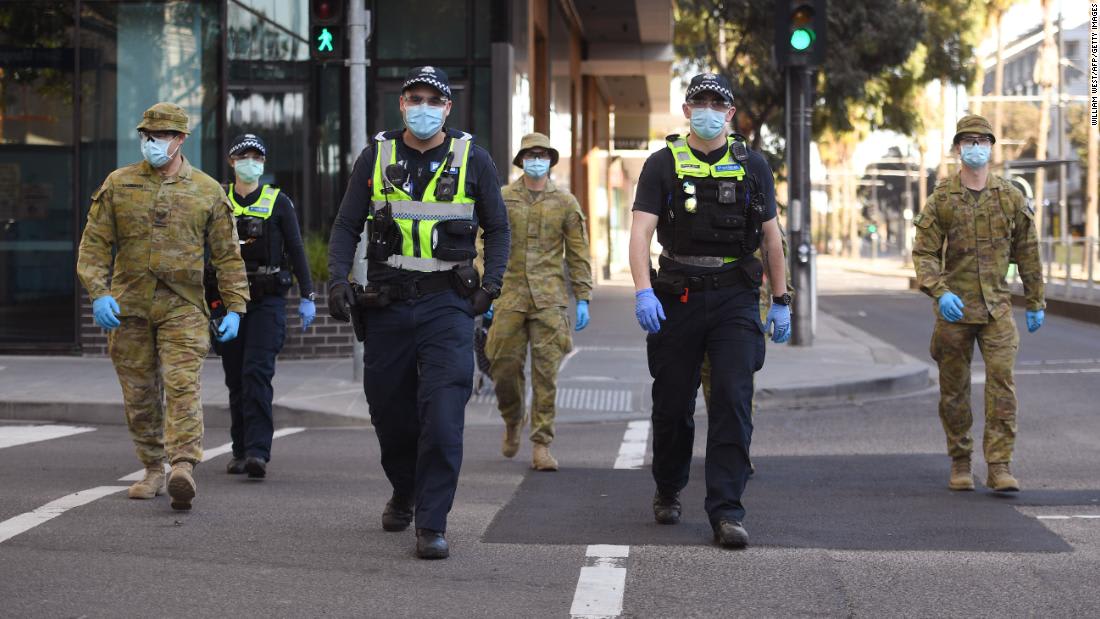 Questioning the world's toughest coronavirus restrictions can be a risky business in the Philippines.

In mid-March, Philippine President Rodrigo Duterte ordered parts of the country to go into a quarantine that would eventually last up to 80 days and become one of the world's longest and strictest lockdowns.

Protests against job losses and food shortages during that period were met with a strong police response and mass arrests. In April, Duterte publicly said police should "shoot ... dead" anyone who violated virus restrictions.

"I will not hesitate. My orders are to the police, the military and the barangays: If they become unruly and they fight you and your lives are endangered, shoot them dead," Duterte said during a speech.

Though restrictions were eased in June, owing to concerns around the econony, coronavirus cases have since risen with the Philippines now reporting the second-highest number of confirmed cases in Southeast Asia.

The country announced its highest single-day jump in new coronavirus infections on Sunday, according to CNN affiliate CNN Philippines, with 5,032 confirmed cases in 24 hours. The Philippines has more than 100,000 coronavirus cases in a population of 106 million. 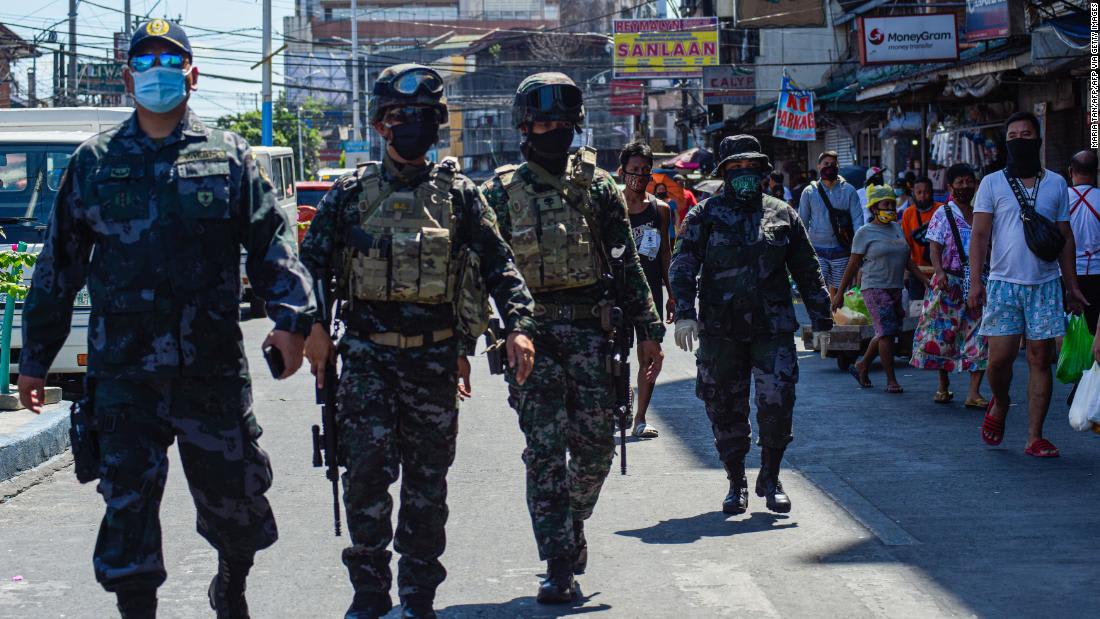 HSBC's profits plunged in the first half of this year as the bank was weighed down by the coronavirus crisis.

The London-based lender said that pre-tax profit in the first half of the year fell 65% to $4.3 billion compared to the same time last year as revenue fell and as credit losses were worse than expected.

"Our first half performance was impacted by the Covid-19 pandemic, falling interest rates, increased geopolitical risk and heightened levels of market volatility," CEO Noel Quinn said in a statement.

The bank added that expected credit losses for 2020 could hit as much as $13 billion this year, worse than earlier estimates "given the deterioration in consensus economic forecasts."

The company also disclosed a $1.2 billion writedown due to an "impairment of software intangibles, mainly in Europe."

Falling income didn't help either. The bank's revenue tumbled 9% in the first half versus the same time last year, hurting profits even more. 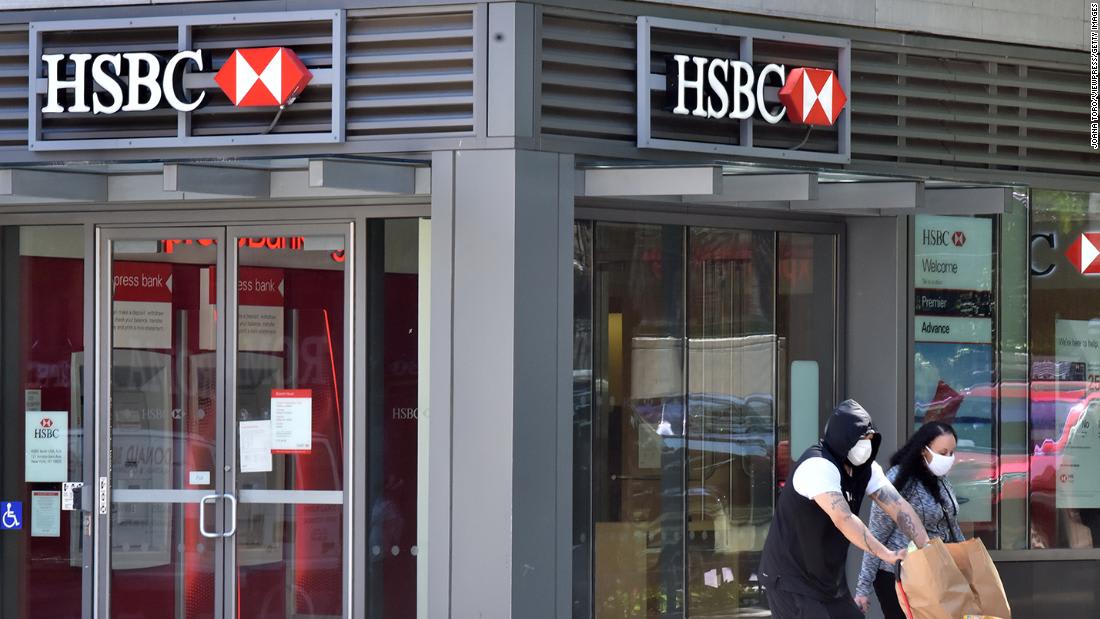 Lee Man-hee, the leader of the South Korean religious group Shincheonji, was arrested after being charged with embezzlement and violating South Korea's Infectious Disease Control and Prevention Law.

Lee was accused of submitting false information about the group's gatherings and congregation list to the health authorities. Shincheonji is believed to be at the center of South Korea's first major outbreak of Covid-19 in February.

Shincheonji said in a statement that Lee has fully cooperated with authorities and called his arrest "regrettable."

A member of Shincheonji was the 31st person South Korea who was confirmed to have contracted Covid-19. After the patient's diagnosis, health authorities said they faced difficulty tracing the patient's close contacts. South Korean police deployed hundreds of officers to trace members of the group who could not be reached.

Lee issued a public apology in March, but denied accusations that he and his group have been hampering the health authorities’ efforts to contain and prevent infections. At the time, South Korea had identified more than 4,200 cases of Covid-19, more than any country except mainland China. More than half of those were tied to Shincheonji.