Best Buy is the latest major retailer to announce it will stay closed on Thanksgiving.

Instead, Best Buy will bolster its digital options and offer seasonal deals "earlier than ever," the company said late Tuesday.

Some context: That echoes plans from Walmart, Target and Dick's Sporting Goods. All have said within the past week that they too won't be open on Thanksgiving and will begin holiday sales earlier in the year.

Retailers are rethinking their plans for the holiday shopping season as coronavirus cases rise, prompting concerns over crowds in stores.

The negotiators responsible for brokering a sweeping stimulus deal that will keep many Americans from losing federal unemployment benefits are currently at the "airing our differences" phase of talks.

But the weekly $600 federal unemployment enhancement expires in 48 hours, and, as a person involved told CNN last night, negotiators are "in different universes right now."

Iraq’s Ministry of Health reported at least 2,968 new coronavirus cases on Wednesday. This is a new record in daily cases.

The health ministry reported 68 Covid-19 deaths, bringing the total number of deaths in Iraq to 4,603.

As the US nears 150,000 coronavirus deaths, President Trump is traveling to Texas today, one of the country's virus hotspots.

According to the President's schedule, Trump lands in Texas at 11:30 a.m. local time. He is participating in a roundtable with supporters and delivering remarks at a fundraising committee luncheon in Odessa, Texas.

Afterwards, Trump will motorcade to Midland, to participate in a tour of Double Eagle Energy Oil Rig and deliver remarks on energy.

Here is a look at where cases stand across the state, according to data from Johns Hopkins University. 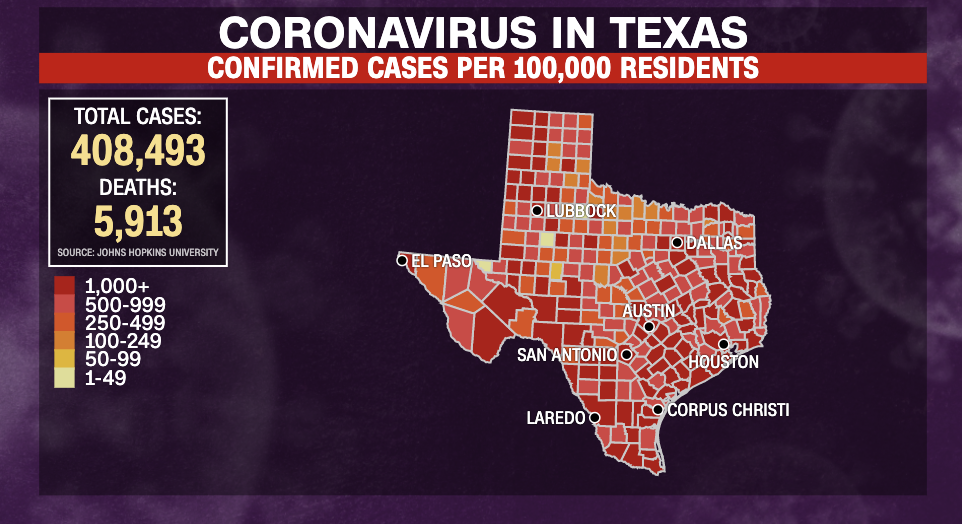 Texas currently has the fourth-highest number of Covid-19 cases: 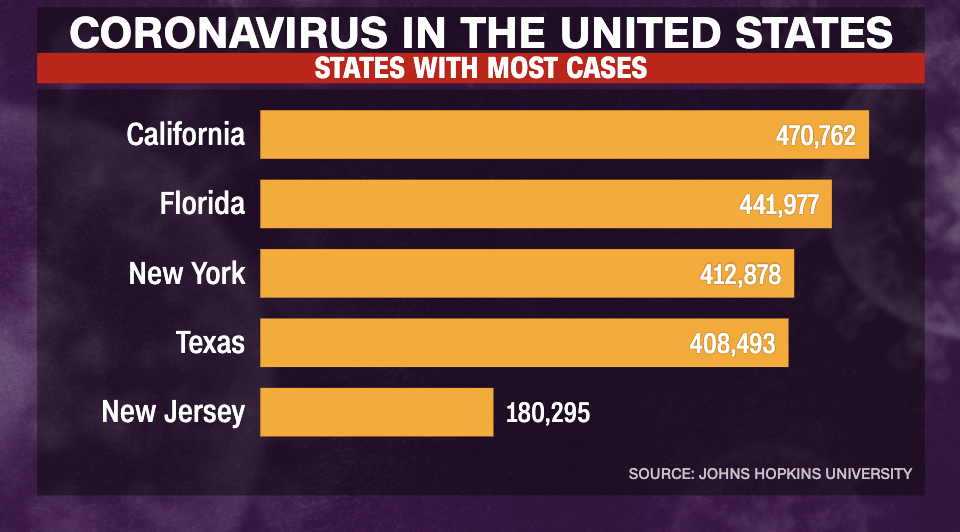 The US is nearing the grim milestone of 150,000 coronavirus deaths as the country continues to battle surges of Covid-19 cases.

According to Johns Hopkins University's latest tally, at least 149,260 people have died from Covid-19 in the US. The country leads the world in cases with more than 4.3 million cases.

Meanwhile, at least 22 US states are seeing increases in new Covid-19 cases compared to the previous week. 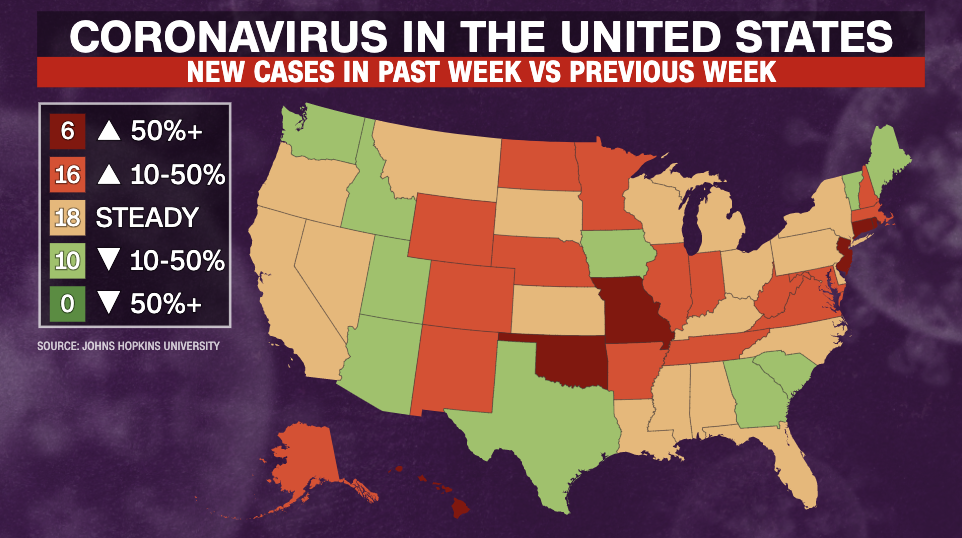 Peru reported its highest daily increase in new Covid-19 cases with at least 5,288 in the last 24 hours, according to data released by the Health Ministry on Tuesday evening. The increase is the highest the country has recorded since June 12.

The total number of coronavirus cases in the country stands at 395,005, according to the same data, while the death toll reached 18,612 with 194 new deaths.

Earlier on Tuesday, President Martin Vizcarra announced an additional grant of 760 soles (more than $200) for 8,500 million vulnerable families affected by the pandemic.

During a televised speech celebrating Peru’s independence day at parliament, the president also announced a lifetime financial grant for children orphaned by Covid-19 of 200 soles per month (about $57).

"With an investment of 6,350 million soles (more than $1.8 billion) to carry out infrastructure works and generate more than one million jobs throughout the country, which will start in August." Vizcarra said .

Some background: Peru started to ease lockdown restrictions on July 1 and the state of emergency in the country is due to finish on July 31.

“Lockdown has allowed us to avoid a catastrophe of unimaginable consequences” Vizcarra said.

Peru has the third highest number of Covid-19 cases in the Latin America, behind Brazil and Mexico, according to Johns Hopkins University.

Broward County is directly north of Miami-Dade, which has become the epicenter of Florida's coronavirus pandemic.

“We are here to serve our communities, and we are making decisions on how to best manage our current volume, which includes the patients we are seeing from northwest Miami-Dade,” Fernández said.

Fernández urged the community to wear masks, practice physical distancing and was their hands to help stop the spread of the virus.

In Florida, at least 54 hospitals have reached capacity in their intensive care units and show zero ICU beds available, according to data released by the Agency for Health Care Administration (AHCA).

Ten of the hospitals at capacity are in Miami-Dade County, and eight of them are in Broward County, AHCA data shows.

Another 44 hospitals have 10% or less ICU capacity available, according to AHCA.

AHCA reports about 16% ICU beds are available across the State of Florida.

25% of Covid-19 patients in the care of Florida's Jackson Health require ICU treatment, according to Jennifer Piedra, the spokesperson for the Miami-Dade County hospital.

Jackson Health is currently caring for seven pediatric Covid-19 patients, per Piedra. Since the inception of the pandemic, children under the age of 18 have been the smallest proportion of patients treated, says Piedra.

“At Jackson Memorial Hospital, we have multiple intensive care units located throughout our campus. All of our patients in need of critical care – for COVID or for other reasons – are receiving the appropriate level of care, regardless of the location of the unit they are in,” Piedra said.