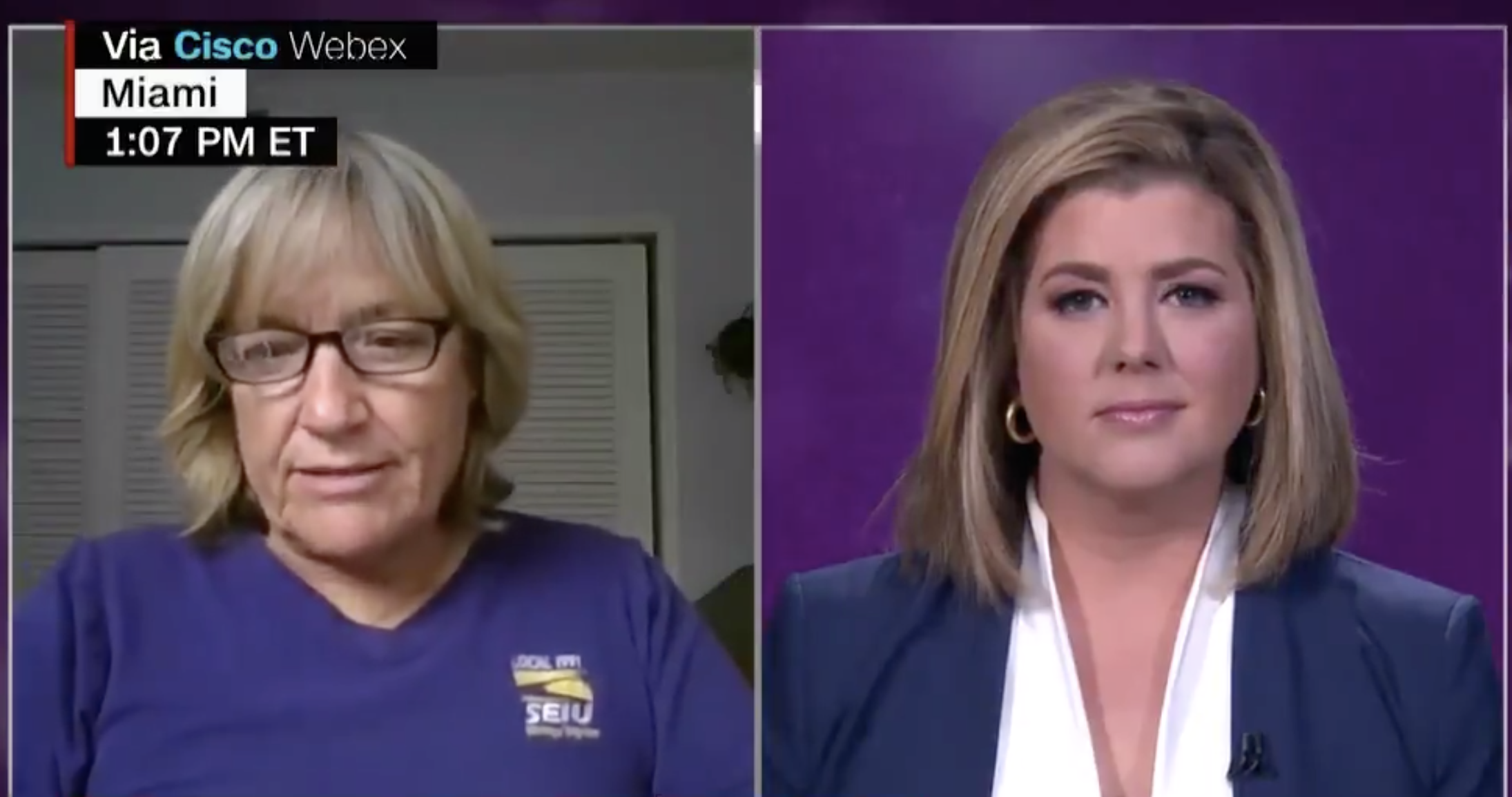 Martha Baker, a Florida nurse and head of a union that represents 5,000 health workers in the Jackson Health System in Miami, says that the ER at her hospital is getting “stressed to the max.”

“We thought, perhaps that we had dampened the curve and then obviously [this] month we’ve done nothing but continue to break records day after day, embarrassingly enough,�� Baker told CNN’s Brianna Keilar.

“It’s hard on our nurses. It’s hard on all the caregivers inside the hospital. They need a break. It’s been since March. People are near exhaustion and we’re running out of beds, nurses and caregivers,” she added.

Baker said that she is grateful for the additional 100 nurses that came down from across the country to help their stressed health system. They are asking for 100 more nurses now.

“When I was talking to one of our physicians and he was saying, ‘They’re everywhere. The Covids are everywhere.’ You come in for abdominal pain thinking, perhaps, it’s your appendix and they test and you’re Covid positive,” Baker said.

“The patients in the hallways, Covid positive everywhere. It’s hard to stay safe,” she added.

The mixed messaging about safety and reopening protocols coming from state and local leaders isn’t helping. Baker said that caregivers are “getting angry” at leaders for not standing up for them.

“I don’t know how [Florida Gov. Ron] DeSantis or other leaders in Florida or outside of Florida can ignore the science of this and it’s really unfair to, not only the patients in our community, but to the caregivers inside of our hospital,” Baker said.

Zimbabwe will impose a dusk to dawn curfew on its citizens as it tightens its coronavirus measures, the country's president Emmerson Mnangagwa announced in a televised address to the nation on Tuesday.

Business hours will be restricted between 8 a.m. and 3 p.m. local time. Only essential services are exempt from the restrictions.

The president warned that anyone who breaches the conditions or encourages actions that undermine the public health measures "will be liable and severely punished accordingly."

The announcement comes after Zimbabwe police arrested a prominent journalist as well as an opposition leader Monday, alleging the two incited fellow citizens to “participate in public violence.”

In a media statement, the police confirmed that Jacob Ngarivhume of Transformation Zimbabwe and Hopewell Chin’ono, a prominent journalist, were arrested, adding that, “the duo will appear in court soon and are currently in police custody.”

Ngarivhume is calling for nationwide protests on July 31 to push Mnangagwa’s government to fight corruption and a deteriorating economy under hashtag #ZanupfMustGo.

There were at least 447 new Covid-19-related hospitalizations recorded on Tuesday.

More than 500 women at a federal prison in Fort Worth, Texas, have tested positive for Covid-19, according to the Federal Bureau of Prisons.

The bureau says that Federal Medical Center Carswell has at least 509 inmates and 3 staff members currently infected with the virus –– that's more than 37% of the inmate population.

FMC Carswell, which is an administrative security medical center with a minimum security satellite camp in an adjacent complex, has 1,357 total inmates, with 1,119 at the FMC and 238 at the camp.

Increased testing at the facility started July 1, according to a statement from the Bureau of Prisons to CNN. Inmates are having temperatures taken twice a day and are receiving assessments for symptoms, which helps in slowing the transmission, according to the statement.

Some context: The only other facility run by the bureau with more positive tests is Federal Correctional Institution Seagoville, outside of Dallas, which shows nearly 63% of its population currently Covid-19 positive, according to the numbers posted on Monday.

Of the 1,798 minimum-security inmates, there are currently at least 1,132 positive cases and 9 staff members who are positive. Mass testing at FCI Seagoville began at the end of June, the Bureau of Prisons said in a statement sent to CNN.

The Bureau of Prisons said in a statement that they are “carefully monitoring the spread of the Covid-19 virus. As with any type of emergency situation, we carefully assess how to best ensure the safety of staff, inmates and the public.”

Vice President Mike Pence said he “wouldn’t hesitate” to send his kids back to school if they were younger, but didn’t elaborate on how schools could prevent kids from catching the virus and spreading it to others.

“I can tell you with my wife seated right here,” Pence said at a news conference in South Carolina, “if our kids were elementary school age, or high school or college, we wouldn’t hesitate to send them back to school. Because I’ve been looking at this data every day, and I’d encourage any American, any parent in particular to do the same. Because children without a serious underlying condition have a very low risk of serious outcome of the coronavirus.”

“There’s larger implications,” Pence admitted, “but to answer your question very specifically, I wouldn’t hesitate to send my kids back to school.”

Asked about the risk to parents and others if children bring the virus home, Pence said the administration was “supporting efforts at the state level and with local schools to do everything in our power to see that that never happens.”

He did not elaborate on how that could be achieved.

Jennifer Rakeman, the assistant commissioner and laboratory director for the New York City Public Health Laboratory, said Tuesday that the lack of a national coronavirus testing strategy amid supply shortages and increasing demand for testing has contributed to the delay in test results across the nation.

Rakeman addressed the fact that people are waiting up to two weeks for test results, at which point a person could have finished their quarantine and contact tracing would be moot.

“That test that takes two weeks to get a result back was a test that shouldn't have been done,” said Rakeman during an Alliance for Health Policy Summit Tuesday. “Really anything much longer than outwards of 48 hours is not a useful test.”

Jurisdictions have been left to their own devices, she said, resulting in a distribution of testing access that does not meet the needs of many communities.

“We are working in a system that has been weakened by decreased funding and support, and we have had to rebuild, as we respond,” Rakeman said. “The rapid increase in cases and unprecedented hunger for testing has left labs in a place where we cannot keep up.”

“We need a national testing strategy, so that the limited testing resources we have can be used effectively, so that testing turnaround times can be decreased, so that contact tracing can happen in real time, and so that Covid-19 patients and their contacts can isolate and transmission of the virus can be stopped," she said.

Since the beginning of the pandemic, a total of at least 7,755 people have died as a result of the virus in California.

Hospitalization rates and those in the intensive care unit are again reaching highs with increases of 1.9% and 0.7% respectively.

California’s positivity rate over the past two weeks stands at 7.5%, which is slightly under the state’s goal of remaining below 8%. More than 6.5 million tests have been performed to date.

Note: These numbers were released by the CA Department of Public Health, and may not line up exactly in real time with CNN’s database drawn from Johns Hopkins University and the Covid Tracking Project.

Tailored Brands, the owner of menswear chains including Men's Wearhouse and JoS A. Bank, announced Tuesday it will shutter stores and reduce staff as its business suffers due to the pandemic.

The company detailed plans in a statement to eliminate about 20% of its corporate workforce and close up to 500 stores as it deals with a "challenging retail environment."

“Unfortunately, due to the COVID-19 pandemic and its significant impact on our business, further actions are needed to help us strengthen our financial position so we can navigate our current realities," said Tailored Brands President and CEO Dinesh Lathi. "While today’s announcement is a difficult one, we are confident these are the right next steps to protect our business and position us to more effectively compete in today’s environment.”

Tailored Brands had 1,450 stores as of February 1, according to a public filing. It did not reveal which locations could be closed.

Last week, Tailored Brands disclosed to investors it was at risk of bankruptcy or even shutting down operations because of the Covid-19 crisis.

Austria will once again make it mandatory for people to wear face masks in supermarkets, banks and post offices, Chancellor Sebastian Kurz announced at a news conference on Tuesday.

"In the past weeks, we recorded an increase of new corona infections," Kurz tweeted after the briefing. He explained everyone should wear a mask "in order to protect vulnerable people."

During the briefing, Kurz emphasized how face masks can influence behavior, saying "the more they disappear from our everyday life, the more careless people become."

Since June 15, masks have not been mandatory in Austria apart from on public transport, in hospitals, pharmacies and hair salons. The measure making it mandatory for mask to be worn in supermarkets, banks and post offices will go into effect on July 24.

The country’s total Covid-19 death toll stands at 710, with a total of 19,827 recorded cases, according to Johns Hopkins University.

Austria — seen as a success story in Europe — went into lockdown in mid-March and lifted many of its measures at the end of April. Kurz said on April 19 that the coronavirus outbreak in Austria was "under control." He credited the positive development as a result of the government's early implementation of strict containment measures.

"We were one of the first countries in Europe which decided to have a complete lockdown, and I think it was extremely important that we were faster than others and our reaction was tougher than in other countries," Kurz told CNN's Fareed Zakaria.

"It was good that we did it because now the situation in Austria is under control. We only have about 100 new infections every day," he added.

Austria also removed its coronavirus border controls on June 16, with some exemptions.