Walmart will require customers at all of its US stores to wear masks beginning today, becoming the largest retailer to mandate facial coverings as coronavirus cases continue to rise.

About 65% of Walmart's more than 5,000 stores, including its Sam's Club locations, are located in areas where there is a government mandate on face coverings.

"To help bring consistency across stores and clubs, we will require all shoppers to wear a face covering starting Monday, July 20," Walmart US chief operating officer Dacona Smith and Sam's Club chief operating officer Lance De La Rosa said in a blog post last week. "This will give us time to inform customers and members of the changes, post signage and train associates on the new protocols."

Although no federal mandate to wear a mask exists, the US Centers for Disease Control and Prevention says everyone "should wear a cloth face cover when they have to go out in public." The CDC said "face coverings are meant to protect other people."

Walmart said it will enforce the new policy by stationing "health ambassadors" near the entrance to remind shoppers of the requirement.

Some background: Other national chains have made similar moves as Walmart. Kroger and Kohl's announced they would start requiring all customers to wear masks, signaling that more retailers are lining up behind mask-wearing mandates. The National Retail Federation, the main lobbying group for the industry, also called on retailers to require masks for customers.

Most major retailers and grocers initially hesitated to enact their own mask mandates for customers during the pandemic, partly over fears of antagonizing shoppers who refuse to wear them. Retailers have said they are reluctant to put their employees in the position of enforcing mask requirements.

The Trump administration has been engaged in discussions on the next stimulus bill for the past week, but negotiations will start "in earnest" today on Capitol Hill, the White House said.

Where Republicans stand: GOP senators CNN has spoken to say the plan is to present the pieces of the GOP proposal at the closed-door Senate GOP policy lunch. The proposal itself would be released publicly sometime midweek.

Senate Majority Leader Mitch McConnell has stuck to a simple framing for the forthcoming GOP proposal for weeks: it's about jobs, kids and health care. It's messaging, sure, but it also encapsulates the stated approach for each of the committee chairs who drafted pieces of the bill.

What the Democrats want: Democrats already have their proposal on the table — the $3 trillion House-passed measure known as the Heroes Act. Senate Minority Leader Chuck Schumer has made clear that's what Democrats will be fighting for in the negotiations — and that any talks must include House Democrats.

As one Democratic senator told me this weekend: "The onus is on them. We've been clear about where we are and how crucial it is that this be taken seriously for months. We're here and have been her. It's time for them to get in the game."

Remember: The time window is tight, but get ready for a slog. Democrats and Republicans are far apart on central details, but the impetus to get something done, while not unanimous as it largely was in March, is still quite palpable. But the road between now and Trump signing something into law is filled with hurdles, road blocks and potential pitfalls.

"Yes, we are having increased cases, predominantly in the sunbelt,” Admiral Brett Giroir told Alisyn Camerota on CNN’s New Day Monday. “We are having more cases that we did a week ago, two weeks ago, three weeks ago, four weeks ago – that is very clear,” he added.

Giroir, a member of the White House coronavirus task force, said he would like to point out that there are probably fewer cases compared to April because of more testing, but “there is no question we are having a surge right now. We are approaching this with extreme seriousness.”

According to Giroir, US Centers for Disease Control and Prevention teams have been sent into every state, surge teams have visited 19 sites, surge testing is happening and medical professionals are being deployed across the country.

“It really is all hands on deck,” he said. “This is serious, but we know how to stop this.”

Giroir said that masks, physical distancing and hand washing are all incredibly important.

As US cities and states navigate their next steps to combat the rapid spread of Covid-19, unwanted records keep getting smashed.

Here are some hotspots that broke records over the weekend:

Meanwhile, at least 31 states are seeing an increase in new cases compared to the previous week. Here's a look at where cases are rising across the country: 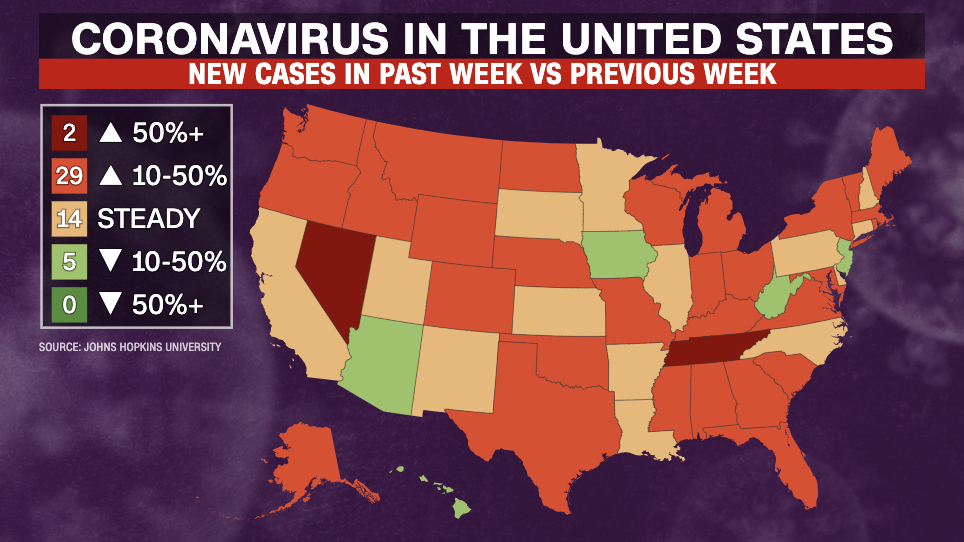 As of Monday morning, 9,362 people are hospitalized in the state of Florida due to coronavirus related illness, according to data released by Florida's Agency for Healthcare Administration (AHCA).

More than 3 million people in Florida have been tested for Covid-19, with at least 350,047 testing positive.

The overall positivity rate as of 7:30 a.m. ET today is 18.7% up from 18.2% on Sunday, according to the John Hopkins Coronavirus Resource Center.

Surgeon General Jerome Adams echoed President Trump, saying he does not think a national mask mandate is necessary, but at the same time urged all Americans to continue to wear face coverings.

“This administration really fights to protect our freedoms, but we want people to know freedom comes with responsibility and part of that responsibility means wearing a face covering when you go out,” Adams said in an interview on Fox News.

Asked about a national mask mandate, Adams said “in many cases we are letting the politics and the policy get in the way of the actual practice.” Adams said that the science shows that wearing masks will allow for America to reopen and stay open sooner.

The surgeon general said he believes a mandate would work better at a local and state level than a federal level because if there was a federal mandate, there would need to be a way for the federal government to enforce it.

“If you are going to have a federal mandate you have to have a federal enforcement mechanism and right now as scientist and an educator, I would rather help people understand why they should cooperate with wearing a mask and how they benefit from it, versus just simply saying we are going to force you to do it, particularly by sending in federal troops or using federal mechanisms,” Adams said.

What Trump has said: In an interview with Fox that aired Sunday, President Trump said he does not feel a national mask mandate is necessary because he wants people to “have a certain freedom”

Trump said over the weekend that he does not believe the disease will go away if everyone wears masks.

The novel coronavirus has infected 14.5 million people worldwide and killed at least 606,000, according to the Johns Hopkins University tally. Here's the latest on the Covid-19 pandemic.

India cases surge: The country has recorded 40,425 new virus cases in the past 24 hours, the highest daily increase since the outbreak began.

Brazil's leader greets supporters despite being positive for Covid-19: Jair Bolsonaro took a walk on the grounds of his presidential palace Sunday and greeted crowds despite his diagnosis. Supporters were separated from the President by a small water canal, but two people crossed over to his side. One man helped another, who appeared to have a physical disability, walk close to the President for a greeting.

Demonstrators protest mask law in London: Hundreds of people gathered in the city on Sunday to protest against the wearing of face masks, days before it becomes mandatory to wear them in stores in England.

Xinjiang capital in "wartime" lockdown: A "wartime" state has been declared in the capital of Xinjiang, home to China's persecuted Muslim-majority Uyghur ethnic group, after 17 local infections were recorded on Sunday.

The China Film Administration announced late last week that movie theaters in "low-risk" areas could reopen from Monday with a few precautions. Audience members are required to wear masks and take temperature checks, and cinemas are expected to operate at 30% capacity. Eating and drinking in the theater is also prohibited.

The "low-risk" requirement effectively means that most of the country should be able to reopen cinemas, according to the Global Times, a state-run tabloid.

The Chinese film "A First Farewell," about a boy from Xinjiang, along with the 2017 Pixar film "Coco" and the Chinese thriller "Sheep Without A Shepherd" grossed the most in pre-sales, according to the Global Times.

China is home to a huge movie industry that generated more than $9 billion in box office sales last year — second only to the United States.

Hundreds of demonstrators gathered in London on Sunday to protest against the wearing of face masks, days before it becomes mandatory to wear face coverings in stores in England.

A small crowd descended on Hyde Park in central London to voice their opposition to masks after Prime Minister Boris Johnson announced it will become compulsory to wear them in shops from Friday.

Some protesters waved placards referring to masks as "mind control" devices, while others were pictured promoting baseless conspiracy theories including the flat earth theory and a supposed link between 5G and Covid-19. Several demonstrators wore masks to illustrate their opposition to face masks.

The gathering was organized by a group called Keep Britain Free, which claims on its website to support: "Freedom of speech, choice and thought."

A number of studies have found that the coronavirus spreads mainly via airborne transmission and wearing a mask is the most effective way to stop person-to-person spread.