There are 49 hospitals in Florida with 0% ICU beds available, according to Florida's Agency for Health Care Administration website as of 3 p.m. EST Sunday.

Five of those hospitals are in Broward County, just north of Miami Dade, which now has an overnight curfew in place from 11 p.m. to 5 a.m. daily.

Broward saw about 10,000 new cases in a week and has a positivity rate hovering just under 17%.

Louisiana Gov. John Bel Edwards said in a tweet Sunday that the virus "is more rampant in Louisiana now than it has ever been."

"We now have a statewide epidemic, it is no longer one or two regions driving case growth," he added.

What the numbers look like: 3,119 new cases of coronavirus were reported since Friday, according to a series of tweets from the Louisiana Department of Health Sunday.

The total number of cases in the state is now at 91,706, a tweet from the agency said.

34 more deaths were reported for a total death count of 3,433 in the state.

The Louisiana Department of Health said Saturday that updates will be provided each day at noon except for Saturdays going forward.

Florida currently has 9,351 Covid-19 related hospitalizations, an increase of 189 since Saturday morning, according to the Agency for Health Care Administration (AHCA).

Miami-Dade County ICUs are at 127% capacity with 507 admissions and 398 bed capacity, according to data from the county. According to Miami-Dade County's daily summary, "this percentage represents the number of COVID positive patients utilizing hospital beds; does not include the 1,259 acute care and ICU beds that may be converted."

Arizona reported the highest death count in the state Saturday since the pandemic began, according to the Covid Tracking Project and data from Johns Hopkins University.

A total of 147 deaths were reported July 18, the data shows.

The previous one day record was 117 deaths on July 7, according to the Covid Tracking Project.

The positivity rate also remains high at a blistering 39.04% for July 18, according to the Arizona State University Biodesign Institute. The current 7 day average positivity rate is 24.24%.

There are at least 3,736,213 cases of coronavirus in the US, and at least 140,255 people have died, according to Johns Hopkins University's tally of cases.

New Jersey reports 144 new cases of Covid-19 and 11 additional deaths from the virus, according to a tweet from Gov. Phil Murphy.

One thing to note: The numbers listed were released by the state of New Jersey and may not line up exactly in real time with CNN’s database drawn from Johns Hopkins University and the Covid Tracking Project. 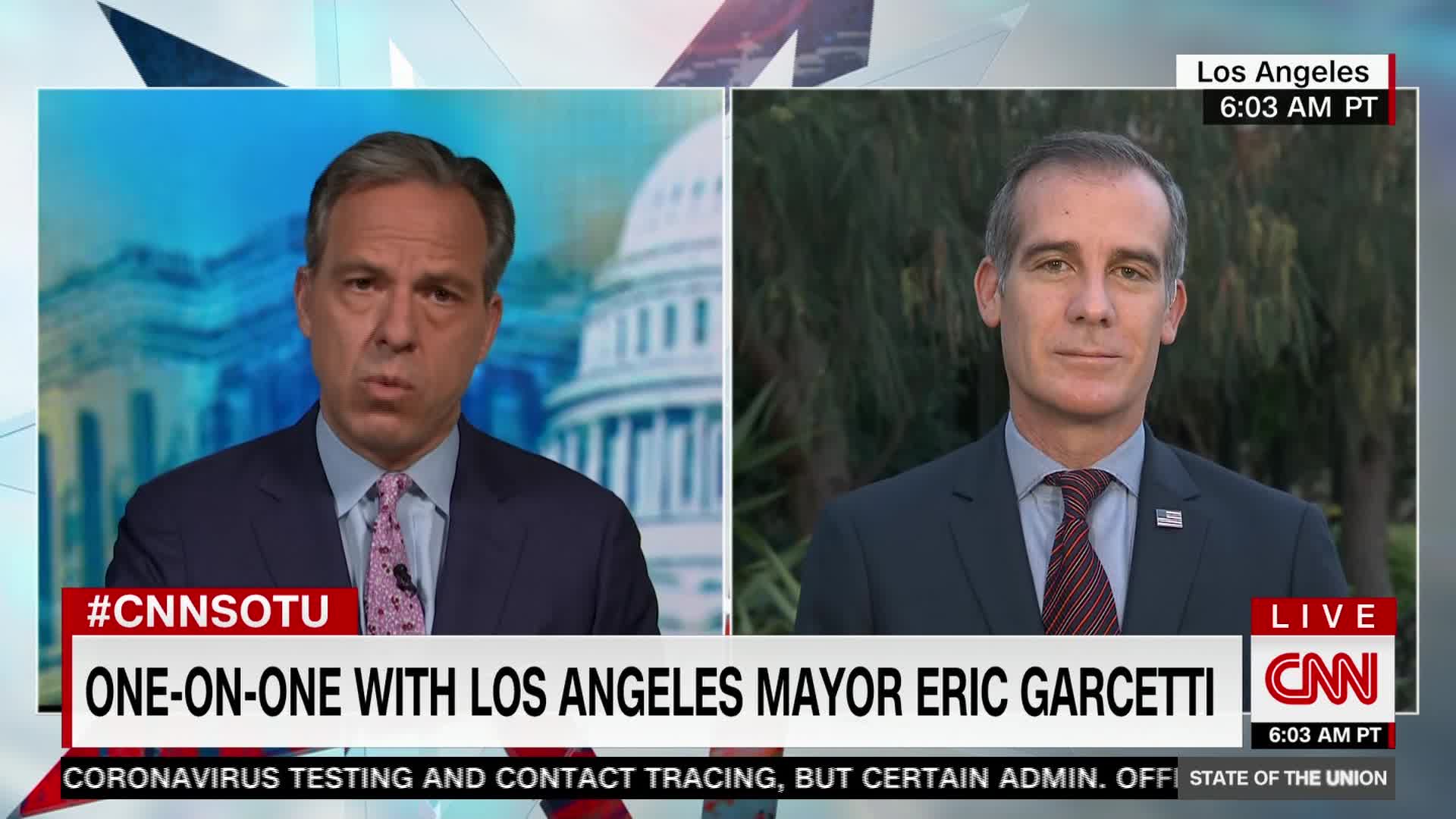 Los Angeles Mayor Eric Garcetti told CNN’s Jake Tapper that he is on the “brink” of reissuing a stay-at-home order for the city.

In an interview on CNN's State of the Union, Garcetti said on this issue that some openings happened too quickly, but not at the city level.

“Mayors often have no control over what opens up and doesn't. That's either at a state or county level. And I do agree that those things happened too quickly. But we are smarter, Jake, about this. It's not just what's open and closed. It's also about what we do individually.”

California has experienced a resurgence in the number of coronavirus cases. As of this morning, California reported over 380,000 cases and over 7,000 deaths.

When asked by Tapper at what point he would reissue a stay-at-home order, he did not indicate what specific measurements they would need to see, but said, “we haven't had the level of deaths. So, we're following those very carefully. Deaths have been pretty steady. Cases have gone up, but we also have the most aggressive testing.”

Indiana recorded 927 new cases of the novel coronavirus Sunday, just below its highest daily increase since the outbreak, according to the state's health department.

The state also reported two new deaths from the virus Sunday, bringing its death toll to 2,629.

This comes a day after Indianapolis Public Schools Board of Commissioners voted to push back the start date for public schools another two weeks to August 17.

Cancer has been added to the US Centers for Disease Control and Prevention’s list of underlying medical conditions that increase risk of severe illness from Covid-19.

“Revisions were made on July 17, 2020 to reflect recent data supporting increased risk of severe Covid-19 among individuals with cancer,” the CDC website says.

The increased risk applies to people of all ages.

The other conditions included on the list include chronic kidney disease, obesity, serious heart conditions and Type 2 diabetes.

They also list conditions that could lead to an increased risk of severe illness. These include asthma, cystic fibrosis and high blood pressure.

The CDC says it will continue to update information as more becomes known.