Admiral Brett Giroir, assistant secretary for health at the US Department of Health and Human Services and member of the White House coronavirus task force, on Tuesday conceded there are delays in Covid-19 tests results coming from big commercial laboratories, saying the demand is still very high.

"We absolutely want to reduce those times. We would like to get that to within 48 hours. And we are really exerting a lot of effort to do that," Giroir said during an interview on NBC’s "Today.”

Giroir explained the government is working with these laboratories to "actively start" pooling samples, and it will also lean into places that need a lot of testing, such as nursing homes, to do more point-of-care testing.

"That will alleviate millions of tests from those commercial labs," Giroir said.

Iraq on Tuesday recorded at least 2,022 new coronavirus cases, according to the country's health ministry.

This brings the total number of Covid-19 cases in Iraq to more than 81,700 according to the health ministry.

The health ministry also reported at least 95 new Covid-19-related deaths, bringing the total to at least 3,345 deaths across the country.

A new plan under development by the White House and Senate Republicans to deal with the fallout from the coronavirus pandemic is expected to include financial incentives to push schools to reopen while also shielding health care workers and companies against lawsuits, Republicans said Monday, a move that will spur a fight with Democrats.

This liability protection is essential, according to Senate Majority Leader Mitch McConnell, but House Speaker Nancy Pelosi said it would remove responsibility from employers and institutions.

Senate GOP leaders and senior administration officials have been privately trading proposals and exchanging plans before formally introducing a Republican proposal as soon as next week, with just three weeks before Congress adjourns for its summer recess.

The measure, expected to cost around $1.3 trillion, would amount to the GOP's latest response to the crisis  — after roundly dismissing House Democrats' $3 trillion-plus plan that passed their chamber two months ago.

But to get to Trump's desk, it would require the two parties in both chambers to resolve major differences — over the size and scope of the plan as well as the details in it — in the heat of an election year, meaning many are skeptical a deal can be reached with the number of days dwindling before the August recess.

"We're obviously out of session this week, but when my members come back next week we'll start socializing it with them, begin to discuss it with the Democrats and start the legislative process," McConnell said in Corbin, Kentucky, on Monday. "I think you can anticipate this coming to a head sometime within the next three weeks, beginning next week."

The GOP measure expected to provide aid to businesses, hospitals and schools in an effort to jumpstart the economy with millions still out of work.

But even before it's introduced, it is already prompted an outcry from Democrats, who contend the measure is far smaller in scope than what's needed and is expected to include measures their party won't accept.

Remember: Some of America's largest school districts say they won't resume in-person classes at the start of autumn, despite Trump's calls to reopen.

French President Emmanuel Macron said he is “in favor” of making wearing face masks mandatory in enclosed public spaces to limit the spread of coronavirus, adding during a televised interview that the measure could be enforced as early as August 1.

"I would like to make masks mandatory in all enclosed public spaces," Macron said Tuesday following France’s Bastille Day ceremony.

"There are risks that [the outbreak] could be starting again and we need to be prepared,” he added, recommending that “all citizens wear masks as much as possible, outside as well as inside.”

The president’s remarks come just a day after the UK government announced that wearing face masks in shops and supermarkets in England would become compulsory starting July 24.

Admiral Brett Giroir, assistant secretary for health at the US Department of Health and Human Services, said Tuesday that US health officials are "very concerned" about the Covid-19 outbreak, but some early indicators point to "some early light at the end of this tunnel."

During an interview on "Today" on NBC, Giroir, who is a member of the White House coronavirus task force, said that the government's response to the current outbreak is better than when the pandemic first started. "We are in a much different place now than we were several months ago – [a] much better place," he said.

"But we're still very concerned. Because as hospitalizations go up, we would expect deaths to also go up. Even though we're turning the corner on the current outbreak, and it looks – all indications are that we have that, we won't see the benefit in hospitalizations and deaths for at least another couple weeks," Giroir added.

Giroir reiterated some early indicators – including positivity rates leveling off and visits to the ER going down in some of the hotspots – show that the country may be turning a corner on the current outbreak, with the help of social distancing measures and wearing masks.

"None of us feel comfortable, nobody is doing a victory lap. We are all very concerned, all hands on deck in the field," Giroir said. "This doesn't mean we've turned the corner, and I want everybody to really understand. You've got to physically distance, wear your mask, avoid bars, close bars in those hot areas, reduce restaurant capacity. If we keep doing those things, these early indicators will turn into successes for us. We are not there yet but we are seeing some early light at the end of this tunnel."

Latin America and the Caribbean have now recorded more coronavirus deaths than the US and Canada, a CNN analysis of Johns Hopkins University data shows.

As of Tuesday, Latin America and the Caribbean have reported at least 146,515 deaths due to Covid-19. The United States and Canada combined have recorded at least 144,451 coronavirus deaths.

Remember: The region includes other countries and territories, but they have had few or no coronavirus deaths.

Clarification: The headline has been updated to replace “North America” with “US and Canada.” 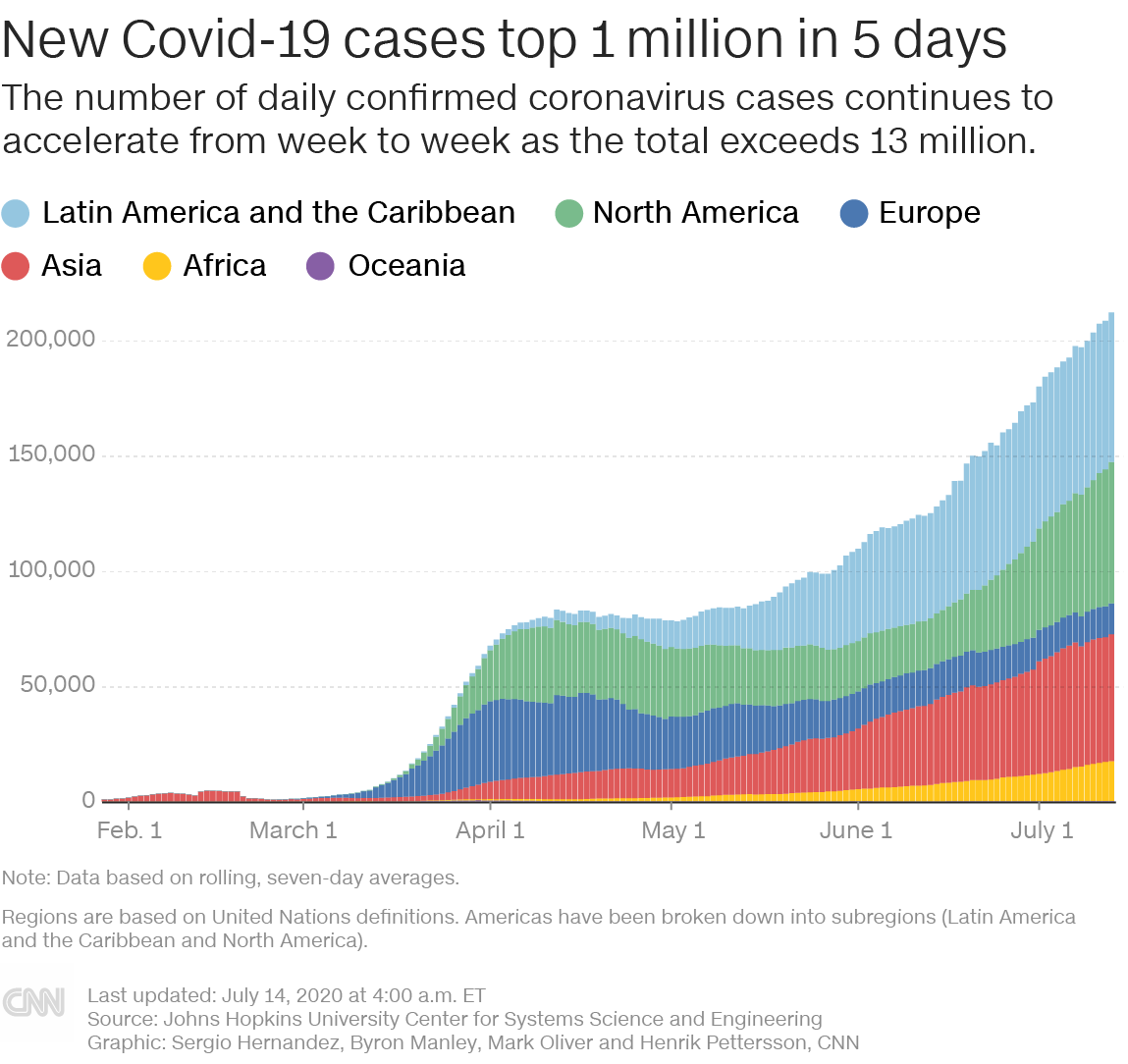 Coronavirus cases soared by more than a million globally in just five days as the numbers continue to accelerate from week to week, according to figures from Johns Hopkins University.

While some countries that were hit early in the outbreak have managed to contain the virus, the number of cases globally has been accelerating fairly steadily.

There have now been more than half a million deaths from the virus worldwide, according to JHU data.

The World Health Organization's director-general on Monday warned there would be "no return to the old normal for the foreseeable future."

Tedros Adhanom Ghebreyesus told a media briefing in Geneva that there were no shortcuts out of this pandemic, and that while we may hope for an effective vaccine, there must be a focus on using the tools that are available now to suppress transmission and save lives.

"We need to reach a sustainable situation where we do have adequate control of this virus without shutting down our lives entirely, or lurching from lockdown to lockdown," Tedros said.

Wearing face masks in shops and supermarkets in England will be compulsory from July 24, with those failing to comply with the new regulation facing fines of up to £100 ($125), the UK government was set to announce Tuesday.

"There is growing evidence that wearing a face covering in an enclosed space helps protect individuals and those around them from coronavirus," a Downing Street spokesperson said.

"The Prime Minister has been clear that people should be wearing face coverings in shops and we will make this mandatory from July 24."

The new measures come as a report from the Academy of Medical Sciences warned that the UK must now prepare for a potential new wave of coronavirus infections in the winter more serious than the first, with a "reasonable worst-case scenario" of 119,900 Covid-related hospital deaths between September 2020 and June 2021.

The UK is one of the worst-hit countries by coronavirus, with almost 45,000 fatalities, putting it third behind Brazil and the United States.

The report's authors warn that Covid-19 is "more likely to spread in winter with people spending more time indoors and the virus able to survive longer in colder, darker winter conditions."

In the document, experts warn that "intense preparation" is urgently needed in the remaining summer months to reduce the risk of the health service being overwhelmed and to save lives this coming winter.

Scientists said that a combination of the possibility of a flu epidemic, a backlog of patients needing treatment and the disruption already created in the health system by Covid-19 posed a "serious risk to health in the UK." 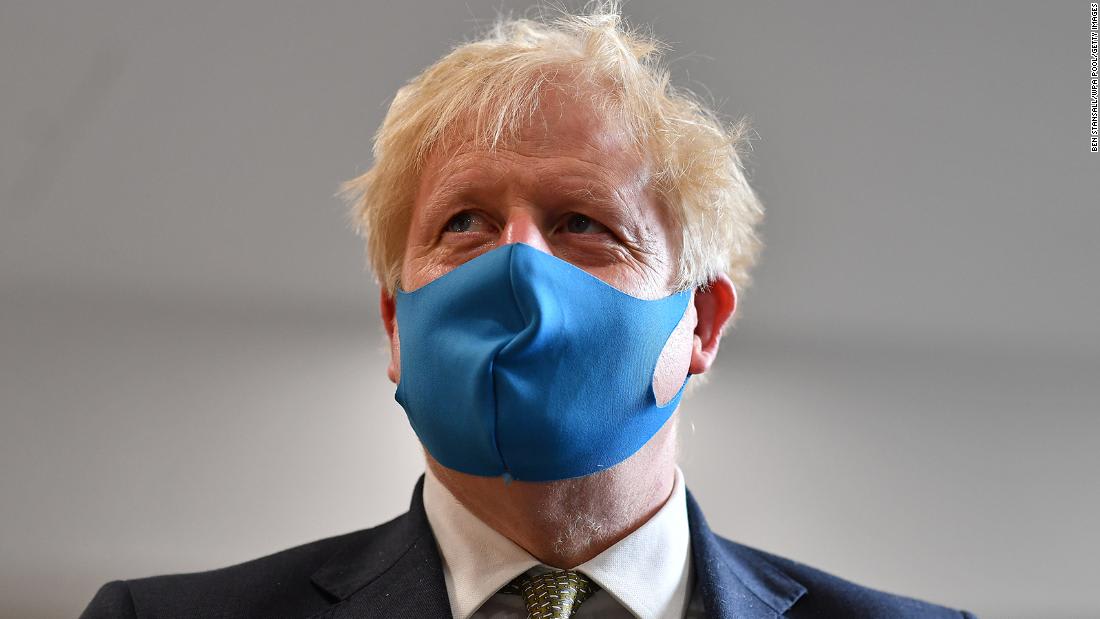 Face masks in shops to be compulsory in England

The shack sits just down a narrow dirt alleyway, visible from a main road in Khayelitsha, near Cape Town. This is where the suspected killer is alleged to have hidden the body of his girlfriend, packed in between a corrugated iron siding and a concrete wall, just feet away from where he lived.

Prosecutors say he put 36-year-old Sibongiseni Gabada's corpse in a bag and covered it with garbage.

Gabada was missing for two weeks before her body was found. Every day people would walk past, until finally the smell of decomposing remains became stronger than the stench of the trash piled on top.

"When the people asked what is going on there. He said, 'No, it is rubbish, I am going to throw it away.' That is the kind of person he was -- an animal," says Gabada's grandmother, Mavis Gabada.

She gingerly moves forward to stare at the spot, sobbing. "Why was my granddaughter killed like a dog?" she asks.

What's happening: Since South Africa's strict lockdown was lifted, Gabada's case is just one of scores of high-profile cases of gender-based violence against South African women and children to have come to light.

Read the rest of the report here: 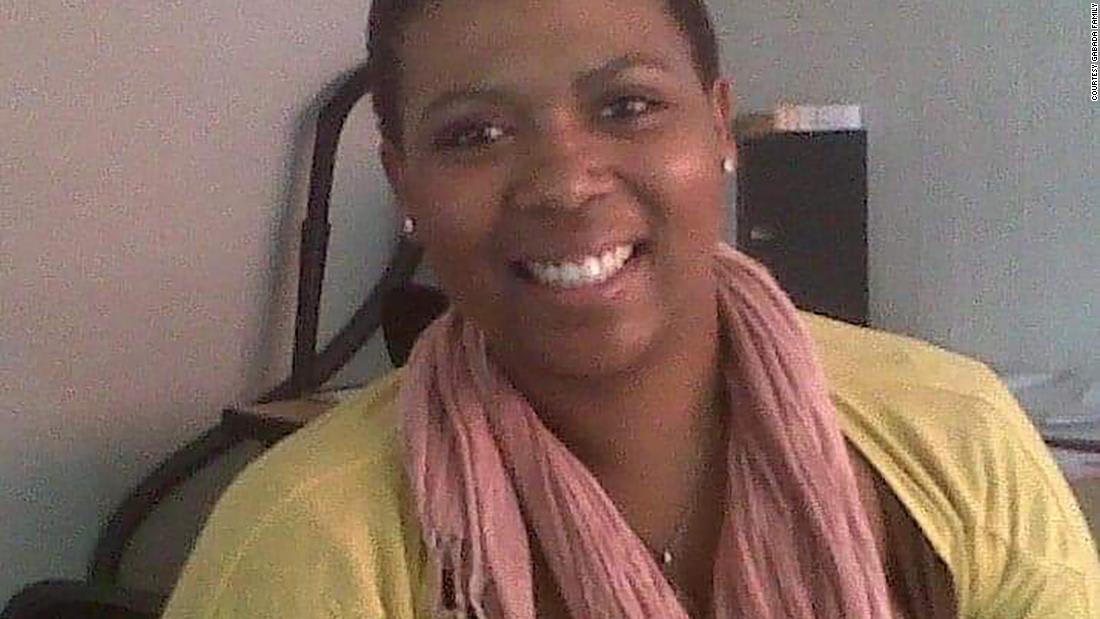