The South Carolina Department of Health announced the highest number of reported positive cases of Covid-19 in one day.

On Saturday, the state reported 2,239 cases, breaking the previous high number by 300 cases, according to the state's department of health.

“Today, we mourn the loss of one of our children to this virus. It is heart-wrenching to lose a child under any circumstances, and especially so during a time when we have all lost so much already,” Public Health Director Dr. Joan Duwve said. “Our state is in a dire situation and we will continue to mourn the loss of parents, grandparents, children, friends and neighbors until each and every one of us steps up to do what is right, not just for ourselves but for others. No one is immune to this deadly disease, but we each have the power to impact the path this pandemic takes in South Carolina." 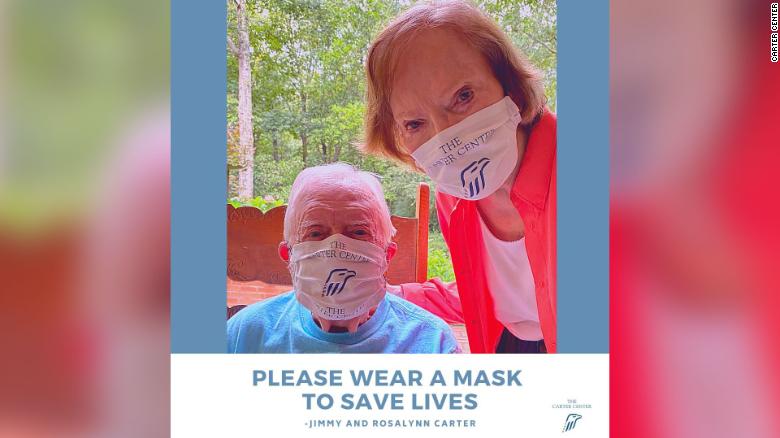 Former President Jimmy Carter and former first lady Rosalynn Carter on Saturday urged the American people to "please wear a mask and save lives" as the country continues to battle the deadly coronavirus.

The couple's Atlanta-based charity, the Carter Center, posted a photo on Twitter Saturday of the pair wearing white masks printed with the center's logo. The picture was paired with the straightforward plea.

Some context: Masks have become a political flash point as some Americans argue the requirement infringes upon their civil liberties.

But the US Centers for Disease Control and Prevention urges everyone to wear a "cloth face cover when they have to go out in public," noting that masks are critical "in case the wearer is unknowingly infected but does not have symptoms."

Pennsylvania has reported 813 new Covid-19 cases and 17 additional deaths from the virus, according to a news release from the state’s health department.

To note: The figures listed were released by the Pennsylvania Department of Health and may not line up exactly in real time with CNN’s database drawn from Johns Hopkins University and the Covid Tracking Project.

There have been a total of 4,197 deaths reported, the DOH said. Daily case count data does not appear to be effected by the error.

Hospitalizations dropped below 800 for the first time since March 18, Cuomo said.

Of the 69,203 tests conducted in New York yesterday, 730 were positive, according to the release.

New York City hovered over a 1% positivity rate for Wednesday, Thursday and Friday.

“I urge residents to stay New York tough and not give up the ground we've worked so hard to gain together, particularly in the face of rising cases throughout the country and compliance issues here at home," Cuomo said.

The Houston Astros have canceled Saturday’s team workout at Minute Maid Park as a “precautionary measure” after a staff member was potentially exposed to Covid-19 outside of the organization.

“Out of an abundance of caution, we have cancelled today’s workout. We are working closely with MLB and our team physicians to follow the established testing and cleaning protocols so that we can safely bring our players and staff back to the field as soon as possible," general manager James Click said in a statement,

Some context: This news comes a day after Major League Baseball’s announcement that 1.8% of team personnel had tested positive for the coronavirus in the final intake screening through July 9.

Houston opens the 2020 season at home against the Seattle Mariners on July 24 at Minute Maid Park.

A Miami-Dade County bus operator, who was last on the job in late June, has died after testing positive for Covid-19, according to a news release from Miami-Dade Department of Transportation and Public Works (DTPW).

"DTPW mourns the loss of one of our very own front-line workers," the release said.

The bus operator "was working in June before testing positive" for Covid-19, said communications director Ileen Delgado in a correction to the initial release.

"A total of 44 bus operators have tested positive for Covid-19 from June 21 through July 9. All of them are quarantined on paid leave," DTPW spokesperson Luis Espinoza told CNN.

It is not clear if the bus operator was symptomatic or what route this person drove.

There are a total of 7,063 patients hospitalized in Florida with coronavirus, according to new data released by the Agency for Health Care Administration on Saturday.

Miami-Dade County currently has 1,601 patients hospitalized; the most hospitalized patients of any county in the state.

In Orange County, where Disney World reopens on Saturday, 475 patients are hospitalized. 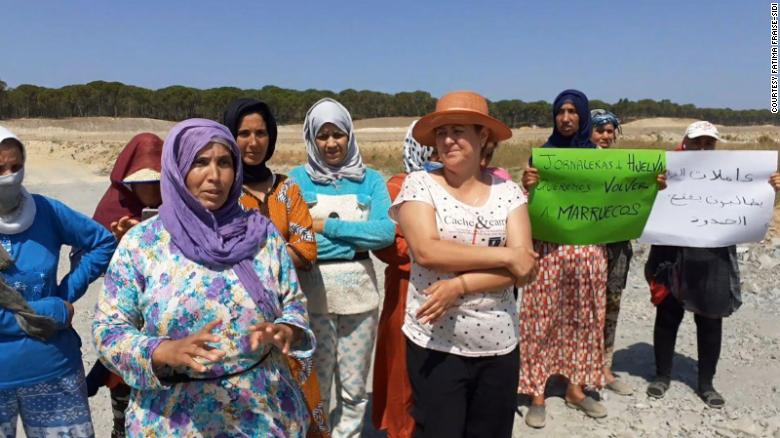 More than seven thousand Moroccans, most of them women, are stranded in Spain after their country closed its borders to curb the spread of the coronavirus.

They arrived in Spain to pick fruit in March, sending their earnings back home to families, and were trapped when the season ended in May. Now, 7,200 people are in limbo in Spain's southern Huelva province with almost no money, according to a statement released earlier this week by a group of Spanish and Moroccan non-governmental human rights organizations, including local Andalusian group Mujeres 24h.

On Thursday, a group of 15 women staged a protest in in Cartaya, Huelva. The women, who work on one of the farms involved marched with banners demanding to be allowed to go back home.

"We are here without a job, we have nothing, the money we had we sent it to our family. We are out of money to eat, we need to go back. We ask [King] Mohammed VI to send someone to help us so that we can return," Fátima, one of the protesters, said, in a video of the protest obtained by CNN.

"Our children are alone in Morocco, they have nobody to take care of them, we need to go back," she said. A video of the protesters discussing their situation was obtained by CNN from an activist group.