The White House is set to focus on reopening the country’s schools amid the coronavirus pandemic on Tuesday. President Trump and the first lady are set to participate in an event at 3:00 p.m. ET labeled a "National Dialogue on Safely Reopening America’s Schools."

While the federal government is leaving reopening decisions up to state and local governments, the Trump administration will provide financial resources and share best practices as it strongly urges a return to school for what it says is the “holistic health” of the nation, despite rising cases currently in 31 states.

Administration officials briefing reporters Tuesday morning emphasized the importance of the nation’s “most vulnerable” students returning to school and the critical services schools provide, closely echoing the President’s rationale for reopening the country in that the cure can’t be worse than the disease in terms of social issues stemming from closures, saying school closure disruption has had “significant negative impact.”

“It’s important to consider schools as high-priority settings within the community given the unique and critical role they play in our society,” a senior administration official said.

The official continued, “The local context and needs of all school districts are unique, and as such, plans for returning to school should be tailored in a way that minimize the risk of Covid-19 spread while providing students with the critical services, academic resources, and social emotional supports that they need. CDC (Centers for Disease Control and Prevention) encourages school districts to make reopening plans that anticipate Covid-19 cases, minimize the risk of spread, and then limit the need for the potential of school closures.”

More on this: That official noted multiple times that the CDC “never” actually recommended in its guidance that schools close as the virus first arrived in the US earlier this year, saying those were “local jurisdictional decisions that were made.”

Pressed on concerns with spiking cases in various areas, the senior official said there are “a variety of different strategies that schools can adopt that really minimize the risk and can open these schools quite safely,” but declined to provide specific details on those strategies.

There is risk, the official said, that students and others in school settings get infected and “somehow then transmit that infection to someone who’s more vulnerable in the community,” adding that the administration will “double down on our commitment to protecting the vulnerable,” but declining to say how.

Mississippi Gov. Tate Reeves tweeted this morning that he and his family have tested negative for Covid-19 after saying that he came in contact with a legislator who may have been exposed to the virus on Monday.

“Limited contact with the people who were diagnosed, but better safe than sorry! If someone you know gets the virus, get a test!” Reeves wrote in his tweet.

Coronavirus cases across parts of the south and southwest are increasing so quickly that contact tracing isn’t possible any more, Dr. Peter Hotez, dean of tropical medicine at Baylor College of Medicine, told CNN’s Anderson Cooper Monday. Meanwhile, at least 24 states have paused their reopening plans and at least 31 states are seeing an increase in new cases compared to the previous week.

In Florida, a new record was set for most coronavirus cases in the US in a single day on Saturday, with a total of 11,458, according to data compiled by Johns Hopkins University, and on Sunday, the state surpassed 200,000 total Covid-19 cases. Miami-Dade County, which has become the epicenter of the virus in that state, is seeing a surge in hospitalizations.

In the past 13 days, Miami-Dade County, which includes the city of Miami, has seen a staggering increase in the number of Covid-19 patients being hospitalized (90%), in the number of ICU beds being used (86%) and in the use of ventilators (127%), according to the latest data released by Miami-Dade County government. The 14-day average positivity rate in the county is 23%, according to data released by the county government.

Here's a look at the progression of total cases in Florida, according to Johns Hopkins University data: 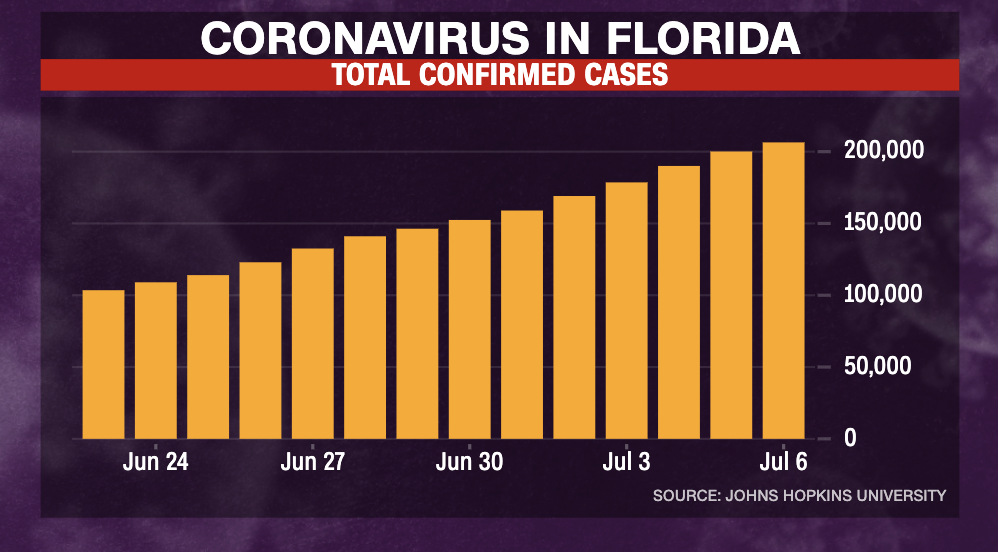 Texas reported 5,318 new Covid-19 cases on Monday, bringing the total number of cases in the state to at least 200,557, with 2,655 deaths in the state, according to numbers released by the Texas Health and Human Services. The state's highest daily number of new cases on record was reported on July 4  — 8,258.

Here's a look at the progression of total cases in Texas, according to Johns Hopkins University data: 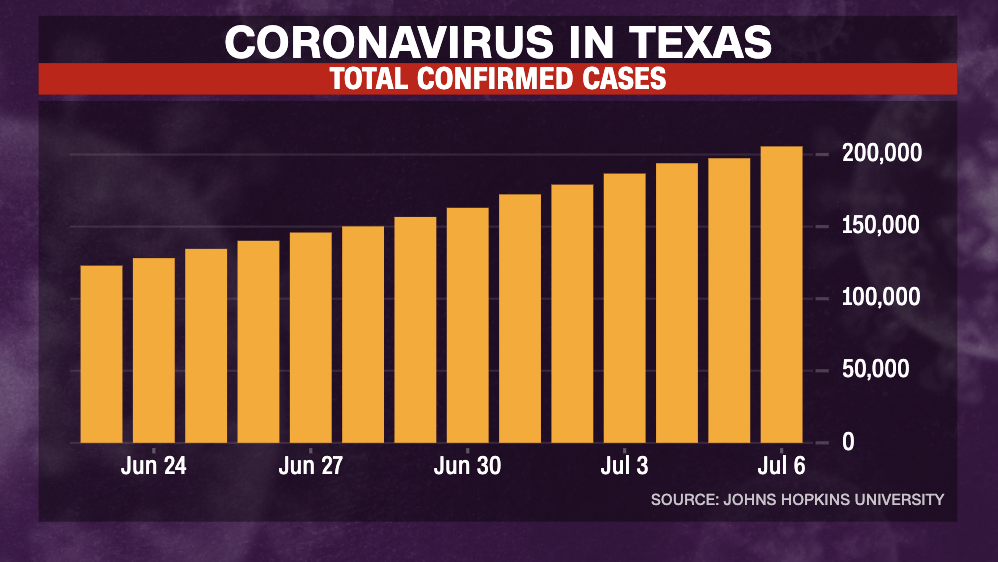 Arizona surpassed 100,000 coronavirus cases yesterday, according to the state's Department of Health. More than 62,000 of the 101,441 reported cases are in people younger than 44 years old. Covid-19 hospitalizations have increased in the state, with more than 3,200 Covid-19 inpatients and over 800 ICU patients currently reported in Arizona hospitals.

Here's a look at the progression of total cases in Arizona, according to Johns Hopkins University data: 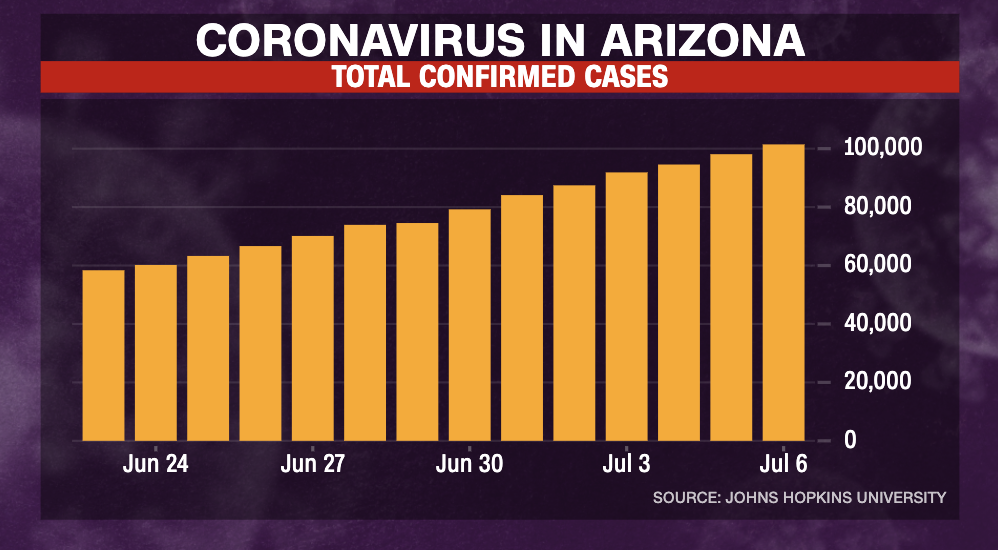 Dr. Anthony Fauci, director of the National Institute of Allergy and Infectious Diseases, predicted last week that the United States could see 100,000 coronavirus cases a day, short of a serious mitigation effort.

“We're approaching that, so this is a public health crisis for our nation,” Hotez said.

Here's a look at how the progression of total confirmed cases in the three states compares: 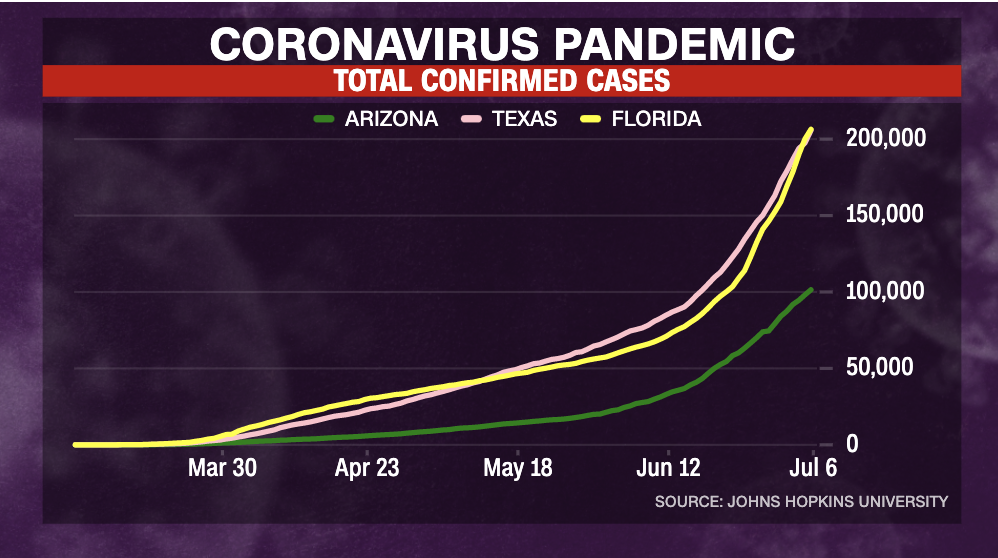 This comes hours before he leaves for Washington, DC, where he will meet President Trump at the White House on Wednesday.

"I took the coronavirus test; I didn't have symptoms, that's why I haven't done it before because I listen to the experts, Mexico’s president said Tuesday, adding, “I decided to get tested because I'm going to travel, I have to be responsible, and luckily I don't have this virus. I'm bringing the COVID result with me."

He took the test Monday, which was the first time he publicly acknowledged taking a coronavirus test, previously saying he never needed to get tested because he never had symptoms.

López Obrador is traveling via commercial flight and has never used the presidential plane since taking office in December, 2018. This will be his first trip abroad as president.

US stocks opened lower on Tuesday, pulling back after the prior session’s rally that pushed the Nasdaq Composite to an all-time closing high.

With few catalysts to give the market direction, investors can’t hide from the rising number of Covid-19 infections across the country. Economists are warning that the resurgence of cases could delay the economic recovery.

The US Environmental Protection Agency has approved two Lysol products as effective against coronavirus when used on hard, non-porous surfaces.

The EPA announced Monday that Lysol Disinfectant Spray and Lysol Disinfectant Max Cover Mist meet the agency's criteria for use against coronavirus based on laboratory testing that found both products kill the virus two minutes after contact.

Why this matters: In a statement, the EPA explained that before companies can legally claim its products work against a certain pathogen, the agency must first authorize it based on a review of data.

Guidance issued in January in response to the outbreak allowed manufacturers to provide the EPA with data that shows a product's effectiveness against coronavirus. Based on this guidance and the agency's review of products, the EPA has a list of more than 420 products that meet the agency’s criteria for use against the virus, including several Lysol products.

Lysol said in a statement it is currently working on testing the efficacy of other disinfectant products against Covid-19.

"In the face of the pandemic, Lysol continues to work with a wide range of scientific and health experts to educate the public on the importance of hygiene," said Rahul Kadyan, executive vice president of Reckitt Benckiser in North America, Lysol's parent company.

Deaths from the Covid-19 epidemic in Iran hit a high record on Tuesday as 200 new deaths were registered over the past 24 hours, the highest since the virus outbreak in the country, state news Mehr reported.

Iran's Health Ministry Spokesperson Sima Lari said Tuesday during a daily press conference in Tehran that over the past 24 hours, 2,637 new cases of Covid-19 were reported, bringing the total number of infections in Iran to 245,688 and the country's total death toll has risen to 11,931.

Lari also said that: "Out of 2,637 detected cases, 1,455 have been hospitalized across the country."

The health ministry's spokesperson warned people to be more vigilant and everybody in general must avoid unnecessarily leaving their homes and wear facial masks indoors in public places including buses and subways.

Iranian President Hassan Rouhani has mandated the wearing of masks in public after coronavirus cases continued to rise in recent weeks.

He announced on Saturday that the wearing of masks would become compulsory in public spaces as of Sunday, July 5, according to the Iranian state news agency, IRNA.

In Florida, 43 hospital ICU’s in 21 counties have hit capacity and show zero ICU beds available, according to data released by the Agency for Health Care Administration (AHCA). This includes hospitals in the following counties:

Another 32 hospitals show ICU bed availability of 10% or less, per the AHCA data.

You can see the latest data on hospitals in your Florida County here.

President Trump is expected to travel to Doral, Florida, later this week, landing squarely in the center of a coronavirus hotspot and potentially taxing the already-limited local health resources.

Despite the raging coronavirus pandemic, Trump will turn his attention Friday to the issue of drug trafficking in South America, visiting US Southern Command for a briefing, a White House official confirmed to CNN. The trip was first reported by Politico.

Doral, where US Southern Command is located, is just under two miles from the President’s golf club. But it is also in Miami-Dade County, which is currently experiencing a coronavirus outbreak.

It has also seen a staggering increase in the number of ICU beds being used (86%) and in the use of ventilators (127%). The 14-day average positivity rate in Miami-Dade County is 23%, according to data released by county government.

Remember: A presidential visit – no matter who is in office – requires a significant amount of resources, with White House officials, White House Medical Unit representatives, and US Secret Service agents traveling in advance of the president to coordinate with local officials on the ground.

Here are some steps that are taken in preparation of a trip of this nature:

There is usually a trauma bay reserved for the President, but it’s possible that one is just designated rather than taken out of commission when a hospital is particularly taxed.

“We’re not going to displace any medical care to be on standby for the President, but if he goes there, there will be a significant impact to the hospital,” Wackrow said.

With additional reporting from Rosa Flores and Sara Weisfeldt