Erin Bromage, CNN contributor and biology professor at UMass Dartmouth, gave tips on how to keep your Independence Day gatherings as safe as possible this holiday weekend.

Bromage said that overall, people need to be vigilant, or cases will inevitably rise once again.

“I get a little bit afraid there's not a lot of moderation in the US public right now. It's sort of [either] people locking themselves away or going out and having parties like they did six months ago. We need moderation. … Be aware that there's still a threat out there, and if we let our guard down even for just one night, we go into the situation that we're seeing in Texas, that we’re seeing in Arizona,” he said.

Bottom line? “Keep your distance, keep it outside, wash your hands often, wear a mask when you can't distance,” he said.

People in West Hollywood who do not wear a face cover in public will now face a citation of $300.

“Our last option was to conduct enforcement by issuing an Administrative Citation, but the risk to Community health is too great,” said the bulletin.

West Hollywood is a city in Los Angeles county and patrolled by the L.A. County Sheriff’s Department.

The county has been reporting record highs of new Covid-19 cases. Yesterday, for the fourth straight day, more than 2,000 new coronavirus cases were reported in the county.

Scotland will implement a series of “local lockdowns” over the weekend in areas which have recorded an increase in new coronavirus cases, First Minister Nicola Sturgeon said Thursday.

The decision comes as Scotland prepares to lift the five-mile travel limit on citizens, as of Friday.

“The advice and guidance to people in the areas of Annan, Gretna, Dumfries, Lockerbie, Langholm and Canonbie is to continue to follow the five-mile travel restriction over the weekend, until the testing and contact tracing process has been completed and we are able to assess if the outbreak has indeed been contained,” Sturgeon said.

“We are very hopeful that this outbreak will be contained, and I should stress that there is no evidence at this stage to suggest otherwise,” she added.

Speaking during a news conference on Thursday, Sturgeon confirmed that 10 positive cases have so far been recorded in Annan and Gretna, and a “significant” number of contacts are being traced, she added.

Additionally, mobile testing units have been deployed to three separate workplaces with connections to positive cases in order to test staff members.

“Until contact tracing and testing has been completed…we must act on a precautionary basis,” Sturgeon said.

As of Thursday, Scotland has recorded a further five positive cases since Wednesday, bringing the total to 18,264.

Doctors and nurses at San Antonio’s Methodist Hospital are overwhelmed by the sharp increase in coronavirus patients — and are bracing for even more cases after the Fourth of July weekend.

“We are having an explosion of Covid. We aren't overrun yet, but it's overwhelming,” Covid ICU nurse manager Adam Sahyouni said to CNN’s Miguel Marquez. “...I would say that if you want to see August 1st, then maybe you should stay indoors and isolate on July 4th,” he added.

Pulmonary disease physician Dr. Jeffrey Dellavolpe said he’s lost track of how many patients with Covid-19 in their 20s are coming in.

“The last few weeks has just been overwhelming, is how I would describe it. There's been more and more patients than we really know what to do with. The patients are getting younger, and they're more sick,” he said.

Dellavlope said that he got 10 calls in one day of people who could be on a procedure to oxygenate blood and keep patients off ventilators, and he only had three beds available.

They're so sick if they don't get put on, they don't get that support, they're probably going to die. I had three beds. And making that decision, being able to figure out who really is going to benefit, it is a level of decision making that I don't think a lot of us are prepared for,” he said.

ER physician Dr. Jennifer Gemmill said patients are being held in the emergency department for hours or even days, due to the lack of available beds.

“I don't think that there was one specific incidence that really led to this spike. I think people after March and April were extremely frustrated with being inside, and as soon as those restrictions lifted, they wanted to get out. Some protected themselves, some didn't. And now we're just seeing the result of that,” Gemmill said.

As the country continues to battle the coronavirus pandemic and some states see growing cases, the unemployment rate fell to 11.1% as the US economy added 4.8 million jobs in June.

The data was far better than economists predicted. The unemployment rate also fell more than expected.

It was the second-consecutive month of growth after more than 20 million jobs were wiped out in April during the coronavirus lockdown. The reopening of the economy is easing the burden on America's stressed labor market.

But the US economy remains in a deep recession, and a full job market recovery is far from certain. America is dealing with a severe joblessness crisis and millions of people are relying on government aid to make ends meet.

The Department of Labor reported Thursday that 1.4 million workers -- more than expected -- filed for first-time unemployment benefits last week. Continued claims, which count people filing at least two weeks in a row, stood at 19.3 million, slightly more than the revised number of the prior week. 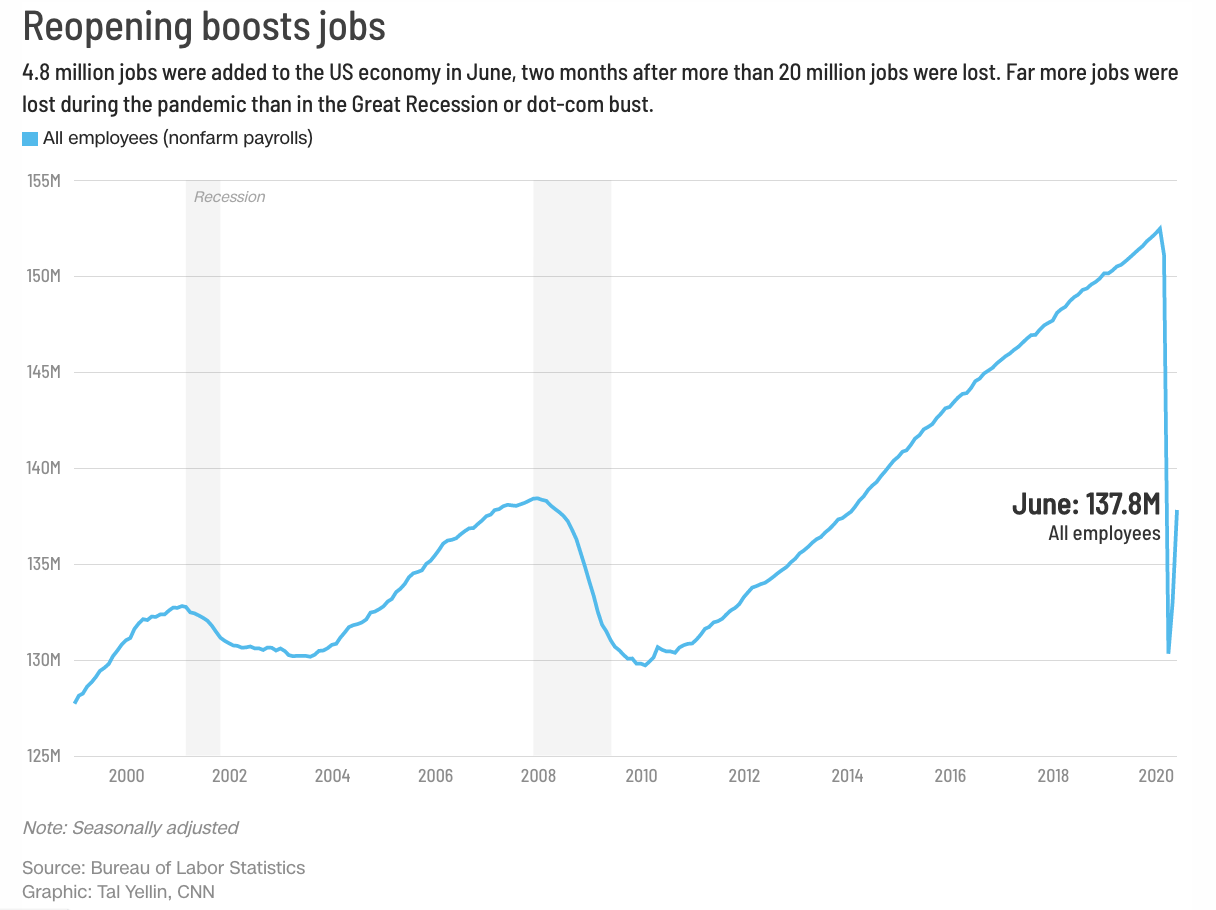 At least 12 states are seeing a rise in daily hospitalizations, the director of the US Centers for Disease Control and Prevention said this week.

The trend is worrying: A sharp increase in patients can once again overwhelm hospitals, putting critical resources including staffing, beds and ventilators in short supply.

Some hospitals are already so swamped they've transferred patients elsewhere, while others are taking steps to prepare for a coming surge.

The increases come weeks after many states began reopening their economies after extended closures intended to stem the spread of coronavirus. Meanwhile, at least 37 states across the country are seeing an increase in Covid-19 cases compared to the previous week, according to John Hopkins University data.

The relaxed measures fueled the rapid spread of the virus and an influx of new patients needing hospitalization, some doctors say.

"I live close to a beach, and you can see it's like a party every single day," says Dr. David De La Zerda, the ICU medical director and a pulmonologist at Jackson Memorial Hospital in Miami.

Among the states seeing an increase are Florida and Texas, which are expected to see nearly 2,000 new hospitalizations per day by mid-July, according to forecasts published by the CDC.

In Arizona and California, the forecasts project about 1,500 new patients each day in the next two weeks.

Arizona hospital beds are currently at 85% capacity and ICU beds are “only” at 88% capacity, Vice President Mike Pence said during a briefing in Phoenix on Wednesday. The state is also asking for 500 additional medical personnel to deal with what Pence called a “dramatic” surge in coronavirus cases in the state.

Here is a look at some of the latest hospitalization figures: 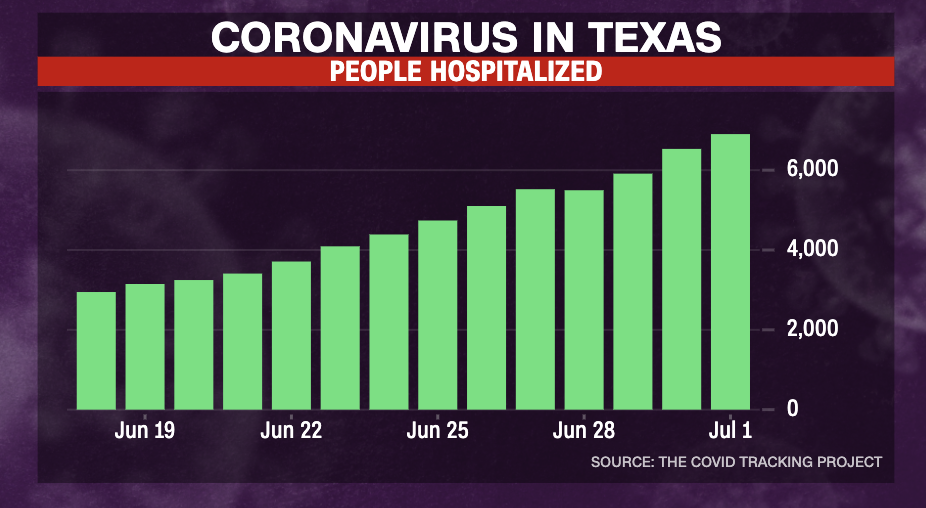 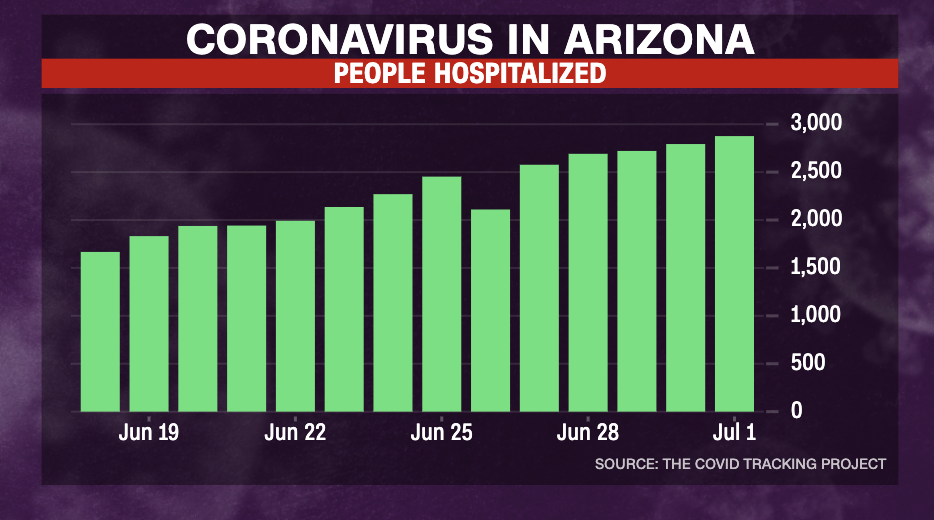 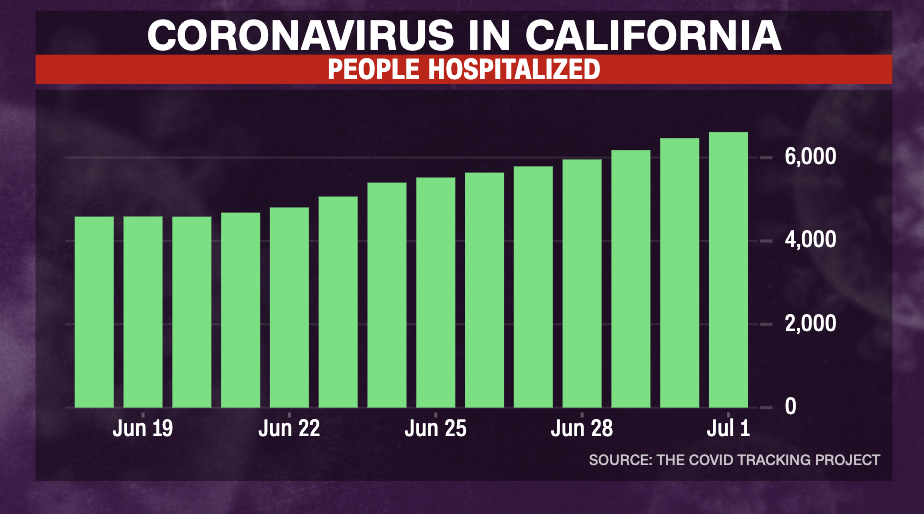 Some residents in the Atlanta area received a public safety alert on their phones this morning, during them to wear a mask when they're outside and to stay home when possible.

The alert from DeKalb County also urged people to "get tested!" Here's a look at the alert: 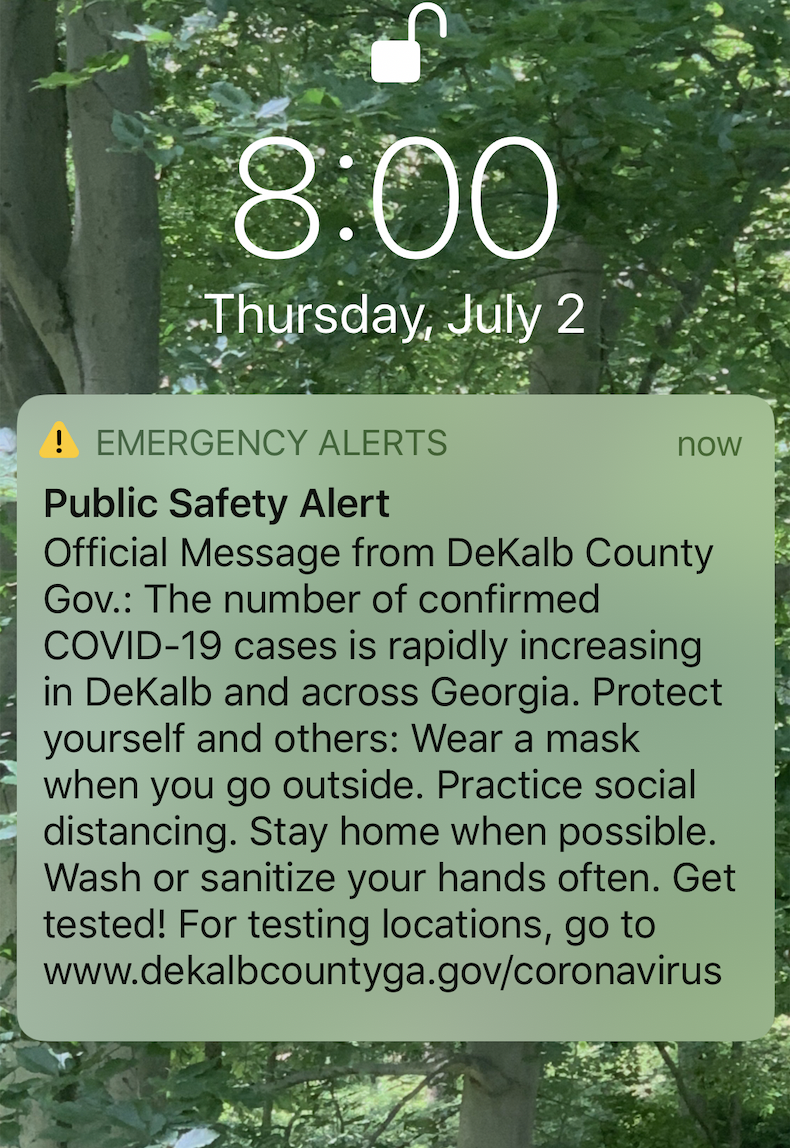 The safety alert comes as cases of coronavirus are rising across the state of Georgia. The state is one of 37 across the country seeing increases in coronavirus in the past week compared to the week before — and it's one of 10 reporting a greater than 50% increase in new cases. 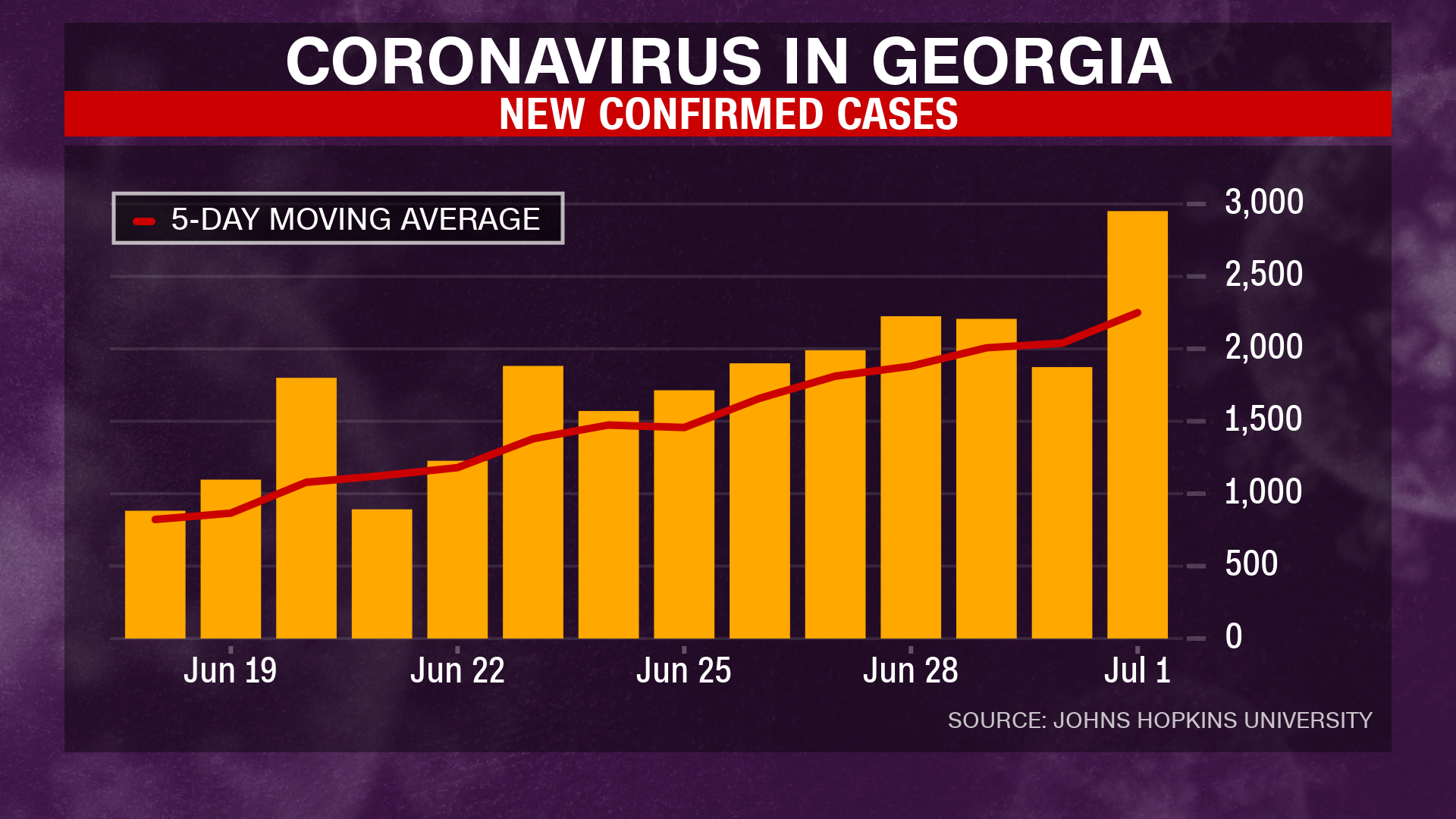 Hospitalizations across the state are also increasing. 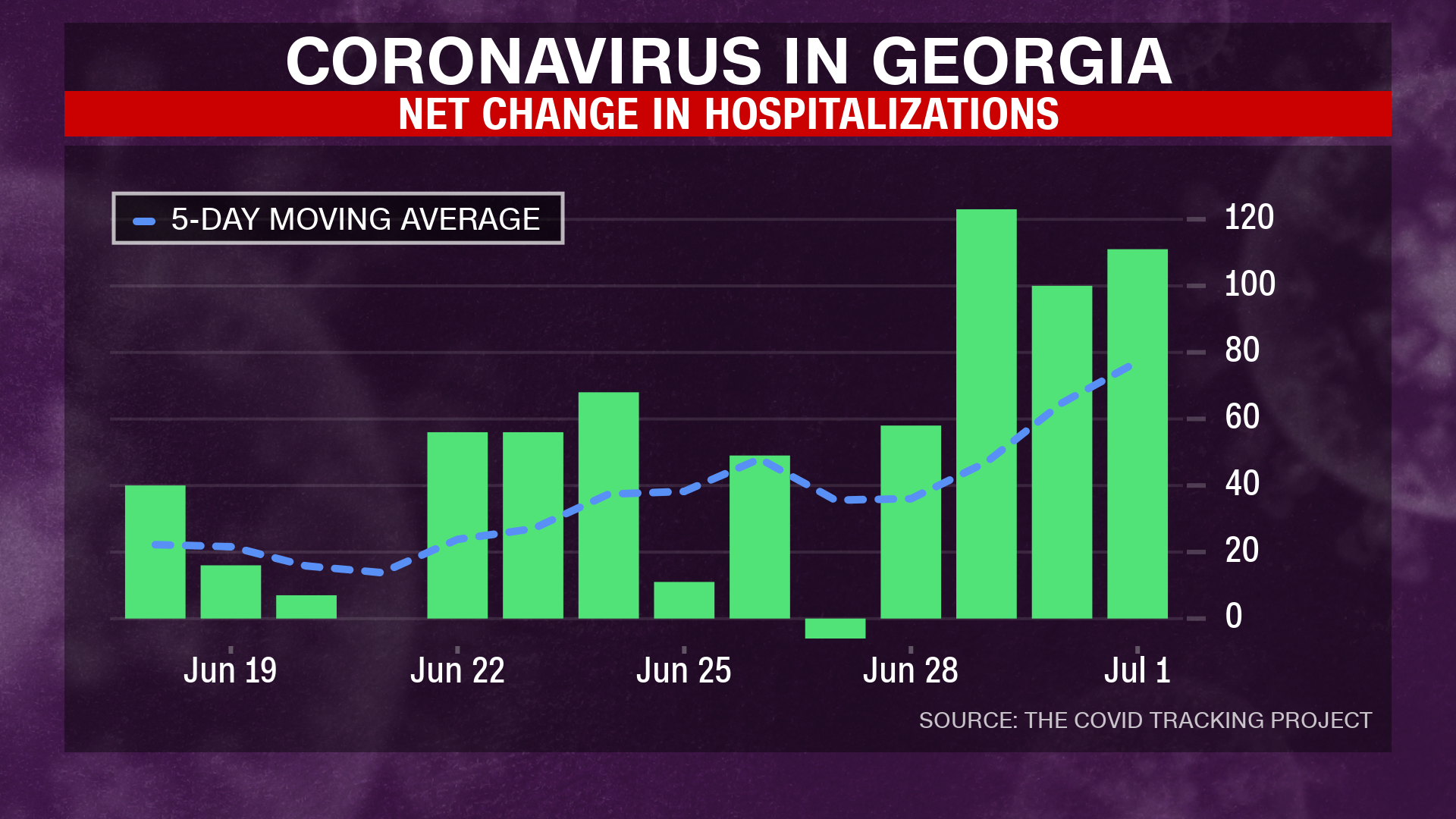 Citing rising cases of coronavirus in Los Angeles county, the University of Southern California will modify its plans for fall undergraduate classes to mostly online courses.

“Public health guidelines continue to change, and Los Angeles County has yet to approve our plans for returning to full campus operations. Los Angeles is experiencing an alarming spike in coronavirus cases, making it clear we need to dramatically reduce our on-campus density and all indoor activities for the fall semester,” according to a statement to students Wednesday.

In June, USC announced it would resume in-person classes in the fall.

“While not what we hoped, we are now recommending all undergraduates take their courses online, and reconsider living on or close to campus this semester. We are continuing with limited in-person, on-campus activity because we believe we can keep students, researchers, staff, and faculty safe with our low-density plan,” said the letter.

Dorms will be limited to one student per room, and the university needs to keep several available for quarantine or surge capacity. Dining halls will adhere to social distance guidelines and offer pre-packaged food and pick-up options.

A Southern California man who tested positive for coronavirus after attending a party expressed his fear and regret a day before he died.

Thomas Macias, 51, went to a barbecue last month near his community in Lake Elsinore, about 70 miles from Los Angeles.

Shortly after the party, he started feeling sick. On June 20, he posted a poignant message on Facebook to warn his loved ones about the risks of the virus, his family said.

"I went out a couple of weeks ago ... because of my stupidity I put my mom and sisters and my family's health in jeopardy," he wrote. "This has been a very painful experience. This is no joke. If you have to go out, wear a mask, and practice social distancing. ... Hopefully with God's help, I'll be able to survive this."

He never made it. He died a day after that post. 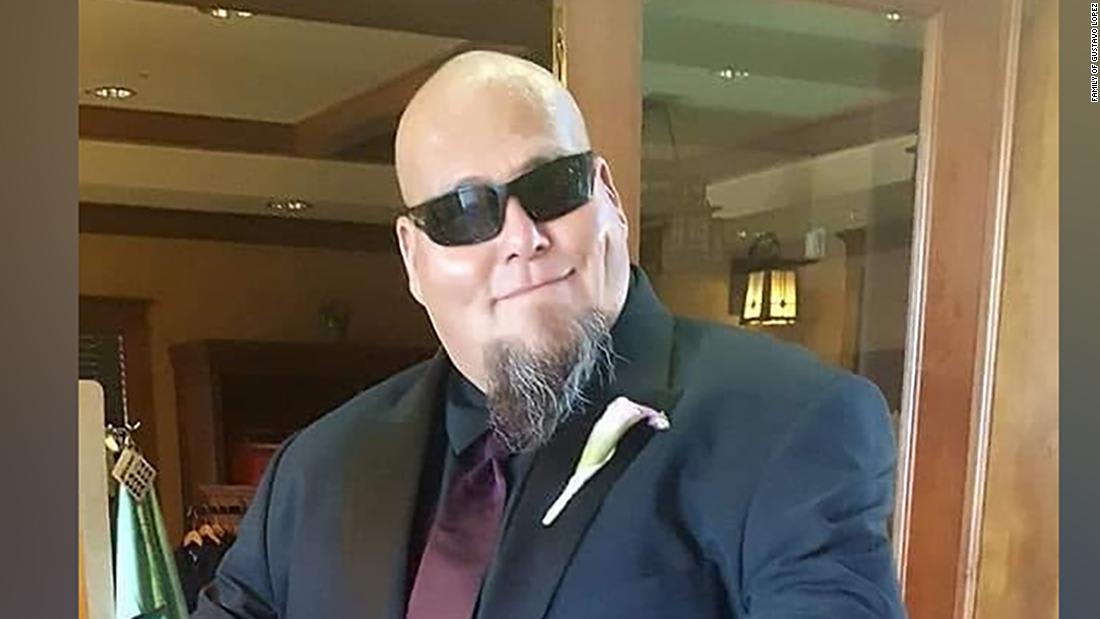 After posting that he regretted attending a party in California, he died of coronavirus the next day