As the holiday weekend quickly approaches, an infectious disease doctor said we could be looking at “the perfect storm” for a spike in new cases.

“It's set up a perfect storm: the combination of travel, the combination of reopening —perhaps in some cases, too early — and the combination of people not necessarily following some of these preventive guidelines,” Dr. Joshua Barocas, an infectious disease physician at Boston Medical Center, said during a Wednesday briefing held by the Infectious Diseases Society of America.

Barocas said after Memorial Day, some places around the country saw a spike in cases.

Dr. Ricardo Franco, assistant professor of medicine at the University of Alabama at Birmingham, said “this surge in our prolonged first wave of infections, it's very difficult to predict what might happen and the Fourth of July weekend could play a big role in this.”

Here are Barocas' recommendations to stay safe this holiday weekend:

Cuomo said the restarting of indoor dining will be postponed "until the facts change" and did not give a specific timeline. His confirmation comes hours after New York City Mayor Bill de Blasio announced that indoor dining would be delayed.

This is only for New York City, which is set to enter phase three next week, Cuomo said. Other New York regions in stage three will be allowed to resume indoor dining.

Cuomo said the move to pause comes as compliance to social distancing and other measures are declining.

"Citizen compliance is slipping. That is a fact," Cuomo said. "I get it. I understand it: Been inside a long time, the weather is warm, I miss my friends."

As cases continue to spike, Miami-Dade County Mayor Carlos Giménez signed an amendment on Tuesday requiring hotels, motels and commercial lodging to restrict pool access and alcohol sales for the Fourth of July weekend, according to a news release from the county.

Here are some of the guidelines:

“Recent spikes in Covid-19 cases throughout Miami-Dade County require that we take these measures to tamp the curve,” Giménez said. “While we want everyone to enjoy the Fourth of July Weekend, we must safeguard our community’s public health. There is no more patriotic an act than protecting the lives of everyone in our County.”

New York Gov. Andrew Cuomo said 11 people died in the state from coronavirus on Tuesday. He said that number of deaths is "just about as low as it's ever been" since the pandemic started.

Overall, Cuomo said the state is doing "great" in terms of the key numbers officials are tracking. However, he said, "I feel that there are storm clouds on the horizon" regarding the numbers surging in other parts of the country.

Cuomo noted that the state did about 56,000 tests yesterday, and the positive rate was 1.1%, which is "also good news," he said.

New York Gov. Andrew Cuomo slammed President Trump has been "denying the scientific facts" throughout the coronavirus pandemic and demanded the President "admit the threat of the virus."

In a scornful message to President Trump, Cuomo said the first thing Trump must do is "actually tell the truth."

"Admit you were wrong," Cuomo demanded. "It's not an admission: Everybody knows you were wrong. It doesn't cost you anything. At least have the courage to admit what everybody else already knows. You were wrong."

Cuomo also called on the President to wear a mask, saying "You want to take one easy step that will send a powerful message, put a mask on it."

Cuomo criticized Trump's lack of leadership during the pandemic, saying the President ignored the severity of the virus.

"You know what Mr. President? Reality wins. Every time. You don't defeat reality," Cuomo said, adding the Trump has "he has lived in denial"

"He has been denying the scientific facts from day one," Cuomo said.

One the epicenter of the coronavirus pandemic in the US, New York is now reporting stable numbers in new coronavirus cases while many other US states are seeing significant increases in cases.

Ahead of Vice President Mike Pence's trip to Arizona today, the state is reporting 4,878 new cases of Covid-19 as well as 88 deaths from the disease over the last 24 hours, state data shows.

Today’s numbers are a new record high for both new daily cases and deaths since the state started posting data publicly in mid-March.

The state’s Department of Health acknowledged the record highs today in a tweet.

“The virus is widespread in Arizona,” it added.

The state is also reporting a record high 89% of ICU beds being used by those with the disease.

Pence is traveling to Phoenix today to meet with Gov. Doug Ducey about his state’s recent rise in coronavirus cases. He is expected to speak to the press at 3:35 p.m. ET.

Here is a look at the progression of new Covid-19 cases in the state, according to John Hopkins University data: 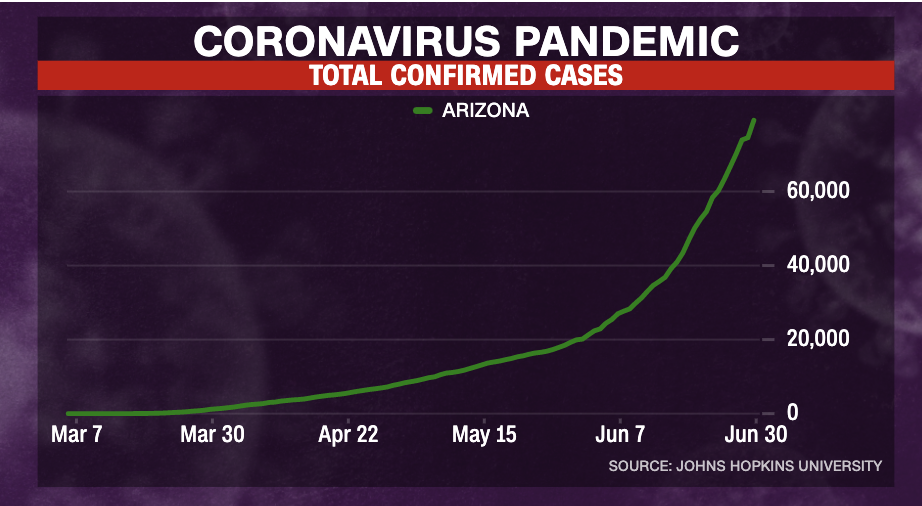 I’m not sure what more we can do, short of a total shutdown,” Giles said to CNN’s Kate Bolduan, adding that he expects numbers to climb.

ICU beds in the state’s largest hospital are at about 90% capacity, he said. A quarter of hospitalizations are people 22 to 42 years old.

The Republican mayor said it “would be a very positive step” if President Trump started wearing a mask in public.

“Modeling good behavior, I think, would help us and help people get over this perception that there's some sort of a political statement attached to wearing a mask,” he said.

Vice President Mike Pence is traveling to the state today and will be meeting with Arizona Gov. Doug Ducey.

The city has a mask mandate in place and is following CDC recommendations, Giles said. Residents are mostly following guidelines, but he added that there were some “growing pains.”

“We had some pushback, and some of it was the unfortunate political pushback that you've seen in other areas of the country as well,” he said.

The Florida Department of Health is reporting 6,563 additional coronavirus cases, bringing the state total to at least 158,997, according to data released by the state on Wednesday.

Today's new daily total is up slight from yesterday's — a little more than 6,000 new cases. The state reported its highest ever daily case count on Saturday, with more than 9,500 new cases.

Here's is the breakdown of coronavirus cases in the state of Florida since Friday:

Official Covid-19 death counts in the United States may underestimate the full rise in fatalities linked with the pandemic, according to a new study.

The new study, published in the journal JAMA Internal Medicine today, found that the number of excess deaths that have occurred so far during the pandemic, between March and May, is actually 28% higher than the nation’s official number of deaths attributed to Covid-19.

"The gap between reported Covid-19 deaths and excess deaths can be influenced by several factors, including the intensity of testing; guidelines on the recording of deaths that are suspected to be related to Covid-19 but do not have a laboratory confirmation; and the location of death," the researchers wrote in the study.

The researchers added that, "As the pandemic has progressed, official statistics have become better aligned with excess mortality estimates, perhaps due to enhanced testing and increased recognition of the clinical features of Covid-19."

What researches studied: The new study included data from the National Center for Health Statistics on deaths due to pneumonia, influenza and Covid-19, as well as deaths from any cause.

The researchers — from Yale University, National Institutes of Health, Aledade Inc., University of Massachusetts Amherst and Roskilde University in Denmark — used that data to examine how many deaths were due to any cause each week between March and May this year compared with in previous years.

They also examined how many deaths were due to Covid-19 during that same time period.

What the data showed: The researchers found that there were about 781,00 total deaths in the United States from March 1 to May 30, representing 122,300 more deaths than would be typically expected at that time of year compared with previous years.

Meanwhile, there were 95,235 reported deaths attributed to Covid-19 between March and May — a tally less than the total number of excess deaths, the researchers found. The data also showed that the deaths and completeness of death counts vary “markedly” between states.

Limitations of the study: Analyses were based on provisional data, and are subject to being incomplete due to delays in reporting deaths that have occurred.

Also, "the number of excess deaths reported herein could reflect increases in rates of death directly caused by the virus, increases indirectly related to the pandemic response (eg, due to avoidance of health care), as well as declines in certain causes (eg, deaths due to motor vehicle collisions or triggered by air pollution)," the researchers wrote in the study.

"Further work is needed to determine the relative importance of these different forces on the overall estimates of excess deaths," they said.

Some context: Certain US officials have raised concerns that deaths not caused by coronavirus have been improperly attributed to Covid-19, while others have been worried that the nation’s Covid-19 death toll has been undercounted.

Health experts have long warned that the national count of Covid-19 deaths in the US could be underestimated.

When it comes to an accurate count of Covid-19 deaths in the US, "we really are just seeing the tip of the iceberg and a lot of it has to do with the tests we have available," Dr. Panagis Galiatsatos, a pulmonary and critical care physician on the front lines at Johns Hopkins Medicine in Baltimore, told CNN in April.