At least 16 states have halted their reopening plans in response to a surge in new infections, but some health officials say the spread of coronavirus will be difficult to control.

The virus has been especially rampant in Arizona, and the state is closing bars, gyms and other businesses for another 30 days as a precaution. In Florida, some jurisdictions are requiring the use of face masks, including in Jacksonville, where President Trump is expected to accept the Republican presidential nomination in less than two months.

The US has reported more than 2.5 million cases of the virus and at least 126,140 deaths, according to Johns Hopkins University. State and local leaders have said the rise in cases are in part driven by gatherings, both in homes and in places like bars — which some experts called the perfect breeding ground for the virus.

Here's where cases are increasing across the US: 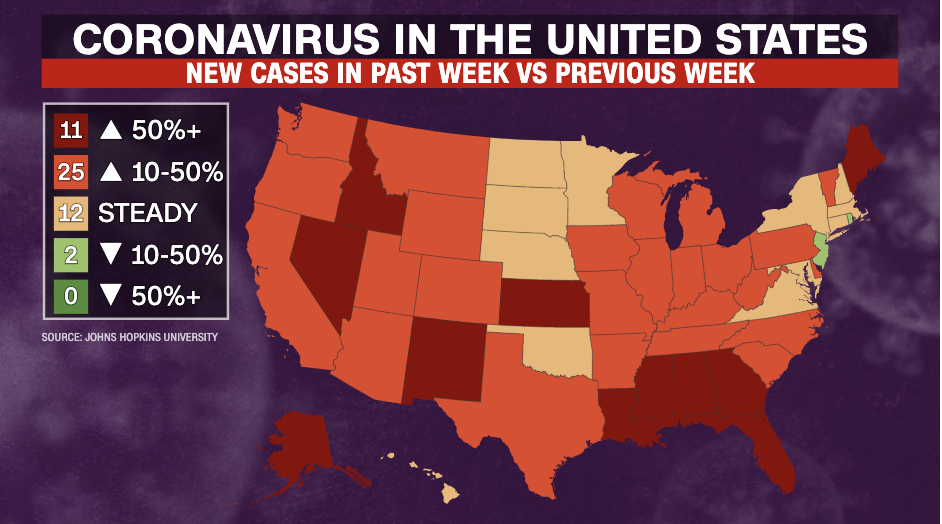 Miami Beach, Florida, Mayor Dan Gelber said the city is implementing a face mask mandate today, in part because there “hasn't been a unity of purpose in the community.”

The city still gets hundreds of thousands of visitors almost every day, Gelber said, and there will be civil penalties those those who don’t comply.

“We don't have a lot of tools left in the kit right now, so we're trying everything we can to stop this spread and reverse what is a very enormous spike in our community and in our state. And, you know, we don't want to go back to sheltering in place because of the impact that has,” Gelber said.

The mayor said Florida Gov. Ron DeSantis should make mask-wearing mandatory, and it’s been a “problem” to get people to wear them.

“There are people who think it's a political statement to wear a mask, and it's like an insult to the family and they're fighting us about it, and I can't imagine why that has become something right now, other than that, you know, the President has made it something,” Gelber said.

CNN's David McKenzie reports from a recreational center in South Africa converted into a field hospital as the country grapples with the worst coronavirus outbreak in Africa.

According to figures from Johns Hopkins University, South Africa has reported more than 144,000 cases of coronavirus and more than 2,500 deaths.

More than 10.3 million coronavirus cases have been reported worldwide, including at least 505,000 deaths, according to Johns Hopkins University (JHU).

But the pandemic is far from coming to an end any time soon, WHO Director-General Tedros Adhanom Ghebreyesus warned Monday.

"This is not even close to being over," Tedros said at a media briefing in Geneva on Monday.

Fauci to testify: Today, coronavirus task force member Dr. Anthony Fauci, Centers for Disease Control and Prevention Director Robert Redfield and other top government health officials will testify before a Senate Committee on the latest efforts by the US government to contain the pandemic.

There have been almost 2.6 million cases of coronavirus in the US and at least 126,000 people have died, according to JHU.

"High incidence" of cases among children in new UK hotspot: UK Health Secretary Matt Hancock said Tuesday that there is an unusually “high incidence” of coronavirus cases among children in Leicester, a city in England's East Midlands region and the first in the UK to be put under a localized lockdown. One in 10 of all of positive cases across the whole country in the last week have happened in Leicester, Hancock said, but local officials have warned that enforcing the lockdown will be challenging given a lack of resources.

The Australian state of Victoria announced a partial lockdown after seeing a double-digit rise in the newly confirmed cases for over two weeks.

On Wednesday 11:50 pm local time, 10 postcode areas in Victoria will return to stage 3 “Stay at Home” until July 29, Premier Daniel Andrews announced in a daily press briefing on Tuesday.

What does this mean? People who live in one of the so-called "hot zones" can only go out for food and supplies, care and caregiving, exercise, and study or work -- if they can’t do it from home, and the Victorian police will be “actively enforcing these suburban lockdowns.”

Andrews was told in a briefing that “at least a significant number and potentially more” of the outbreaks in the north of the city are attributable to “staff members in hotel quarantine breaching well-known, well-understood infection control protocol,” he said.

He would not elaborate further on the details of those breaches, but said he will have a former judge conduct an inquiry into those infection control protocol breaches.

Andrews said when there’s a spike in cases, they “literally leave no stone unturned to try and answer the riddle,” using genomic sequencing as an important tool to provide answers on the linkages between cases that are not always apparent through contact tracing.

Last Friday, Victoria announced that it would launch a targeted blitz for testing, allowing residents in 10 suburbs to receive free testing for the next 10 days.

So far 93,000 tests have been conducted in total, the biggest testing effort in Australia.

Spain's economy contracted 5.2% in the first quarter of 2020 due to the impact of Covid-19, the Spanish National Statistics Institute (INE) said in a report Tuesday.

The Spanish economy was growing in 2019 at rates of 0.6% in the first quarter and 0.4% in the second, third and fourth quarters.

Coronavirus task force member Dr. Anthony Fauci, Centers for Disease Control and Prevention Director Robert Redfield and other top government health officials will testify before a Senate Committee on Tuesday on the latest efforts by the US government to contain the pandemic.

More than half of all states are seeing a rise in cases, and Florida, Texas and Arizona are getting hit particularly hard. Texas has begun scaling back its reopening, and beaches in Florida have closed for the upcoming holiday weekend.

Fauci and Redfield testified before lawmakers last week, when Fauci said "we're going to be doing more testing, not less," in response to President Donald Trump's recent claim that he asked his administration to slow down testing during the pandemic.

Senators have been weighing another stimulus package in recent weeks as unemployment numbers remain worrisome and economic hardship stemming from the pandemic persists. Republicans remains divided on the size and scale of the next stimulus bill and while it has been discussed for months, the next phase of economic relief is still weeks away. But there is now broad agreement something has to be done -- something that wasn't always the case.

Royal Dutch Shell is writing down the value of its assets by as much as $22 billion as lower oil prices push the Anglo-Dutch company to accelerate a shift away from fossil fuels.

The company said the changes to its price forecast reflect the economic trauma caused by the coronavirus pandemic, which has plunged countries around the world into recession and sharply reduced demand for energy.

Brent crude futures hit their lowest level in decades in April, falling below $20 per barrel. They've staged a comeback to trade above $41 per barrel, but that's still well below where prices started the year.

Shell said Tuesday that it expects to take a charge of between $15 billion and $22 billion in the second quarter as a result of the shifting market conditions. It's scheduled to report its financial results for the quarter on July 30.

Inside America's jails and prisons there's a delicate balance at play, weighing the usual demands of a typically crowded inmate population against the potent reality of an ongoing coronavirus pandemic.

These precautions have mostly come in the form of single celling detainees, quarantining individuals who are either sick or symptomatic, reducing the overall population by releasing nonviolent low-level offenders and more.

In places like Chicago's Cook County Jail, summertime spikes in detainees are typical, usually coinciding with violence in the warmer months, meaning that the "delicate balance" they've put in place to protect against coronavirus quickly gets thrown off.

On a month-to-month basis, the jail is already beginning to see an uptick in the average number of detainees they're getting, according to data provided by the jail.

It means the jail may have to lose one of their main precautions of single celling and go back to putting two in a cell, following general Centers for Disease Control and Prevention guidance that those who have recovered from coronavirus are not as likely to be infectious.

That would mean pulling from a pool of detainees siloed in the jail's quarantine bootcamp, created specifically for the pandemic to separate out those who are sick.