UK Health Secretary Matt Hancock said Tuesday that there is an unusually “high incidence” of coronavirus cases among children in Leicester, a city in England's East Midlands region which will be the first in the UK to be put under a localized lockdown.

Hancock said that this does not mean children are necessarily presenting symptoms or are unwell.

“We sent in a lot of extra testing into Leicester over the last 10 days or so and one of the things we've found is that there are under-18s who have tested positive and therefore, because children can transmit the disease even though they are highly unlikely to get ill from the disease, we think that the safest thing to do is to close the schools,” Hancock said on BBC Radio 4.

Local lockdown: As part of a localized lockdown on the city, non-essential shops will close from Tuesday in Leicester, and schools will close on Thursday. Vulnerable pupils and children of key workers will continue attending class.

Some 3,216 Covid-19 cases have been confirmed in Leicester since the start of the pandemic, the latest figures obtained by the city council show. Of these, 944 cases were reported in the last two weeks until June 23, according to a council statement.

The government’s lockdown decision is “to protect against the transmission in Leicester” where, according to Hancock, “the number of cases is three times higher per head of population than in the rest of the next closest city.”

One in 10 of all of positive cases across the whole country in the last week have happened in Leicester, so we really have a specific outbreak and that's why I've taken the action that I have,” Hancock added.

Challenges ahead: Asked how the lockdown will be enforced, Hancock told Sky News that the government will bring forward "a legal change very shortly in the next couple of days."

The Mayor of Leicester Peter Soulsby told Sky News Tuesday that "it's going to be quite a challenge” to enforce the lockdown on the city.

Asked if there will be roadblocks by the police, Soulsby said that “that is wholly impracticable” and that the council “doesn't have the resources” to enforce the lockdown.

Tuesday marks six months since the World Health Organization first received reports of cases of pneumonia in China from an unknown cause, which would later be identified as a novel coronavirus infection, WHO Director-General Tedros Adhanom Ghebreyesus said Monday.

More than 10.3 million coronavirus cases have been reported worldwide, including at least 505,000 deaths, according to Johns Hopkins University.

But the pandemic is far from coming to an end any time soon, Tedros warned.

Australian state reimposes lockdown on 10 suburbs: Victoria state has reintroduced lockdown measures on 10 suburbs around Melbourne following a recent spike in coronavirus cases. A stay-at-home order will come into effect at 11:59 p.m. local time on July 1 and last until July 29.

Beauty parlors, gyms, libraries and swimming polls in these 10 postcodes -- which have only recently reopened -- will once again be restricted, while cafes and restaurants will revert to takeout and delivery only.

A new swine flu with "pandemic potential" has been discovered: Chinese researchers have discovered a new type of swine flu that can infect humans and has the potential to cause a future pandemic, according to a study released Monday. Researchers say the disease, called the G4 virus, now shows "all the essential hallmarks of a candidate pandemic virus," and is genetically descended from the H1N1 swine flu that caused a global pandemic in 2009.

The rest of this year's World Rugby Sevens Series has been canceled due to the coronavirus pandemic, the sport's governing body said Tuesday.

“HSBC World Rugby Sevens Series 2020 in Langford, London, Paris, Singapore, and Hong Kong have been canceled due to the ongoing and dynamic global nature of the COVID-19 pandemic,” World Rugby said in a statement.
"The decision follows detailed and constructive dialogue with the host and participating unions, and has been taken with the health and wellbeing of the rugby community and the wider public as a top priority.”

The early conclusion of the tournament means that New Zealand will be awarded both the women’s and men’s titles after being top of the standings before the pandemic initially suspended the series.

At least 16 US states have halted their reopening plans in response to a surge in new infections, but some health officials say the spread of coronavirus will be difficult to control.

The US has reported more than 2.5 million cases of the virus and at least 126,000 deaths, according to Johns Hopkins University. State and local leaders have said the rise in cases are in part driven by gatherings, both in homes and in places like bars -- which some experts called the perfect breeding ground for the virus.

But experts have for long warned that some states also reopened far too soon and too quickly, cautioning the move could lead to more spikes in cases.

States across the US have hit pause on reopening:

Chinese researchers have discovered a new type of swine flu that can infect humans and has the potential to cause a future pandemic, according to a study released on Monday.

The disease, which researchers called the G4 virus, is genetically descended from the H1N1 swine flu that caused a global pandemic in 2009.

G4 now shows "all the essential hallmarks of a candidate pandemic virus," said the study, published in the scientific journal Proceedings of the National Academy of Sciences.

The new study comes as the world grapples with the Covid-19 pandemic, which has now infected more than 10.3 million people globally and caused more than 505,000 deaths, according to data from Johns Hopkins University.

How was it discovered? Researchers detected G4 during a pig surveillance program that ran from 2011 to 2018, in which they collected more than 30,000 nasal swab samples from pigs in slaughterhouses and veterinary teaching hospitals across 10 Chinese provinces.

From these samples, researchers identified 179 swine influenza viruses -- but not all of them posed a concern. Some only showed up one year out of the program's seven, or eventually declined to nonthreatening levels.

But the G4 virus kept showing up in pigs, year after year -- and even showed sharp increases in the swine population after 2016.

Can it infect people? Further tests showed that G4 can infect humans by binding to our cells and receptors, and it can replicate quickly inside our airway cells. And though G4 holds H1N1 genes, people who have received seasonal flu vaccines won't have any immunity.

G4 already appears to have infected people in China. In Hebei and Shandong provinces, both places with high pig numbers, more than 10% of swine workers on pig farms and 4.4% of the general population tested positive in a survey from 2016 to 2018. 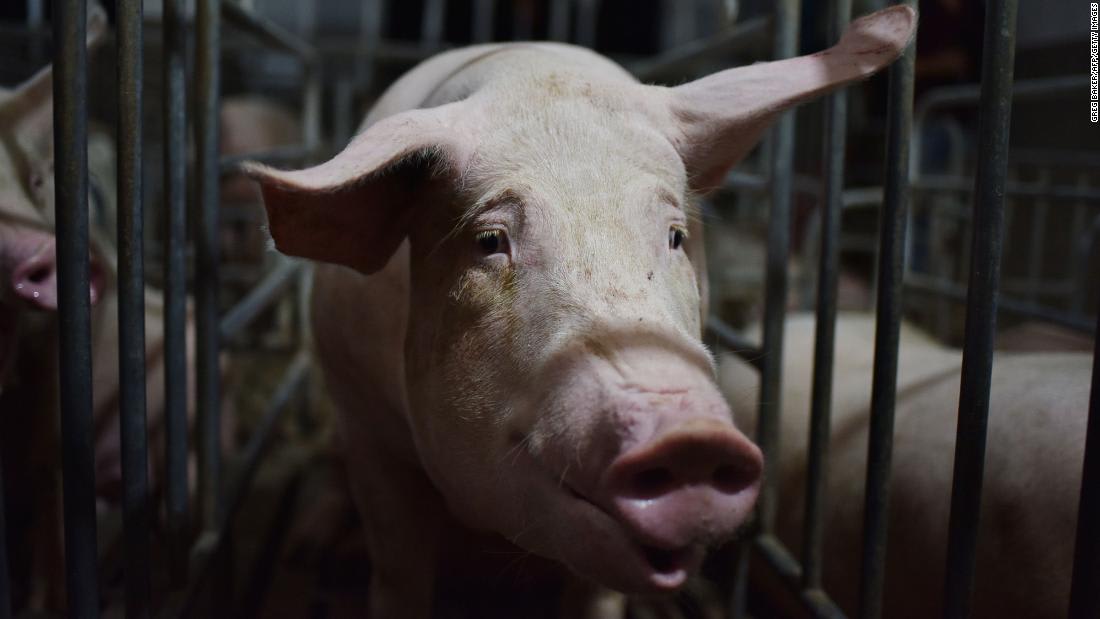 At first, the attacks directed at Hugo's Tacos were mainly childish comments made by people who appeared frustrated that they were asked to wear a mask while at the restaurant.

But about a month ago, the comments escalated into screams.

Customers at the popular Los Angeles spot threw drinks and other objects at cashiers, Hugo's Tacos' CEO told CNN. They called Hugo's Taco Stand's mask rule "stupid" and yelled at the primarily Latino staff to "Go back to where you came from."

One of the owners tracked the number of attacks last Thursday, and realized it was an hourly onslaught. On Sunday, following this realization, Hugo's Tacos announced it is temporarily closing down its two locations in Los Angeles.

"Our taco stands are exhausted by the constant conflicts over guests refusing to wear masks," Hugo's Tacos wrote in an Instagram post. "A mask isn't symbolic of anything other than our desire to keep our staff healthy. Both of our locations are going to take a break and recharge."

The move was unprecedented for the institution, which has operated for 15 years.

The United States reported at least 41,586 new coronavirus cases and 338 deaths on Monday, according to Johns Hopkins University.

The Australian state of Victoria has reintroduced lockdown measures on 10 suburbs around Melbourne following a recent spike in coronavirus cases.

A stay-at-home order will come into effect at 11:59 p.m. local time on July 1 and last until July 29 in 10 affected postcodes, according to a statement from Victorian Premier Daniel Andrews.

"If you live in these locations, there will again only be four reasons to be out:
"Shopping for food and supplies, care and caregiving, exercise, and study or work – if you can’t do it from home," the statement said.

Beauty parlors, gyms, libraries and swimming polls in these areas -- which have only recently reopened -- will once again be restricted, while cafes and restaurants will revert to takeout and delivery only, according to the statement.

To date, Japan has reported a total of 19,305 cases, including 712 infections linked to the Diamond Princess cruise ship. The death toll in the country stands at 985, with 13 fatalities associated with the ship.