During the first White House coronavirus task force briefing in two months, Vice President Mike Pence described an alternate reality to what is really happening in American cities across the country with respect to the coronavirus pandemic, according to a couple of health experts.

“We’re seeing a massive resurgence in our metropolitan areas across the southwestern part of the United States — here in Houston, Dallas, Phoenix and in Los Angeles,” Dr. Peter Hotez, dean of the National School of Tropical Medicine at the Baylor College of Medicine, told CNN's Brianna Keilar shortly after the briefing wrapped up.

“This is a tragedy, and what's more, it's not presented as a tragedy — it's presented as, ‘We're doing a pretty good job and now there are a couple of hotspots.’ These are not ‘hotspots’ — these are the largest metropolitan areas in the United States,” he said.

More on this: This first briefing since the end of April comes as cases are going up in more than half the states, with infections in some large states close to being out of control and filling hospital intensive care units.

CNN chief medical correspondent Dr. Sanjay Gupta also said the vice president presented a picture that does not at all match the facts of what is happening with coronavirus infections in the country.

“One of the first things that was said is all 50 states are opening safely and responsibly. That's simply not true. I don't think there's a single state that actually followed the opening criteria that the task force themselves actually laid out,” said Gupta. “They say that we have greatly expanded testing. We're still probably at a 10% of the testing that we should be doing at this point in this pandemic. They say we've had 45 days to stop the spread. Well, Brianna as you just mentioned, we haven't stopped the spread.”

Gupta said that the country had the highest number of daily infections since this pandemic began in the last 24 hours. “This is a problem. We can spin it in all sorts of different ways. But the reality is that not only are things bad, they’re as bad as they've been right now with regard to daily new infections.”

Hotez said the briefing missed the opportunity to present some solutions. “The terrible part for me was there were no ideas presented. They have no idea what to do,” he said. “There is no concrete federal plan for helping the metro areas; there was not a single suggestion made,” he added.

Gov. Gavin Newsom has advised Imperial County’s health officials to reinstate its stay-at-home order, he announced in a news conference.

Imperial County has a coronavirus positivity rate of 23%, with a case rate of 680 in the past week. The population of Imperial County is approximately 181,000.

These rates are well above state thresholds, said Sonia Angell, the state's health director. The state guidelines are a case rate of 100 and a positivity rate of 10%.

More than 500 patients have been transferred out of Imperial County in the past five weeks, the governor said, and reinforcements from the state, including 44 National Guard members, have been sent in to assist.

Some drivers of the uptick include US citizens returning to the states to seek health care, the California Department of Public Health said earlier this week.

The governor said “it’s too early to tell” if the high number of cases in Arizona are a contributing factor to increases in Imperial County, but a "deep dive" study by the Centers for Disease Control and Prevention is underway to look at that data.

Imperial is one of 15 counties under what Newsom calls a "watch list" as concerns mount in the state.

Florida Gov. Ron DeSantis said he isn't mandating masks statewide but will continue to provide guidance that people should social distance and use masks when that's not possible.

The governor said to make masks a mandate punishable by law could backfire.

DeSantis said that if local governments want to create an ordinance, it's up to them. Businesses also have the right to ask customers to wear masks

The governor said that some local sheriffs have said they won't enforce it and there are parts of the state where a mandate wouldn't make sense.

Florida Gov. Ron DeSantis said an increased positivity rate and expanded testing is creating the large new case counts that have been announced this week.

He attributed the high case count of nearly 9,000 reported Friday to a "test dump."

"Really nothing has changed in the last week," the governor said.

The majority of new cases are now people who are younger, with the median age ranging from 33 to 35 years old, DeSantis said.

He said the new cases are typically asymptomatic and primarily due to community transmission.

DeSantis told vulnerable populations to be vigilant and continue to avoid large crowds and other situations where transmission could be possible.

New York City has 17,753 confirmed coronavirus fatalities and 4,668 probable coronavirus deaths as of June 26, according to the most recent data on the city website.

The New York City Health Department defines probable deaths as people who did not have a positive Covid-19 laboratory test, but their death certificate lists as the cause of death “Covid-19” or an equivalent.

There have been 210,908 coronavirus cases in the city and 54,578 people have been hospitalized, according to the city.

The data is from the New York City Health Department and was updated on June 26 at 1 p.m., according to the website.

The numbers may not line up exactly in real time with CNN’s database drawn from Johns Hopkins University and the Covid Tracking Project.

According to a statement, the federal government will maintain the program's support while surging resources to Dallas and Houston.

"These federally-supported testing sites are a vital component of this commitment," Abbott said in the statement. "I thank our federal partners for extending these operations in Texas, and for their flexibility in allocating their resources to the communities of Dallas and Houston that are experiencing a high number of COVID-19 cases right now."

The state reported a record of almost 6,000 new cases on Thursday.

The US needs to start considering "flooding the system with testing" in light of new data from the Centers for Disease Control and Prevention suggesting that for every person infected with Covid-19, 10 more people in the country go undiagnosed, Dr. Anthony Fauci, the director of the National Institute of Allergy and Infectious Diseases, said Friday.

"No way is it good news when you think there are 10 times more people infected than you thought there were," Fauci said. "So I think that's something that we need to address … to consider start literally flooding the system with testing, to really get a good handle about what is going on in the community."

Fauci said contact tracing was not going well ⁠— with some exceptions ⁠— and argued for pool testing over individual identification, particularly in areas where people don't want to cooperate with contact tracing efforts.

"Instead of I test me, and I test you... you could take 20, 30, 40 pool them, do one test. If they're all negative, then you know that that's negative. You now have 40 people who are negative. If you get a positive, then you backtrack and try and figure out who that positive is," Fauci said.

The governors of Florida and Texas pulled back some of the measures put in place to reopen those states as coronavirus infections rise.

Additionally, governors of Arizona, Arkansas, Delaware, Idaho, Louisiana, Maine, Nevada, New Mexico, and North Carolina have announced they will not move ahead to the next phase of reopening.

Florida has erupted as a hotspot in the US's coronavirus pandemic.

Here's a look at the rise of coronavirus cases in Florida: 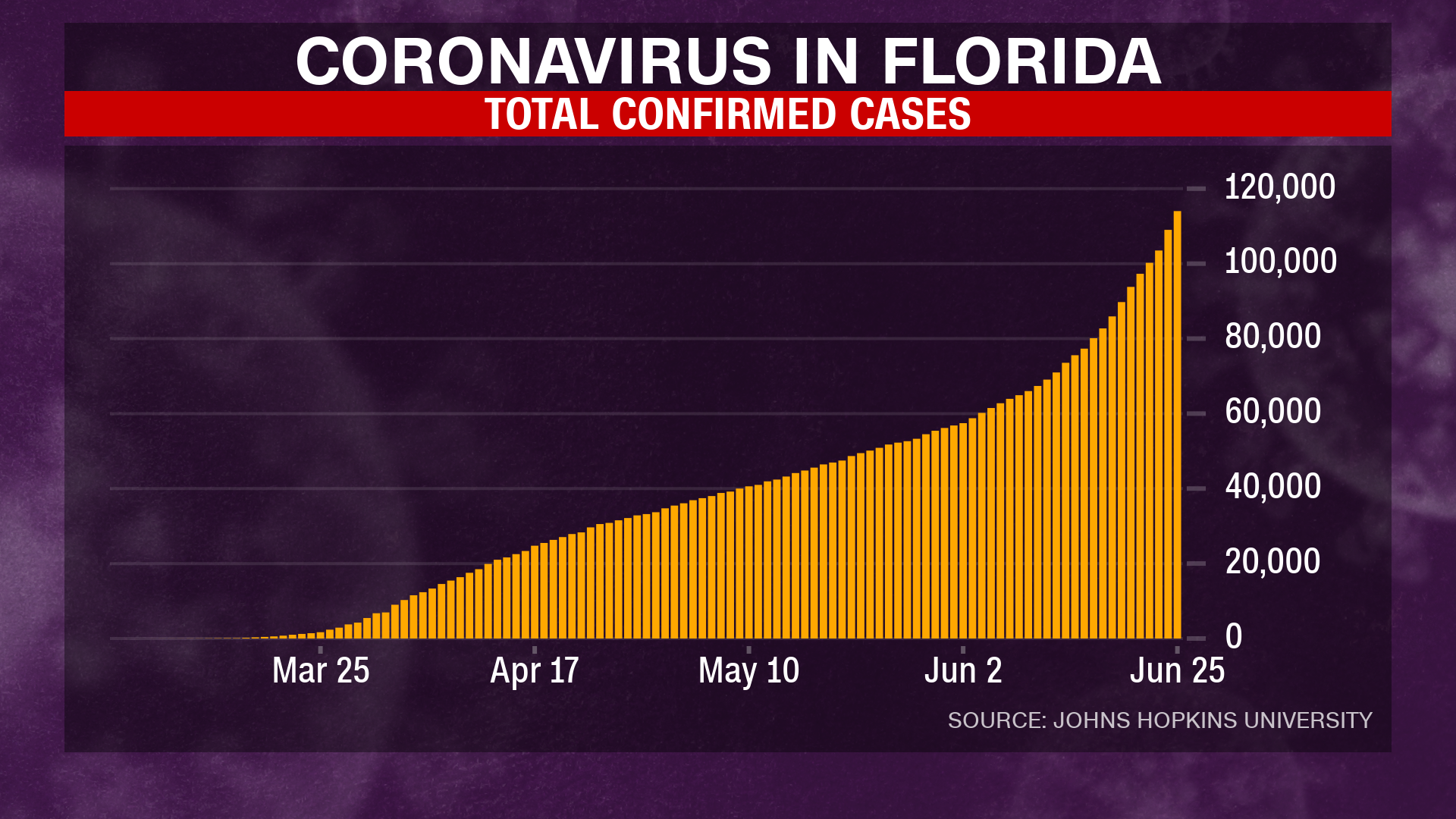