India reported 13,586 coronavirus cases in the past 24 hours, the biggest single-day jump in infections to date.

There were 336 deaths reported in the past 24 hours, according to the Ministry of Health and Family Welfare.

The total confirmed cases in the country now stands at 380,532, and 12,573 people have died, ministry figures show.

Until last week, Beijing seemed to have all but moved on from the coronavirus pandemic.

For 55 days, the Chinese capital had not reported any locally transmitted infections and life had been returning to normal.

But that facade of normality was shattered when a fresh cluster of coronavirus cases emerged from a sprawling wholesale food market in the city, infecting more than 180 people as of Friday.

Within a matter of days, the metropolis of more than 20 million people was placed under a partial lockdown. Authorities reintroduced restrictive measures used earlier to fight the initial wave of infections, sealing off residential neighborhoods, closing schools and barring hundreds of thousands of people deemed at risk of contracting the virus from leaving the city.

The flare-up of infections in Beijing, the seat of Communist Party power and previously considered among the country's safest cities, is a stark reminder of how easily the virus can come back to haunt places where it was thought to have been tamed.

The current outbreak in Beijing is the worst resurgence of the coronavirus yet, and authorities are still trying to track down its source.

Previously, reports had linked the outbreak to seafood or meat, after traces of the virus were reportedly detected on a chopping board used by a seller of imported salmon at the market. However, there are now concerns that the virus had been quietly spreading for weeks before it was first detected.

Read more about the new outbreak and Beijing's race to contain it: 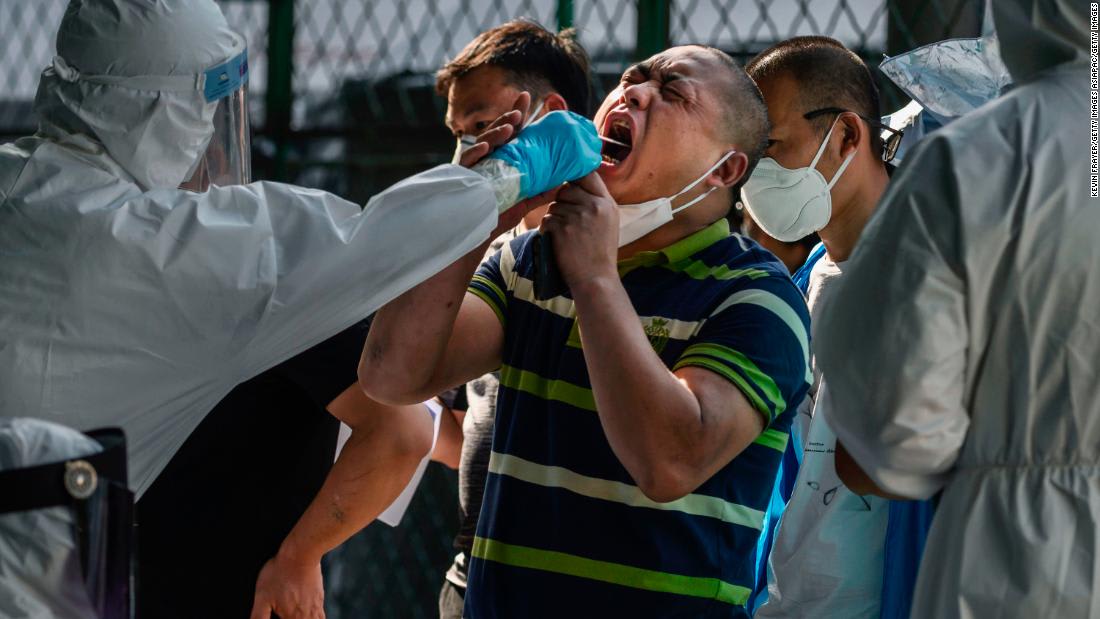 Twenty-five of the new cases are in Beijing, two in Hebei and one in Liaoning.

Beijing has reported 183 new cases in the last eight days since the Xinfadi market outbreak.

Around 356,000 people linked to the market have been tested as of Wednesday, according to Beijing health officials. The city's testing capacity stands at around 400,000 tests a day but will continue to increase, the official said.

On Thursday, China’s chief epidemiologist, Wu Zunyou, said the patients in most of the new cases were people who worked at seafood and meat stands in the market.

“Patients from the seafood market showed symptoms earlier than others. Preliminary assessment showed that low temperatures and high humidity may be favorable to the survival of the coronavirus,” Wu said.

The Indian capital New Delhi has reported 49,979 cases of coronavirus, making it the second Indian city after Mumbai due to hit the 50,000 mark.

"We may need more ICUs in the coming days," Kejriwal tweeted on Wednesday, adding that he is in discussion with doctors at government hospitals on how best to increase the number of ICUs.

Following a meeting with the union home minister on Thursday, the New Delhi government reduced the cost of testing for coronavirus and adopted a new "Rapid Antigen" methodology that has been approved by the Indian Council of Medical Research.

The method provides results in 15 minutes.

The outbreak in Beijing, which has infected more than 100 people, will be the latest test of China's coronavirus containment strategy.

On Thursday, Wu Zunyou, chief epidemiologist at China's Center for Disease Control, struck a victorious tone, declaring that the outbreak in Beijing is already "under control."

Wu said that it is still likely that there will be newly confirmed cases linked to the market emerging in the coming days -- but it is not likely due to fresh transmission.

The chief epidemiologist said that it was not unexpected to see a new outbreak in Beijing, given the large number of new global cases.

Dr. Ashish Jha, director of the Harvard Global Health Institute, says he is worried that, unless there are policy changes, the growing numbers of new Covid-19 cases in the United States could get much bigger.

“I am worried that these are going to get worse and we may see more states joining that list,” Jha told CNN’s Don Lemon.

“Look, there are a few things we know that really do work, and I think unfortunately, in many parts of the country we’re not really implementing them, and that worries me.”

Jha said he is also worried for the people who will attend the rally President Donald Trump will hold in Tulsa on Saturday.

Cases in Oklahoma are up 110% from this time last week.

Holding an event indoors, not requiring masks, and having people close together for long periods of time could spread the infection to many.

“This is pretty much the least safe way to get people together and I’m really worried about what’s going to happen with this rally,” Jha said. “There are lots of ways of making it safer it doesn’t sound like the campaign is really going to work on doing that.”

Jha said it is possible that the country could see big spikes in the number of Covid-19 cases out of a rally like this, even if only a few people are infected.

Convalescent plasma -- blood from recovered patients who had Covid-19 -- that has been transfused to hospitalized patients is considered safe, according to a new study.

The study published Thursday in Mayo Clinic Proceedings looked at results from 20,000 patients.

Researchers from the US Food and Drug Administration’s Expanded Access Program for Covid-19 looked at the results from patients who doctors thought might progress to a severe or life-threatening stage of the illness. They were transfused between April 3 and June 11.

Less than 1% of patients experienced serious adverse events. The number of people who died declined to 8.6% at the 7th day of the trial, compared to the 12% who died in a previous part of the safety study of 5,000 patients.

“Our efforts to understand convalescent plasma continue,” said author Dr. Michael Joyner on the Mayo Clinic website. Joyner is a principal investigator at Mayo Clinic. “We’re optimistic, but must remain objective as we assess increasing amounts of data.”

The authors caution that just because the treatment is safe, doesn’t mean that it is effective in treating Covid-19.

The study has limitations and more research will need to be done to determine if this works with this disease. There are several studies underway.

His House Children's Home is a residential program and child placement agency in Miami Gardens.

The facility currently houses 54 children but has the capacity for 232.

Children at the home are tested if they are exposed to a person who has tested positive, if they become symptomatic, or if they are taken to the hospital, according to Veiga.

All of those who have tested positive are asymptomatic and none are hospitalized, His House Children's Home Executive Director Silvia Smith-Torres said in a statement.

Those children are being quarantined in Covid homes on the His House campus, according to Smith-Torres.

Smith-Torres said that the facility is taking precautions including daily temperature checks of the children, and staff before they come into contact with the children. All staff are equipped with PPE and wear full protective gear when they work in homes where children have tested positive, according to Smith-Torres.

Japan reported 68 new coronavirus cases and no new deaths on Thursday, according to the health ministry.

The capital Tokyo saw a rise of new infections with the government announcing 41 new cases.

Nationwide, the number of reported coronavirus cases stands at 18,452, with 712 from the Diamond Princess cruise ship.