Eight US states are currently seeing their highest seven-day averages of new coronavirus cases per day since the coronavirus pandemic began, according to a CNN analysis of data from Johns Hopkins University (JHU).

Below is information about each of those states. This data includes new cases reported by JHU through June 18: 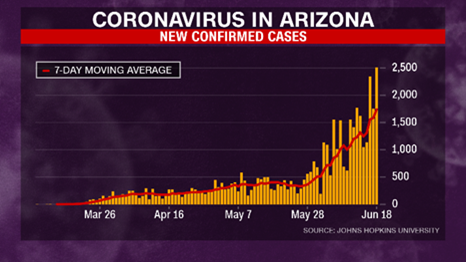 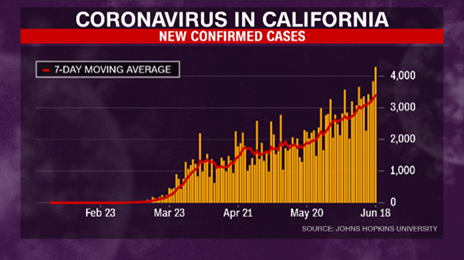 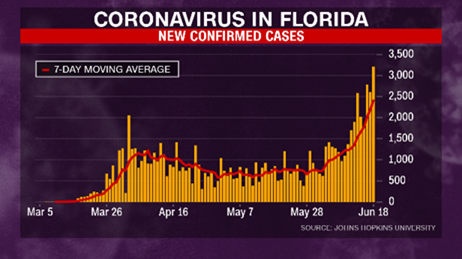 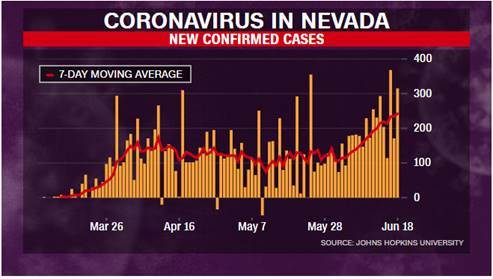 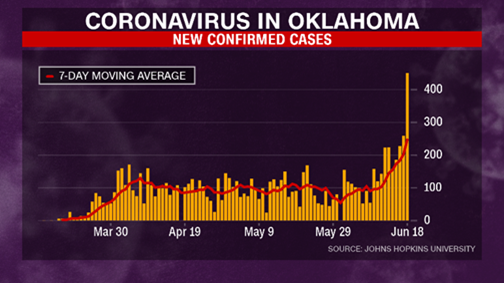 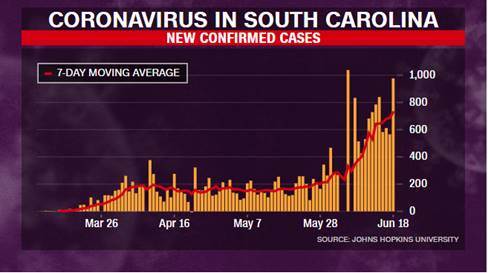 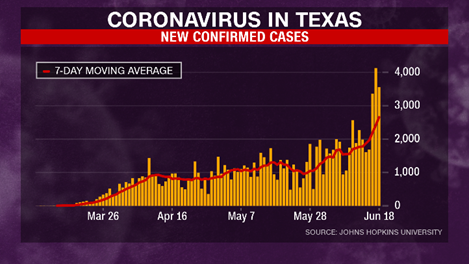 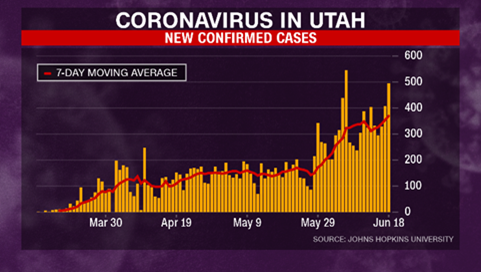 The meeting comes one day before President Trump's first campaign rally since the coronavirus pandemic ground American life to a halt, and as state are seeing spikes in cases.

CNN's Sanjay Gupta has noted that health experts worry the Trump rally in Tulsa, Oklahoma could become a “super-spreader” type of event. Oklahoma is seeing a steady increase in its average of new confirmed cases per day. According to a CNN analysis of Johns Hopkins University data.

Trump said in Wall Street Journal interview that he would not seek to replicate widespread Covid-19 testing if there was a similar reemergence of the virus in the US.

“I personally think testing is overrated,” Trump told the WSJ, adding that more testing in the US let to an increase in confirmed cases that “in many ways, it makes us look bad.” Again, as out health unit has pointed out, it's not the testing that causes the outbreaks.

Palm Beach County Commissioner Melissa McKinlay said Friday she doesn't think her county will shut down ad Covid-19 cases increase in Florida, but hopes they will put more precautions in place as they continue to reopen.

"I don't think we can scale back how we've opened, but we can simply slow down how we move forward and put these precautions in place, like wearing a mask," McKinlay said during an interview Friday on CNN’s New Day.

Palm Beach County commissioners will discuss making masks mandatory for the public on Tuesday, according to McKinlay. "I'm hoping my colleagues will agree with some of us who've made that ask," she said.

McKinlay said the public's resistance to wearing masks in public may come down to virus fatigue. "Florida opened up very quickly," she told CNN's Alisyn Camerota. "I think people thought that that was a return to normal."

Other counties in the state have moved to make masks a requirement. Orange County, Florida, Mayor Jerry Demings signed an executive order on Thursday mandating face coverings in the county, according to a statement from Demings.

Health experts are concerned Florida shows signs of becoming the next coronavirus epicenter. Florida reported 3,207 additional coronavirus cases on Thursday — the largest single-day count in the state since the pandemic, according to the state health department.

As the number of coronavirus deaths in the US approaches 120,000, former acting White House Chief of Staff Mick Mulvaney says the "raw number of cases" is not the right metric to use.

“The critical number is this: It’s the ratio between the number of people who need intensive care — who need hospitalization — and the capacity of our health care system,” Mulvaney told CNN’s Jim Sciutto.

Information about Covid-19 changes every day, and as testing increases, there are more cases, he said.

“I’m not trying to minimize what the disease is; I’m trying to put it in perspective,” he said.

In early March, President Trump announced he was replacing Mulvaney as his acting chief of staff. He now serves as US special envoy for Northern Ireland.

At the CPAC conference in February, Mulvaney said Trump’s opponents were capitalizing on growing coronavirus concerns. “They think this is what’s going to be what brings down the President. That’s what this is all about,” he said during the conference.

When asked by Sciutto if he was wrong, Mulvaney said that the information that the administration was receiving from the CDC did not indicate the widespread growth of coronavirus.

Back then, he said they were comparing the novel coronavirus to other coronaviruses — SARS and MERS — which largely did not affect the US.

The mayor cited an increase in the number of positive cases as the reason for the order.

Florida is among other states that is currently reporting its highest seven-day average of new coronavirus cases per day since the crisis began, according to a CNN analysis of data from Johns Hopkins University.

Under the mandate every person working, living, visiting, or doing business in Orange County is required to wear a face covering consistent with the current CDC guidelines while in any public place.

The order is set to go into effect at midnight on Saturday.

Florida Gov. Ron DeSantis brushed away questions about his culpability in aggressively reopening his state during a press conference this week. He blamed the surge in cases, in part, on crowded living conditions in migrant families.

Portugal seemed set up to be devastated by Covid-19, as a country with among the fewest intensive care beds per capita in the European Union.

But with 38,089 confirmed cases and only 1,524 deaths, according to the Johns Hopkins University tally, so far the opposite is true.

One of the reasons behind Portugal’s relative success could be the use of steroids to treat patients in Intensive Care Units (ICUs).

A new study by Oxford University has found this method to reduce inflammation in the lungs could reduce the risk of death for hospitalized patients.

“What we’ve seen is that in three days there is a significative improvement in respiratory function and we are able to start reducing respiratory support and extubate our patients,” Germano added.

Germano said around 60% of ventilated patients at his hospital have been treated with steroids, explaining that it is one of several tools that have helped staff keep the death toll for ICU patients at around 16%.

“We [also] have a team that does outreach, that goes out of the ICU and observes patients and what we do is ... early intubation and ventilation to the patients,” he added.

In addition to the techniques used in ICUs, Portugal has benefitted from mass testing and the government’s swift response to the coronavirus threat, according to the head of infectious diseases at the same hospital, Dr. Fernando Maltez.

“It was fundamental, for this strategy to be successful, the fact that the government decided in timely fashion to declare a state of emergency,” Maltez said, also praising the response of Portugal's health services.

Maltez and Germano both said the easing of anti-coronavirus measures has caused the number of confirmed cases to increase in the past few weeks, especially in and around Lisbon. Yet they added that so far they haven’t seen a surge that would overwhelm health services.

There are public health measures officials in Florida can implement to reduce risk of transmission of Covid-19 and avoid a shutdown, said Dr. Ashish Jha, director of the Harvard Global Health Institute.

A "shutdown is the most extreme version of what you need to do," Jha said Friday on CNN’s New Day. "What many of us in the public health community have been advocating is that let's do everything to prevent the shutdown."

A mask mandate, no large gatherings, and ramping up testing, tracing and isolation, are efforts that can curtail the virus, according to Jha.

"What I'm worried about is that we're ignoring it and hoping that the virus goes away by itself, which we know it won't," he said.

Florida is among other states that is currently reporting its highest seven-day average of new coronavirus cases per day since the crisis began, according to a CNN analysis of data from Johns Hopkins University.

Florida reported 3,207 additional coronavirus cases on Thursday — the largest single-day count in the state since the pandemic, according to the state health department. Florida's total reported cases climbed to nearly 86,000, according to data.

Florida could be the next epicenter, experts say.

A Covid-19 care center, described as a "mega-hospital," is being built in the Indian capital New Delhi and is due to be completed by the end of the month. The facility is set to have the capacity to treat 10,000 patients.

Around 10% of the beds would also have oxygen support, according to BN Mishra, the south Delhi district magistrate who is overseeing the operation.

"I have requested that the preparations are completed latest by July 30 and we can start taking patients by the first week of July," Mishra told CNN.

"We are trying to ensure that doctors of various specialties are available at the facility and that they have all the equipment necessary which is currently being arranged for, including air conditioners," Mishra added.

New Delhi has seen a recent surge in coronavirus cases. The capital currently has 49,979 infections, including 1,969 deaths.

Apart from the new hospital, the city is planning to supplement its bed capacity by using train cars.

Some 50 train cars with 800 beds each are stationed in the city and have been converted into isolation centers.

More than 8.5 million cases of novel coronavirus have been confirmed worldwide, including at least 454,000 deaths, according to Johns Hopkins University.

If you're just joining us, here are the latest developments.

US warned over reopening: More than 90% of Americans are still susceptible to Covid-19, said Dr. Ali Khan, dean of the College of Public Health at the University of Nebraska Medical Center. Her warning comes as ten states saw their highest daily number of cases this week and nearly two dozen states saw spikes in cases compared to last week.

Coronavirus apps: The UK government is abandoning its attempt to develop a coronavirus tracing app from scratch and will instead build one based on a system created by Google and Apple after repeated delays. Germany's government said its coronavirus smartphone app has been downloaded 9.6 million times since it was launched on Tuesday.

Beijing outbreak "under control": Chief epidemiologist at China's CDC Wu Zunyou declared the virus flare-up in the Chinese capital is already "under control." But the current outbreak in Beijing is the worst resurgence of the coronavirus yet, and authorities are still trying to track down its source. The cluster has infected more than 180 people as of Friday.

Cases surge in Indian capital: New Delhi is looking into increasing hospital beds and is ramping up testing as coronavirus cases in the city near 50,000. It comes as India reported 13,586 coronavirus cases nationwide in the past 24 hours, the biggest single-day jump in infections to date.

Yemen faces "nightmare": Millions of Yemenis could be infected with coronavirus and up to 85,000 people could die as the country's health system has effectively collapsed, the International Rescue Committee (IRC) said in a report today.

Brazil nears 1 million cases: It comes after another daily spike on Thursday. The health ministry reported another 22,765 new cases, bringing its total number of cases to 978,142.