Cyprus has offered to cover the cost of accommodation, food, drink and medication for tourists who test positive for Covid-19 during a stay on the popular Mediterranean island.

“The traveler will only need to bear the cost of their airport transfer and repatriation flight, in collaboration with their agent and/or airline," the Cypriot government announced earlier this week in a letter made public to media, tour operators and airlines.

The costs for their co-travelers and family members will also be covered, Cyprus said.

The country added that a 100-bed hospital will be made available exclusively for travelers who test positive.

Cyprus is reopening its hospitality establishments on June 1 and international air travel to the island will resume on June 9.

Initially all passengers arriving to Cyprus will be required to undertake a coronavirus test in advance (within 72 hours prior to travel), but by June 20th travel restrictions are expected be lifted entirely for a number of countries. Cyprus will retain its ability to randomly test some travelers.

The UK has temporarily shuttered its embassy in North Korea due to Covid-19 restrictions limiting the ability of staff to travel in and out of the country, according to the Foreign & Commonwealth Office (FCO).

“The UK has temporarily closed its embassy in Pyongyang and our staff have departed the country," the FCO said in a statement Thursday.
"This decision has been made because the DPRK [Democratic People's Republic of Korea] restrictions on entry to the country have made it impossible to rotate our staff and sustain the operation of the Embassy."

The FCO said that London maintains diplomatic relations with Pyongyang, and it will seek to re-establish a presence there, "as soon as we are able to return to smooth Embassy operations."

The UK has advised against all but essential travel to North Korea since August 2017.

The UK government announced last week that from June 8, international arrivals to the UK would be required to quarantine for 14 days upon arrival, with the exception of those coming from the Republic of Ireland.

The travel industry letter – sent on Wednesday – accuses the government of being “woefully slow to react” to the impact of the pandemic. It also accuses ministers of procrastinating “to the point of absurdity” on whether to support or oppose refund credit notes, which are sometimes offered to customers as an alternative to a cash refund.

Senior management from well-known luxury hotels such as The Dorchester, The Shangri-La, The Savoy and The Ritz were among those who endorsed the letter.

The CEO of tour operator Red Savannah, George Morgan-Grenville, said the quarantine plans were “poorly thought out, wholly detrimental to industry recovery and are more or less unworkable.”

Morgan-Grenville added that while travel companies usually compete “ferociously,” “on this issue, we are united.”

Responding to the letter, the Home Office defended the proposed measures in a statement sent to CNN on Thursday.

“It is right that we introduce these new measures now to keep the transmission rate down and prevent a devastating second wave.”
The statement also said the government continues to support businesses in the tourism sector “through one of the most generous economic packages provided anywhere in the world.”

The coronavirus pandemic and subsequent closure of schools in England has exposed “shocking levels” of childhood hunger, according to a Human Rights Watch (HRW) statement released on Wednesday.

HRW's statement criticized the British government's “failure” to ensure all pupils had sufficient food while schools remain closed, adding that the lapse “violates” a child’s “right to food.”

The organization said a government-commissioned voucher system for those who normally receive free school meals was “plagued with problems” and “deeply flawed.”

The electronic vouchers are designed to enable families to buy meals at selected supermarkets. The scheme began two weeks after schools closed in mid-March, and some families reported waiting weeks to receive the vouchers, HRW said.

A May 4 survey by the Food Foundation estimated that 200,000 children had to skip meals by the end of April, and 31% of children entitled to free school meals “did not have adequate alternatives.”

HRW has called upon the UK Department of Education to “urgently address” flaws in the voucher scheme, and also transition to a cash transfer system “that offers families and children great dignity.”

On May 26, a representative for the department told HRW that “no system of this magnitude to provide free school meals has been implemented in such a short period of time before.” They added that authorities and the voucher company had worked hard to reduce waiting times and improve the voucher ordering process.

CNN has requested comment from the UK Department of Education.

UK Labour Party leader Keir Starmer has demanded that the British government bring in a 24-hour guarantee for coronavirus testing.

“I'm calling on the Prime Minister to introduce a guarantee that no one will have to wait longer than 24 hours to get a coronavirus test and 24 hours to get the result. Boris Johnson must put the nation’s health first,” Starmer said on Twitter.

England’s contact tracing system takes effect today. Anyone who tests positive -- or comes into contact with someone who has -- will be required to self-isolate for 14 days.

South Korea will close all public facilities in Seoul and its surrounding metropolitan area starting tomorrow after a cluster of infections emerged at a logistics center near the South Korean capital.

Parks and retreat facilities, and art galleries, museums and theaters operated by the government will be shut until June 14, Health Minister Park Neung-hoo announced.

Government-hosted events in the area will either be canceled or postponed, Park said. He also advised that private businesses do the same and residents refrain from going outside or holding public events until June 14 as well.

Public health experts have regularly praised South Korea's response to the global pandemic, which emphasized widespread testing and contact tracing in order to stop the virus spread. To date, 11,344 Covid-19 cases and 269 virus-related deaths have been confirmed, according to a tally by Johns Hopkins University.

However, a new uptick in cases has authorities worried. Public health officials said 79 new novel coronavirus cases were recorded yesterday the most in a single day since April 5.

Vice Health Minister Kim Gang-lip said that 54 of the patients identified Wednesday were traced to a logistics center in Bucheon, a satellite city 25 minutes from downtown Seoul. As of 11am Thursday, Park said 82 cases are linked to the logistics center cluster.

More than 4,150 people connected to the Bucheon cluster have been put under quarantine and 83% of them have been tested, Kim said. The rest will be tested today.

Frontline medical workers in the US, UK and elsewhere may face major risks in their efforts to battle the coronavirus pandemic, but they've also seen an outpouring of public appreciation. In Russia, health workers say they face fear, mistrust -- even open hostility.

Tatyana Revva, an intensive care specialist in the city of Kalach-on-Don in southern Russia, shared a video in late March about equipment shortages with the Doctors Alliance, an advocacy group aligned with Russia's political opposition. After the video went viral, she said, she was summoned by local police.

"I was called to the police and gave a statement with a lawyer, but another statement against me was sent to the prosecutor's office," Revva told CNN via Skype after finishing a night shift.

Revva said law enforcement investigators subsequently checked the availability of PPE and ventilators at her hospital.

"But the check was carried out a month after I flagged the problems," she said. "You can imagine how much had been purchased in a month after the buzz the video made."

Revva says she has not been fined by police, but now fears professional retaliation.

Police have not responded to CNN's request for comment. The hospital administration could not immediately be reached for comment, but the hospital's chief doctor, Oleg Kumeiko, said in a March 29 statement on YouTube that the information posted online about PPE shortages was "absolutely untrue."

Rumors and conspiracy theories abound in Russia about Covid-19: that the virus was invented by doctors to control society; that medical workers are hiding the true extent of the casualties from the public; or that medical personnel are falsely attributing deaths to Covid-19 to receive more money from the government.

UK-based budget airline easyJet has announced plans to reduce the size of its workforce by up to 30% as it tries to cut costs in response to the coronavirus pandemic.

In a statement released Thursday, the airline said it doesn’t expect market demand to return to pre-coronavirus levels until 2023.

“Against this backdrop, we are planning to reduce the size of our fleet and to optimise the network and our bases,” easyJet CEO Johan Lundgren said in a statement.
“As a result, we anticipate reducing staff numbers by up to 30% across the business and we will continue to remove cost and non-critical expenditure at every level. We will be launching an employee consultation over the coming days.”

Easyjet grounded its entire fleet in March but plans to resume some UK and France routes by June 15.

The first tragedy of America's bleak coronavirus milestone is that 100,000 people didn't have to die. The second is that no one knows how many more will perish before the pandemic fades.

The desperate toll passed into six figures on Wednesday afternoon: 100,000 victims, who were living Americans several months ago, when the viciously infectious virus made landfall. The landmark is a story of lost mothers, fathers, grandparents, siblings, spouses and even children. Families are shattered, and the dying expire alone. They can't even be mourned owing to social distancing — one of Covid-19's cruelest impositions.

The virus has been disproportionately infecting communities of color. Black Americans represent 13.4% of the American population, according to the US Census Bureau, but counties with higher black populations accounted for more than half of all Covid-19 cases and almost 60% of deaths as of mid-April, a study by epidemiologists and clinicians found. The virus has also exploited monetary divides, as infections at meat-packing plants show, while many white-collar workers work from home.

The victims also include the living — the more than 30 million Americans whose livelihoods disappeared in the most dramatic collapse in American economic history. A generation born amid the fear of 9/11 just graduated high school during another national trauma. Families near and far haven't gathered for months — and may not for months to come.

But a pandemic — a signature moment alongside civil war, world wars, assassinations and economic crises, in the near 250-year history of the US — is also a political, governmental story. Politicians, few so vociferously as President Donald Trump, want the credit when things go well. So must they carry the can when they fail.

Covid-19's assault is a once-in-a-century event, and no set of detailed plans, war games and batch of epidemiological theories could have prepared the nation for every unknown challenge. 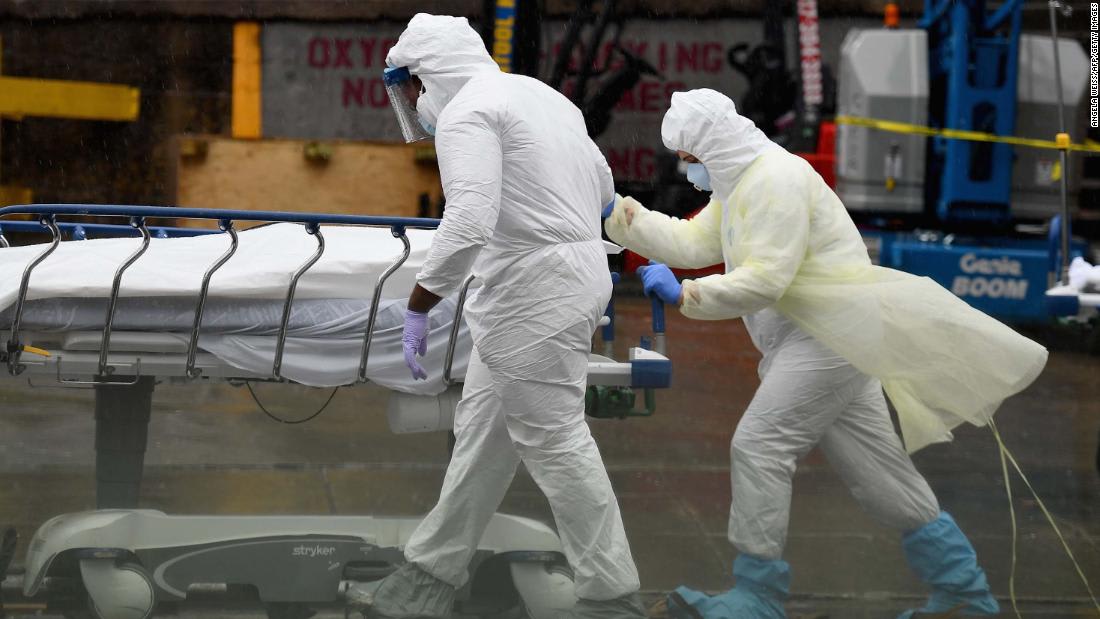