Italian Prime Minister Giuseppe Conte said the country must approach the re-opening of the economy with "prudence."

"We are facing a calculated risk, knowing that the epidemiological curve could rise again," Conte said.

"The epidemic curve is encouraging … we are now in the condition to face this new phase with faith and responsibility," he added.

The country has been easing some measures and the lockdown will be further relaxed on Monday. Retail stores, restaurants and hotels will be advised to do temperature checks, require face coverings and maintain social distancing among customers.

Conte announced travel restrictions will be lifted for those traveling from European countries by June 3.

Eight additional sailors who had returned to the USS Theodore Roosevelt aircraft carrier have retested positive for coronavirus, a defense official told CNN.

The sailors were initially removed from the ship to self-quarantine and were allowed back on board after testing negative twice.

The official said it is not clear if the sailors were reinfected or if very low levels of the virus remained in their bodies that testing had not detected.

The news comes after five other sailors retested positive earlier this week.

The new positive tests were first reported by Politico.

Some background: In March, more than 1,000 sailors from the carrier's nearly 4,900-member crew tested positive following an outbreak aboard the ship. The Navy had been returning sailors to the Roosevelt following a period of quarantine and isolation in the hopes of getting the aircraft carrier to sea as soon as possible.

The Navy said Thursday that more than 2,900 sailors have been moved back on board. 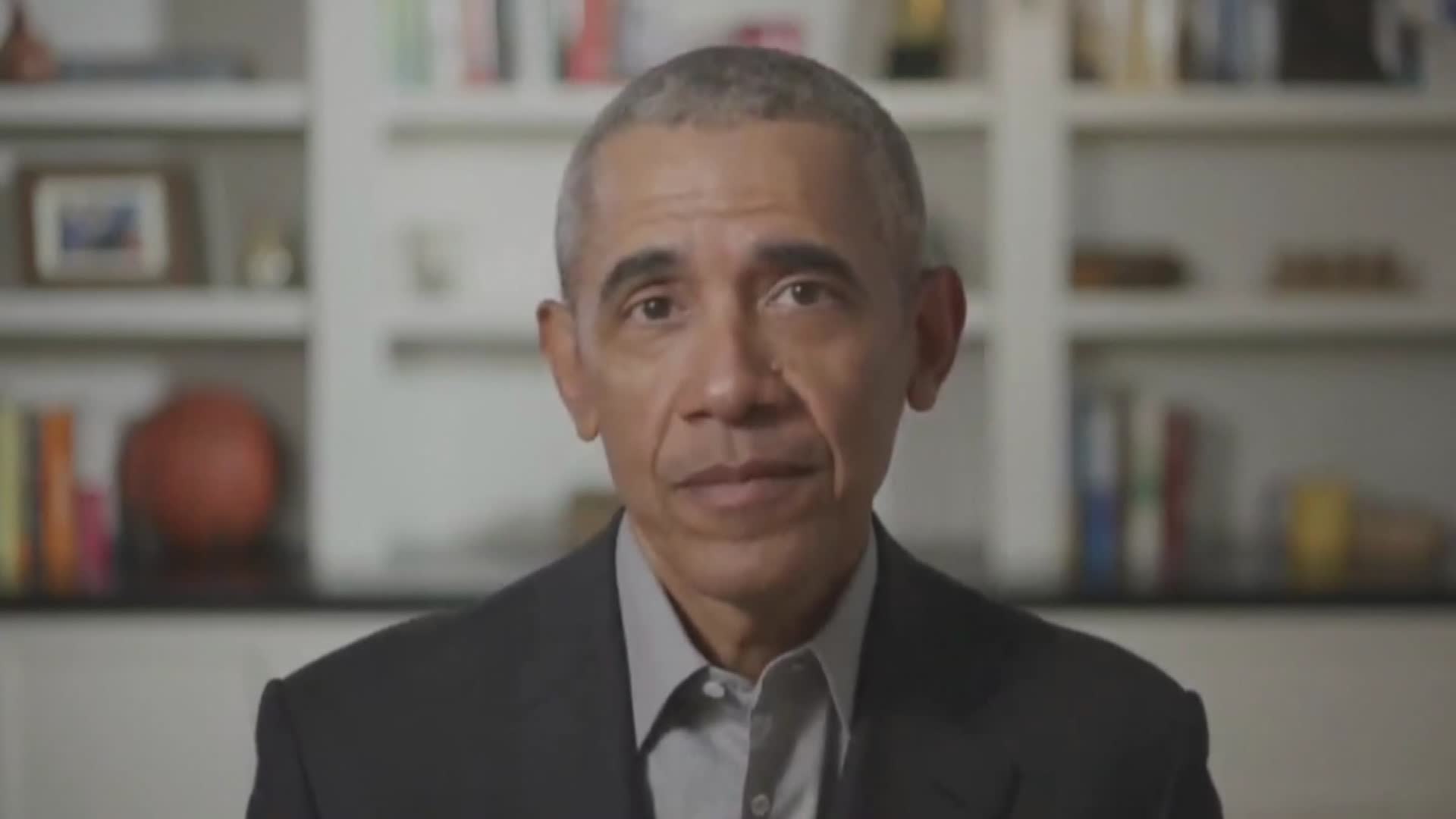 Former President Barack Obama criticized the "folks in charge" for the handling of the coronavirus pandemic while delivering a virtual commencement address for historically black colleges and universities on Saturday.

"More than anything, this pandemic has fully, finally torn back the curtain on the idea that so many of the folks in charge know what they’re doing. A lot of them aren’t even pretending to be in charge," Obama said.

He addressed how the coronavirus pandemic has disproportionately affected black communities.

"A disease like this just spotlights the underlying inequalities and extra burdens that black communities have historically had to deal with in this country. We see it in the disproportionate impact of Covid-19 on our communities," Obama said.

"This is a reasoned and responsible decision by Governor Cuomo that will enable horse racing to resume in a way that prioritizes health and safety while recognizing that NYRA is the cornerstone of an industry responsible for 19,000 jobs and $3 billion in annual economic impact," NYRA President/CEO Dave O'Rourke said in a statement.

O'Rourke says the group has developed a comprehensive safety plan to protect the community and plans to announce race dates for the 2020 spring/summer meet at Belmont Park in the "very near future."

The NYRA had not officially postponed the event and it's unclear whether the organization will keep the same schedule for the race.

"The National Research Council of Canada will be working with the manufacturers, so that if these vaccine trials are successful we can produce and distribute it here at home," Trudeau told reporters on Saturday.
"This is encouraging news," he added.

While Trudeau did not discuss where the possible vaccine was being developed, the National Research Council announced earlier this week that it would collaborate with CanSino Biologics Inc, a company based in China.

The company's vaccine effort is backed and funded in part by the Chinese government.

The race to stop the virus: As of Friday, there were at least 118 potential Covid-19 vaccines in the works around the world but only eight were in clinical trials, the World Health Organization said.

The website for Arkansas' Pandemic Unemployment Assistance Program has been shut down after a data breach, Gov. Asa Hutchinson said.

Hutchinson said at a news conference this afternoon that an applicant “seems to have illegally accessed the system.”

When it was discovered, it was necessary to shut the system down and contact authorities, he said.

“Steps have been taken consistent with our state requirements for any data breach, and the sequence of events that we have to go through in our protocols is that law enforcement is notified of the breach," Hutchinson said.

Hutchinson added that if during the investigation it became evident that any personal, sensitive data was compromised, additional steps would be taken, including notifying the applicants or anyone that may have had their personal information compromised.

Also, if necessary, a credit monitoring program for those that might have been impacted could be offered.

“This is something we've had some experience with," Hutchinson said. “It's one of the reasons that we have a good cyber insurance program here in the state.”

In terms of the Pandemic Unemployment Assistance Payments, a team will continue to work through the weekend to get the system up, payments processed, with the goal of getting “money out the door, next week," Hutchinson said.

It's about 3 p.m. in New York. Here are the top coronavirus headlines you may have missed this afternoon.

The Spanish government will re-open some airports on several islands and in the southern part of the country to international travel, the country’s Transport Minister Jose Luis Abalos, announced on Saturday

"Tomorrow [Sunday] I will sign a resolution so the airports of Tenerife Sur, Alicante-Elche, Sevilla, Menorca and Ibiza to also become designated points of entry, capable of handling international public health emergencies," Abalos tweeted. “Little by little, other centers will be opened.”

Some context: The announcement from the Transport Ministry comes as roughly 70% of Spaniards enter either phase one or two of de-escalation, as the government eases coronavirus restrictions in some areas.

The remaining 30% of people live in or around the two largest Spanish cities, Barcelona and Madrid, and will remain in phase zero.

Spain limited the points of entry for international travel as it imposed a strict nationwide lockdown to stop the spread of the novel coronavirus.

Government restrictions of non-emergency travel will continue until June 15, according to Spain's official government bulletin.

As coronavirus cases began spiking in New York City in March, officials worried that the city's notorious jail system on Rikers Island could become a powder keg inside the epicenter of the pandemic.

In the weeks since, correctional officials handed out masks. They increased cleaning. And with a focus on creating more space for social distancing, the city pushed through the release from its jails of more than 2,600 people considered at low risk to commit a crime and high risk to contract the disease, with many of the inmates gaining their release through court decisions argued by advocacy groups.

Despite these efforts, critics say there is still not enough sanitizing, social distancing and wearing of masks to stamp out an outbreak among 362 people currently incarcerated and more than 1,300 Department of Correction workers, according to data released by the Board of Correction on Friday.

Since March, three inmates and 10 correction officers have died, according to New York City's Department of Corrections.

Across 37 states, 88 inmates and 15 correctional staffers died from Covid-19 between January 21 and April 21, the US Centers for Disease Control and Prevention reported. In all, 4,893 inmates tested positive, as did 2,778 correctional staff.

"Jail is inherently not a place where you can socially distance. It's just not built that way," said Caitlin Miller, an attorney with Legal Aid Society's parole revocation defense unit.

"It was inevitable that coronavirus was going to get to Rikers, and once it did, it would be a complete disaster. And that's exactly what we're seeing," Miller said.

Law enforcement officials say releasing inmates to curtail a public health crisis behind bars has increased the risk of crime, with the New York Police Department reporting about 150 people released from Rikers having been rearrested, some more than once. Some crimes were violent offenses, including domestic violence and attempted rape, police said.

Advocates and a watchdog agency for the jail system contend that while correction officers wear masks, inmates don't nearly as often. Correction workers also warn their jobs are more unsafe than ever, as the number of employees with the coronavirus continues to climb.