The US state of Indiana is working to go back and identify every death they think may have been associated with Covid-19 in order to get a more accurate count, according to Indiana Health Commissioner, Dr. Kristina Box.

Dr. Box said the state has tracked cases that go back to at least mid-February, weeks before Indiana’s first reported case in early March.

"There are other individuals that were in the hospital, that may have been discharged with the diagnosis of Covid-19. And that's what we're in the process of trying to make sure that we know all of those individuals, in addition to those deaths," Dr. Box said.
"Because if we only report on the other suspected Covid-19, or presumed Covid-19 deaths, as other states are, but we don't have that underlying number of other people that were sick but didn't die from it, it's going to really inflate that the death rate number for the states.”

Dr. Box said while Indiana should expect to see an increase in deaths posted on Friday as a result of these efforts, the increase will add fewer than a hundred fatalities to the state total.

Nevada Gov. Steve Sisolak has spoken out against comments by the mayor of Las Vegas that it is time for businesses -- including casinos -- to get back to work.

"We are clearly not ready to open," Sisolak told CNN’s Anderson Cooper on Wednesday night.

What the mayor said: Las Vegas Mayor Carolyn Goodman told Cooper earlier Wednesday that the government should end its restrictions, and private businesses would be able to decide for themselves how best to avoid spreading the coronavirus.

Goodman volunteered her city as a "control group" to see if looser rules resulted in a major outbreak.

Pushback: But Gov. Sisolak said: "I will not allow the citizens of Nevada -- our Nevadans -- to be used as a control group."

The most prominent casinos of what is known as the Las Vegas Strip sit outside the city limits and are under the jurisdiction of Clark County. The county’s commission chairwoman Marilyn Kirkpatrick issued a statement Wednesday evening saying, "Soon, we’ll be able to invite the world back to our city, but that time isn’t here yet."

Gov. Sisolak said visitors will be welcomed back to Las Vegas, but only when it can be done safely. "We want to welcome them back to the lights on The Strip," Sisolak said, "but that's not today, and that's not tomorrow."

The novel coronavirus has now infected more than 2.62 million people and killed at least 183,000 worldwide, according to Johns Hopkins University.

This post was updated to more accurately describe Mexico.

Starting Thursday, coronavirus testing will be available to all critical workers that are on the front lines -- regardless of whether they have symptoms, Los Angeles Mayor Eric Garcetti announced in a news conference today.

"Health care professionals, grocery store workers, first responders, and critical government personnel can get a test even if you don’t have symptoms," Garcetti said.

"We want to make sure that they are healthy and that they have the peace of mind knowing they’re healthy."

There are 34 testing sites across the city and county of Los Angeles where critical workers can sign up for a test.

On Tuesday, the state of California expanded testing restrictions to include the testing of asymptomatic people who work or live in a high-risk setting.

California has reported at least 37,603 coronavirus infections, including 1,434 deaths, according to data compiled by Johns Hopkins University.

Eleven Native tribal organizations affected by coronavirus -- including the hard-hit Navajo Nation -- are suing the US federal government over relief money set aside by Congress for Native Americans.

The CARES Act earmarks $8 billion to be split among Indian tribes, but the lawsuit says the Treasury Department is preparing to include Alaska Native Regional Corporations in the group. These private corporations were established in a lawsuit settlement decades ago for the benefit of Alaskan Natives, but the new complaint argues they are not true tribal organizations and are not entitled to the money.

The Navajo Nation’s government employs more than 5,000 people, according to the lawsuit, and revenue has dried up as tribal businesses have shut down. As of Wednesday night, the Nation had confirmed 48 Covid-19 deaths and more than 1,200 infections.

"Our Nation’s government is in dire need of support for the critical medical and community needs of our people.  We are literally fighting for dollars to save lives," said Navajo Nation Attorney General Doreen N. McPaul in a written statement.

The lawsuit argues that including the Alaska Native Regional Corporations in the fund could cost each tribe an average of $4 million. 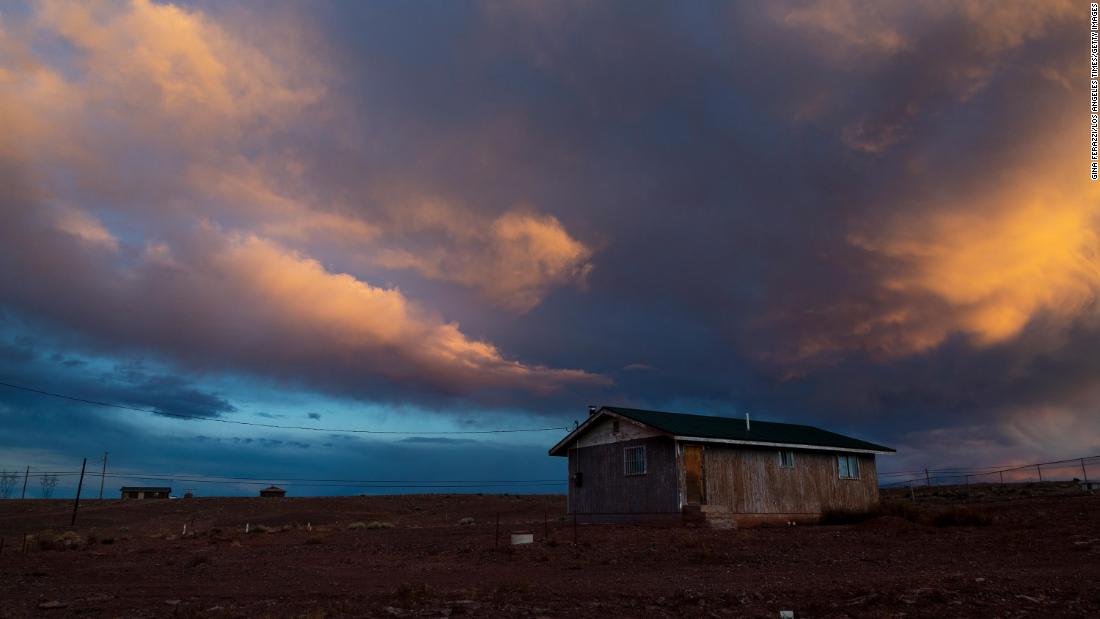 Amid coronavirus, tribes say they aren't getting help they need from federal government

In the largest number of recorded day-to-day cases in Mexico since the outbreak began, an additional 1,043 people tested positive for the virus. The increase raised the total number of cases to 10,544 in the country.

The number of reported deaths from Covid-19 is 970, according to Mexican health authorities.

To end the coronavirus pandemic, the US is either going to have to continue with extreme social distancing measures or do it with "ubiquitous" testing, according to Dr. Anish Jha, the director of the Harvard Global Health Initiative.

"We have estimated we need at least three times as much testing as we have right now," Jha said said Wednesday on CNN’s Erin Burnett OutFront. "We have been flat for like three and a half weeks. We have made no progress.
"I haven’t met a single professional who doesn’t think we need a lot more testing and we’re just not making progress," he said. "It’s baffling, because the alternative is to stay shut down. That is not an alternative anybody likes."

Since the coronavirus is still so new, scientists are working overtime to generate new data to understand how it spreads. A recent study found one person at a restaurant spread the disease to others sitting at nearby tables.

"No one is going to go to restaurants if they think they’re going to get infected, so the only way to bring confidence back into our economy is to have widespread testing so we know there aren't a ton of infected people going into restaurants, going into coffee shops. This is how we open up our economy," Jha said.
“This choice between economy versus health has always been a false choice and the only way out of it is social distancing or testing. Those are our two choices.”
"I like testing better, as a better way to keep our economy going."

Read more about what went wrong with US testing: 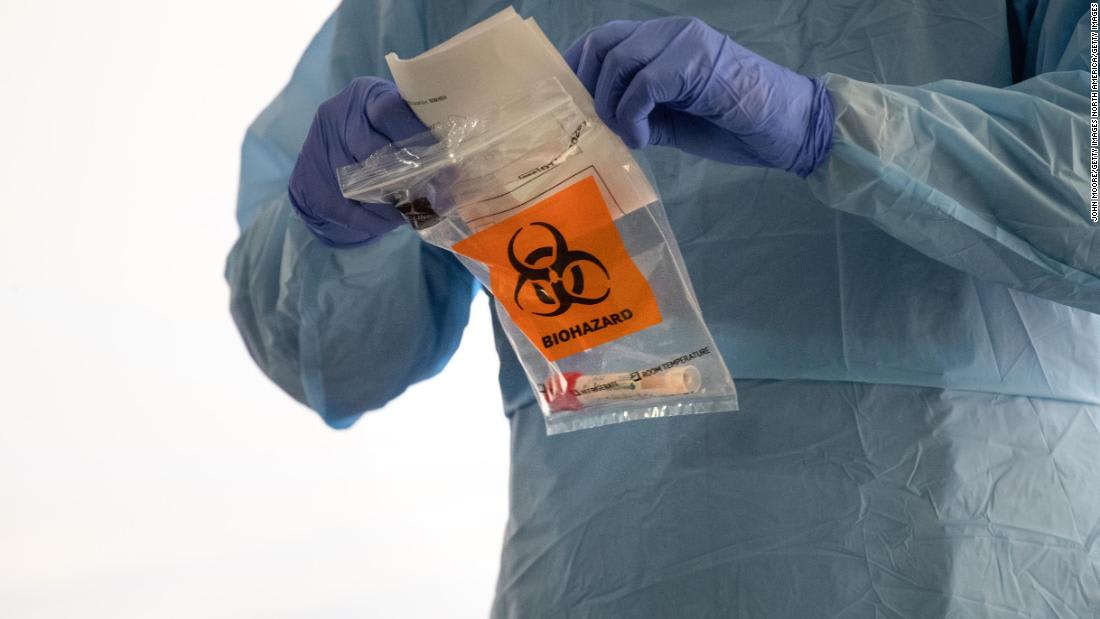 Here's why the US is behind in coronavirus testing

The sources also say the timing could change.

Blaugrund was speaking with NYSE employees, heads of firms and brokers on the 40-minute call. He said when the floor does open, there will be a reduced head count on the floor and social distancing guidelines will be followed, according to the two sources.

The same protocol the NYSE followed just before the floor closed will also be in effect, meaning temperature checks for anyone entering the building, according to the sources.

Blaugrund said the NYSE Arca Options trading floor in San Francisco might reopen on May 3, the two sources said.

It found that, overall, about 20% of Covid-19 patients treated at Northwell Health died, and 88% of those placed on ventilators died. A ventilator is a device that forces air into the lungs of patients who cannot breathe on their own because of severe pneumonia or acute respiratory distress syndrome.

Other, smaller reports have indicated that patients who need ventilation are unlikely to survive.

Luckily, just 12% of the patients in the study needed ventilators, Dr. Safiya Richardson at the Feinstein Institutes for Medical Research, Northwell Health, and colleagues found.

But this study, published in the Journal of the American Medical Association, shows how dire the outlook is for patients with severe Covid-19 disease.

The team looked at the electronic health records of 5,700 patients with coronavirus disease hospitalized at Northwell Health. Final outcomes were known for 2,634 of them.

The records support what doctors have been saying about the coronavirus: most people who become severely ill have some sort of so-called underlying condition. More than half, or 57%, had high blood pressure, 41% were obese and 34% had diabetes.

“Of the patients who died, those with diabetes were more likely to have received invasive mechanical ventilation or care in the ICU compared with those who did not have diabetes,” the researchers wrote.

They also confirmed that men were more likely to die than women, and no one under the age of 18 died.

The symptoms of infection were far from clear-cut. About a third of all patients showed up with fevers, 17% were breathing too fast and just under 30% needed extra oxygen. On average, patients were sent home after four days.

But 14% were treated in intensive care, 3% needed intensive dialysis and 21% died.

Since final data was only available on about half of the patients, it’s possible that more of those on ventilators survived, the researchers said -- something that would drive down the 88% fatality rate for that group.

“This study reported mortality rates only for patients with definite outcomes (discharge or death), and a longer-term study may find different mortality rates as different segments of the population are infected,” the Northwell Health team wrote.