For weeks, Sydney's beach lovers have had to stay away from the sand and surf.

But starting Monday, some beaches in the city's eastern suburbs will be open for "exercise purposes only," according to the local authorities.

Three weeks ago, all Randwick City beaches were closed to discourage large groups congregating at the beach.

"Living along the coast, I know how important our beaches are to the mental and physical health of so many in the community," said Mayor Danny Said.
"The past three weeks have been difficult as we’ve all had to make changes and sacrifices to our daily routines."

Not back to normal: Even though beachgoers are allowed back, they must maintain a distance of 1.5 meters (4.9 feet) between each other, limit groups to two people and move on once they have completed their exercise. Sitting or sun-bathing on the sand will not be permitted, the council said in a news release.

India has reintroduced a ban on the delivery of non-essential items by e-commerce companies -- reversing an earlier decision to lift the restriction.

In an order issued Sunday, the Ministry of Home Affairs said companies such as Amazon and Flipkart wouldn't be allowed to deliver non-essential items until May 3.

Nothing has changed for essential items. Since the lockdown was enacted last month, e-commerce companies have been allowed to deliver groceries and other essential goods. That remains the case.

Mika is worried. As a sex worker in Japan, she used to see three or four clients a day -- then the coronavirus pandemic hit. Now, with people staying home and avoiding close contact, she's out of clients and out of money.

With no savings or other sources of income, Mika says she is living off borrowed money. She has tried to find other jobs, but nobody's hiring in the middle of an economic crisis. At this rate, she might not be able to pay rent or afford basic necessities, let alone pay off the debt she has recently taken on.

"I'm worried if I will have a place to live or if I can find a job to get money to live," she said, using a pseudonym to protect her privacy. "I worry about (my health) of course, but now I worry more about how to survive."

Sex workers across Japan have been hit hard by closures and restrictions due to the pandemic. The entire country is under a state of emergency, with many businesses ordered to shutter and people advised not to go out.

Japan has recorded nearly 11,000 coronavirus cases nationwide, including at least 236 deaths, according to Johns Hopkins University.

Softening the economic blow: The central government has launched a massive stimulus package worth 108 trillion Japanese yen ($1 trillion). After some controversy, sex workers are eligible to apply for aid, under certain conditions -- a move some activists have hailed as a sign of progress for an industry that has long suffered social stigma.

But for many sex workers, the package offers little reassurance -- and its rules for eligibility seem opaque and restrictive. Some aren't sure how to apply for benefits without effectively outing themselves.

"(The government) haven't clearly said they will help everybody," Mika said. "There are many people unable to eat and survive without working."

A total of 1,553 new Covid-19 cases have been reported in India in the past 24 hours -- the country's largest single-day spike during the epidemic, according to a CNN count.

Another 36 deaths were also reported.

India has confirmed a total of at least 17,265 cases of coronavirus, including 543 deaths, according to the country's Ministry of Health.

A total of 2,547 people have recovered or been discharged.

Some 401,586 samples have been tested as of April 19, according to the Indian Council for Medical Research.

The highest number of cases are being reported from the states of Maharashtra and Gujarat, and the union territory of Delhi.

Over the weekend, 15 pro-democracy activists were arrested in Hong Kong.

According to the Hong Kong police, the 15 were arrested on charges that included organizing and participating in unauthorized assemblies between August and October last year, and announcing unauthorized public processions in September and October.

Questions over timing: Some people – including high-profile pro-democracy activist Joshua Wong – have raised questions over the timing of the arrests, given that the world is currently dealing with the coronavirus pandemic.

In an interview Monday, CNN asked 81-year-old Hong Kong Democratic Party founder Martin Lee -- who was among those arrested -- about the timing of the arrests.

What the Hong Kong government says: In a statement Sunday, a Hong Kong government spokesman said that investigations by law enforcement agencies and prosecutions by the Department of Justice are carried out in strict accordance with the law. The spokesman pointed to the city’s mini-constitution, the Basic Law, which says that Hong Kong’s Department of Justice shall control criminal prosecutions free from any interference.

"The prosecutors have always been discharging this constitutional duty independently and professionally, without fear or favour. No one should interfere or attempt to interfere with independent prosecutorial decisions which are based on an objective assessment of all admissible evidence and applicable laws, made strictly in accordance with the Prosecution Code which is available to the public," the spokesman added.

The spokesman added that cases will not be handled any differently due to political beliefs of the person involved.

"As legal proceedings are on-going, it is inappropriate for anyone to comment on the cases as it would create a public discussion which may amount to a trial by the public. No one should embark upon baseless speculations. These types of accusations may be perceived as purporting to influence the proper discharge of public duties," the spokesman said.
"The rule of law is a core value in Hong Kong. Any unfair and unfounded allegation made with a view to undermining and discrediting our independent criminal justice system is vehemently refuted."

Germany has recorded one of its lowest rates of new coronavirus cases and virus-related deaths in the past 24 hours, the German center for disease control, the Robert Koch Institute, said on its website on Monday.

According to the Institute, 1,774 new infections were confirmed for Sunday, bringing the total number of cases in Germany to 141,672.

The death toll in the country climbed by 110 to 4,400, according to the data. An additional 3,500 people recovered from the disease.

The background: Over the past week, the number of new coronavirus cases in Germany has sunk lower, but the daily death toll has risen.

While the Robert Koch Institute has said physical distancing measures are working, it has also warned in the past that weekend infection numbers can be inaccurate because some labs have a lag in sending their results.

India's Prime Minister Narendra Modi has asked his people to come together to face the challenge of the coronavirus pandemic.

“Covid-19 does not see race, religion, color, caste, creed, language or border before striking,” he said in a post on social network LinkedIn. "Our response and conduct thereafter should attach primacy to unity and brotherhood."
"We are in this together," he added.
"Unlike previous moments in history, when countries or societies faced off against each other, today we are together facing a common challenge. The future will be about togetherness and resilience."

The background: Activists in the country have accused the Indian government of marginalizing minorities during the coronavirus crisis.

Modi’s comments come weeks after the first set of cases emerged from a virus hot spot at a mosque in New Delhi.

Thousands of Muslims linked to the Nizamuddin Markaz Mosque in the capital have tested positive for coronavirus. Police have also reported incidents of Muslims with suspected links to the mosque being beaten.

New work culture: Modi also shared his thoughts on how the lockdown has changed lifestyle and the work environment.

"Today, the world is in pursuit of new business models. India, a youthful nation known for its innovative zeal can take the lead in providing a new work culture," he wrote.

A total of 17,265 coronavirus cases, including 543 deaths, have been confirmed in India, according to the Ministry of Health and Family Welfare.

Even after three tumultuous years in which US President Donald Trump has shredded the decorum of his office, his unwillingness to provide unifying leadership still has the power to shock.

Trump's daily coronavirus task force press briefing has become the chief exhibit in this deficit of national stewardship and has largely shed any purpose in conveying useful information at a fraught moment -- if that was ever the aim.

Instead, the President spends his time perpetually trying to repair his own image by disguising his belated and faulty response to the emergency.

It didn't have to be this way.

Despite criticism of the administration, no White House -- Republican or Democratic -- could have predicted every twist of this crisis given the enormity of the political and economic upheaval that has overtaken the country. Not all failings in testing and supplies are personally Trump's fault.

But his refusal to accept any responsibility at all raises questions about what he thinks the presidency, a problem-solving job of last resort where the buck stops, is actually for.

The President's plan to use Sunday's briefing to polish his own personal narrative became clear when he read out and held up a Wall Street Journal opinion column praising his leadership.

He also played an out-of-context video of New York Democratic Gov. Andrew Cuomo praising his administration's work -- including on providing ventilators -- and said reporters should praise him too.

Yet Trump insisted after his trawl for personal credit: "It's not about me. Nothing is about me."

This came on the day when US deaths from the pandemic topped 40,000 and raced upwards, though Trump claimed he had saved a million lives through his leadership -- despite taking several months to recognize the magnitude of the unfolding disaster. 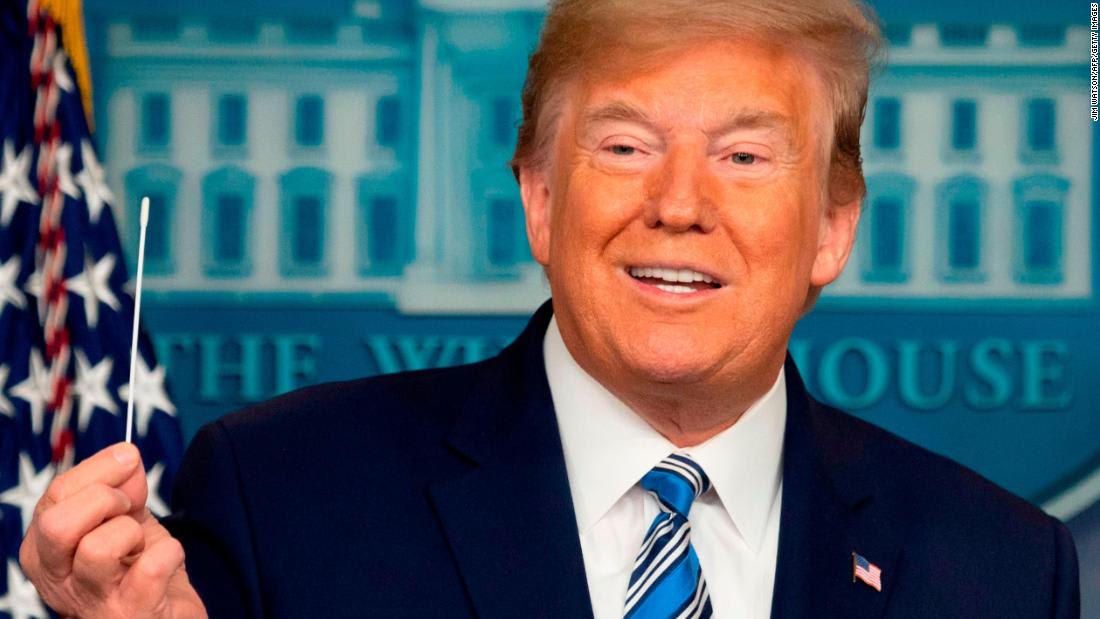 Trump shocks in time of crisis with his standard approach

New Zealand's Prime Minister Jacinda Ardern has announced the country will stay in its strict lockdown for five additional days.

The country was scheduled to come out of its level 4 lockdown -- the highest level on the alert system -- on Wednesday at 11.59 p.m. local time. However, Ardern said on Monday that the measures would continue until next Monday at 11.59 p.m.

That means New Zealand will remain under strict lockdown measures -- which require all non-essential workers to remain home -- during the upcoming three-day weekend. Next Monday is a public holiday in New Zealand for Anzac Day, a day of remembrance for soldiers killed in conflict.

The decision comes despite New Zealand seeing a dwindling number of coronavirus cases over the past few weeks. On Monday, New Zealand reported nine new cases, bringing the country's total reported to 1,440. Of those, 12 have died and 974 have recovered.

What Ardern said: The prime minister praised New Zealanders, saying she couldn't be prouder of the start they made to curbing the spread of the virus.

"We have done what very few countries have been able to do," she said. "We have stopped a wave of devastation."

She noted that New Zealand had one of the highest testing rates in the world, with more than 85,000 tests completed. The country also has one of the lowest mortality rates and a low rate of transmission, with each case infecting less than one additional person, she said.

"My message to New Zealanders is that you have sacrificed too much to lose those gains now," Ardern said.

What happens next? Next Monday, the country will move to a level 3 alert for two weeks. Cabinet will review whether to extend that on May 11.

Under level 3, the country will still essentially be under lockdown, but there will be an easing of restrictions. Schools can open. People will be able to buy takeaway food, and take part in more recreational activities, such as swimming at the beach. Up to 10 people will be allowed to gather for weddings and funerals.