Spanish-bought ventilators and other medical equipment held in Ankara by Turkish authorities will take off for Spain on Monday, Spanish foreign minister Arancha González Laya said in an interview with Spanish network Antena 3.

The equipment is expected to be available for distribution among regional governments in Spain on Tuesday. The ventilators, produced by a company in Turkey, have been held by local authorities in Ankara since Friday.

On Friday, the foreign minister said the ventilators would not arrive on time because “the Turkish government understands that they are a priority for the treatment of its patients.”

However, Ankara said that the exporting company lacked the proper authorization because Turkey introduced strict controls on the export of medical equipment a month ago, as the novel coronavirus in the country started to worsen.

The situation was resolved late on Saturday, with the Spanish foreign minister tweeting thanks to her Turkish counterpart for authorizing the export.

“We will always stand by our friend Spain,” Turkish foreign minister Mevlut Cavusoglu tweeted back. “We will overcome these difficult times together.”

Smaller shops, DIY shops and garden shops will reopen as of April 14, Kurz said at a press conference.

All shops, shopping centers and hairdressers will open as of May 1, while restaurants and hotels will open in mid-May at the earliest, in a step-by-step system.

No major events will be held until the end of June, Kurz said.

There will be home-schooling until the middle of May, and decisions on schooling will be made towards the end of April.

Kurz added that social distancing and the wearing of masks must be adhered to where necessary.

The situation in Austria: There have been more than 12,000 confirmed cases in Austria, according to figures from Johns Hopkins University. At least 200 people have died.

“People are fighting over the products to fight the coronavirus,” she said in an interview with Spanish broadcaster Antena 3, explaining that the country is looking for alternative producers as the main global supplier is not able to meet demand.
“The Chinese market is very complicated because the demand is much greater than the supply," she said.

The foreign minister said that Spain was prioritizing contracts with “exclusive” supplies but also incentivizing local companies to produce some of the equipment instead of buying it from abroad.

“National production is a very important aspect and will allow us not only to tackle the coronavirus on national territory but also to help other countries that do not have that many resources,” she said. 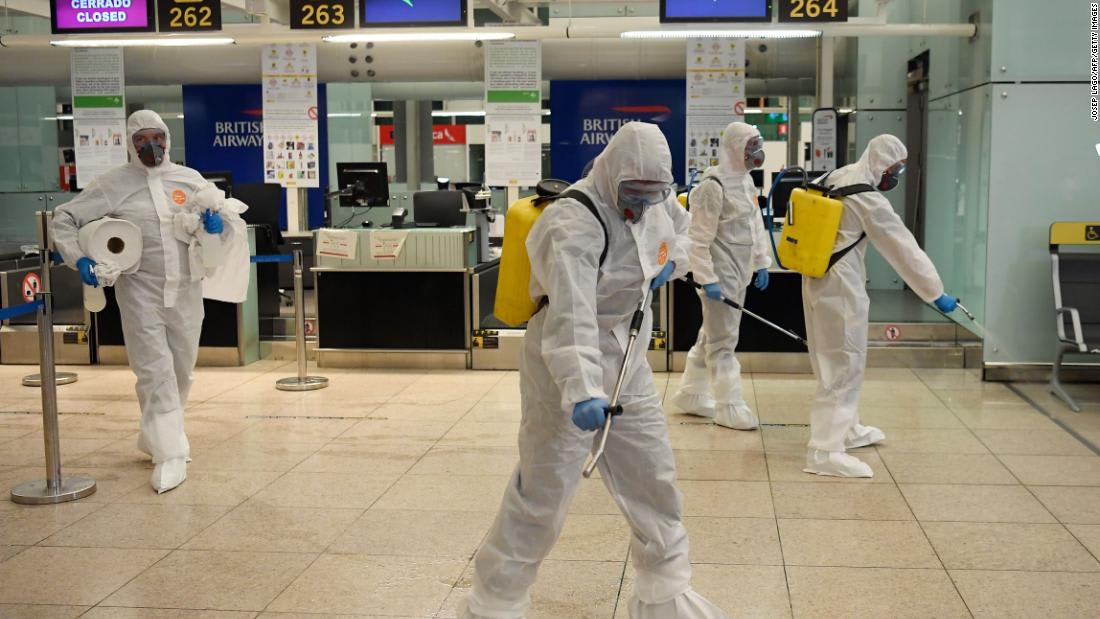 Japanese Prime Minister Shinzo Abe will declare a state of emergency on Tuesday, lasting for approximately one month, he announced Monday.

Abe will hold a press conference on Tuesday to further explain the declaration.

The Prime Minister’s advisory committee recommended that a state of emergency be declared for seven Japanese prefectures, including the Japanese capital of Tokyo and its second largest city Osaka. The full list of prefectures affected is: Tokyo, Kanagawa, Saitama, Chiba, Osaka, Hyogo and Fukuoka.

The stimulus includes JPY ¥6 trillion (USD $54 billion) in cash handouts for families who have lost significant income and small business owners. Also included, JPY ¥26 trillion (USD $238 billion) in extension of deadlines for tax and social welfare payments. Zero-interest loans will also be provided to private financial institutions, but Abe did not specify the amount.

This post has been corrected to better reflect the details of Japan’s stimulus package.

Former British Prime Minister Tony Blair says the economic damage caused by the UK’s social distancing rules and government-mandated shutdown of some businesses is “enormous” and could eventually affect the county’s ability to run its health-care system.

“I am terrified by the economic damage we are doing every week this lockdown continues,” Blair told BBC radio on Monday.
“If it goes on for a long period of time, then that economic damage doesn’t just affect the economy per se, it also affects your ability to operate your health-care system effectively.”

Blair said the only real way to ease the restrictions is to dramatically increase the number of coronavirus tests being carried out.

“If I was handling this situation now I think I would put a senior minister in charge of testing and nothing else,” he said, adding that the minister would need to be supported with business and technology experts to advise on how to increase testing rates to an industrial scale.

“Unless you’re able to get mass testing -- at scale, with speed -- I don’t see how you get a way out of this lockdown.”

If you're just joining us now, here's what has happened since our last catch-up.

Boris Johnson in hospital: The British prime minister was admitted to hospital yesterday for tests, but continues to lead the government, authorities said today. Johnson tested positive for coronavirus on March 27, and is still experiencing symptoms 10 days later, so went to the hospital as a "precautionary step."

Scottish scandal: Scotland’s chief medical officer resigned after being caught leaving her home without a proper excuse. Police issued her with a formal warning on Sunday for breaking Scotland’s strict measures aimed at limiting the spread of coronavirus.

Irish leader steps in: Ireland's Taoiseach (prime minister) Leo Varadkar, a former doctor, has rejoined the medical register and will work one shift a week to help out, according to national broadcaster RTE.

Spike in Japan: Japan's health ministry announced 378 new cases and three more deaths nationwide by the end of Sunday. A US military commander in Japan declared a public health emergency for military bases today, citing the rise in cases in nearby Tokyo.

Controversial drug: India has imposed a blanket export ban on a malaria drug touted by President Donald Trump as possible therapy for coronavirus. This ban comes just as Trump called on Indian Prime Minister Narendra Modi to release more of the drug to the US.

And finally, some good news: The Easter Bunny and Tooth Fairy are both essential workers, so they are exempt from movement restrictions, New Zealand Prime Minister Jacinda Ardern told children today. But they may be busy with their own families during this pandemic -- so if children aren't visited by the Bunny this year, they could organize their own social distancing version of an Easter egg hunt, she suggested.

President Donald Trump called Britain's Queen Elizabeth II "a great and wonderful woman" on Twitter, after the Queen recorded a rare televised address to the nation broadcast on Sunday.

The Queen typically only speaks to the public during her annual Christmas message, or when there is a new parliament installed.

The Queen's message: She urged unity and offered reassurance for the nation during her speech.

"Together we are tackling this disease, and I want to reassure you that if we remain united and resolute, then we will overcome it," the Queen said. " I hope in the years to come everyone will be able to take pride in how they responded to this challenge."

She thanked those who were staying at home and following social distancing rules, as well as frontline workers and medical staff.

Contrast in the US: Trump's praise of the Queen comes as the US struggles with its own outbreak, and as the President faces sharp criticism for his handling of the crisis.

He has sent mixed messages to the public over the past month, offering misleading information on testing, ventilator supply, and the pandemic's timeline.

Trump has also contradicted medical and scientific experts on his own White House task force, and urged the economy to resume operations by Easter -- which is this coming weekend.

"We have to open this country up," he said last week -- even as doctors warn the nation will see a massive spike in cases if Americans return to crowded workplaces or events.

Colombian President Ivan Duque called for solidarity and support for more than a million Venezuelan migrants who have been hit hard by the impacts of coronavirus, during a Facebook Live session on Sunday.

About 600 Venezuelan citizens crossed the Colombian border into Venezuela on Saturday, according to Migracion Colombia, Colombia’s Immigration Authority. They were received by officials from the Administrative Service of Identification, Migration and Immigration of Venezuela.

Colombia’s quarantine measures during the outbreak have left many Venezuelan citizens in the country without a source of income.

Duque said Colombia will help the migrants despite the difficulties caused by the outbreak, "especially those with the most vulnerable conditions, being able to receive food and some protection at this time."

He said the government would continue making progress in food aid and protection programs to help the nearly 1.7 million displaced Venezuelans.

Switzerland reported 822 more cases of coronavirus on Sunday, bringing the national total to 21,100, according to the Swiss Federal Office for Health.

At least 559 people have died from the virus.

The Swiss authority said that there are 246 cases per 100,000 inhabitants.

“Switzerland now has one of the highest incidences (246/100,000) in Europe,” said a statement on the health authority's website.