Life in China is beginning to return to normal now that the coronavirus outbreak has largely been contained across the country, with lockdowns lifting and employees returning to work.

China only reported 20 new cases today -- a drastic drop from just a few weeks ago, when the country was recording thousands of new infections a day.

The new cases are no longer spread out across the country -- now, new cases are mostly either imported from international travelers or concentrated in Hubei Province, the epicenter of the outbreak.

Domestic travel is resuming: During the worst of the outbreak, 1,119 highway entrances and exits across the country were closed. Now, all but two have reopened, according to state media outlet Xinhua.

This is a huge contrast to February. Just a month ago, much of China was essentially locked down. Many residents weren't allowed to leave their apartment complexes, let alone the city. Some stayed indoors for weeks on end.

Even within cities, public transport was restricted; in Wuhan and other locked-down cities, subway trains were halted and most taxis suspended, with only a small number of government-issued shuttles and cars operating.

Illinois Governor JB Pritzker expressed strong dissatisfaction with federal authorities after American travelers returning to the country were forced to wait in long lines for hours to get through customs.

Passengers at Chicago's O'Hare airport told CNN they had been waiting for up to five hours in line, with no hand sanitizers in sight. Photos from the airport show crowds jammed together as they wait, with only a few people wearing face masks.

"To the frustrated people trying to get home, I have spoken with the mayor and our Senators and we are working together to get the federal government to act to solve this," Pritzker continued. "We will do everything within our power to get relief. The federal government needs to get its s@#t together. NOW."

Acting Homeland Security Secretary Chad Wolf acknowledged the problem in a tweet, saying, "DHS is aware of the long lines for passengers who are undergoing increased medical screening requirements. Right now we are working to add additional screening capacity and working with the airlines to expedite the process."

Some context: On Wednesday, Trump suspended travel from 26 European countries to the US, starting Friday.

The announcement sparked chaos at European airports as Americans sought ways to return home before the ban went into effect.

Yesterday, the Trump administration expanded restrictions to include the UK and Ireland. Like the previous restrictions, US citizens and their family members are exempt from the restrictions but are being subjected to enhanced medical screenings upon arrival.

Countries worldwide are now implementing drastic emergency measures to deal with the pandemic -- lockdowns, travel bans, and quarantines. Here are the latest developments:

The virus is spreading across the US. President Trump has tested negative for the virus. The new travel ban, which went into effect on Friday midnight, has been extended to include the UK and Ireland, as well as 26 European countries. The virus has now reached 49 of the country's 50 states; only West Virginia has yet to report any cases.

Dozens of states have declared states of emergency, and individual cities and counties are declaring emergency measures, like a 10 p.m. curfew in Hoboken, New Jersey.

Things don't look much better in Europe. Italy remains under total lockdown, with the second-highest number of cases globally after China. Reports are emerging of hospitals struggling to deal with the volume of patients.

Spain's residents are now restricted from leaving their homes; they can only leave for work, groceries or emergency supply runs, hospitalizations, and caring for other family members. And France is closing all bars, restaurants, cafes, clubs, and cinemas.

Many European countries -- Spain, France, and Germany, in particular -- have seen dramatic spikes in case numbers this week, with hundreds of new infections a day.

The situation is improving in some Asian countries ... China and South Korea reported a dramatic fall in new daily cases all week, suggesting that the outbreak may have passed its peak in these hard-hit countries. Other places in Asia, like Hong Kong, are still reporting a handful of new cases, but the rate of infection has slowed compared to a few weeks ago.

... But not all: In Japan, numbers are spiking, with new cases reaching twice the average daily figure. And the Philippines' capital region of Metro Manila is now under partial lockdown -- meaning restricted movement, screenings at border points, employees working from home, and community quarantines.

When you walk past the Life Care Center, the nursing home at the heart of Washington's coronavirus outbreak, you can hear the voices of people trying to comfort their elderly parents inside.

"Hi, Pops! Why don't you cover his legs up?" Katherine Hempf yells to her father and his nurse.

"Mom, you feeling any better today?" Bridget Parkhill asks as she peers inside her mother's room.

Their voices are strong and clear. They have to be. They are speaking through glass and concrete to people who have suffered strokes, chronic obstructive pulmonary disease and chronic breathing problems and have now tested positive for coronavirus.

The families cannot go inside to comfort their parents. They can only talk through the walls and windows and on cell phones.

Infected residents and staff: There are now 22 coronavirus deaths linked to the facility, and many staff members have reported having symptoms.

The nursing home was slow to test staff and only recently reported that 47 of them had tested positive for coronavirus. More than a third of the staff is staying home.

And there's nowhere else for the residents to go. Hospitals won't take them unless they are dealing with life-threatening symptoms. Other nursing homes won't take them. And the families of the patients can't care for them at home safely. They are stuck and doing the best they can, Life Care spokesman Timothy Killian told CNN. 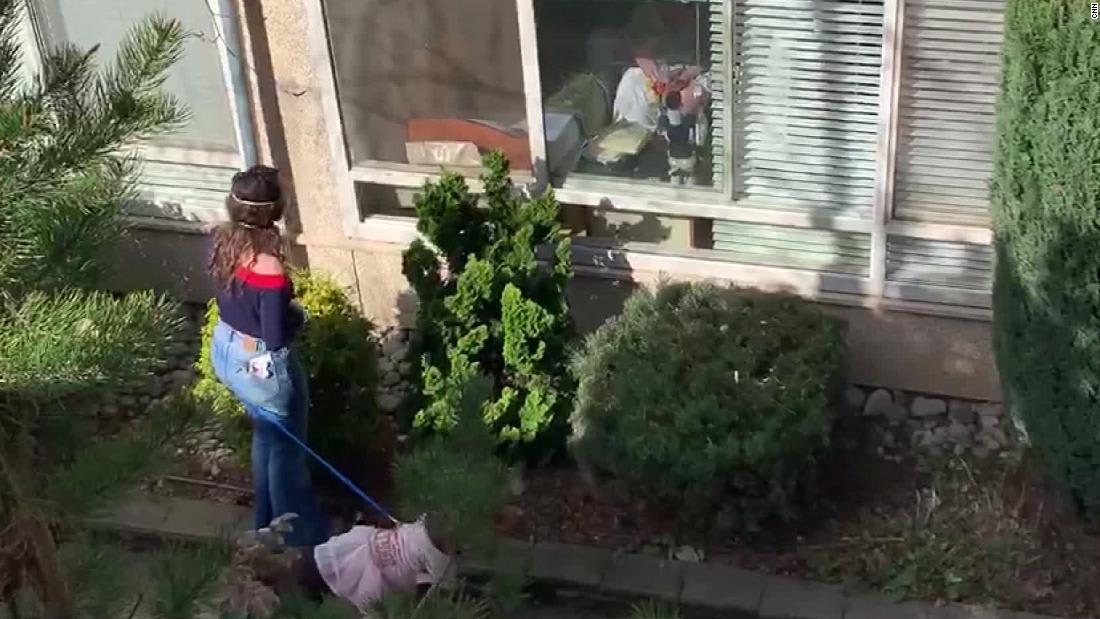 Families resort to yelling to their loved ones inside infected nursing home. 'It's like a kick in the gut,'

As the coronavirus crisis hurts America's retail industry many stores are shutting their doors or reducing their hours.

Walmart, the largest retailer in the nation, is shortening its opening hours in all 4,700 locations, to 6 a.m. until 11 p.m.

Other US grocery stores, including Publix, Giant, Stop & Shop and H-E-B have also modified their hours in recent days.

Late Saturday, Urban Outfitters said it will close all of stores worldwide until at least March 28.

Patagonia, Glossier and Neighborhood Goods have also announced their stores will temporarily close.

All people arriving in Australia after midnight Monday local time will need to self-quarantine for 14 days, Prime Minister Scott Morrison announced today at a news conference.

There is no plan for mass school closures at this point, but the cabinet might discuss this issue further on Friday, Morrison said.

He also announced a ban on all cruise ships docking in Australia.

Earlier this week, the Morrison government advised the cancelation of all gatherings of more than 500 people, leading to the postponement of many sports events, such as the Formula One Australian Grand Prix.

The new quarantine measures echo those announced yesterday in New Zealand; Prime Minister Jacinda Ardern said all arriving travelers, including New Zealand citizens and residents, would face a 14-day mandatory quarantine. The only exemption is for those from the Pacific Islands.

Xiong Qingzhen, a drone engineer in the central Chinese metropolis of Wuhan, spent more than two weeks in a makeshift hospital in February receiving treatment for the coronavirus.

Twice a day, the 38-year-old was handed a bag of brown soup -- a traditional Chinese remedy blended from over 20 herbs, including ephedra, cinnamon twigs and licorice root.

But unlike most patients, Xiong was skeptical of its efficacy and refused to drink it.

"In my opinion, it is a sheer placebo," said, Xiong, who was discharged in late February from the makeshift hospital run by TCM doctors where no Western medicine was provided, apart from medication for underlying conditions, such as high blood pressure.

The "lung-clearing and detoxing soup," as the herbal compound he was given is called, was part of the Chinese government's push to use Traditional Chinese Medicine (TCM) in the fight against the novel coronavirus outbreak.

As of late last month, more than 85% of all coronavirus patients in China -- about 60,000 people -- had received herbal remedies alongside antiviral drugs, according to the Ministry of Science and Technology.

But even in China, where TCM has a large number of adherents, the government has been unable to quell its skeptics -- like Xiong. Abroad, the herbal remedies could face skepticism from Western experts, who have questioned their safety and effectiveness. 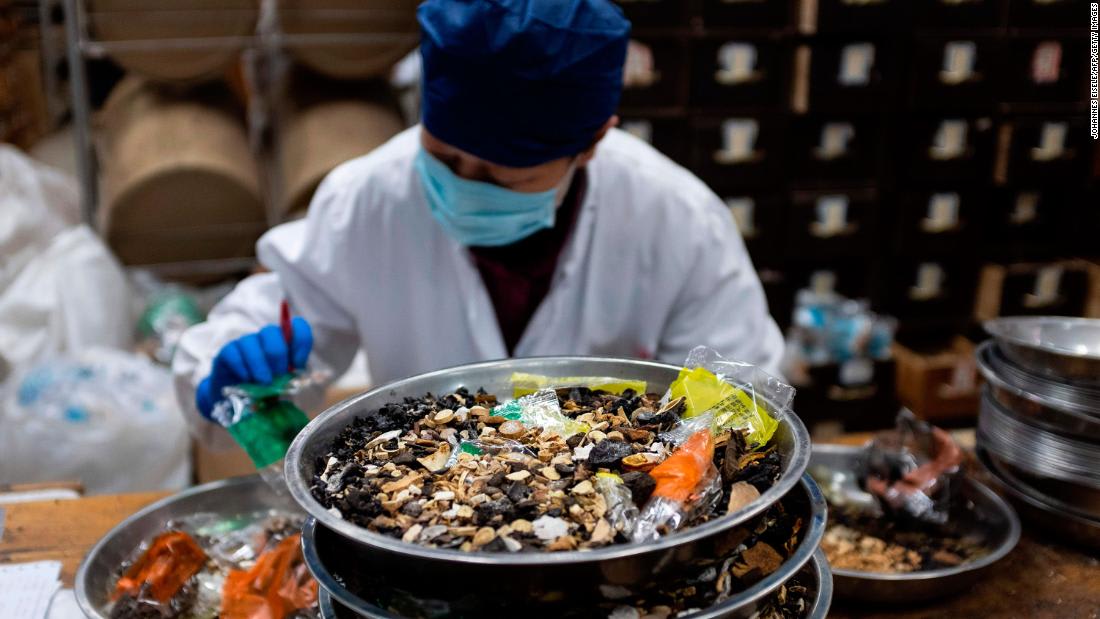 Beijing wants to promote traditional medicine to treat coronavirus, but not everyone is on board

After confusion and contradicting claims yesterday, Google now says it is working with the federal government to develop a nationwide website containing information about coronavirus symptoms and testing.

The company did not give a time frame of when the website would be up.

This comes after a previous denial: On Friday, after President Trump claimed Google was developing this website, the company said it would not be publishing a national-scale website for coronavirus testing anytime soon.

Instead, a health-focused subsidiary owned by Google’s parent company, Alphabet, said it intended to launch a small-scale website next week to begin to triage California-based patients. The website would aim to serve a broader population only “over time” — not “very quickly.”

In a different tweet Saturday night, the company did also mention the pilot website in the San Francisco area.

This brings the national total to 8,162 confirmed cases and 75 deaths, according to the South Korean Centers for Disease Control and Prevention

Seven new cases are linked to a cluster at a call center in Seoul, and 41 new cases are from the southern city of Daegu, where the outbreak has been concentrated.

Of the total national cases, 74% are from Daegu.

A slowdown in infections: The country's case numbers spiked in February, with more than half of all cases linked to the Shincheonji religious group in Daegu.

After weeks of aggressive, fast, and widespread testing, a public health campaign, creative technologies including GPS quarantine monitoring, and other strict measures, case numbers began falling this week -- sparking cautious hope from health officials that the worst of the outbreak may have passed.