“Over the last 24 hours I have developed mild symptoms and tested positive for coronavirus. I am now self-isolating, but I will continue to lead the government’s response via video-conference as we fight this virus. Together we will beat this,” Johnson said on Twitter.

“The test was carried out in No 10 by NHS staff and the result of the test was positive. In keeping with the guidance, the Prime Minister is self-isolating in Downing Street," the spokesperson added.

At least 4,858 people have died from coronavirus in Spain, with 64,059 cases recorded, according to Spanish Health Ministry data released Friday.

The country's rise in deaths -- up 769 -- was a new record in Spain, though the rate of increase was slower than in the past two days.

On Thursday, Spain’s Health Minister Salvador Illa had said analysis of recent data from Spain indicated a “phase of stabilization” in the trend of diagnoses.

A Chinese government regulatory group said on Friday it has launched an investigation into Covid-19 test kit maker which supplied test kits to Spain that were recalled.

On Thursday, the Spanish government said it was recalling 9,000 kits after finding the results to be “unreliable.”

The tests, made by the Chinese company "Shenzhen Bioeasy Biotechnology" were bought "some weeks ago" through a Spanish supplier that imported them from China, the Spanish government said in a statement sent to CNN. When the equipment was tested by Spanish authorities before being put into use, they didn't meet quality levels.

Obviously there was an obligation to return the batches and the supplier is going to change them,” Spanish health ministry official Fernando Simón said at the government’s daily coronavirus briefing. “Also, the health ministry is exploring other providers to provide rapid tests", he said.

The Shenzhen Market Supervisions Administration said on its Weibo account Friday it has launched an investigation into Bioeasy.

Bioeasy posted a statement on its WeChat account Friday to say that the nasopharyngeal swab samples might have been sampled, extracted and handled without strictly following the company's instructions, reducing the accuracy of the tests. Bioeasy added that it didn’t communicate instructions well with customers.

The UK did not take part in the EU’s scheme to acquire extra ventilators during the coronavirus pandemic because of an “issue in terms of communication,” according to UK Business Minister Alok Sharma.

The tendering process on those schemes had already started… If there are future schemes we will absolutely look to see if we will be joining them.”

He said the UK has its own “ventilator challenge,” which has seen around 3,000 companies respond with offers to help.

On Wednesday, James Dyson, the founder of British technology company Dyson, confirmed to employees in a letter shared with CNN that it had received an order from the UK government for 10,000 new ventilators to support efforts by the NHS to treat the growing number of patients who have contracted coronavirus.

Asked about Dyson-produced ventilators being in use by next month, Sharma said Dyson or any other company will need to meet the regulatory requirements before newly acquired ventilators are put into use in the National Health Service (NHS).

Pressed on the timescale, Sharma said: “What we want to see is prototypes coming forward in a matter of weeks before we move into large scale production.”

He said although the government is trying to move at pace, “the critical point is to make sure that any machines that come forward actually meet the requirements and are safe”.

One of the most famous streets in the world has had an unexpected makeover thanks to the coronavirus lockdown in the UK.

London's iconic Abbey Road, which is normally a tourist magnet thanks to its appearance on the Beatles album cover of the same name, is now empty as locals hunker down inside.

That has provided a rare opportunity for municipal employees in the UK capital to give the famous crossing a new coat of paint. 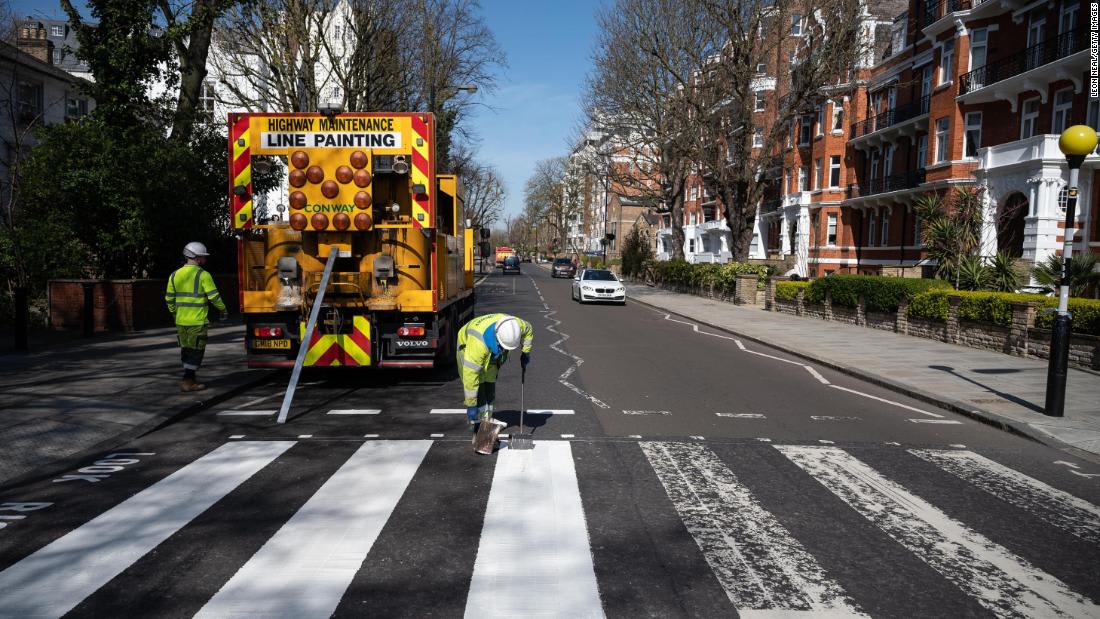 Health officials in Hong Kong have confirmed 65 new novel coronavirus cases, in the largest single-day increase since the outbreak began.

Links to Europe: In a press conference held on Friday, Dr Chuang Shuk-Kwan of the Center for Health Protection said 41 of the 65 new cases had recent travel history to places in Europe including the United Kingdom and Portugal. She added 14 of the new cases were students returning to Hong Kong.

The 65 new cases brings the city-wide total to 518. Some 338 cases are still currently being treated in hospitals, including four cases in critical condition.

The United States now has more coronavirus cases reported than any other country in the world.

According to CNN Health’s tally of cases that are detected and tested in the United States through public health systems, there are at least 82,250 cases of the novel coronavirus. 1,196 people have died.

Police in the southern Italian city of Reggio Calabria have seized 900 unauthorized coronavirus test kits for failing to have validation and certification.

The kits were seized as part of checks to identify cases of commercial fraud or fraudulent rises in the prices of medical services during the pandemic, financial police said.

Checks found that some people had already made bank transfers to buy the uncertified products online -- however, the police seized the kits before they were delivered.

The sale to unsuspecting and vulnerable citizens of devices for which efficacy has not been proven in any way, seriously endangers public health and safety given that any negative response of the test could hypothetically contribute to the spread of the virus,” a statement from the financial police said.