The Indian government has announced a relief package worth $22.6 billion to assist those most affected by the coronavirus pandemic and the nationwide lockdown.

“It’s only been 36 hours since the lockdown was imposed,” the country’s Finance Minister Nirmala Sitharaman said at a news conference on Thursday. "Now we have come up with a package which will immediately take care of the welfare concerns of the poor and suffering workers and those who need immediate help."

The relief package includes medical insurance cover of $66,400 per person to those working on the frontlines, such as medical workers, sanitation workers and community health workers. This measure will cover around 2 million people.

The government will provide 800 million people -- nearly two-thirds of the country’s population -- with 5 kilograms of rice or wheat each month for the next three months for free. “We do not want anyone to go hungry,” Sitharaman said.

Other measures announced include fast-tracking subsidies and benefits for farmers, construction workers, widows and the disabled as well as increasing the minimum wage.

The 87 million farmers who currently receive $80 a year will be given the first instalment for the next financial year immediately, in the first week of April.

Workers under the Mahatma Gandhi National Rural Employment Guarantee Act (MGNREGA) -- which guarantees 100 days of unskilled manual work per year -- will have their wages increased by $26.

Senior citizens, widows and the disabled will get a one-time $13 payment over the next three months in two instalments, benefiting 30 million people.

The 200 million female Jan Dhan (government’s direct benefits transfer scheme) account-holders will get a one-time amount of $6.60 each per month for the next three months.

Women on the Ujjwala (government gas subsidy scheme) will be given free cylinders for three months. This will benefit 83 million families living below the poverty line.

More than half a million people in the UK have signed up as volunteers to support the country’s National Health Service (NHS), the UK’s Health Secretary Matt Hancock says.

Hancock tweeted on Thursday: “Fantastic that 560,000 people have now responded to our call to volunteer to support our NHS to defeat #Coronavirus."

Volunteers will be asked to carry out various tasks, including collecting shopping, medicines or other essential supplies to deliver to people who are self-isolating.

They might also be asked to provide transport for patients who are being discharged from hospital, transporting medical supplies, or chatting with people who are self-isolating and at risk of loneliness.

Jordan on Wednesday eased one of the world's strictest lockdowns over the coronavirus after it prompted chaotic scenes in the country.

Days after a total curfew went into effect, people clamored to receive bread distributions from government trucks, the emergency hotline went offline after it apparently became overloaded with phone calls, and some reported they had nothing at home to eat.

But on Tuesday, the government backtracked, loosening restrictions on movement. After four days of total lockdown, people were allowed to leave their homes on foot for essential trips, such as purchasing food from small convenient stores and obtaining medicine. A curfew is still in place from 6 p.m. to 10 a.m.

With the cascading glissandos of the harp and the rich sounds of the cello, classical music is known to relieve stress or even lull you to sleep. And amid the coronavirus pandemic, when anxiety has reached an all-time high, a good night's sleep is much needed.

The Arkansas Symphony Orchestra's "Bedtime with Bach" series can help with that.

Every night at 9 p.m., members of the orchestra post videos of themselves performing on Facebook, all from the comfort of their homes in Little Rock, Arkansas.

The short performances are a way for the orchestra members to stay connected with the community while their concerts are canceled, members said.

"Music is alive, but it becomes more alive when you've got the audience's energy coming back at you," said Drew Irvin, ASO's co-concertmaster, who came up with the idea. "So for now, we're going to make that through Facebook." 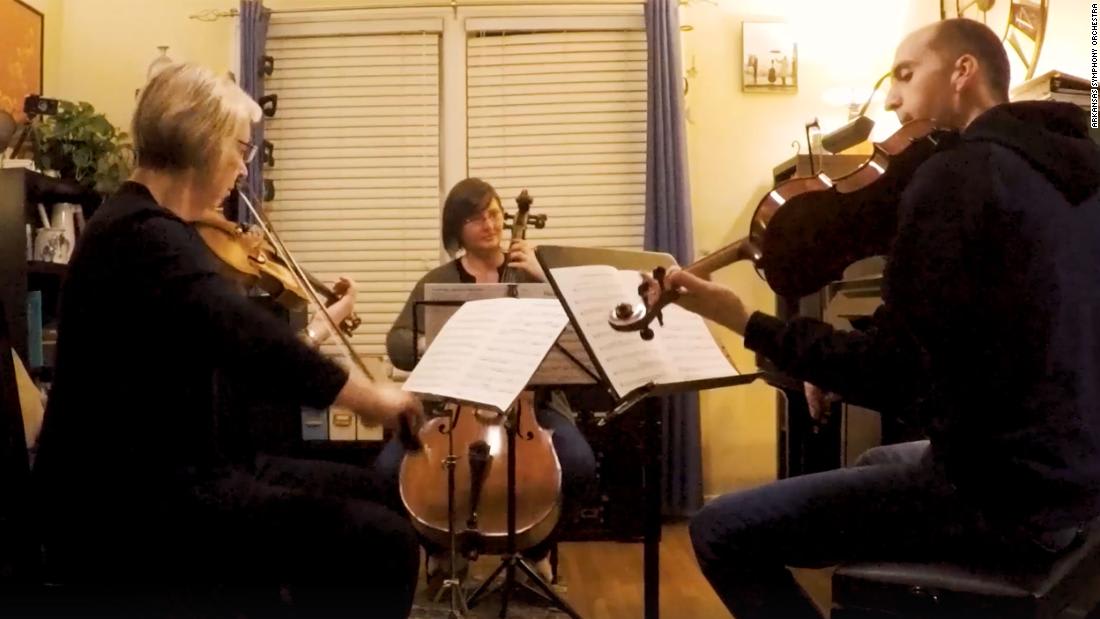 Phrases like social distancing and self-isolation have made their way into the public consciousness. In some places, like Thailand's capital Bangkok, people diligently follow the rules of social distancing -- even sitting feet apart from each other in neat grids in mall food courts.

In other places like Japan, where the popular cherry blossom season is underway, social distancing doesn't appear to have taken hold yet.

There were similar scenes in the United States, where more than a dozen states have imposed stay-at-home orders. Last weekend, crowds gathered on beaches, hiking trails, and parks in California, in open defiance of the state-wide order to shelter in place and avoid close contact with others.

Meanwhile, in places like mainland China, coronavirus case numbers continue to drop every day -- leading to a cautious easing of travel restrictions and strict lockdowns.

Businesses in China are returning to work, and even tourist sites are reopening -- the Badaling section of the Great Wall is finally open again this week, after being closed for two months.

See all the pictures here

Thousands of people are practicing social distancing worldwide -- but that's not stopping neighbors from leaving messages of hope in the windows of their homes.

It's unclear where or when the effort started, but photos of people putting rainbows, colorful heart cutouts, teddy bears and anything that resembles a sign of hope have been spreading all over social media.

Some are participating because they want their neighbors who have been deemed "essential workers" to see some joy on their way out of their homes. Others say they decorated their windows so families taking walks and getting fresh air have a nice reminder that everyone is in this together.

In Norfolk, Virginia, Kyle Siebels told CNN he found out about the effort through his neighborhood Facebook page. When the Siebels family went for a walk Tuesday, Kyle said he saw 30 houses participating. On Monday, Kyle's wife, Tory, cut out the hearts and went to town on their front door.

"Our neighbors have started putting colored hearts in their windows for neighborhood kids to find on their walks while everyone is staying home," he wrote on Facebook. "We laced up our door so they wouldn't miss our circle. Pretty cool to see how many houses have participated. Nora (Kyle and Tory's daughter) definitely loves our walks." 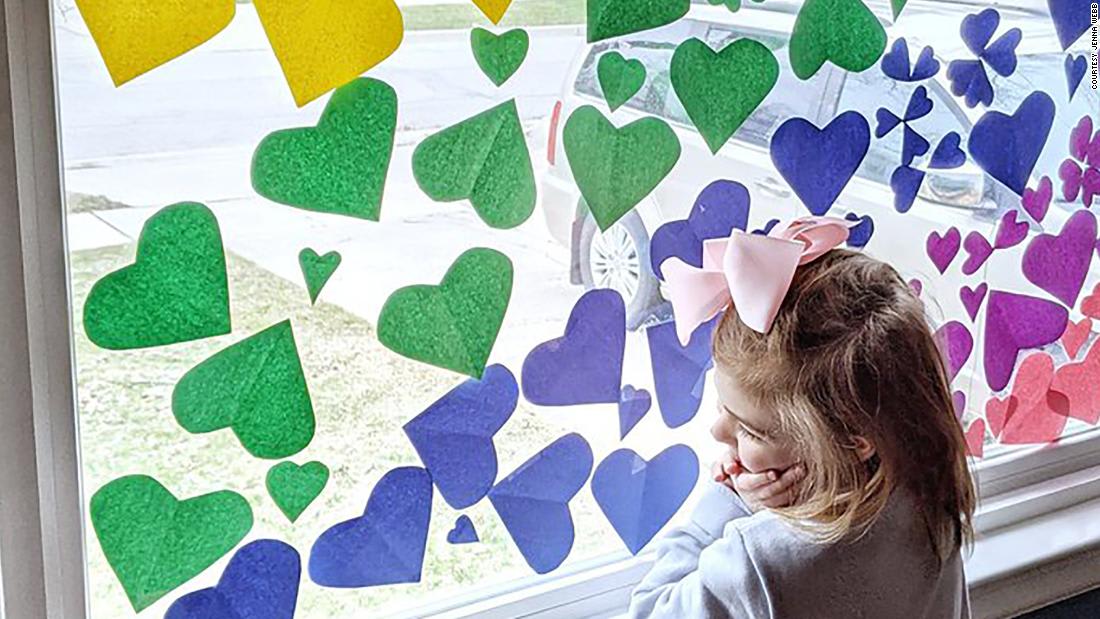 Even $2 trillion is not enough to dispel fears stalking Washington that the coronavirus crisis could pull down the economic foundation on which American life depends.

There are several daunting takeaways from the bulging pandemic stimulus bill -- expected to clear Congress soon after the Senate passed it unanimously late Wednesday night, notwithstanding some last-minute quibbles by rank and file members on both sides. All of them underscore the extreme and historic nature of the crisis that may have already wiped out millions of jobs at a swipe.

The human tragedy of the pandemic is being played out in growing lists of lost family members and the courage of medical professionals saving lives behind closed hospital doors.

But the rescue bill's staggering size is the most public expression of the historic scale of the coronavirus disaster and the fragility of the systems that sustain American life. After all, in a matter of days, an economy powering ahead at historic rates suddenly needed a bill to plug a hole equal to 10% of US gross domestic product after the crisis swept away the complacency of a decade of economic expansion and perpetually rising stock markets.

The breakneck speed at which the bill came together in a capital fractured by vicious divides is an example of rare compromise in the bitter aftermath of impeachment. But it also reflects the motivating power inherent in the threat of economic implosion.

Thirdly, and perhaps most concerning, are signs that the biggest economic rescue measure in history won't be nearly sufficient to nurse the economy through the dark months to come.

Leaders on all sides are clear that the package is a stopgap to get through the next few months -- and will not revive the economy without another huge cash injection.

Woody Johnson, the US ambassador to the UK, has accused China of engaging in “blatant and dangerous propaganda” about the coronavirus, saying the world might have been spared the full impact had Chinese officials not suppressed facts early on.

In an opinion piece published in Britain’s The Times newspaper, Johnson says China failed in its obligation to the international community to share information about the outbreak transparently.

“First (China) tried to suppress the news. Then, it worked to protect its own population while selectively sharing critical information, such as genetic sequence data, and continuing to stonewall international health authorities that were offering assistance, requesting access and seeking more information,” Johnson wrote.
“Had China done the right things at the right time, more of its own population, and the rest of the world, might have been spared the most serious impact of this disease.

He added that when the crisis abates, there will need to be an evaluation of the costs of the “breakdown in international collaboration” and China’s actions early on.

Some context: China has faced criticism both internationally and domestically for its handling of the outbreak in the first few weeks, when local officials in Wuhan detained and targeted doctors who tried to speak out about the emergence of a new virus.

One of those doctors, Li Wenliang, later died of the virus, sparking fury and calls for freedom of speech on Chinese social media.

Earlier this month, the Chinese government included Li in a list of of 506 healthcare and response workers who acted as "advanced individuals in the prevention and control of novel coronavirus pneumonia epidemic in national health system."

WHO response: The World Health Organization has acknowledged “mistakes” made by China, but its officials have largely been positive about how the country has responded to the crisis.

As the aviation industry continues to be slammed by the coronavirus pandemic, one budget carrier has gone for a very different and rather divisive approach.

Vietnamese airline Vietjet has launched an insurance policy named "SKY COVID CARE" that allows passengers to claim up to 200 million Vietnamese dong ($8,550) if they are infected with the virus while traveling on one of its flights.

The aim of the policy, which is free of charge and covers all domestic flights between March 23 and June 30, is to help "bring passengers assurance," according to the airline.

In an official statement, Vietjet says it's prepared to pay out "tens of billion dong" to ensure that its customers feel at ease while traveling during the ongoing crisis.

"The health safety of passengers and cabin crews are protected at the highest level against all risks of disease," reads the statement on Vietjet's official website.
"With the insurance, passengers are eligible for insurance coverage and benefits from Vietjet within 30 days starting at 00:01 of the flight date, regardless of how passengers are infected with the disease."

How the policy works: To make a claim, passengers must provide proof that they've tested positive for coronavirus (subject to a test approved by Vietnam's Ministry of Health) and evidence they were treated "at a hospital or at authorized medical camps located in the territory of Vietnam."

Anyone who has already tested positive, or who has violated government travel regulations or quarantines, will be ineligible.

Those with "epilepsy or mental illness" are also ineligible, along with anyone who submits incorrect personal information. 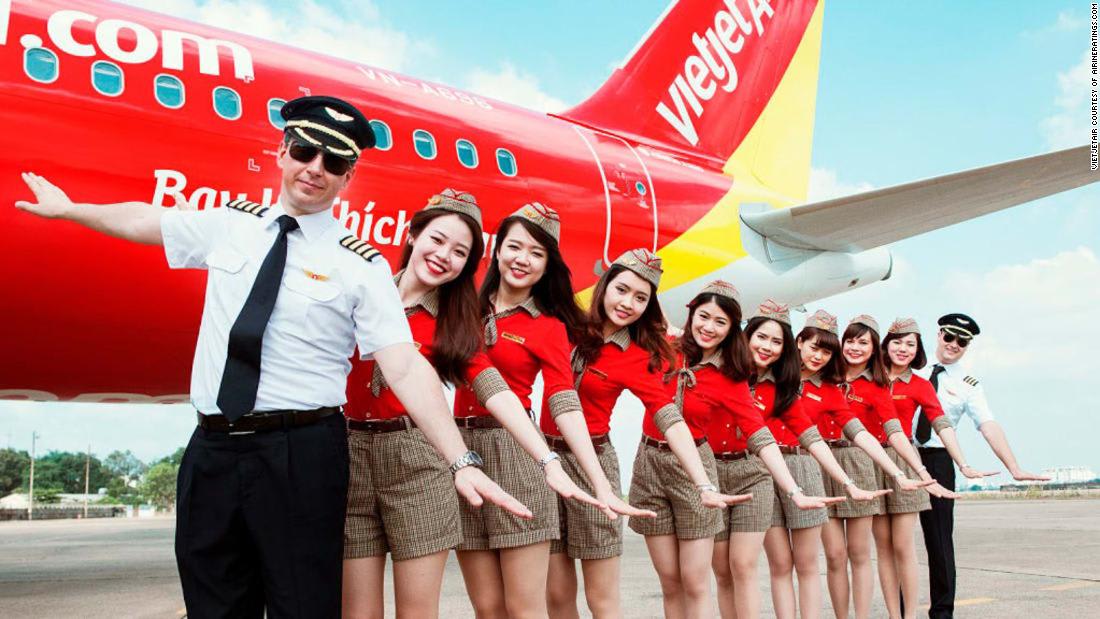