Airlines and airports are set to receive the financial support they requested in the aid package drafted by lawmakers and the administration, according to a CNN review of the document.

The package includes $32 billion in grants for wages and benefits to aviation employees. The administration must pay its first installment to employers within 10 days of the bill becoming law. The assistance includes $25 billion for passenger airlines, $4 billion for cargo airlines, and $3 billion for industry contractors, such as those who handle catering, baggage, ticketing, and aircraft cleaning.

The bill also provides $25 billion for passenger airlines and $4 billion for cargo airlines in the form of loans or loan guarantees.

In exchange for the assistance, companies that receive the assistance are barred from making furloughs, pay cuts, or stock buybacks, and from issuing dividends to investors, through September. It also institutes limits on executive compensation.

Airlines may also be required to operate routes they would otherwise like to cancel because of low ridership or profitability. Under the bill, the Transportation Department can require air carriers continue service on routes, particularly for the “needs of small and remote communities and the need to maintain well-functioning health care and pharmaceutical supply chains, including for medical devices and supplies.”

It would also provide a tax holiday, allowing airlines to keep more of the ticket price customers pay.

Cash-strapped airports could also receive government assistance of up to $10 billion, including at least $100 million for general aviation airports, which serve smaller planes rather than scheduled airline service.

The bill requires a report to Congress on some of the payments by November.

He said that the state has 4,000 ventilators in the existing hospital system and the federal government has sent 4,000. The state has purchased 7,000 others and is “still shopping," he added.

“Our single greatest challenge are the ventilators," Cuomo said.

He said that based on the way the bill is written New York's government would only get $3.8 billion. He added that "sounds like a lot of money" — but it's not considering he estimates the state is looking at a revenue shortfall of $9 to 15 billion and response has already cost New York $1 billion.

Cuomo added that in the Senate bill, New York City gets $1.3 billion, which he called a "drop in the bucket."

He continued by saying that he has spoken to New York's House delegation. "I said to them, 'this doesn't do it,'" adding, "We need the House to make adjustments."

"I'm telling you these numbers don't work," he said.

There are at least 30,811 confirmed cases of coronavirus across the state of New York, Gov. Cuomo said at a news conference today.

Cuomo said that 12% of those individuals who have tested positive are hospitalized, and 3% of positive cases are in ICU.

At least 285 people across the state who had tested positive for coronavirus have died, Cuomo added.

He added that 28% of all coronavirus testing across the country has been done by New York state — more than any other state.

CORRECTION: This post has been updated with the number of coronavirus cases in New York City.

New York Gov. Andrew Cuomo said he spoke to Trump and White House task force about a "rolling deployment" of resources around the country that starts with New York.

"New York has the greatest need in terms of numbers" of cases as well as the "most critical in terms of timing," Cuomo said.

He added that New York's 'trajectory is first by a long shot."

He said he told the White House, "let's talk about addressing the critical need in that hot spot" then "once you address that hot spot...then shift to the next hot spot."

He said that he when the time comes to "redeploy that equipment and personnel to the next hotspot" he will "personally guarantee it, and personally manage it" even traveling to the next place in the country that need the resources.

New York Gov. Andrew Cuomo said hospital beds remain one of the state's most critical needs: They need 140,000 to support coronavirus patients, but they only have 53,000.

He outlined some possible measures to increase bead capacity, including:

Here's the state's estimates of how each measure could increase the number of hospital beds: 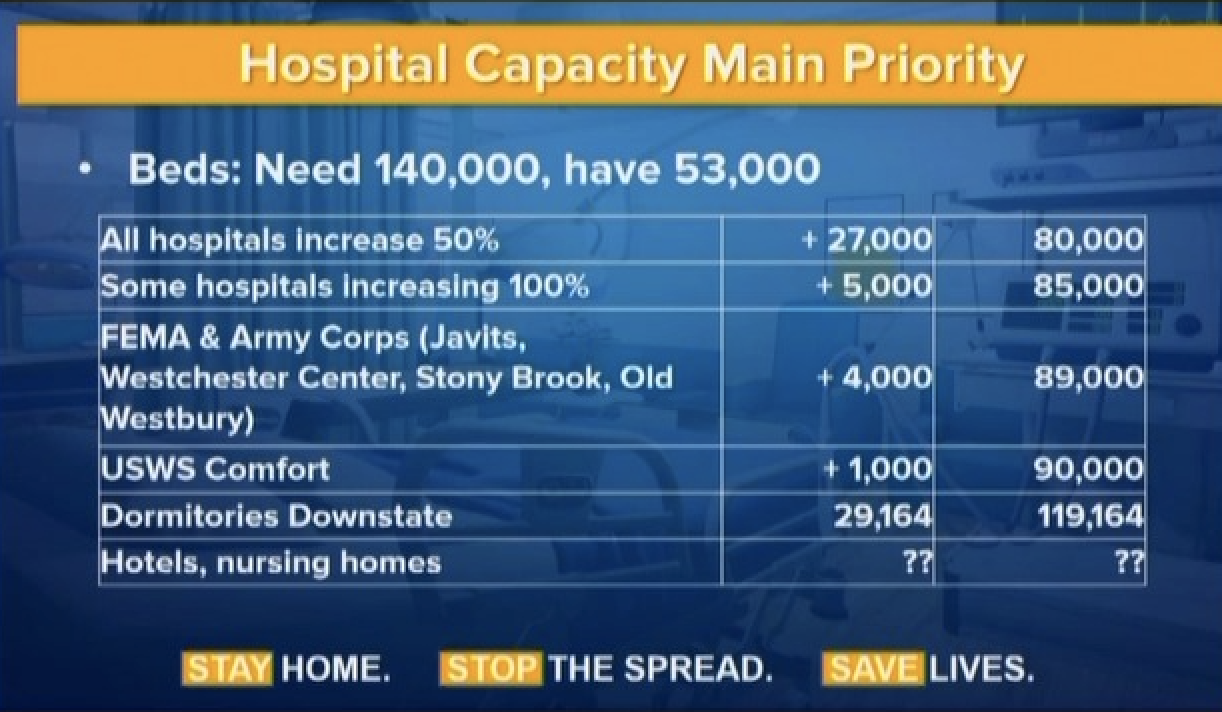 New York Gov. Andrew Cuomo said at a press conference that “evidence suggest density control measures may be working” during the coronavirus outbreak.

He cited the number of hospitalizations in the state due to the virus:

The airport says the suspension is expected to last until the end of April.

In a statement, the airport says it made the decision following the UK Government’s latest instructions in response to the Coronavirus outbreak.

All of its staff will continue to be employed by the airport during the closure.

Sheriff’s deputies in Los Angeles county are not forcing gun stores to close and “efforts to close non-essential businesses have been suspended,” according to a tweet from LASD Sheriff Alex Villanueva.

The department is requesting voluntary compliance with the public.

Last week, he said buying guns in this climate is a bad idea and encouraged current gun owners to lock up their weapons properly.