The bodies of Covid-19 victims are being delivered to an ice rink that is being used as a temporary morgue in Madrid.

The regional government announced on Monday that the Ice Palace (Palacio de Hielo) in Madrid’s Hortaleza neighborhood was being prepared to act as a morgue. Spain’s Emergency Military Unit (UME) has started delivering some bodies already, authorities said.

This is a “temporary and extraordinary measure,” the regional government said, in order to “lessen the pain of the families of the victims and the situation that’s being recorded in Madrid’s hospitals.”

On Monday, the Madrid city government’s funeral service announced they would stop collecting the bodies of those who die from coronavirus as they are “without sufficient protective material,” according to a statement sent to CNN.

They said other services would continue as normal, and the funeral service would still hold cremations and burials for coronavirus victims who are “sent by other funeral services businesses in a closed coffin.”

Spain -- one of the worst-hit countries in Europe -- has now recorded 35,212 cases and 2,316 deaths, according to figures from Johns Hopkins University.

On Sunday, Prime Minister Pedro Sanchez announced that he would extend Spain's state of emergency for another 15 days as the number of Covid-19 deaths soared.

India is the world's second most populous country and its fifth biggest economy, with trade connections all over the globe.

Despite that, the country of 1.34 billion has appeared to so far avoid the full hit of the coronavirus pandemic. It has only 492 confirmed cases of the virus and nine deaths.

But fears are growing that the country remains susceptible to a wider, potentially more damaging outbreak. Experts have cautioned that India is not testing enough people to know the true extent of the problem -- and warn that the country faces several issues that could accelerate the spread of the virus.

Testing capacity: India has a test capacity of 60,000 to 70,000 per week, according to Balram Bhargava, director-general of the Indian Council of Medical Research. By comparison, the United Kingdom -- a country with 5% of the population size of India -- says it is hoping to increase its test capacity to 25,000 a day.

Why an outbreak could be hard to control: In parts of India, even basic isolation measures would be extremely difficult.

Slums: In 2011, an Indian government report estimated that 29.4% of the country's urban population live in low quality, semi-permanent structures, known as slums. Many of the homes here don't have bathrooms or running water. Some slum residents get their water from a communal tap, while others collect theirs in canisters and buckets from tankers that visit a few times a week.

This all makes it difficult to wash hands regularly. "Where on earth are they going to find the water and soap that they need?" asks Bellur Prabhakar, a professor of microbiology and immunology at the University of Illinois. "I think it's going to be nearly impossible to implement that plan."

Social distancing: In India, there are 455 people per square kilometer (or 1,178 people per square mile), according to World Bank statistics -- significantly more than the world average of 60 people, and much higher than China's 148.

Millions of jobs at risk: India's cleaners, household workers, and construction workers could be hurt by lockdowns. According to official statistics from 2011-2012 -- the most recent data available -- there were around 400 million people in India's labor market. Of those, more than half were self employed, and 121 million were casual workers. 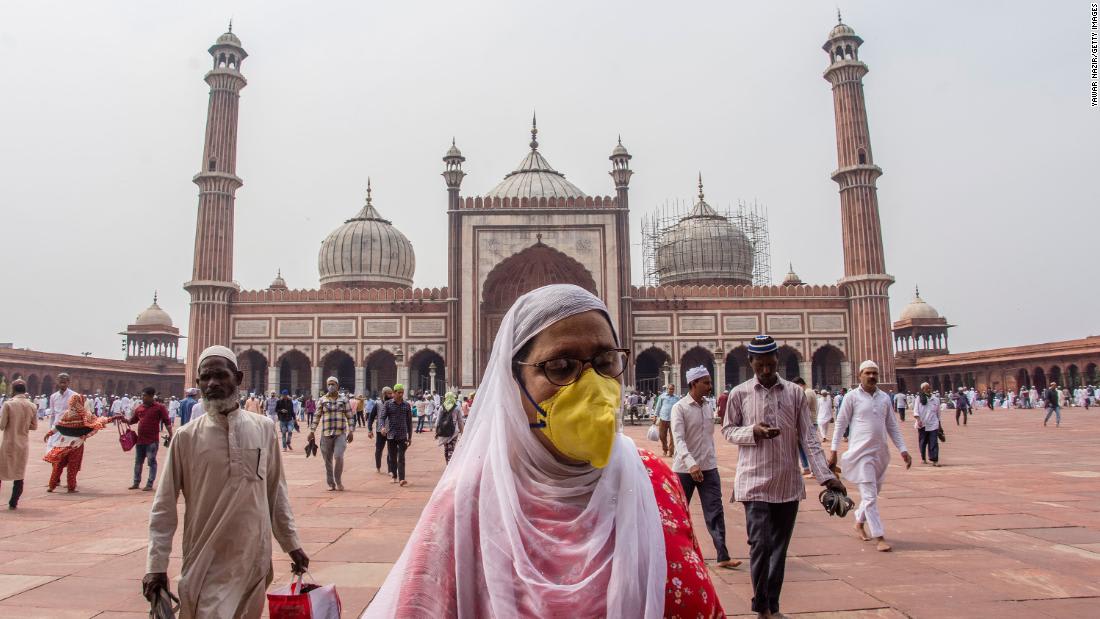 India faces up to potential coronavirus crisis, but is the country really prepared?

Laos confirmed its first two cases of the novel coronavirus on Tuesday, according to the state-run Lao News Agency.

Laos Deputy Minister of Health Phouthone Meuangpak said at a news conference that the two cases were a tour guide who worked with visitors from Europe earlier this month and an employee at the Crowne Plaza Hotel in Vientiane, the Southeast Asian nation's capital.

Laos and Myanmar -- which announced its first cases earlier in the day -- were the only countries in Southeast Asia that had not reported a case of coronavirus before today.

A coronavirus patient in Hawaii has died, authorities said. It is the first fatality in the state related to the viral pandemic.

The individual, who died on Friday, was an adult from the island of Oahu who was suffering from "multiple underlying health conditions."

The Hawaii Department of Health said the person was likely infected via "indirect travel-related exposure."

"All of Hawai‘i expresses condolences to the family of the person who died and shares in grieving their loss. Everyone is encouraged to take care of themselves and their loved ones during these difficult times," the department said.

To date, 542 coronavirus patients have died in the US.

The US Centers for Medicare and Medicaid Services (CMS) and state regulators said that the Life Care Center nursing home in Kirkland, Washington -- the epicenter of the state's novel coronavirus outbreak -- found that patients at the facility were in "imminent danger" during the beginning of the outbreak.

CMS said in a statement that inspectors uncovered three so-called “Immediate Jeopardy” situations -- when a patient’s safety is placed in imminent danger -- after conducting inspections on March 16.

"Specifically, the facility’s failure to rapidly identify and manage ill residents, notify the Washington Department of Health about the increasing rate of respiratory infection among residents, and failure to possess a sufficient backup plan following the absence of the facility’s primary clinician, who fell ill," the statement read.

“We have worked closely with our federal partners over the last several weeks to determine what lead to the outbreak there and what contributed to its spread throughout the facility. We have learned valuable lessons. We are applying these lessons daily in our efforts to prepare long term care facilities throughout the state for the potential of COVID-19. Our regulatory teams are highly focused on visiting all nursing homes in Washington state to ensure those who care for some of our most vulnerable citizens are practicing proper infection control.”

The agency said that according to data from the US Centers for Disease Control and Prevention, 147 nursing homes across 27 states had reported at least one resident who had contracted the virus.

The Pakistani Army has deployed "all available troops and medical resources" across the country to aid the government's efforts to contain the outbreak of the novel coronavirus, said spokesman Maj. Gen. Babar Iftikhar.

"The task at hand is enormous and very difficult," Iftikhar said. He called the threat of the coronavirus one that "we haven't seen in our lifetime."

Iftikhar said authorities will shutter all public transport in an attempt to stop the spread of the virus. He also said that gas stations will also only be open on certain days of the week.

Pakistan currently has 892 confirmed coronavirus patients, six of whom have died.

The global toll: There are 382,108 cases of novel coronavirus and 16,574 deaths globally, according to the Johns Hopkins University, which is tracking figures from the World Health Organization and additional sources.

Hubei ending restrictions: The central Chinese province at ground zero for the novel coronavirus pandemic plans to lift nearly all lockdown restrictions on Wednesday. Measures will remain in place in the provincial capital, Wuhan, until April 8.

More curfews and restrictions: India has expanded its mammoth lockdown to districts across 30 states and union territories, impacting about two-thirds of the population. Several Australian states are enacting border checkpoints on Tuesday and Wednesday. Albania has entered a strict 16-hour daily curfew. Countries across mainland Europe remain under lockdown, and the UK has banned people from leaving home except for "very limited" reasons.

43% of US population told to stay at home: At least 16 states have issued stay-at-home orders, which, once in effect, will impact 142 million people, or 43% of the US population, according to data compiled by CNN using US Census population estimates. There are over 42,600 cases, including at least 540 deaths.

IMF loans: A dozen countries in the Middle East and Central Asia have reached out to the International Monetary Fund requesting financial support due to the coronavirus outbreak.

Calls to postpone Olympics: New Zealand athletes became the latest to voice their support for postponing the 2020 Olympic Games, and are backed by the country’s Olympic committee. Japanese Prime Minister Shinzo Abe is set to hold a call with International Olympic Committee President Thomas Bach this evening.

The situation in Asia: Thailand reported three more deaths and 106 new cases today, taking the national tally to 827 confirmed cases. Thai officials are discussing imposing emergency measures. Singapore reported its biggest one-day surge in cases since the outbreak began. Tokyo's governor warned that Japan's capital could be placed under lockdown if the number of coronavirus cases spike. Myanmar reported its first two cases. Beijing will quarantine and test all international arrivals, regardless of destination and Macao will ban most non-residents from entering.

Henrik Lerfeldt has fond memories of Kitzloch, a popular restaurant and bar in the Austrian ski resort town of Ischgl, where he partied several nights while on vacation three weeks ago.

The 56-year-old Dane, who spoke to CNN from self-quarantine at his home 50 miles from Copenhagen last week, said that his time in Kitzloch in the Austrian province of Tyrol was the way "after-ski" is supposed to be. "Lots of people, lots of drinks, and nice waiters happy to serve you more."

Hundreds of cases: Four days after his return home, Lerfeldt tested positive for the coronavirus, as did one of his friends he was traveling with. But they are just two among hundreds of people from all over Europe whose infections are traced back to Ischgl, some of them directly to Kitzloch, according to European authorities.

Partying continued: Despite an official warning from the Icelandic government on March 4 that a group of its nationals had contracted coronavirus in Ischgl, Austrian authorities allowed ski tourism -- and the partying that goes with it -- to continue for another nine days before fully quarantining the resort on March 13. Bars in Ischgl were closed on March 10.

Even after a bartender tested positive for the virus, the medical authority of Tyrol -- where ski tourism is one of the biggest economic drivers -- reiterated in a news release on March 8 that there was "no reason to worry."

In a statement emailed to CNN, the provincial government denied it had dragged its feet, saying it acted in a timely and efficient manner.

But a clearer picture emerged when officials worked out what was going on in some of Ischgl's tightly packed bars and clubs. 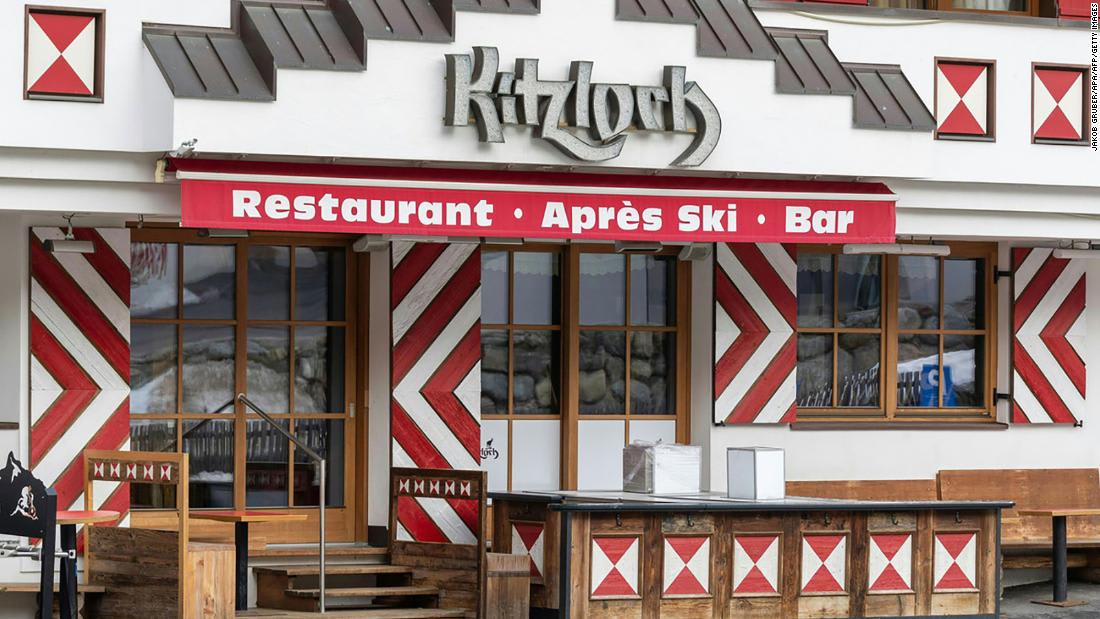 How an Austrian ski resort helped coronavirus spread across Europe