Japan reported five deaths due to the novel coronavirus on Sunday, its biggest one-day surge.

That takes the national toll to 49 deaths, the health ministry announced on Monday.

The ministry also reported 42 new cases of the novel coronavirus on Sunday, taking the national tally of confirmed cases to 1,801.

Of that total, 712 are from the Diamond Princess cruise ship.

The Indian capital New Delhi is among 75 districts in the country that will go into lockdown until March 31 in response to the coronavirus pandemic.

The measures extend an initial 14-hour lockdown, which came into effect on Sunday. They also include major cities, such as Mumbai, Bangalore, Pune, Hyderabad and Kolkata, which means millions of workers in the technology and financial sectors will be forced to work from home for the rest of the month.

Only essential services will be operational in these districts, according to the official Press Information Bureau of India.

All shops, commercial establishments, factories, workshops, offices, markets and places of worship will be closed, and interstate buses and metros will be suspended.

Several districts -- including the financial capital of Mumbai -- are now enforcing a pre-existing law that makes it a punishable offence for four or more people to gather.

In the northern state of Punjab, the chief minister announced that except for essential services, the entire state will be under a lockdown until March 31. The state has confirmed more than 20 coronavirus cases, including one death.

The entire state of Uttarakhand -- which has only reported three confirmed cases -- announced a non-essential services lockdown until March 31.

India has reported 341 infections and five deaths from the coronavirus, according to the World Health Organization.

The United Arab Emirates is closing all commercial centers and shopping malls along with fish, meat and vegetable markets.

The new rule will come into force in 48 hours, and will be in place for two weeks -- but could be renewed, UAE authorities announced.

The UAE currently has at least 150 coronavirus cases.

More than 154 million children in Latin America and the Caribbean are temporarily out of school due to the coronavirus outbreak, according to the United Nations International Children’s Fund (UNICEF).

That's about 95% of all kids who are enrolled.

Over the next few days and weeks, about 90% of early childhood centers, pre-primary, primary and secondary schools in the regions will be closed, according to the report.

And that percentage is quickly growing, UNICEF said.

“This situation, which could last longer than initially planned, increases the risk of permanent drop out, especially for the most vulnerable children,” UNICEF’s statement reads.

"Never have so many schools been closed at the same time. The expansion of the coronavirus Covid-19 will leave most boys and girls out of school in the coming weeks.
"If school closure is further extended, there is a great risk that children fall behind in their learning and we fear that the most vulnerable students will never return to school. It is vital that they do not stop learning from home.”

Children in many countries around the world have also been told to stay home, potentially putting their education and psychological well-being at risk.

A United States Secret Service employee has tested positive for coronavirus, the agency said in a statement. It said the employee, who is not being further identified, is currently in quarantine.

Here's what else the Secret Service said:

A key Senate vote related to a massive economic stimulus plan in response to the coronavirus pandemic is being pushed back about three hours as Democrats and Republicans jockey for advantage in the talks over the bill.

This is because Democrats are blocking the GOP’s ability to come into session before noon, which is something that requires the Democrats’ consent and is usually given without question.

In this case, Democrats don’t want to be forced to take the procedural vote Senate Majority Leader Mitch McConnell wanted to take at 9:45 a.m. E.T. They want the talks on the stimulus bill to continue without that deadline, which they have called artificial.

He warned the stock markets will now be open for three hours before they can get some certainty that a stimulus bill will pass the Senate.

Treasury Secretary Steve Mnuchin, who had several meetings with Schumer throughout Sunday as the various sides try to hammer out an agreement, is expected back on Capitol Hill Monday morning.

Then the Senate will come in at noon. There could be leader remarks from McConnell and Schumer. Around 1 p.m. E.T., the Senate will then cast votes on three procedural motions, the third of which is the one in question.

That said, if they actually cut a bipartisan deal before these votes are scheduled, they will likely toss these procedural votes aside and move directly to the bill.

What the bill aims to deliver: The emergency economic aid proposal could be worth over $2 trillion, according to Larry Kudlow, a top economic adviser to President Donald Trump. It would include direct payments to Americans under a certain income threshold, $200 billion in loans to airlines and distressed industry sectors and $300 billion in forgivable bridge loans for small businesses.

The proposal, a draft of which was obtained by CNN, underscores the scale of the economic crisis facing individuals and businesses across the country amid the accelerating pandemic and bolsters health care resources, student loans and aid, business tax provisions and temporary authority.

Read more about the bill here: 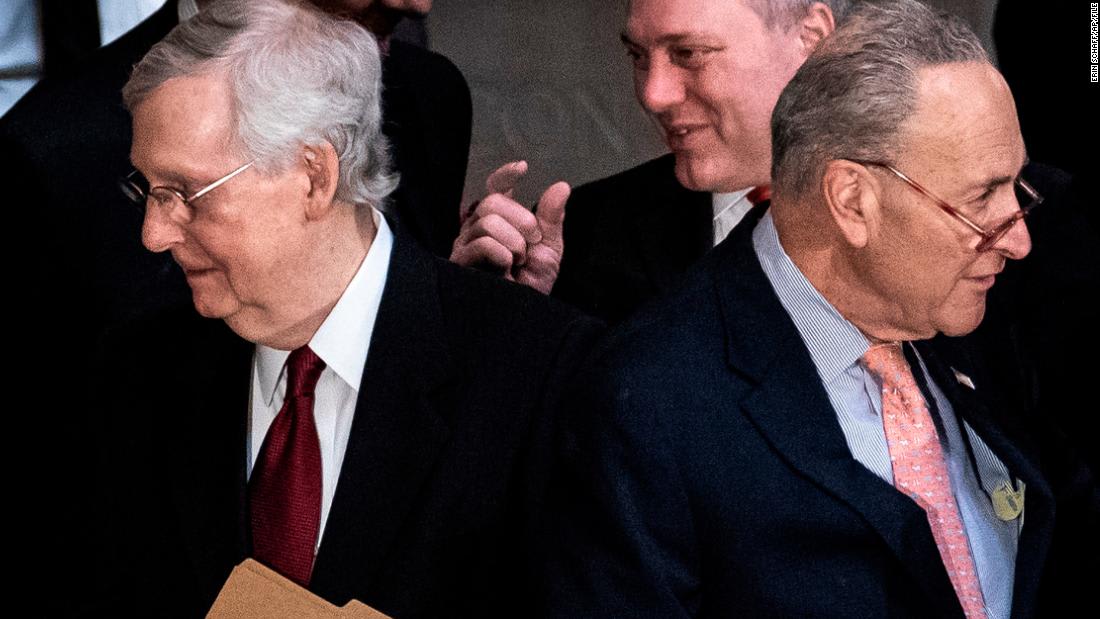 An inmate in California has tested positive for coronavirus, making them the first Covid-19 patient within the state's prison system.

The patient -- who is an inmate at California State Prison, Los Angeles County -- is in stable condition and is being treated on site, according to a news release from the California Department of Corrections.

He has been in isolation since March 19, after telling staff he wasn't feeling well. He was tested the next day, and received his positive test result on March 22.

Movement has been restricted at the institution while authorities investigate his contacts, and those deemed at-risk will be quarantined.

California's outbreak: California is one of the worst affected states in the US, with at least 1,468 confirmed cases and 32 deaths. California is also one of eight states to issue a stay at home order.

Issues in prisons: Other countries have struggled to deal with the coronavirus outbreak and prisons. At least 23 inmates are dead, and 87 injured following nationwide prison riots in Colombia prompted by coronavirus infection fears. At least 11 prisoners died in coronavirus-related riots in Italian prisons. In Iran, 85,000 prisoners were temporarily sent home to curb the spread of the coronavirus.

America's top infectious disease expert, Dr. Anthony Fauci, has described the challenges of working with the Trump administration during the coronavirus pandemic.

Asked how he responds to falsehoods from the President during news conferences, Fauci said, “I can't jump in front of the microphone and push him down."

“OK, he said it. Let's try and get it corrected for the next time,” Fauci said, according to an interview published by the journal Science.

The director of the National Institute of Allergy and Infectious Diseases, Fauci has advised six presidents and has played a central role in the White House’s coronavirus task force.

“I’m sort of exhausted,” Fauci said in the interview. “But other than that, I'm good. I mean, I'm not, to my knowledge, coronavirus infected. To my knowledge, I haven't been fired.”

Fauci said he and the President “disagree on some things.” But he described Trump as responsive, saying: “He goes his own way. He has his own style. But on substantive issues, he does listen to what I say.”

Virus timeline: Fauci was asked about some of Trump’s comments, including his assertion that China should have told US officials about the coronavirus three months sooner. That would have been around September, and there is no evidence Chinese officials were aware of the virus at that time.

Terminology: Fauci also said he had never used the term “China virus.” Asked if he ever would, Fauci responded, “No.”

The Haitian government has granted permission to private airline company Eastern Airlines to fly United States citizens out of Haiti, according to a statement from the US Embassy in Haiti on Sunday.

Passengers will have to book the direct charter commercial flights themselves, the statement read.

“The US Embassy in Haiti is working closely with the State Department Repatriation Task Force to assist U.S. citizens who wish to depart Haiti, while observing the Haitian Government’s measures to contain the spread of COVID-19,” it said.

What's going on in Haiti: On Thursday, Haitian President Jovenel Moise announced that Haiti is in full lockdown after announcing the country’s first two coronavirus cases.

One of the infected people is a 60-year-old Belgian man who traveled to Haiti from Europe recently. He runs an orphanage in Haiti. The other is a French citizen.