"We're about 10 days away now from seeing widespread shortages of ventilators, surgical masks, the things necessary to keep a hospital system running. We have seen next to nothing from the federal government at this point. We have seen — we've made this plea publicly, privately, letters, phone calls, very — very little has arrived," de Blasio said. "The military has not been mobilized. The Defense Production Act has not been utilized in any way I can see. Not just for New York City, New York state, for a lot of the country, it feels like we're on our own at this point. We're not seeing action from the federal government."

De Blasio said April is going to be worse than March regarding the Covid-19 outbreak in New York.

“If we don’t get more ventilators in the next 10-days people will die,” de Blasio said.

He went on to urge the President Trump to sign an order to mobilize the military to distribute ventilators and to have manufactures making ventilators at maximum production.

The Defense Production Act: The Federal Emergency Management Agency describes the act as "the primary source of presidential authorities to expedite and expand the supply of resources from the US industrial base to support military, energy, space and homeland security programs."

An executive order issued Wednesday afternoon indicated that the President will use the act to obtain "health and medical resources needed to respond to the spread of Covid-19, including personal protective equipment and ventilators."

The order also states that Health and Human Services Secretary Alex Azar may consult with other agency heads to determine "the proper nationwide priorities and allocation of all health and medical resources, including controlling the distribution of such materials ... in the civilian market, for responding to the spread of Covid-19 within the United States."

The massive emergency aid package being negotiated on Capitol Hill has grown to roughly $2 trillion as bicameral, bipartisan leaders are set to come together to try and clinch a final agreement, according to two people directly involved in the talks.

The fate of a the final proposal will be in the hands of the four congressional leaders and Treasury Sec. Steven Mnuchin, all of whom will gather in Senate Majority Leader Mitch McConnell’s office on Sunday.

The scale of the package – which has grown by over a trillion dollars over the course of several days and by more than $500 billion just during Saturday’s negotiations alone, the people said – underscore the recognition of the urgency brought on by the accelerating spread of the coronavirus pandemic that has all but shuttered the American economy over the last week.

Behind the scenes: Republicans staff worked through the night – some in the office past 3 a.m., people told CNN – to draft the legislative language to reflect the status of the negotiations between the four bipartisan working groups that have been cloistered in closed Senate hearing rooms for hours over the course of an urgent last few days.

Republicans have expressed optimism that a deal is in the offing, but there are still a handful of hurdles that have kept Democratic negotiators from fully signing on.

That said, lawmakers on both sides acknowledge that a deal is imperative as soon as possible, with a procedural vote to move forward on the package set for Sunday afternoon and a final vote to pass any agreement set for as soon as Monday.

Treasury Secretary Steven Mnuchin said Sunday that lawmakers have a "fundamental understanding" that a deal has been reached to pass a massive stimulus bill to a staggering economy reeling from the coronavirus as soon as Monday.

"I do think it will get done. We've been working around the clock in the Senate with Republicans and Democrats. I've been speaking to (Senate Majority Leader) Mitch McConnell, (Senate Minority Leader) Chuck Schumer, the (House) Speaker and I think we have a fundamental understanding and we look forward to wrapping it up today," said Mnuchin, in an appearance on "Fox News Sunday."

Mnuchin explained that the bill, which could cost trillions, has several components: small business retention loans, which will give small business two weeks of cash flow to retain their employees and keep up with overhead; direct deposits, which would be approximately $3,000 for the average family of four; enhanced unemployment insurance, which was a sticking point in the talks; and a "significant package" of $4 trillion in liquidity, working with the Fed, to support the economy and broad-based lending programs.

Mnuchin said the bill is structured based on a 10-to-12 week scenario, and that if in 10 weeks coronavirus is still ravaging the country, the administration would return to Congress to ask for more.

Illinois Gov. J.B. Pritzker complained that states are competing against each other for key supplies and there needs to be more federal coordination on these goods, he said in an interview with on CNN's “State of the Union” Sunday.

As a result, everyone is competing against each other jurisdictions are paying higher prices, Pritzker said.

“We need millions of masks and hundreds of thousands of gowns and gloves and the rest. And unfortunately, we're getting still just a fraction of that. So we're out on the open market, competing for these items that we so badly need and we're succeeding in some ways. but we still need more,” Pritzker said.

The Detroit Metro Times started the year on a celebratory note, having reached its 40th anniversary. This week, its staff was slashed from 16 to eight employees after its parent company Euclid Media Group announced layoffs across its seven newspapers as the coronavirus pandemic sweeps the country, crippling businesses in its wake.

Music editor Jerilyn Jordan was told in a conference call on Wednesday that she was one of the remaining employees but staying on would mean a 10% pay cut.

"Everything changed in a week," Jordan told CNN Business. "For a minute, I could comfortably glide into work and know that I had some concert announcements to post. But then it became writing about cancellations and postponements and rescheduling. Now that's come to a halt because guess what? Let's just assume everything was f**king canceled."

With local events canceled and restaurants and bars shuttering to crack down on the gathering of large crowds, local newsrooms have not only had to change their coverage. They have also lost out on crucial ad revenue and places to distribute their print products.

These changes have an outsized effect on alt-weeklies which rely heavily on advertising from events and local businesses.

"I think I'm a fairly good salesperson, but to be able to convince someone to run an ad for an event they're not having is beyond my capabilities," Jeff vonKaenel, president, CEO and majority owner of the News & Review newspapers in Sacramento, Chico and Reno told CNN Business. "Now businesses where I normally distribute papers are closed so it's not going to work. There was essentially no revenue stream and no effective way to get out the paper."

Unemployment in Israel surged to 16.5%, the country's Employment Service said in a statement Sunday morning, up from around 4% before the coronavirus outbreak began.

More than 500,000 workers registered for unemployment benefits with the Employment Service in March alone.

A doctor in France died from coronavirus on Saturday night, the country’s health minister Olivier Véran has announced.

The minister added: “This is a first, as far as I know.”

Medical professionals in France have been battling a rising number of coronavirus cases. The number currently stands at 12,475, with 450 confirmed deaths.

Véran did not give any details about the deceased. 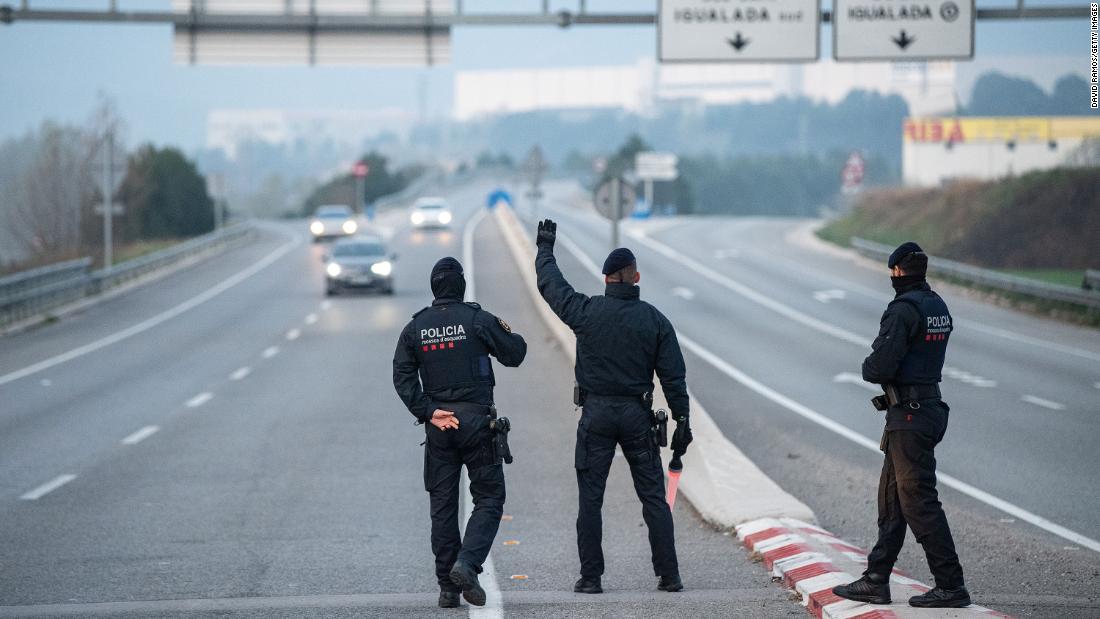 The people of Andalusia, Spain's most populous region, are among the most gregarious in the world. There are a ridiculous number of bars and cafes per capita, and as the weather warms Andalusians begin the evening paseo, wandering the narrow streets and watching the world go by over a beer and tapas.

But not this year.

Easter week -- Semana Santa -- in Andalusia is arguably more important than Christmas, a time for candle-lit parades, the caminos de pasion, to celebrate the Virgin Mary and the resurrection of Jesus. Centuries-old floats, held aloft by 20 men or more, lurch through the streets and the air is heavy with incense.

Now, they are canceled. The authorities are promising Easter celebrations will happen, but in September.

Fernando Alcala Zamora, a young journalist in my hometown of Priego de Cordoba, says the change of lifestyle is utterly alien to Andalusians.

"I think quarantine or 'social distancing' are terms that contradict the very definition of how we relate with each other and enjoy our days, of who we are, so it's a big challenge for many," he said.

Read more from the lockdown in Andalusia here.

Spanish Prime Minister Pedro Sanchez has been in meetings with health and security officials on Sunday morning, as Spaniards prepare for a possible extension of their country's state of emergency.

Sanchez is expected to address the nation in a televised speech later on Sunday.

It comes with the country's death toll from the virus accelerating. The country's health ministry said on Sunday that another 394 had died in just the past 24 hours, bringing the total number of confirmed fatalities to 1,720.

"There are hard days ahead," Sanchez said in a televised briefing on Saturday. "We have to get ready from a physiological and emotional standpoint. We have to get to the end of next week strong, very strong. The risk is everywhere."

Spain has been locked down and placed in a state of emergency since Friday March 13. The period was initially expected to last 15 days, but cases in the country continue to soar as that deadline approaches.

Emergency hospitals have been set up across the country, while residents have been urged to stay indoors and normally busy streets are deserted.

Almost 25,000 cases have been reported in total, with a drastic spike of 5,000 new cases reported on Saturday.

"Spain is among the most-affected countries in Europe and in the world," Sanchez said on Saturday, adding that the worst is still to come.

In an effort to strengthen Spain's response to the health crisis, Sanchez announced the national production of masks, ventilators and tests. Meanwhile, the government has bought 640,000 reliable ratified fast tests, which will soon be 1 million, and within the next few hours 1.3 million masks will be handed to health personnel and patients, Sanchez said.