The numbers: As of midnight in Geneva, the World Health Organization has recorded 173,344 coronavirus cases and 7,019 deaths globally.

A separate tally from the Johns Hopkins University, which is tracking cases reported by the WHO and additional sources, puts the number of cases at over 182,400 with at least 7,100 deaths. Over 79,000 patients have recovered around the world, according to Johns Hopkins.

The number of coronavirus deaths outside China have now surpassed the number of deaths inside.

Global lockdowns: Parts of China, Italy, Spain, the Philippines, and Lebanon have put their citizens under partial or total lockdown. France has issued restrictive measures that require all vehicle and pedestrian movements to be justified and Malaysia will impose a nationwide movement control order that bars citizens from traveling abroad, while foreign tourists and visitors will be restricted from entering the country.

Restrictions on daily life: Countries all over the world have closed borders, expanding restrictions on travel and daily life, issued bans on public gatherings and told citizens to work from home or not to leave the house.

Situation in the US: Cases have surpassed 4,400 and at least 87 people have died. The White House recommends people avoid gatherings of more than 10 people, and a growing number of US states and cities have announced widespread mandatory closures as part of attempts to curb the spread of the virus. Top US health care officials have warned the country doesn't have enough stockpiled medical equipment like masks and gloves to deal with the coronavirus pandemic. Ohio Gov. Mike DeWine said that the state's health director will order presidential primary polls closed Tuesday "as a health emergency."

Tokyo 2020 Olympics: Japanese Prime Minister Shinzo Abe said today that he "secured support" from G7 leaders to hold the Games in their "complete form,” which would provide "proof that the world has contained coronavirus." Japan has faced calls to cancel the Olympics for weeks.

Shanghai has listed 12 countries from which arriving travelers would be quarantined for 14 days.

“From now on, all travelers who have been in South Korea, Italy, Iran, Japan, France, Spain, Germany, the United States, United Kingdom, Switzerland, Sweden, Belgium will have to self-quarantine for 14 days," said a statement from the city's municipal government.

Officials had announced the policy on March 3, but didn't publicly name the specific locations.

This comes as the number of imported cases from overseas are on the rise -- and as domestic cases of community transmission have drastically fallen.

New measures and restrictions will go into effect today in France, limiting people's movements and activities as the country's coronavirus cases continue to spike.

All vehicle and pedestrian movements nationwide will have to be justified -- meaning "each person, for each movement, will need to fill a document, stating on their honor, the reason of their movement,” French Interior Minister Christophe Castaner said yesterday.

Some professions will be able to use their work certificate as proof of justification, and journalists with press cards are allowed to move around “as information plays a major role in the fight against the virus."

War against coronavirus: The new measures were announced shortly after President Emmanuel Macron said the country was “in a war” against the pandemic, and announced additional measures banning gatherings across France -- including family and social gatherings.

France has seen dramatic jumps in coronavirus case numbers these past two weeks, reporting hundreds of new cases a day. It's now one of the countries with the highest number of cases, at 6,655 total, according to Johns Hopkins University.

Europe under lockdown: It's not just France imposing drastic new measures; much of Europe is now under lockdown and travel restrictions.

This version of Donald Trump will save lives.

The President offered Americans something they have rarely seen from him in his latest and most somber press conference yet on the coronavirus pandemic on Monday.

He dispensed unimpeachable information based on fact. He called for national unity and seemed like he meant to help forge it. And he ditched his normal habit of hyping the best possible outcome to a situation with improbable superlatives -- instead communicating the gravity of a fast-worsening crisis.

"It's bad. It's bad," Trump said as he unveiled a 15-day plan to try to flatten the curve of new infections to alleviate a feared surge of sick patients that could overwhelm the health system.

"Each and every one of us has a critical role to play in stopping the spread and transmission of the virus," Trump said, summoning national resolve as he plunges deeper into a crisis that will now define his term and possibly his reelection hopes.

It's a clear change in direction. The President's pivot to seriousness contrasted sharply with some of his previous commentary on the pandemic, which he has compared to the flu and predicted could just go away, and came after he claimed he had "shut it down" and had the disease under control.

Why it matters: It will take more than one serious news conference to turn the tide of the pandemic -- but it was such an unusual performance that he may stand a chance of shocking watching viewers into action and getting them to fully understand the desolate reality of the coming weeks. 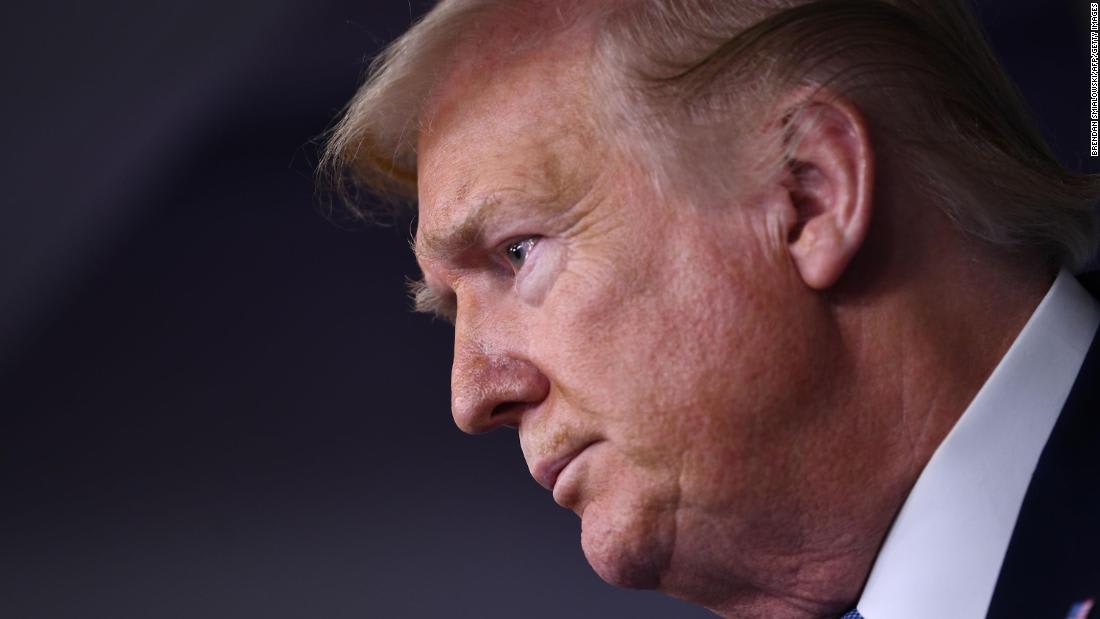 A passenger who disembarked a cruise ship in Grand Cayman just over two weeks ago has since died of coronavirus, the Italian cruise company Costa Cruises confirmed to CNN on Monday.

In the statement to CNN, Costa Cruises said the passenger was aboard the Costa Luminosa ship, and disembarked in Grand Cayman on February 29. The passenger died on Saturday.

Costa Cruises said the man was one of three passengers who tested positive for the virus on the ship, but from two separate journeys. The other two infections -- a husband and wife -- disembarked in Puerto Rico on March 8 from a later Costa cruise journey.

The Cayman Islands government had first announced the death on Saturday, saying the 68-year-old patient was the first confirmed coronavirus case in the territory.

The patient had preexisting conditions. The man was a "cardiac patient who was traveling on a cruise ship when he was admitted to Health City in critical condition for urgent cardiac treatment on 29 February," said the government statement.

The statement added the patient "had two cardiac arrests and was resuscitated" on the way to the Cayman Islands, and had a prior medical history of cardiac issues. He was hospitalized upon arrival.

There are at least 4,475 cases of the novel coronavirus in the United States, according to state and local health agencies and the Centers for Disease Control and Prevention.

70 cases are repatriated citizens, like those evacuated from China or the Diamond Princess cruise ship in Japan.

4,405 cases were detected, tested, and confirmed in the US.

Washington and New York are the hardest hit states, both with more than 900 cases each. California follows with 450 cases.

Only one state has yet to report a coronavirus case -- West Virginia.

The death toll remains at 87.

Singapore's Trade and Industry Minister Minister Chan Chun Sing has sought to allay fears that it will run out of food stocks and other supplies.

"While we may have to make some adjustments to our choices, we do have sufficient supplies for all Singaporeans, so long as we buy responsibly," Chan said in a televised news conference.

Singapore imports 90% of the food it consumes and there has been a rush on panic buying in recent weeks, with concerns that the coronavirus pandemic will disrupt the city state's food supplies.

Those fears grew on Monday after Malaysia announced it will impose a nationwide movement control order that bars citizens from traveling abroad, while foreign tourists and visitors will be restricted from entering the country.

Contingency plans and stockpiling: Chan said Singapore has a contingency plan in place for such a scenario and that food stocks will be sufficient.

"A disruption of supplies from Malaysia is one of the contingency scenarios that we have planned for over the many years," he said. "As such we have plans to manage this contingency with a combination of stockpiling, local production and also diversification of the overseas sources for our supply."
"This will allow us time to bring alternative supplies should our usual supply lines be disrupted," he said.

A religious gathering at a mosque in the Malaysian capital Kuala Lumpur is at the center of a cluster of coronavirus cases in Southeast Asia.

From February 27 to March 1, about 16,000 people attended a four-day "Ijtima Tabligh", or religious gathering at the city's Seri Petaling Mosque, according to Malaysia’s health ministry.

About 1,500 of those attendees were foreigners, with many traveling from around the region.

Malaysia: On Monday, Malaysia confirmed 125 new cases in the country, 95 of which are linked to the religious gathering. On Sunday, the country reported 190 new cases, with most of those new infections linked to the meeting, the health ministry said. Malaysia has over 550 cases in total, according to the World Health Organization.

Brunei: Most of Brunei's 54 reported coronavirus cases are people who attended the gathering or had close contact with people who did, according to numbers from the country's health ministry.

Cambodia: Of 12 new coronavirus cases reported in Cambodia on Monday, 11 are from the religious gathering in Malaysia, according to the country's health ministry and Reuters.

Singapore: 90 people from Singapore were identified as having attending the event, and five of those have tested positive for coronavirus, according to the Islamic Religious Council of Singapore.

New Zealand today announced a $7.3 billion financial package aimed to "support New Zealanders and their jobs from the global impact of Covid-19."

In a news release, Finance Minister Grant Robertson said the pandemic was going to have a "significant" effect on the country's economy, and that the package aims to "soften that impact."

The package includes a $302 million boost for the health sector, $1.79 billion in tax changes to free up cash flow, and $3.2 billion for wage subsidies for affected businesses in all sectors and regions.

The package represents 4% of the country's GDP, Robertson said. He added that this isn't a one-off measure: "It is just the beginning. As we go through this crisis towards economic recovery the government will be constantly monitoring the situation and adjusting its response."

This comes just days after the government announced that all travelers entering the country, including New Zealand citizens, will have to self-isolate for 14 days upon arrival.

New Zealand currently has 11 confirmed cases of the coronavirus.