Disinfecting efforts are underway at the Sydney Opera House and health officials are tracking down concert goers who attended a small Rita Wilson performance there last Saturday, after the singer-actress and her husband, Tom Hanks, revealed they tested positive for the novel coronavirus.

The venue had already implemented several health and safety measures prior to the performance including on-site cleaning with hospital-grade disinfectant according to the spokesperson, who added that the Opera House remains open unless otherwise advised.

"I don't think there was confusion," Pence told CNN's New Day on Thursday.

"The President took another historic step, just like he did in January with China," Pence said of earlier travel restrictions.

"The epicenter of the coronavirus has shifted from China to Europe," he added.

"The health team came into the Oval Office, presented (the latest information) to the President, and he made the decision on the spot after hearing from all sides that the best thing we could do is suspend all travel," said Pence.

A glimmer of hope from Chinese respiratory expert Zhong Nanshan on Thursday, who told a press conference that the coronavirus pandemic could end by June if the hardest hit countries take enough measures.

Zhong, the director of China’s National Clinical Research Center for Respiratory Disease, originally made the prediction on March 9, and said he still stands by it.

“If some countries do not pay attention to the harm and infectiousness of the pandemic, and do not carry out strong intervention, it may take longer,” Zhong said during the conference held by the Guangdong provincial government.
“Normally, in the summer when the temperature is relatively high, the virus is relatively less active.”

Zhong is known for his work against SARS and has previously predicted that the virus in China would peak by mid-to-late February and be under control by the end of April.

Six-time Formula One World Champion, Lewis Hamilton, said on Thursday it’s “shocking” that Formula 1 has pressed ahead with this weekend's Australian Grand Prix amid the global coronavirus pandemic.

“I am really very, very surprised that we're here. I don't think it's great that we have races but it really is shocking that we're all sitting in this room,” Hamilton told an official pre-race press conference at the circuit venue – Albert Park in Melbourne.

"It seems that the rest of the world is already reacting a little bit late, but you have seen this morning with (President Donald) Trump shutting down the border to Europe to the States, the NBA suspended, yet Formula One continues to go on.”

Asked why he felt the race was still going ahead as planned, Hamilton replied: “Cash is king.”

Fellow Formula One driver, Ferrari’s Sebastian Vettel, who was also in attendance at the same press conference, said: “It is very difficult having a fair judgement, but I do realize a lot of sporting competitions get cancelled and it is fair to ask the question why you are here. We have to trust FIA (Motorsport’s Governing Body) and for them to take all the precautions but the answer no one can give you is how much you can control what is going on.”

Australian Grand Prix Corporation chief Andrew Westacott said in a statement he was “monitoring the situation in conjunction with Formula 1 and the FIA” and working closely with health authorities to take additional precautions at Albert Park, including having hand sanitizers at public areas and corporate facilities.

The first practice sessions of the new season are due to begin on Friday at Albert Park with the race itself scheduled to take place on Sunday.

Austria announced its first death from the coronavirus on Thursday morning.

Vienna city authorities told CNN that the patient was a 69-year-old man who had recently travelled to Italy. He was treated at the Kaiser Franz-Josef hospital in the Austrian capital.

According to the country's health ministry, as of Thursday morning Austria has 302 confirmed cases.

The International Basketball Federation, or FIBA, announced today that it was suspending all of its competitions as of tomorrow.

“Considering the current situation with the coronavirus (COVID-19) outbreak and in order to protect the health and safety of players, coaches, officials and fans, FIBA today has announced that all FIBA competitions are suspended as of tomorrow, Friday, 13 March 2020.
FIBA will continue to monitor the situation on a daily basis and will evaluate the options for the continuation or not of the respective competitions when and if the situation allows for it."

This move comes after the NBA announced late Wednesday night local time that it was canceling its entire regular season.

Following President Trump's shock announcement that the US would be suspending travel from dozens of European countries in a bid to limit the spread of coronavirus, many experts had expected Australian Prime Minister Scott Morrison to follow suit in a national address later Thursday.

It wasn't the case. Instead, Morrison said the country -- which has 140 reported cases of the virus -- was prepared to handle the outbreak.

Australian Treasurer, Josh Frydenburg, told public broadcaster the ABC that the best medical advice to the government has been to keep the current travel restrictions in place and not to widen it out to the rest of Europe.

He added that the country had already acted quickly to restrict travel from China, Iran, South Korea and Italy.

Italian footballer Daniele Rugani, who plays for Juventus, said he was fine today after he tested positive for the coronavirus yesterday.

“You've read the news, so I want to reassure everyone who's worried about me, I'm fine,” Rugani wrote on Twitter.
“I urge everyone to respect the rules, because this virus makes no distinction! Let's do it for ourselves, for our loved ones and for those around us.”

Rugani has made seven appearances this season, including two in February. He was on the bench for last Sunday's win against Inter Milan, which was played behind closed doors at Juventus’ Allianz Stadium.

The Italian Football Federation said after a meeting on Tuesday that the Serie A season may not finish because of the outbreak. Alternative options being considered include staging play-offs, not having a champion for 2019-20 or declaring the current standings final.

China remains by far the most affected country in terms of coronavirus cases and deaths; it has had 80,793 infections and 3,169 deaths since the pandemic began in December last year.

But as the United States and Europe grapple with a growing number of cases, the rate of new infections in China has slowed significantly.

China's Hubei province, the epicenter of the pandemic, was reporting thousands of infections per day just weeks ago. Yesterday, there were only eight new infections reported there, the country's National Health Commission said.

Xi visits Wuhan: On Tuesday, Chinese President Xi Jinping made his first visit to the Hubei provincial capital of Wuhan since the outbreak began more than two months ago, an apparent sign of confidence that the country's preventative measures -- including sweeping travel restrictions -- are beginning to work.

Hubei authorities said in a statement Wednesday that the government will gradually allow businesses to reopen and bring public transport back online, key steps in the push to get life back to normal.

This will help the battered economy: Beijing's decision to keep factories shut and restrict the movement of tens of millions of people has affected everything from property sales, to local business operations and major supply chains in the world's second-biggest economy. Stock markets worldwide have reacted with wild swings in part due to coronavirus-related fears about the global economy. 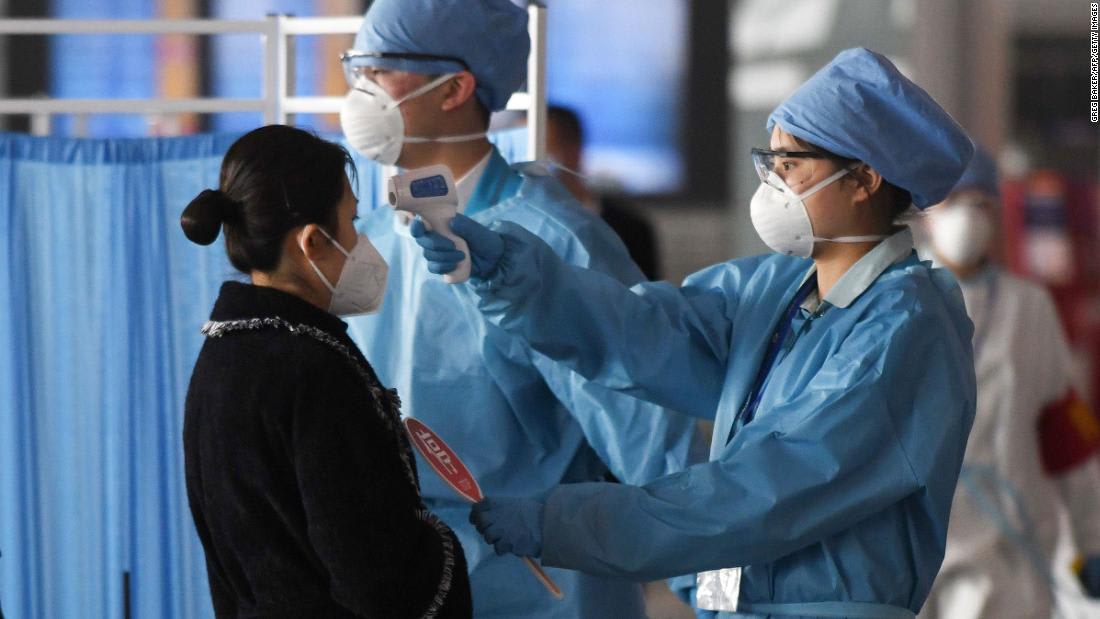 Beijing is enforcing a 14-day quarantine on international travelers, as coronavirus cases surge