Our live coverage of the protests has ended. Read up on the latest news below.

It's been a long week at the COP26 climate conference in Glasgow and after a flurry of big announcements in the past few days, the theme of the day on Friday was the impact of climate change on future generations.

Here's what happened if you missed it.

The focus turned away from the suits and briefcases in the conference venue to the city center, where thousands of kids made sure their voices were heard by marching though the town.

Young activists poured into Glasgow from all over the world, demanding action from leaders at a Fridays for Future demonstration.

The headliner of the event, Greta Thunberg, called the COP event a "Global North greenwash festival" and said "it should be obvious that we cannot solve a crisis with the same methods that got us into it in the first place."

A word about the "good news" from IEA

Several analysts have poured cold water over the International Energy Agency's (IEA) assessment that global warming could be limited to 1.8 degrees Celsius above pre-industrial levels by 2100, if all COP26 commitments made as of Wednesday night are fulfilled on time. The IEA was asked by the COP26 President Alok Sharma to keep tabs on the pledges.

Mark Maslin, a professor of earth sciences at University College London, wasn't convinced. "This is irresponsible, because this is only true if all the country pledges are met and their policies are 100% effective -- which they never are," Maslin told CNN. "It's almost like the IEA wants to tell everyone the job is done and we have solved climate change, whereas we climate scientists know we are still a long, long, way from 2 degrees let alone 1.5 degrees."

Al Gore says the tools are in our hands

Former US Vice President Al Gore had a lot of praise for the young people marching through Glasgow on Friday. Speaking during the official conference, he said the world leaders need to "legitimize their expectations for a future that is worthy of them."

"We can do so but we must put the period of delay and distraction and expedience in the past, recognize that we have entered a period of consequences and make it a period of solutions," he said.

Gore, a fierce climate change advocate, said humanity has the power to save the world, if the political will could be mustered. "It's as if we can throw a switch and save the future of our civilization," Gore said. He also emphasized a common theme this week: that promises are great, but they must be kept in order to have an impact.

"We have the tools that we need to solve the crisis. We have heard pledges that will move us in a long direction toward these solutions. We must ensure that these pledges are kept," Gore said.

US Secretary of Energy Jennifer Granholm announced Friday the Department of Energy has a new goal: Dramatically reduce the cost of removing carbon dioxide from the atmosphere.

Granholm said Friday at COP26 that the DOE's goal is to reduce the cost to $100 per ton of carbon by 2030. Right now, the department estimates it costs roughly $2,000 per ton.

Scientists say removing greenhouse gas from the atmosphere is crucial to achieving net-zero emissions by 2050 and keeping global warming below 1.5 degrees Celsius. But the technology is still relatively young and incredibly expensive. It also needs to be scaled up significantly in order to make a dent in what humans have already emitted.

The first week of the COP26 summit will wrap up on Saturday and the negotiations of some of the key aspects of the Paris Agreement are well under way. The national delegates are still trying to figure out how to implement article six of the treaty, which sets out the need for carbon emission trading.

They are also attempting to find an agreement on emission cutting transparency rules, which include questions like how often countries need to report their progress and how to avoid double counting.

Vanessa Nakate was 21 when deadly floods inundated vast swaths of East Africa in 2018. She didn't consider herself a climate activist at the time, but soon after that disaster she and her younger siblings and cousins decorated placards and started climate protests in her home city of Kampala, the capital of Uganda.

As intensifying storms, devastating wildfires, and unrelenting drought wreaked havoc in Africa and around the world, Nakate publicly called out governments for not doing enough to make the Earth habitable for future generations. She says the youth understands the urgency of divorcing from fossil fuels much better than older generations.

"I want to see leaders, governments, and corporations rise up for the people," Nakate told CNN. "And that means putting an end to fossil fuel projects. Like I always say: we cannot eat coal, we cannot drink oil, and we cannot breathe so-called natural gas."

Nakate's generation is coming of age in a world that is warming far faster than scientists had predicted, and they see with clear eyes the climate catastrophe that looms.

They are challenging the structures of power that they are squeezed out of, elbowing their way into conversations in order to have a say in their own futures. They are funneling their anxious energy into climate rallies and protests, skipping school to sit outside Parliament buildings and UN headquarters for long hours, and calling out governments at public forums, like the COP26 climate summit, for the continued use of fossil fuels.

Read about what other young activists are doing here: 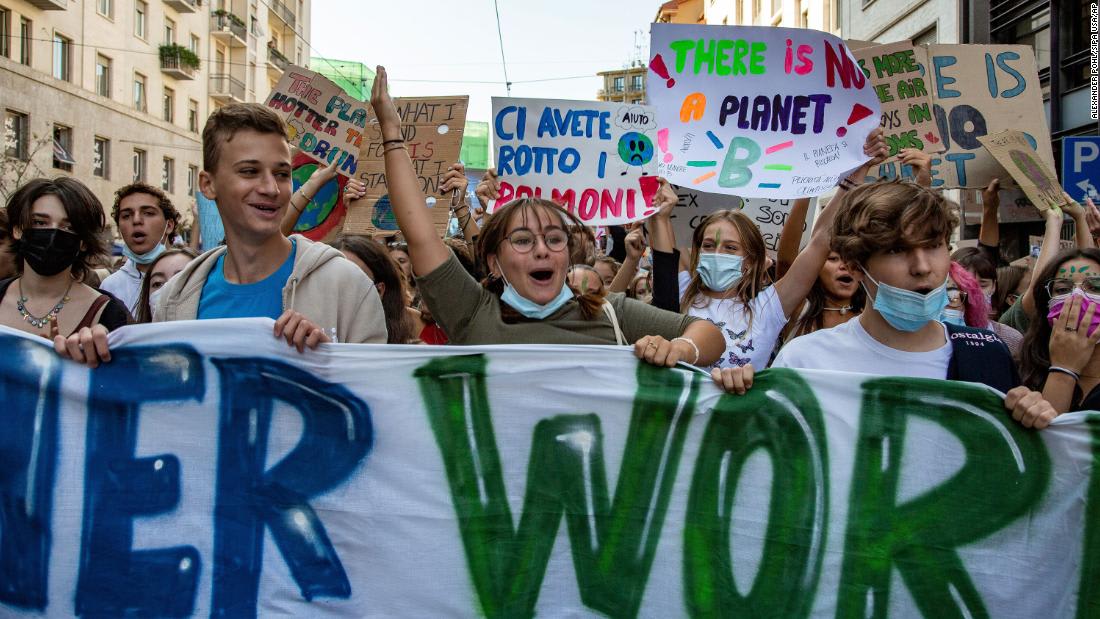 Generation Climate: How the crisis made young people the adults in the room

Greta Thunberg criticized world leaders and called the COP26 summit a "failure" on Friday, as she led a huge youth protest outside the venue of the climate summit in Glasgow.

Young activists poured into the Scottish city to demand action from leaders, as the focus of the official event turned toward the impact of climate change on future generations.

But in the headline speech of the demonstration, Thunberg told crowds that "history will judge them poorly," calling the pivotal conference "a global greenwash festival" and "a two-week long celebration of business as usual."

"Many are starting to ask themselves, what will it take for the people in power to wake up? But let's be clear: they are already awake. They know exactly what they are doing," she said.

The leaders are not doing nothing. They are actively creating loopholes ... to benefit themselves."

Her remarks come after several of the major players present at the conference talked up the achievements of the first week. Leaders have so far announced a series of climate pledges at the conference, including a deforestation commitment, a deal on coal and a plan to stop investing public finances into fossil fuel projects abroad.

But many experts and young activists in Glasgow urged more radical commitments, as the United Nations warned that the world is not adapting fast enough to the climate crisis.

Thousands of demonstrators covered the city's streets on Friday, with many bearing placards that warned of the effects of rising temperatures and extreme weather events.

Thunberg spoke to protesters more than three years after she founded the "Fridays for Future" school strikes movement that galvanized youth action over climate change.

"Some people say that we are being too radical," she told an adoring audience. "But the truth is that they are the ones who are radical. Fighting to save our life supporting systems isn't radical at all."

Thunberg's speech came after a week in which she has been mobbed by supporters and members of the media. 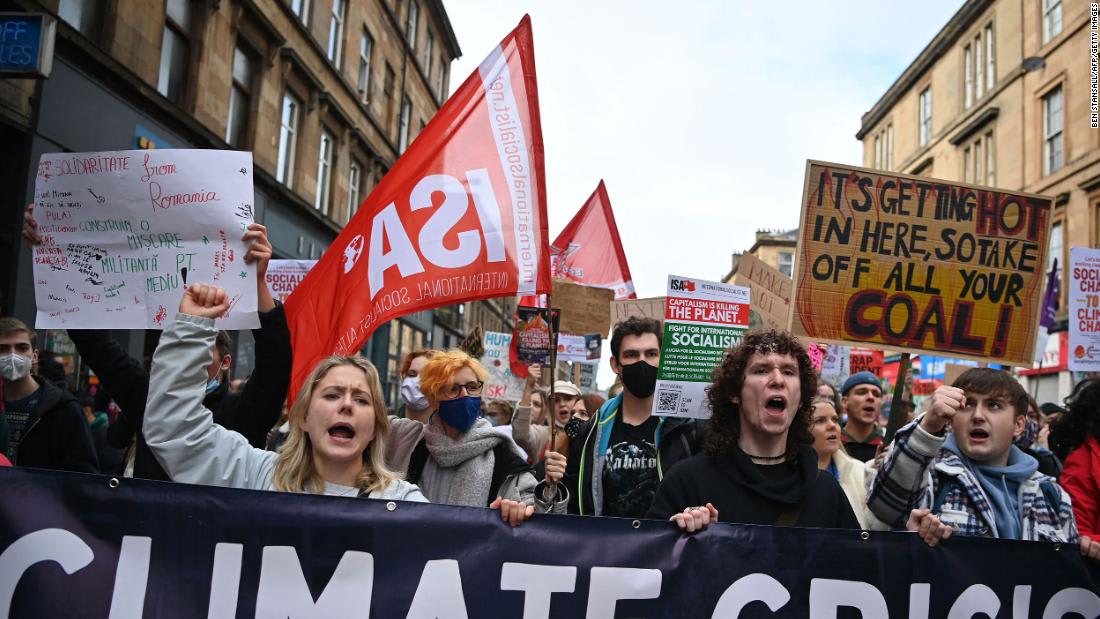