Our live coverage of this story has ended. Read about how the event unfolded in the posts below.

Chinese President Xi Jinping is scheduled to release a pre-written statement addressing delegations at COP26 on Monday, according to a list of speakers released by the United Nations.

Xi is listed last after a number of heads of state and government due to speak on Monday, followed by a note that reads: "Written statement to be uploaded on the conference website."

When asked about whether China's leader was planning to attend COP26, foreign ministry spokesman Wang Wenbin said on Monday that the "information will be released in due time."

Xi is one of a small number of high-profile leaders not attending the summit. The Chinese president hasn't left the country since the onset of the pandemic.

More than 120 world leaders will begin speaking to the conference at 1:45 p.m. local (9:45 a.m. ET) on Monday after an opening session including speeches by UK Prime Minister Boris Johnson, Prince Charles and celebrated naturalist David Attenborough. Kicking off the leaders' speeches after that are Spanish President Pedro Sánchez Perez-Castejón and German Chancellor Angela Merkel. There is a strict three-minute limit on speeches.

World leaders are starting to arrive at the SEC centre in Glasgow, Scotland, where they are being greeted by Britain's Prime Minister Boris Johnson. The greetings have been a series of elbow bumps and social-distanced hand gestures.

The Group of 20's leaders' summit ended Sunday with an agreement on climate that commits its member nations to end coal financing by the end of the year and aims to contain global warming to 1.5 degrees Celsius above pre-industrial levels.

But the final communiqué lacked firm pledges and failed to put an end date on the actual use of coal. It didn't make any commitments to improve on issues like climate finance, paving the way for difficult negotiations at the COP26 summit.

Mohamed Adow, director of the climate energy think tank Power Shift Africa, said the message from the G20 was "weak."

"This weak statement from the G20 is what happens when developing countries who are bearing the full force of the climate crisis are shut out of the room. The world's biggest economies comprehensively failed to put climate change on the top of the agenda ahead of COP26 in Glasgow," Adow said.

In the final statement, the 20 biggest world economies said they "would accelerate our actions" to achieve net-zero emissions by or around mid-century. Leaders for the first time acknowledged officially that its members' emissions reductions plans, known as Nationally Determined Contributions (NDCs), needed to be firmed up over this decade to put them on track for net zero by 2050.

They said they recognized that "G20 members can significantly contribute to the reduction of global greenhouse gas emissions" and committed "to take further action this decade" on enhancing "where necessary" their emissions-reductions pledges for the year 2030.

"We recognize that the impacts of climate change at 1.5°C are much lower than at 2°C," the communiqué states.

"Keeping 1.5°C within reach will require meaningful and effective actions and commitment by all countries, taking into account different approaches, through the development of clear national pathways that align long-term ambition with short- and medium-term goals, and with international cooperation and support, including finance and technology, sustainable and responsible consumption and production as critical enablers, in the context of sustainable development."

Read more about the agreement here: 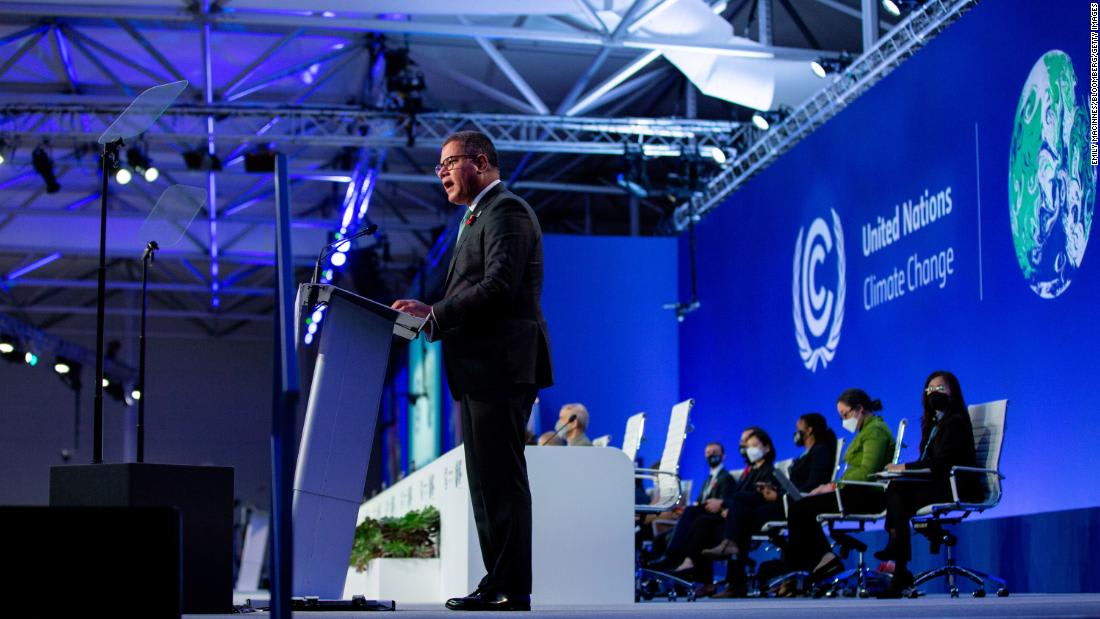 Leaders at COP26 will discuss ways to reach net-zero emissions by mid-century. Net zero can be achieved by removing as much greenhouse gas from the atmosphere as what's emitted, so the net amount added is zero.

To do this, countries and companies will need to rely on natural methods — like planting trees or restoring grasslands — to soak up carbon dioxide (CO2), the most abundant greenhouse gas we emit, or use technology to "capture" the gas and store it away where it won't escape into the atmosphere.

Dozens of countries have already pledged to achieve net zero by mid-century and there is huge pressure on countries that haven't yet to do so at COP26.

There's a lot more jargon to get a grasp on if you're following COP26. Read more here for a guide on what these words actually mean: 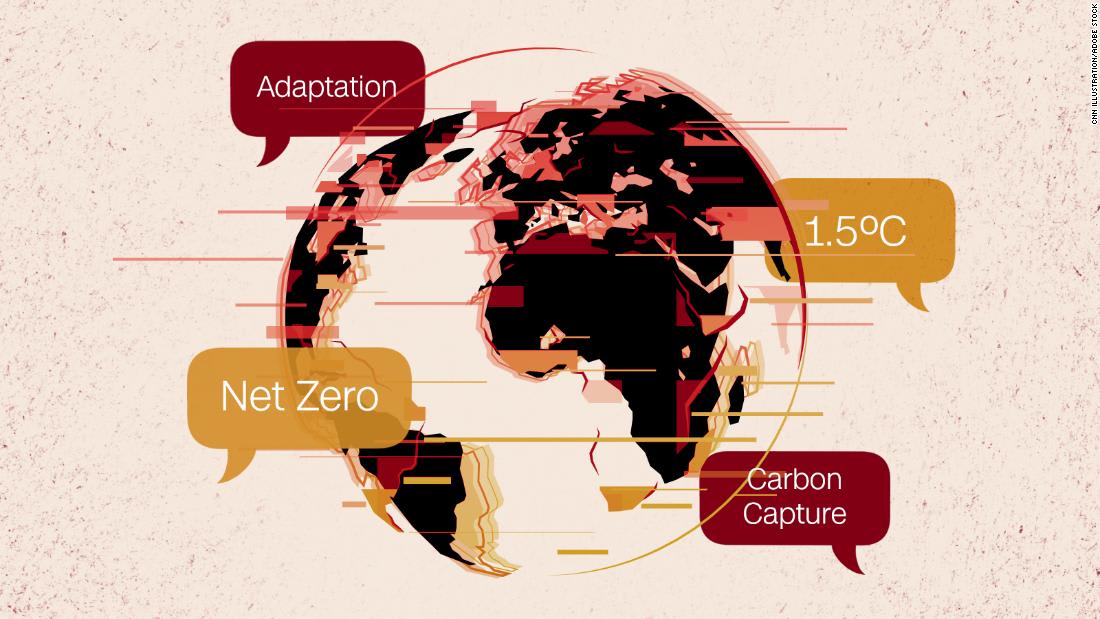 What does 'net zero' mean? Our climate change glossary will help you sound smart

Alok Sharma — a British lawmaker and the COP26 President — has said he wants this year's conference to reach agreement on a number of key targets, including:

COP is short for the Conference of the Parties to the UN Convention on Climate Change, which is an event that takes place annually, though it was postponed last year because of the Covid-19 pandemic. World leaders do attend, but a lot of the discussions take place among ministers and other high-level officials working on climate issues. The 26 signifies that this is the group's 26th meeting.

The conferences are massive events with a lot of side meetings that attract people from the business sector, fossil fuel companies, climate activists and other groups with a stake in the climate crisis. Some of them are successful — the Paris Agreement was hammered out during COP21, for example — and some are painfully unproductive.

More than 190 countries signed onto the Paris Agreement after the COP21 meeting in 2015, to limit the increase in global temperatures to well below 2 degrees Celsius above pre-industrial levels, but preferably to 1.5 degrees.

Half a degree may not sound like a huge difference, but scientists say any additional warming past 1.5 degrees will trigger more intense and frequent climate extremes. For example, limiting warming to 1.5 degrees instead of 2 degrees could result in around 420 million fewer people being frequently exposed to extreme heatwaves, according to the UN.

Scientists see 2 degrees as a critical threshold where extreme weather would render some of the world's most densely populated areas into uninhabitable deserts or flood them with sea water.

Although the Paris Agreement was a landmark moment in the quest to address the climate crisis, it didn't include details on how the world would achieve its goal. The subsequent COPs have sought to make the plans attached to it more ambitious and to detail courses of action.

"On paper, the Paris Agreement was always designed as a cyclical process — 'see you in five years, with better plans and renewed efforts,'" said Lola Vallejo, the climate program director at the Institute for Sustainable Development and International Relations. "So right now, we are at this deadline, pushed back by Covid." 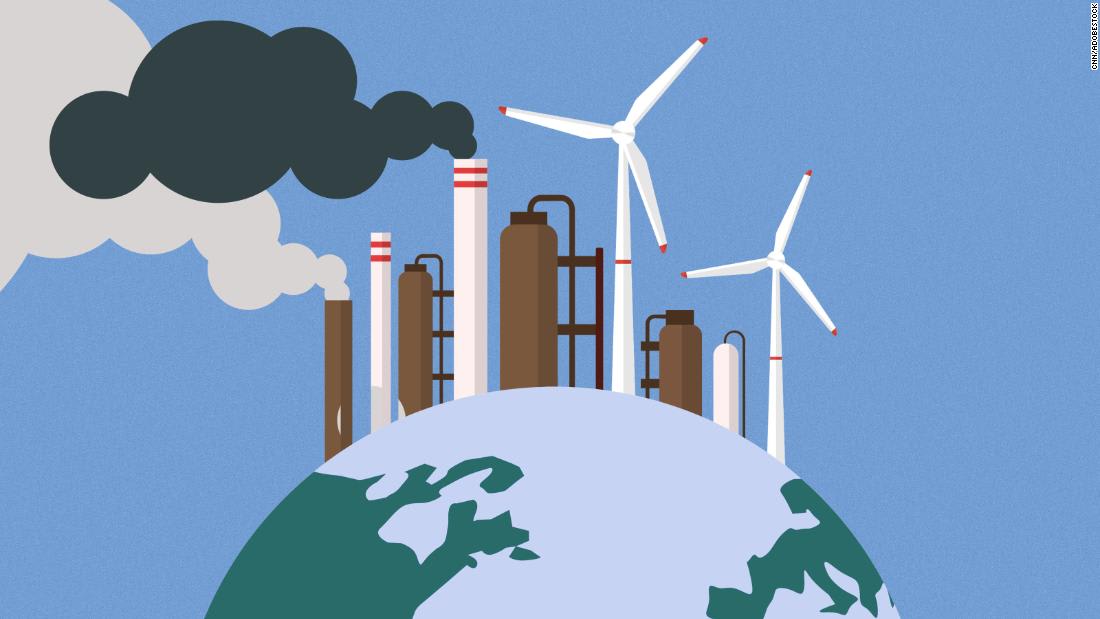 What is COP26? How the pivotal UN conference could avert global climate 'catastrophe'

More than 120 world leaders have been confirmed as attending COP26 in person, on the heels of the G20 summit in Rome.

Queen Elizabeth II was slated to attend, but she is not going for health reasons.

President Biden is planning a show of strength at the pivotal UN climate summit in Glasgow.

CNN reported last month that the President is sending 13 cabinet members and senior administration officials, including his top domestic and international climate advisers Gina McCarthy and John Kerry, according to a schedule obtained by CNN.

Kerry, who is Biden's special presidential envoy for climate and has been engaging in climate diplomacy around the world this past year, will be attending the conference throughout its duration. McCarthy and Biden will attend the beginning of the conference to emphasize what the US is doing to lower its own greenhouse gas emissions and hit Biden's Paris Climate Agreement goal of slashing emissions 50-52% below 2005 levels by 2030.

"In Glasgow, the United States will showcase President Biden's whole-of-government approach to tackling the climate crisis," a White House official told CNN. "They will demonstrate the strength of the entire US government working in lock-step to reduce emissions and achieve our international climate commitments — and that the countries who take decisive action on climate will reap the economic and jobs benefits of the clean energy future."

Barack Obama is attending the big climate conference in Glasgow to try to convince the world that America is more about President Biden than former President Trump.

At least when it comes to fighting climate change. And at least when you judge the country as a whole and not just what's going on in Washington, where the President's climate agenda just took a major cut in Congress.

It's an extremely unusual appearance by a former president at a world leaders event, but Obama aides and friends tell CNN the former President wants to help Biden win back world faith in American leadership on this issue, and get the global alliance back on track after four years of Trump.

Obama "has a global following," said John Podesta, who worked on climate issues in the Obama White House and remains in touch with the former President. "Poll after poll show young people in particular are despairing of whether democracy can work, whether politicians are up to the task. They see Obama as inspirational and who tells it like it is."

Obama's presence at the COP26 summit began with suggestions from climate activists. But it really took shape in conversation with John Kerry, his former secretary of state and Biden's special presidential envoy for climate, people familiar with the conversations tell CNN.

The White House was eager for the help, officials said, requesting anonymity to discuss the behind-the-scenes conversations.

Still, Obama's trip does not just reflect an acknowledgment in the Biden White House and beyond of how much international faith in America declined during the Trump years. It also reflects an awareness of how much more Obama connects with people globally — even now as a former president — than Biden does as the President actually in the Oval Office.

Even when Obama was at his most popular in America, he was always much more popular overseas, with his election seeming symbolic of the world's superpower embracing internationalism and a new, forward-looking generation. Obama remains the inspiring figure around the globe, particularly with the younger people to which he will dedicate much of his time while in Scotland. In coordination with his own foundation and Columbia University's Climate School, he will host a roundtable with youth activists — including many who are alumni of his global fellowship programs — and urge business leaders to accelerate their own clean energy investments.

A State Department official called Obama "among our strongest global advocates for action," adding that he'll be "a welcome voice," in describing the rare tag-team approach for two Presidents.

Read more about Obama's participation at the climate conference here.