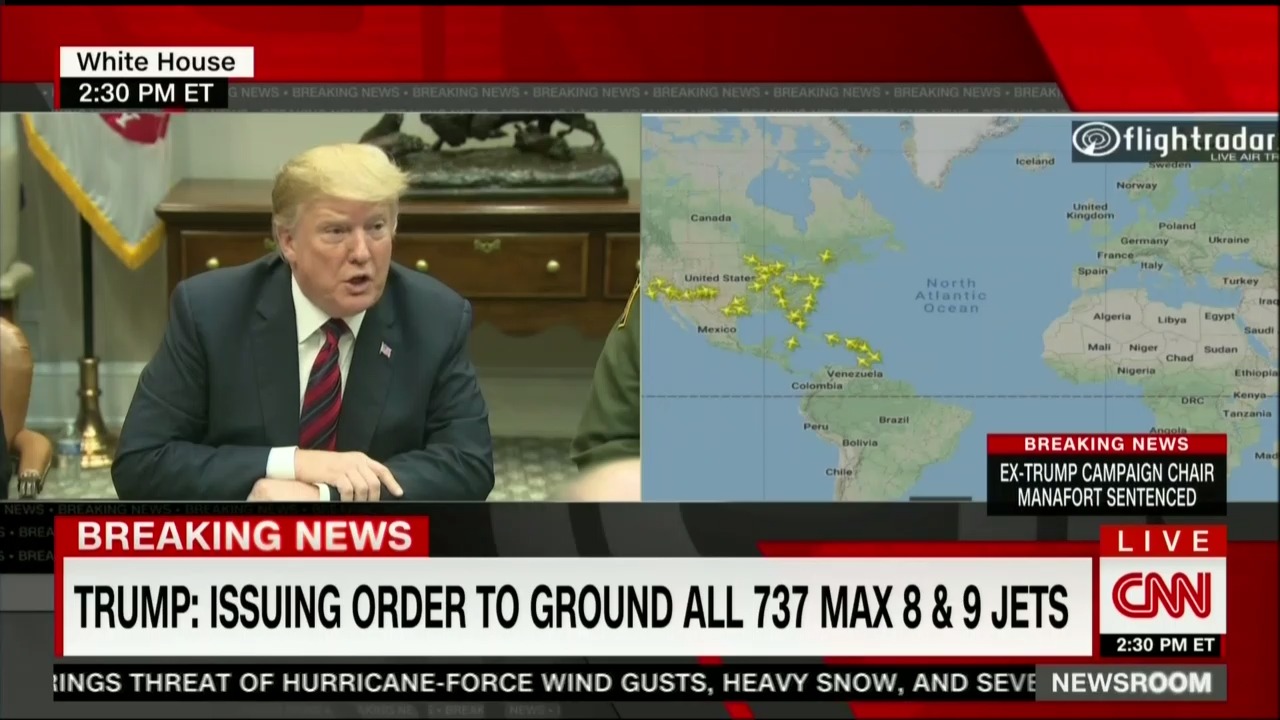 President Trump, speaking Wednesday afternoon at the White House, announced that the US would be issuing an "emergency order to ground all 737 Max 8 and the 737 Max 9, and planes associated with that line."

He added that both the FAA and Boeing were "in agreement with the action," and any planes currently in the air would continue to their destination where they will be grounded.

"Pilots have been notified, airlines have been all notified. Airlines are agreeing with this. The safety of the American people and all people is our paramount concern," the President said.

Air Canada, until this afternoon was one of a few carriers still flying the Boeing 737 Max, said it would follow Transport Canada's safety notice that bans the plane from Canadian airspace and work to rebook its passengers on other available aircraft.

However, due to the size of its operation, customers should expect delays.

"Air Canada's cancellation and rebooking policies are in place with full fee waiver for affected customers. We are working to rebook impacted customers as soon as possible but given the magnitude of our 737 MAX operations which on average carry nine to twelve thousand customers per day, customers can expect delays in rebooking and in reaching Air Canada call centres and we appreciate our customers' patience."

On Twitter, the airline added that anyone currently onboard a 737 Max can expect to continue to their destination.

Despite the actions of other aviation regulators worldwide, the Federal Aviation Administration sees no need to ground the Boeing 737 Max 8 fleet at this point because it believes the aircraft is operating as intended, according to a person familiar with the FAA deliberations.

“All of the data available tells us this airplane is performing to its certifications,” said the person, who spoke on the condition of anonymity to discuss the non-public deliberations.

“We know that the airplane was designed to meet the strongest certification standards in the world, and we know that we have several hundred thousand successful and safe flights in the US ... And we also know what happened in the Lion Air accident, and we know how to avoid that happening again. The big question becomes what happened this time — was it the same thing or was it something different.”

One note: The person spoke before Canadian authorities announced they had reviewed new tracking data and would ground the Max series.

The person's comments clarified and echoed the statement from FAA Acting Administrator Daniel Elwell Tuesday evening. He said the FAA’s “review shows no systemic performance issues and provides no basis to order grounding the aircraft.”

Elsell also said the agency would take “immediate and appropriate action” if it learns new information.

A video animation created from Flightradar24 shows how Boeing Max 8 airplanes were grounded around the world in the wake of the Ethiopian Airlines disaster.

A global grounding of Boeing's 737 Max 8 airliner is drawing new attention to the close ties between the manufacturer and the Trump administration, which so far is refusing calls to join every other country in suspending use of the plane in the United States.

President Donald Trump has touted Boeing sales across the globe -- including two weeks ago in Vietnam -- and has cultivated close relationships with the company's executives. His acting defense secretary served atop the company for more than three decades, including as the newly scrutinized planes were being developed. The company has spent millions over the past years lobbying decision-makers in Washington.

Now, as Boeing faces crumbling public confidence in one of its marquee products, those ties are being viewed in a new light. Even under increasing pressure from airline labor groups and lawmakers to take the planes out of use, the administration maintains the 737 Max 8 model remains safe to fly.

Trump spoke by phone Tuesday with CEO Dennis Muilenburg, who assured him the 737 Max 8 was safe, despite two recent crashes. Hours after the call -- which was scheduled after a crash in Ethiopia killed 157 people -- the Federal Aviation Administration said it remained confident in the planes, even as governments across Europe and Asia grounded them.

"Thus far, our review shows no systematic performance issues and provides no basis to order grounding the aircraft. Nor have other civil aviation authorities provided data to us that would warrant action," the agency said.

Helmed by an acting administrator for more than a year, the FAA finds itself the focus of congressional and public scrutiny for its role in inspecting and ensuring the safety of Boeing airplanes. Some US pilots who fly the Boeing 737 Max registered complaints about the way the jet has performed in flight, according to a federal database accessed by CNN.

Canada Minister of Transport Marc Garneau just announced that as the result of new data that they received this morning, they will no longer allow Boeing 737 Max 8 or 9 aircraft to take off and land or fly over Canadian airspace.

Flightradar24 tweeted a map showing at least six aircraft currently flying in Canada at the moment:

Iraq’s Civil Aviation Authority has banned Boeing 737 Max aircraft from entering the country’s airspace until further notice, due to technical and international restrictions using this type of aircraft.

Here's the statement from the agency:

“The Iraqi Civil Aviation Authority decided on Wednesday to stop granting approval for the passage of 737 MAX aircraft in Iraqi airspace because of technical and international restrictions using this type of aircraft. This decision came under the guidance of the Department of Aviation Safety in the Iraqi Civil Aviation Authority to ensure the safe use of this type of aircraft to maintain safety procedures in Iraqi airspace,"

A software fix for the flight control system in the 737 Max aircraft was delayed, in part, by the 35-day federal government shutdown that began December 22, 2018 and lasted until January 25, 2019, the Wall Street Journal reported.

A software fix to the MCAS flight-control feature by the FAA and Boeing had been expected in early January, but discussions between regulators and the plane maker dragged on, partly over differences of opinion about technical and engineering issues, according to people familiar with the details. Officials from various parts of Boeing and the FAA had differing views about how extensive the fix should be. U.S. officials have said the federal government’s recent shutdown also halted work on the fix for five weeks.

CNN reached out to Boeing and the company is declining to comment.

The “black box” data recorders recovered from Ethiopian Airlines Flight 302 will “definitely be going to Europe”, though they haven’t decided which country yet, says airline spokesman Asrat Begashaw to CNN.

A decision on exactly where the “black box” will go is expected Wednesday night or Thursday, Begashaw added.

When pressed about which “black box” or if he meant both black-box recorders, the Ethiopia Airlines spokesman did not differentiate between the two. Both the Digital Flight Data Recorder (DFDR) and the Cockpit Voice Recovered (CVR) were recovered at the start of the week, the airlines said in a statement issued Monday.

Ethiopian Airlines CEO Tewolde GebreMariam told CNN’s Richard Quest on Tuesday that Ethiopia's Ministry of Transport would work with the United States, where Boeing is based, to find a place outside the country to examine the black-box data. Ethiopia does not have the necessary equipment to perform those tasks on its own, GebreMariam added.

The nature of the black-box recorders cannot be overstated, says CNN’s Richard Quest. "The single most impart part of the investigation at the moment is the black boxes, because they have the answer to what happened."

Quest also highlights that Ethiopian Airlines have not yet spoken out about the condition of the black boxes.