Our live coverage has ended for the day. Catch up with the latest Olympics news here.

The alpine mixed team parallel event has been postponed due to poor weather conditions.

"Due to the continuing wind gust and the updated forecast — the Jury together with the the organiser are unable to stage the Mixed Team Parallel Event today. Additional information will follow," said a statement from the International Ski Federation on Saturday.

Strong winds have impacted other events, with several freeskiers commenting on the difficult conditions at the men's halfpipe final today.

No new Covid-19 cases were reported inside the Beijing Winter Olympics "closed loop" today, as the Games enters its final weekend.

Since Jan. 23, Games organizers have detected 436 Olympics-related cases inside the bubble. In that same period, more than 1.7 million tests have been conducted in the bubble.

Sunday is the last day of the Beijing 2022 Games

It's a freezing cold day at the Genting Snow Park in Zhangjiakou, with strong wind gusts hampering the freeskiers' ability to throw their usual tricks high in the air as many of the top competitors crashed on their runs. The temperature with wind chill has dropped below -30 degrees Celsius, according to the official Olympics site.

Team USA's Aaron Blunck, who qualified in top spot, fell hard on his last run, laying at the valley of the halfpipe for a long time as medics skied down to him. His teammate Wise, watching from the bottom, sprinted up the slope in his ski boots to check on Blunck — who eventually got back up.

Great Britain's Gus Kenworthy also had a nasty fall, landing right on the edge of the halfpipe in his way down from a jump on the second run. He managed to finish his third run without incident, though placed far from the podium.

Kremlin spokesperson Dmitry Peskov pushed back at comments made by IOC president Thomas Bach on Friday about 15-year-old Russian figure skater Kamila Valieva, who placed fourth in the women's individual event and was in tears as she left the ice.

After Valieva's disastrous freeskate on Thursday, Bach said he had been "very disturbed" watching her performance and the "tremendous coldness" from her entourage afterward, including her coach.

Peskov responded in a news briefing, saying "we respect his point of view, but we don't necessarily agree with him."

Peskov added that although Bach didn’t like seeing the “tough” tactics at play, “everybody knows that in the sport of great achievements, the toughness of a trainer is the key to victory.”

“We can see the athletes achieved these victories. And trainers. So let's be proud of our victors," he added.

Valieva has been at the center of a doping controversy after it emerged during the Games that a sample she submitted in December tested positive for a banned substance. She was ultimately allowed to continue competing, though investigations into any doping violations by Valieva and the adults responsible for her training continue.

Great Britain's Gus Kenworthy had a bumpy start to the men's freeski halfpipe final, landing several tricks before falling on his first and second runs.

On his second run, he landed right on the edge of the halfpipe on his way down from the first trick — a painful landing that threw off one of his skis.

He has one more shot — the competitors each get three runs, with the best score taken as their final result.

The skiers are facing strong winds today, with several commenting on the difficult conditions after their runs.

This is Kenworthy's final Winter Olympics. The two-time US Olympian won silver in slopestyle at the 2014 Sochi Games before switching sporting allegiances to compete for Great Britain in Beijing.

Bach's remarks came after Yan Jiarong, a spokeswoman for the Beijing Organizing Committee for the Olympic Games (BOCOG), spoke about Taiwan and Xinjiang at a Thursday news conference.

"This problem we did not ignore," Bach said. "We were in touch with BOCOG immediately after this press conference and both organizations, BOCOG and the IOC, have restated the unequivocal commitment to remain politically neutral as it is required by the Olympic charter."

Comments on Taiwan: On Thursday, when the IOC spokesperson was asked whether the Taiwan delegation would attend the closing ceremony, Yan said “there is only one China in the world, and Taiwan is an indivisible part of China.”

“The IOC has 206 members, including members of nations such as the People’s Republic of China and members of regions such as Taiwan,” Yan said — then quickly corrected herself to “China Taipei,” before finally correcting it to “Chinese Taipei,” the official name for the Taiwan team at the Olympics.

Xinjiang allegations: Yan also jumped in after the IOC spokesperson answered CNN’s question about whether the Olympic uniforms were made by forced labor in China’s western Xinjiang region, saying the allegation is “a lie made up by forces with ulterior motives, and the relevant organizations have provided large amounts of facts to dispute that.”

Beijing has long denied claims of rights abuses and genocide in Xinjiang, claiming its policies are part of a program of mass deradicalization and poverty alleviation.

Olympic neutrality: Yan’s comments seemed to have violated Rule 50 of the Olympic charter, which prohibits any kind of “demonstration or political, religious or racial propaganda.”

The organizing committee, BOCOG, did not respond to CNN’s request for comment on this matter.

The penultimate day of the Winter Olympics brings a packed schedule — and for some athletes, a last chance to medal. Here are the names and events to look out for on Saturday:

⛷️ One more shot: Team USA's Mikaela Shiffrin will compete for the sixth and final time at these Games at the alpine skiing mixed team event today. Shiffrin, a two-time Olympic gold medalist, has had a difficult run these past two weeks, crashing out of three events. She finished two others, but placed ninth and 18th, far from the podium. “Why do I keep coming back? Gosh knows it hurts more than it feels good lately,” Shiffrin tweeted Thursday after failing to finish the combined event, calling out some of the online abuse she has received.

🛷 Last race before closing ceremony: Four-time Olympic bobsledder Elana Meyers Taylor from the US will compete in the two-woman bobsleigh, hoping to score a gold before attending the closing ceremony tomorrow as a flag bearer. She had originally been elected as a flag bearer for the opening ceremony, but was forced to miss it after testing positive for Covid. After the first two heats for the race today, Meyers Taylor is in third, with Germany's Laura Nolte and Mariama Jamanka taking first and second.

⛸️ Chinese stars on ice: The final figure skating competition will be the pairs free skate today, with China's Sui Wenjing and Han Cong looking to score another victory. The event combines the scores of the free skate with the short program — and the pair are already top of the leaderboard with a score of 84.41 following a short program that has been described as "the greatest ever," eclipsing their previous world record, set less than two weeks ago.

🥌 Reigning champions defend title: Sweden and Great Britain are facing off for gold in the men's curling final today. Three-time defending world champion Sweden got off to a 7-0 start at these Olympics and was the first team to qualify for the semifinals — but lost their final two games in the round-robin play. Meanwhile, Great Britain hasn't been in the gold medal game since 2014.

⛸️ Start your engines (or skates): Speed skating concludes today with the mass start events for both men and women, meaning two semifinals of 15 skaters in each discipline, with eight athletes from each skate advancing to the finals. This mass start is unusual — and has been described as "NASCAR on ice." USA's Joey Mantia is the reigning men's world champion, but is still searching for his first individual medal. In the women's event, Japan's Nana Takagi is looking for redemption after losing out on gold in the team event, and Dutch skater Irene Schouten could score a medal in all four of her events.

Teenage figure skater Kamila Valieva has become one of the faces of Beijing 2022, but as the Winter Olympics nears its conclusion the spotlight is likely to remain on the 15-year-old and her entourage for the foreseeable future.

A blame game has already broken out between the Court of Arbitration for Sport (CAS) and the World Anti-Doping Agency (WADA) over the drugs test controversy surrounding Valieva, who completed her competition run at the Winter Olympics on Thursday.

The 15-year-old finished in fourth place in the women's individual figure skating event, leaving the ice in tears after falling and faltering during jumps in her routine, despite having previously been the favorite to take gold.

Before being cleared to take part in the women's individual figure skating competition, Valieva was suspended by the Russian Anti-Doping Agency (RUSADA) on Feb. 8, although the body lifted her suspension the next day following a hearing.

However, CAS cleared Valieva for competition, saying she would suffer "irreparable harm" if not allowed to compete, citing the "exceptional circumstances" of her being a minor.

Given the pressures she was facing, many commentators have questioned why she was cleared to skate, with former US Olympic figure skater Polina Edmunds saying it was "devastating that she was put in this situation."

CAS published a 41-page document on Thursday outlining its reasons for allowing Valieva to compete, notably blaming WADA for the way events had unfolded in the teenager's case.

"It is unfortunate that this episode occurred to mar this Athlete's, and other Athletes', Olympic Winter Games experience," said CAS.
"This has been the result of the relevant anti-doping bodies to ensure timely analysis of pre-Games samples, and failing to ensure that pending cases are resolved before the Olympic Winter Games commence." 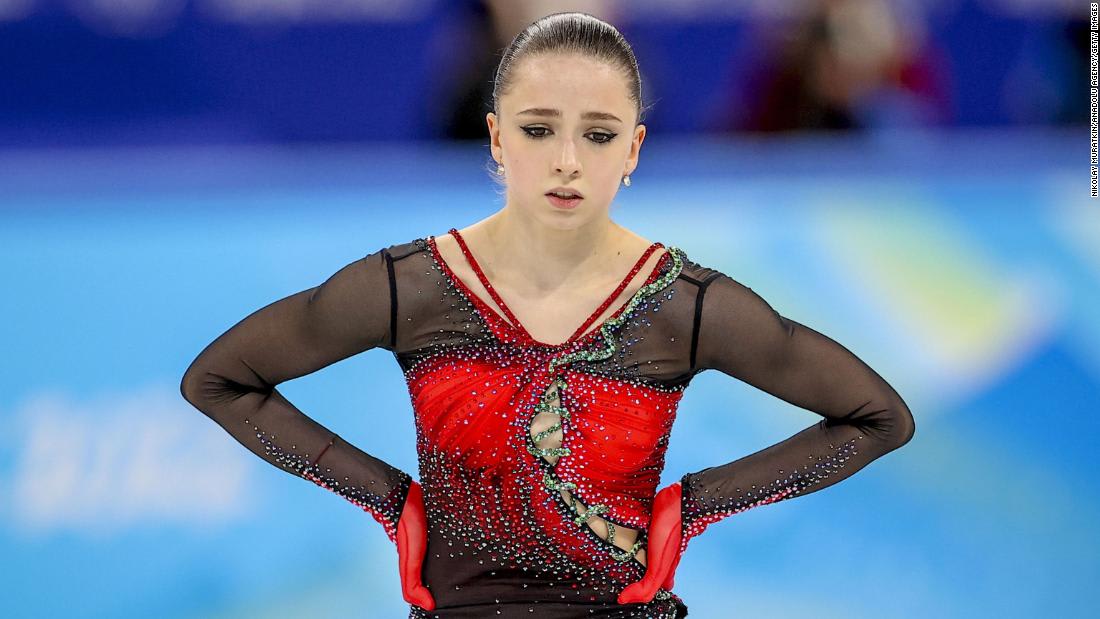 As the 2022 Winter Olympics nears its conclusion, there's been no shortage of exhilarating moments and compelling storylines.

Here's a recap of the biggest Olympic moments that happened on Friday:

⛷ Home favorite makes history: China's Eileen Gu has had a historic Olympic run, cementing her status as the face of her team's sporting dreams at the 2022 Beijing Winter Games. The American-born teen took gold in the women's freeski halfpipe on Friday, adding to a medal haul that had already included a gold in last week's big air event and a silver in Tuesday's freeski slopestyle event. Gu — whose face is plastered across China on billboards and magazine covers — is now the first athlete to capture three medals in three separate freestyle skiing events at a single Olympics. After her performance on Friday, Gu spoke to the confidence that helped propel her to skiing stardom, revealing, ""At the top I said, 'My name is Eileen Gu, and I'm the best halfpipe freeskier in the world.'"

🇺🇸 Bobsledder to carry US flag: American bobsledder Elana Meyers Taylor will get the chance to carry the stars and stripes at Sunday's closing ceremony. The four-time Olympian had been tapped as a flag bearer for the opening ceremony but was forced to miss as she quarantined following a positive Covid-19 test.

🥇 Norway's Winter Games dominance: Norwegian Johannes Thingnes Bø has captured his fourth gold medal in Beijing, and fifth medal overall. This helps Norway set a Winter Games record with 15 total gold medals. The 28-year-old won Friday's men's biathlon 15km mass start by more than 40 seconds, and had previously earned gold in the sprint, relay, and mixed relay biathlon events, as well as the bronze in the individual.

🥅 ROC advances to gold medal match: The Russian Olympic Committee (ROC) moves on to the gold medal game in men's hockey, skating past Sweden 2-1 in the 8th round of a penalty shootout. The ROC will take on Finland in Sunday's gold medal match.