There were eight gold medals at stake on Wednesday at the 2022 Beijing Winter Olympics. Here's a recap of who won and where the medal count stands.

Here's where the official Olympics medal count stands so far.

Despite settling for a silver medal in the men's slalom, the Beijing 2022 Games have been nothing short of a fairytale for Austrian skier Johannes Strolz.

Just seven months ago, the 29-year-old was dropped by the Austrian ski team and had been working in the police force. Now he's a two-time Olympic medalist.

"It was really good today. The first run was very good, I found the limit. Some minor mistakes but all in all a very good run" Sholtz said after the slalom.
"I have to talk to coaches of the Austrian ski team and we have to make a good plan for the upcoming season and then I will see how much time is left for some police work," he added, jokingly.

Last Thursday, Strolz overcome the odds to win gold in the Alpine combined race, emulating his father's success in 1988.

You can read the full report below. 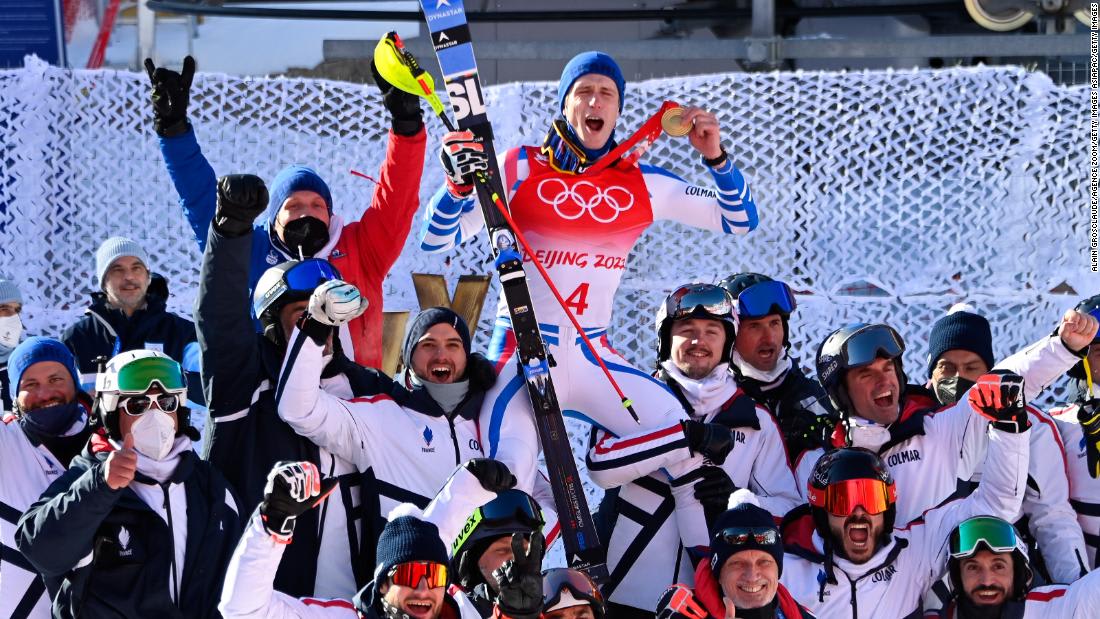 Kamila Valieva, the teenage Russian figure skater at the center of a doping controversy roiling the Beijing Olympics, had three substances that can be used to aid the heart in her testing sample, according to a report in the New York Times, which cited an exhibit filed in a Sunday hearing by the Court of Arbitration for Sport (CAS).

Two of those substances, Hypoxen and the supplement L-carnitine, are not banned by the World Anti-Doping Agency (WADA), which regulates the use of drugs in international sport.

Valieva declared both of these on a doping control form, according to a court application allegedly filed by WADA in a case raised after it came to light that Valieva tested positive for a banned substance in December.

The London-based Dossier Center, an investigative website run by an exiled Russian businessman, published part of the WADA court application online and it was reviewed for CNN by Travis Tygart, head of the United States Anti-Doping Agency (USADA).

"It raises a whole host of questions that have yet to be determined and what appears to be the case of a pretty deliberate attempt to use substances in order to enhance performance," Tygart said.

An emotional Valieva came out at the top after the short program of the women's singles competition on Tuesday. She will compete in the second portion of the event — where she is the favorite for gold — on Thursday.

You can read the full report below. 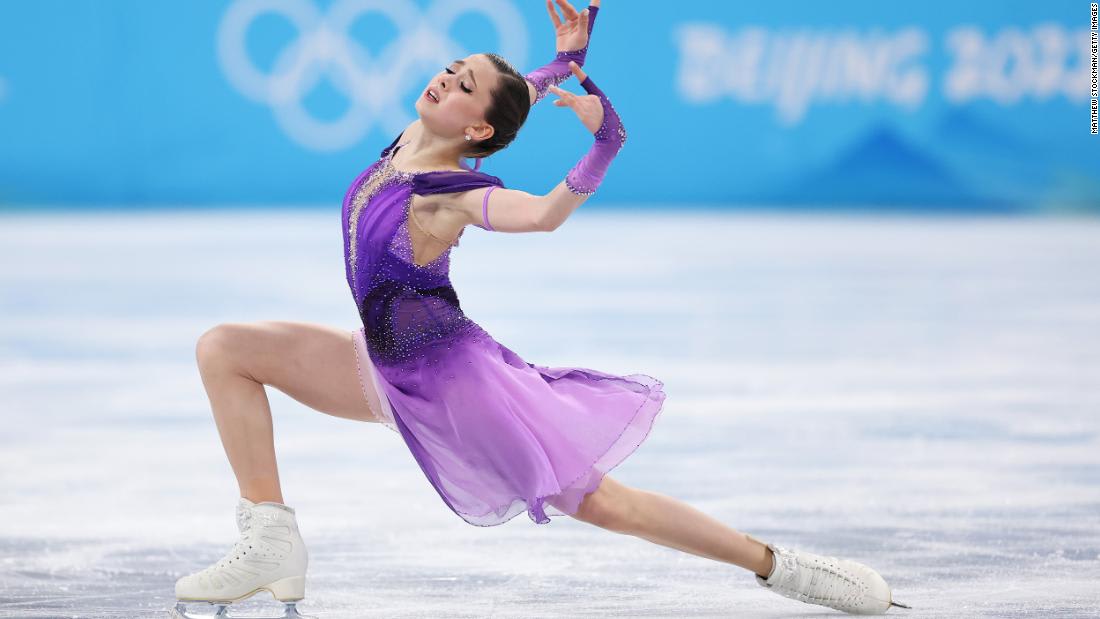 Gus Kenworthy's story is one of bravery and courage.

The skier is competing at his third and final Olympic Games, this time for Team Great Britain, after switching allegiances from Team USA after Pyeongchang in 2018.

However, besides being a skiing sensation — and also part-time actor — Kenworthy has blossomed into an activist for the LGBT community.

A kiss between Kenworthy and his then-boyfriend Matthew Wilkas during the 2018 Winter Olympics was captured by TV cameras and used to signify changing attitudes.

When asked by CNN's Coy Wire about what he wants to be remembered for, Kenworthy pointed to his sexuality and possible position as a role model, saying, "My coming out story is my legacy."

"There's some importance to that because there's been such a lack of representation that it's nice to have that now," he said ahead of the men’s freeski halfpipe event which begins on Thursday, Feb. 17 at Genting Snow Park. "And I am proud to continue to share that part of myself and hopefully be someone that someone younger than me could look up to or someone struggling with their own sense of identity could maybe emulate."
He added, "And I feel like I look back and the ski awards and the podiums and the accolades are all great, but if anything, they just kind of mean something to me and getting to be out and getting to go to the Olympics as an out, gay man, I feel like is something bigger than that and that is more important to me."

Sweden beat reigning world champion Canada 2-0 in a hard-fought match to book its place in the men's ice hockey semifinals.

A Canadian error allowed Lucas Wallmark to finally get the breakthrough with just eight minutes of the match remaining, before Anton Lander sealed the win with a goal into an open net after Canada had pulled its goalkeeper for an extra outfield player as it went in search of an equalizer.

Sweden will now play the Russian Olympic Committee in the semifinal as it goes in search of a first Winter Olympic gold medal since Turin 2006.

Slovakia, who earlier stunned the USA, will face Finland in the other semifinal.

After their podium finish at the men's 5000m relay final, winners from Canada, South Korea and Italy take a group selfie with their pandas after the flower ceremony at the Beijing 2022 Winter Olympic Games at Capital Indoor Stadium.

The Beijing Olympic mascot is a playful panda wearing an icy shell. It had been a crowd favorite at the Winter Games — until it started talking.

Team USA was stunned by Slovakia 3-2 in the men's ice hockey quarterfinals at Beijing 2022 on Wednesday.

Slovakia, bidding for its first Olympic medal in the event, advanced to the last four after winning a nail-biting shootout in a dramatic conclusion to the game.

With the game tied 2-2 after overtime, Peter Cehlarik was the only man to convert his effort as Slovakia goalie Patrik Rybar stopped all five of Team USA's shots.

Though the US will be frustrated that they weren't able to see the game out, they remained proud of what the young team achieved — many of the athletes representing the US are still playing college ice hockey.

"Hockey is a game of inches," said Team USA's Steven Kampfer. "They (Slovakia) played well, they stuck to their identity, and when it comes to a shootout there isn't really that much you can do."

"We did a pretty good job at understanding the moment in the room. We played the game five minutes at a time, going whistle to whistle," he added. "These guys will have a great future ahead of them and they'll be back here representing the USA before you know it. But this one's going to sting for a little bit for all of us."

It came down to the wire, but in the end, South Korea's Choi Min-jeong held off her closest rivals to win gold in the women's 1500m speed skating final.

The defending champion — who had set a new Olympic record in the discipline in a semifinal earlier in the day — finished just milliseconds ahead of Italy's Arianna Fontana and the Netherlands' Suzanne Schulting.

Finishing with a time of 2:17.81, Choi won her third medal of Beijing 2022 and her third gold medal of her Olympic career.

It required a photo finish to separate Fontana and Schulting, but Fontana just about held on to silver, the 31-year-old's 11th Olympic medal.

For Schulting, her bronze medal was the end of her quest for the women's speed skating gold medal hat-trick, after gold's in the women's 1000m and the women's 3000m relay.

The 37-year-old, who is competing at his fifth Winter Games, said in the build up to these Olympics that he plans to retire after Beijing 2022.

Alongside Hamelin were Jordan Pierre-Gilles, Steven Dubois and Pascal Dion, who held off South Korea in second place.

There was a photo finish for bronze, with Italy pipping the Russian Olympic Committee on the line.