American racers dominated the medal spots in the first ever monobob at an Olympics on Monday.

Monobob's Olympic debut: The event's inclusion is a victory for gender equality at the Olympics and comes after a long campaign for women to have the additional race.

It's an individual version of bobsleigh exclusive to female athletes. The bobsledders have to push, drive and brake the sled, which weighs at least 162 kilograms (more than 357 pounds) by themselves.

The monobob joins the pre-existing traditional bobsled events: four-man, two-man, and two-woman — and gives women two medal opportunities, bringing them even with men.

The Beijing Olympic Committee identified three new Covid-19 cases among Games-related personnel on Sunday, it said in a statement Monday.

All three cases were found among airport arrivals, while no one tested positive for Covid-19 inside the “closed loop” system, which separates Olympic athletes, stakeholders, and staff from the public.

Of the three cases, one involved an athlete or team official.

Since the official closed loop system began on Jan. 23, 432 Covid-19 cases have been found among Olympics-related personnel.

Of those cases, 183 involved athletes and team officials.

Those inside the Beijing Olympic bubble must contend with daily mandatory Covid-19 tests — usually the most unpleasant part of the day.

But on Monday, those who showed up to one testing center were greeted by vials arranged in the pattern of a heart and "Happy Valentine's Day."

It was a cheery way to break up the monotony and difficulties of living in the "closed loop" bubble, which has been challenging for everyone, including Olympic volunteers and staff.

The demands of the bubble: The "closed loop" separates Olympic athletes, support staff, media and volunteers from the rest of the Beijing public — but the stringent requirements are exacting, with an especially high cost for Chinese volunteers.

The first batch of volunteers, including health care workers, drivers, cleaners and chefs, entered the bubble on Jan. 3 — and they're all required to stay until the Games end on Feb. 20. Once they leave the bubble, they must then undergo 21 days of strict quarantine at a designated facility.

Several sporting couples are spending Valentine's Day in the Olympic bubble together. Here are some of Beijing 2022's power couples:

Mascot Bing Dwen Dwen is everywhere at the Winter Olympics, with fans queuing for hours to get their hands on coveted pins bearing the cuddly panda's likeness or sold out replica stuffed toys.

Outside the Olympic bubble, love for the round-bodied panda has gotten several Chinese bakeries into trouble.

A market watchdog in the city of Nantong, eastern China, got a tip off that one bakery was selling Bing Dwen Dwen cakes for 200 yuan ($31) each. The shop is under investigation for using the Olympic symbol without authorization, the Global Times said.

And in Ningbo, another dessert shop was ordered to suspend sales of similar Bing Dwen Dwen cakes and placed under investigation.

No one can use the Olympic symbols for commercial purposes without the permission of the right owners, Global Times reported.

The second half of the women's monobob competition is underway, with Team USA's Kaillie Humphries in the lead, followed by Canada's Christine de Bruin and fellow American Elana Meyers Taylor.

It's the first time the event has appeared at an Olympic Games, but what exactly is the monobob?

As the name suggests, this event features a single, female participant tasked with quickly navigating a sled down the windy, icy track.

It's an individual version of bobsleigh exclusive to female athletes. The bobsledders have to push, drive and brake the sled, which weighs at least 162 kilograms (more than 357 pounds) by themselves.

The event joins the pre-existing traditional bobsled events: four-man, two-man, and two-woman. As such, the Beijing Games mark the first time female bobsledders have had two medal opportunities, bringing them even with men.

In the women's monobob event, each competitor's sled is identical, removing any potential design advantages.

We're on Day 10 of the Winter Olympics, with postponed events due to heavy snow rescheduled for Monday. Meanwhile, a decision is expected in the coming hours on whether Russian teen figure skater Kamila Valieva will be allowed to compete following a failed drug test.

Here's what to watch today:

Heading into the second week of the Beijing Winter Olympics, here's where the teams rank in the medal standings:

US speed skater Erin Jackson won the women's 500m gold medal at the Winter Olympics in a time of 37.04 on Sunday.

Jackson almost missed competing in the 500m at the Olympics after she had slipped during qualifying trials, but her teammate and friend Brittany Bowe gave up her own spot to ensure the world No. 1 was able to go to Beijing — and it paid off.

"I cried immediately, it was just a big release of emotion. A lot of shock, a lot of relief and a lot of happiness. I haven't fully processed everything quite yet, but it just feels amazing," Jackson told reporters.
She added: "I had a little misstep on the backstretch, but I just tried to, I wouldn't say recover, because it wasn't anything big, but just tried to continue skating." 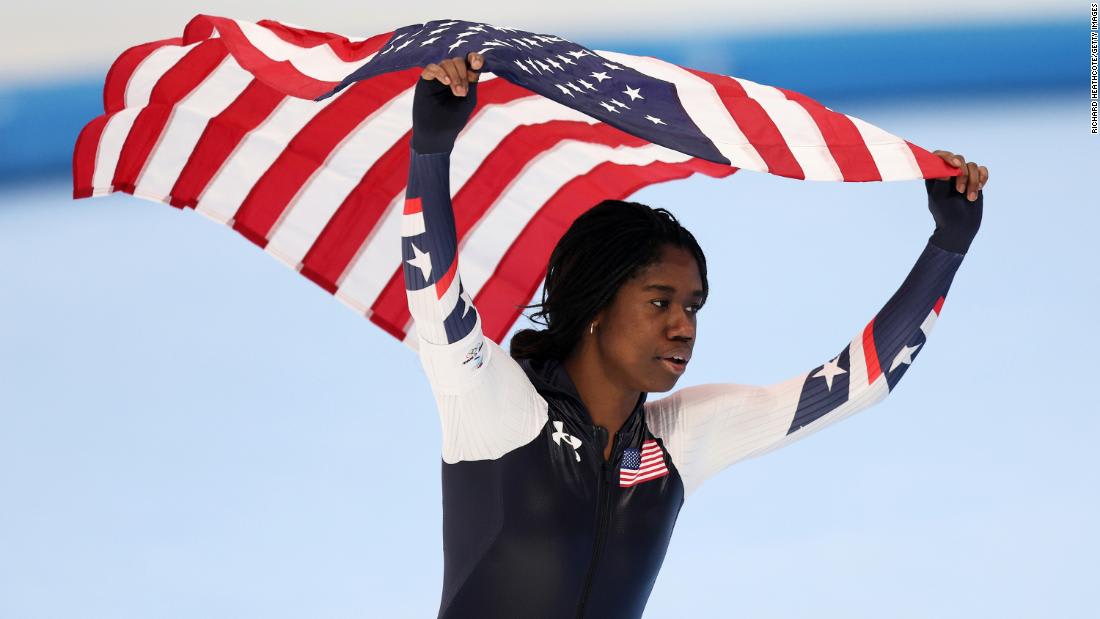