Day 6 of the 2022 Beijing Winter Olympics

US snowboarding star Chloe Kim just had her first of three runs at the halfpipe final — and nailed every trick to post a huge score of 94.

She performed a frontside 10 and a cab 10 — placing her solidly in the lead.

After the successful run, she shouted with joy and fell to her knees at the bottom of the half pipe, a wide grin on her face. "Oh my god," she said, a hand over her mouth as she caught her breath.

Japanese skating legend Yuzuru Hanyu has made it his goal to attempt the fabled quadruple axel during his Beijing Olympics appearance.

The 27-year-old "Ice Prince" goes into the free skate on Thursday aiming to redeem his sub-par performance Tuesday, when he placed eighth in the short program to trail rival Nathan Chen — who led the field with a world record score.

The scores of the free skate and short program are combined to determine the medal winners.

The quadruple axel has never been completed in competition before, let alone at the Olympics.

But what exactly is the jump everyone is talking about? The quadruple axel involves four-and-a-half rotations in the air.

An axel is the most challenging of figure skating jumps "because it is the only jump in the sport in which skaters take off facing forward," according to the Olympics website.
"It’s also the easiest for fans to spot at home: If the skater is facing forward when he or she takes off for the jump, kicking their free leg into the air to spring into it, it’s an Axel."

Can Hanyu do it? The Japanese star will open the program with the quadruple axel — even though he hasn't even been able to land it in practice, according to the Olympics site.

But he has also won praise for committing to such a difficult move in the face of such high stakes.

It’s Day 6 of the Beijing Winter Olympics — another jam-packed day with some big names competing for gold. Here’s what’s to watch for:

⛸️Rivals on the ice: American figure skater Nathan Chen has a clear path to victory in the men's single skating. Chen performed superbly in the short program on Tuesday, drawing ahead of his rival, Japan's Yuzuru Hanyu, who's down in eighth after an error in his routine. Hanyu needs something special — will he land an unprecedented quadruple axel?

🏂Chloe Kim snowboards for gold: The 21-year-old American topped qualifying and is now heading to the finals as the favorite for gold on the halfpipe. Kim fell on her second run in qualifying — but her score was still enough to carry her through.

🏒China and US face off: The hosts plays the United States in preliminary rounds of the men's ice hockey on Thursday night in Beijing. Team USA has been weakened by the absence of all NHL players from the Games due to Covid concerns. In another twist, the hosts have the benefit of a team whose core have played together on a China-owned team in Russia's Kontinental Hockey League (KHL) — including a number of foreign-born players, with many hailing from Canada and the US.

We're six days into the Beijing Winter Games, and European nations are pulling ahead in the gold medal count.

Germany is currently leading the ranks with five golds, followed by Norway (4), Sweden (4) and the Netherlands (3).

Hosts China — not a traditional Winter Sports powerhouse — are currently in fifth place with three golds and five medals in total.

The United States ranks 10th, with just one gold medal so far.

Following a second straight race in which she crashed out of contention, American skier Mikaela Shiffrin took to social media to thank fellow Olympian and boyfriend, Aleksander Aamodt Kilde.

“My hope for every human is that they find another human who finds a way to love, understand, and heal them in the way @AleksanderKilde has done and continues to for me,” Shiffrin wrote on Twitter.

“When you look at this picture you can make up so many statements, meanings and thoughts.” Kilde wrote. “Most of you probably look at it saying: “She has lost it, “she can’t handle the pressure” or “what happened?”… Which makes me frustrated, because all I see is a top athlete doing what a top athlete does! It’s a part of the game and it happens. The pressure we all put on individuals in the sports are enormous, so let’s give the same amount of support back.. It’s all about the balance and we are just normal human beings!! I love you Kaela”

Kilde's gold hopes slip out of reach: Not long after Shiffrin crashed out, Kilde landed fifth place in the men's downhill, though he won a bronze in the men's super-G on Tuesday.

Kilde is currently the world's No. 1 men's downhill skier and had been favorite to take gold coming into Beijing 2022, but he admitted "some mistakes" had cost him.

For more than 50 years, athletes competing in the Olympic games have often been cheered on by either a furry, feathered or slimy friend. The Olympic mascot — a cartoonish encapsulation of the host city's culture and history — is so important, designs are often selected and finalized years before the Games take place.

According to the International Olympic Committee, the role of these quirky caricatures is to help spread a "festive atmosphere" and embody the exuberant spirit of the event.

Over the decades, the world has welcomed snowmen, sasquatches, cowboy-hat-wearing bears and aliens to the Olympic stage.

The first mascot was created in 1968 by designer Aline Lafargue for the Grenoble Winter Games in France.

Affectionately named "Shuss," the character consists of a two-toned head and lightning-bolt shaped leg attached to skis. Despite holding the esteemed title of first ever mascot, Lafargue created and submitted her design for Shuss in just one night. 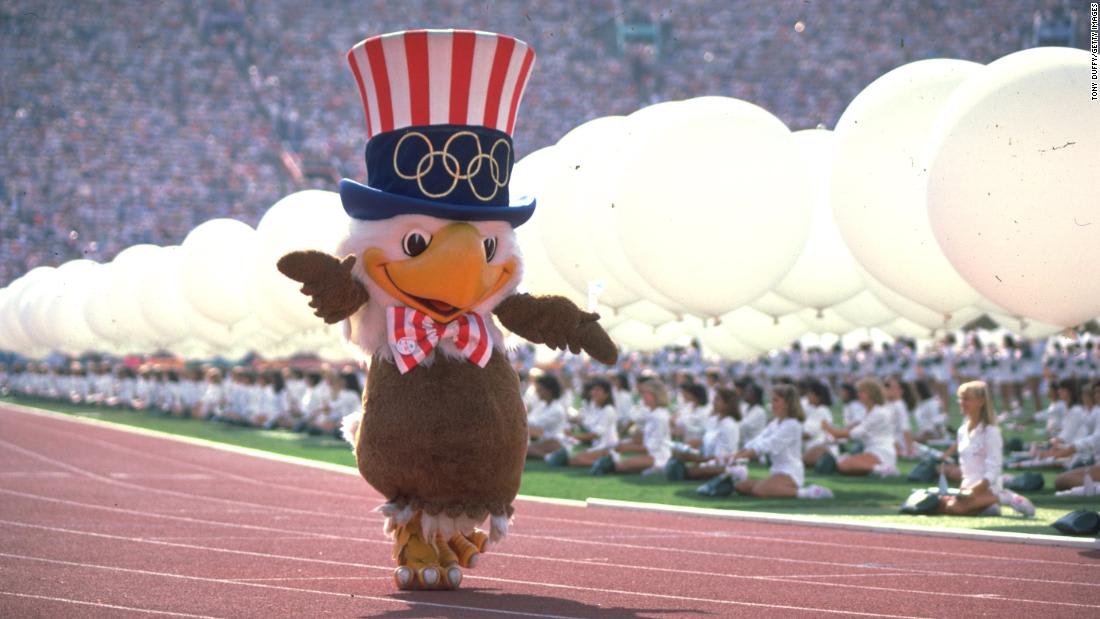 Fun or frightening? A brief history of Olympic mascot design

After near misses at previous Games, the 36-year-old finally topped the podium at her fifth Winter Olympics.

"This feels incredible because this level that all the women are riding at is a lot higher than it was 16 years ago," Jacobellis told reporters.
"So I felt like I was a winner just that I made it into finals, because that's been a challenge every time.
"All these ladies out here have the potential to win and today it just worked out for me that my starts were good, that my gliding was great, and everything just worked for me today."

Jacobellis infamously won silver in Turin at the 2006 Winter Olympics.

The American, who was 20 at the time, looked set to win gold in snowboard cross' Olympic debut after racing into a huge lead with the finish line in sight.

But with victory seeming inevitable, Jacobellis appeared to showboat on the penultimate jump by grabbing her board.

The result was catastrophic. She fell to the ground and watched on in horror as Switzerland's Tanja Frieden sped past to win gold and leave Jacobellis in second.

Despite the disastrous outcome in 2006, Jacobellis said after becoming an Olympic gold medalist that she doesn't feel a sense of redemption.

"I never thought of it that way. That was not in my mind. I wanted to just come here and compete.
"It would have been a nice, sweet thing, but I think if I had tried to spend (time on) the thought of redemption, then it's taking away focus on the task at hand, and that's not why I race." 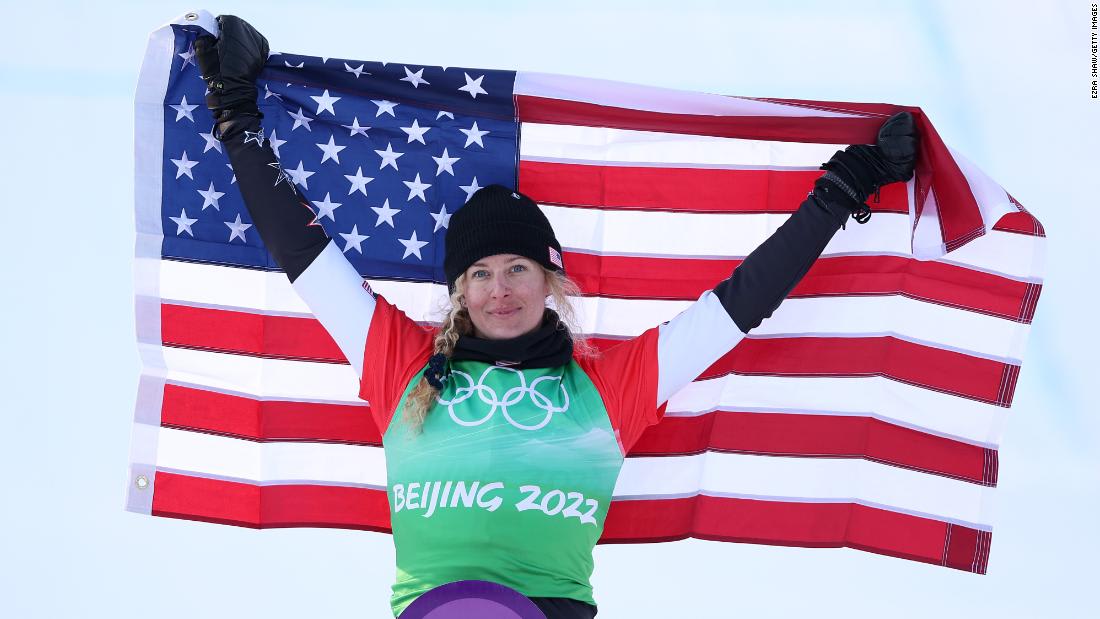 Mikaela Shiffrin sat at the side of the slope, her arms on her knees and her head bowed.

The American, who is so accustomed to success as one of the greatest to ever put on a pair of skis, has now suffered two bitter disappointments in the space of three days in Beijing.

Just two days after she crashed out of her first run in Monday's giant slalom, Shiffrin also failed to make it past five gates in Wednesday's slalom after skiing off line just seconds into her opening attempt.

"It's probably a culmination of the other day and today," she replied when asked what she thinking while sat at the side of the course. "It feels like a really big let down.
"I was trying to look back and think about the last days and what I've been trying to do, what I've been doing with my skiing that would suggest that on the fifth gate I would push myself a little bit too hard to actually be able to stay in the course.
"[But] my skiing has been really solid. My entire career has taught me to trust in my skiing if it's good skiing, and that's all that I have to rely on on these race days.
"And when the pressure is high — and of course the pressure is high, but that didn't feel like the biggest issue today — and there are some nerves and the feeling that I want to do well, I always just go back to that fundamental idea that good skiing will be there for me.
"It's not the end of the world and it's so stupid to care this much, but I feel I have to question a lot now."

Shiffrin had come into these Games with high hopes of making history as the first US alpine skier to win three medals at a single Winter Olympics. Those hopes are now appear to be all but over. 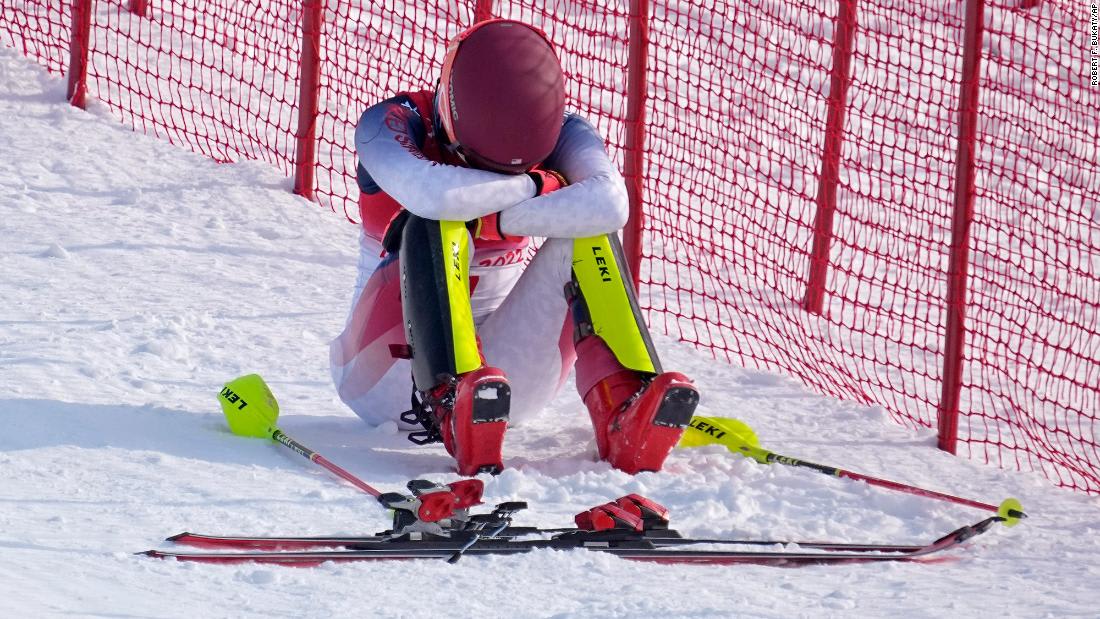 'A really big let down': Mikaela Shiffrin crashes out for the second time at Beijing 2022

Skaters have not yet received their medals in the figure skating team event at Beijing 2022 after one athlete on the Russian Olympic Committee (ROC) tested positive for a prohibited substance, Russian newspaper RBC and CNN Sports analyst Christine Brennan reported Wednesday.

The ROC team won the gold medal, followed by the US team which took silver. Bronze went to Japan and Canada came in fourth place.

RBC Sport reports that a sample taken in December from one of the six Russian team members tested positive for trimetazidine, according to a source familiar with the situation, and a source in the Russian Figure Skating Federation.

Brennan, who is also a USA Today sports columnist, attributed the positive test to a person with knowledge of the situation who spoke on the condition of anonymity.

Trimetazidine is a drug used to treat people with a heart condition known as angina. It is on the World Anti-Doping Agency's (WADA) banned list.