Day 4 of Olympic action is in the books from Beijing, and there's been no shortage of standout stories and newsy nuggets to devour. For those who may have been deep in slumber while the 2022 Games were peaking in daytime Beijing hours, here's a roundup of what you missed.

Her performance — which she described as being a "testament to her character"— was so awe-inspiring that China's Twitter-style platform, Weibo, crashed amid due to a massive number of users. Later, Gu, who skis for China but was born in the US, further stirred up public interest when she deftly dodged post-event inquiries regarding her citizenship and nationality. That is a busy day, Ms. Gu.

Team USA figure skater Nathan Chen is quad-flipping and triple-axeling his way toward a gold medal, and breaking world records in the process.

Chen, 22, nailed his short program Tuesday, earning a record-breaking score of 113.97. The mark breaks the previous record set by his rival Japan's Yuzuru Hanyu, who goes by the nickname "Ice Prince."

Chen, however, stands poised to become the sport's king, leading all competitors heading to Thursday's free skate which will determine the event's medal winners.

The US women's hockey team fell 4-2 to Canada in a hotly-contested and highly-anticipated preliminary round match in Beijing. But Canada and the US, who met in the gold medal game in Pyeongchang four years ago, may have yet another chapter to write in their historic rivalry.

Each nation has already secured a spot in Thursday's quarterfinals, which means if they each keep winning, they'll meet again in the finals. Between the two of them, Canada and the US have captured every gold medal in the sport.

And if you missed yesterday's Olympic action, here are a couple of compelling stories from Monday at the Games:

Anthony, who grew up in a beach town, called her Olympic moment "mindblowing."

Speaking with CNN, the 23-year-old noted that "people think we're a bit of an underdog in winter sports but we've actually proven that we're pretty strong."

Parrot describes his cancer fight as a "nightmare journey" and said that while battling the disease, and being unable to compete, he felt "like I was a lion in a cage."

Finland's women's ice hockey team beat the Russian Olympic Committee's (ROC) team 5-0 in the final game of group A round-robin at National Indoor Stadium on Tuesday. Coronavirus fears remained in the backdrop as the Finnish team decided to play the match with their masks on.

"The female lions have decided to play today the match against the Russian Olympic Committee team with masks on their faces," Olympic team Finland said in a tweet. "The team decided after discussing the matter with the International Hockey Federation."

Some background: The ROC women's ice hockey team was subjected to three days in quarantine early last week after several players tested positive for Covid-19. The team has since been cleared to compete at the Games. The team also competed against Canada on Monday with masks on until the third period, after which it played without masks while Canadian players kept their masks on.

Finish hockey player Minnamari Tuominen said she didn't feel the mask while on the ice at first.

“It wasn’t bothering my vision or anything, but after a long shift on the bench it was kind of a little bit difficult to breathe and it was difficult to drink our water,” she said in her comments after the match.

Meanwhile, ROC head coach Yevgeni Bobariko admitted that the quarantine period at the beginning of the Winter Olympics has been tough on the team.

He added that the quarantine prompted a fatigue that has affected the team.

"The only way was to train in the rooms. Obviously, it affected us. The fatigue is basically because of that.”

In case you missed it yesterday, Canadian snowboarder Max Parrot has provided arguably the most inspiring story of the Winter Olympics so far.

Just over three years after he was diagnosed with cancer, Parrot claimed his first Olympic gold medal in the men's slopestyle event in Beijing on Monday.

In what he has described as a "nightmare journey" since his diagnosis with Hodgkin's lymphoma in December 2018, Parrot underwent 12 rounds of chemotherapy before announcing in July 2019 that he had "won" against cancer.

"At times, I felt like I was a lion in a cage because I wasn't able to do what I love the most, which is snowboarding," the 27-year-old said as he reflected on the past three years.

"That was the first time in my life that I had to put my snowboard in the closet. Snowboarding is all I know, so it was really hard for me." 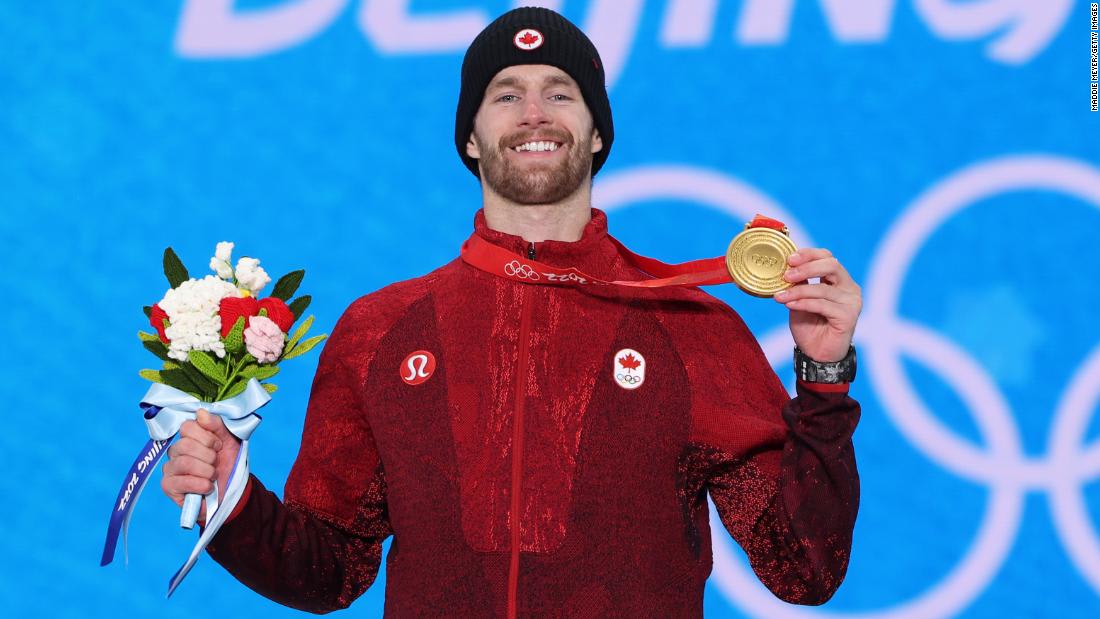 On Day 4 of the 2022 Beijing Games, 10 gold medals were up for grabs. Here's how the competition has shaken out so far.

Curling: Italian pair Stefania Constantini and Amos Mosaner sealed their country’s first ever curling medal at a Winter Olympics with gold in the mixed team doubles.

Speed Skating: Kjeld Nuis of the Netherlands defended his title in the men's 1,500m race in an Olympic record time.

As Day 4 of the Winter Olympics draws to a close, these are some of the best action shots from Tuesday in Beijing – from flying skiers to flexible figure skaters.

Head here to take a look through some of the best photos from the Games so far: 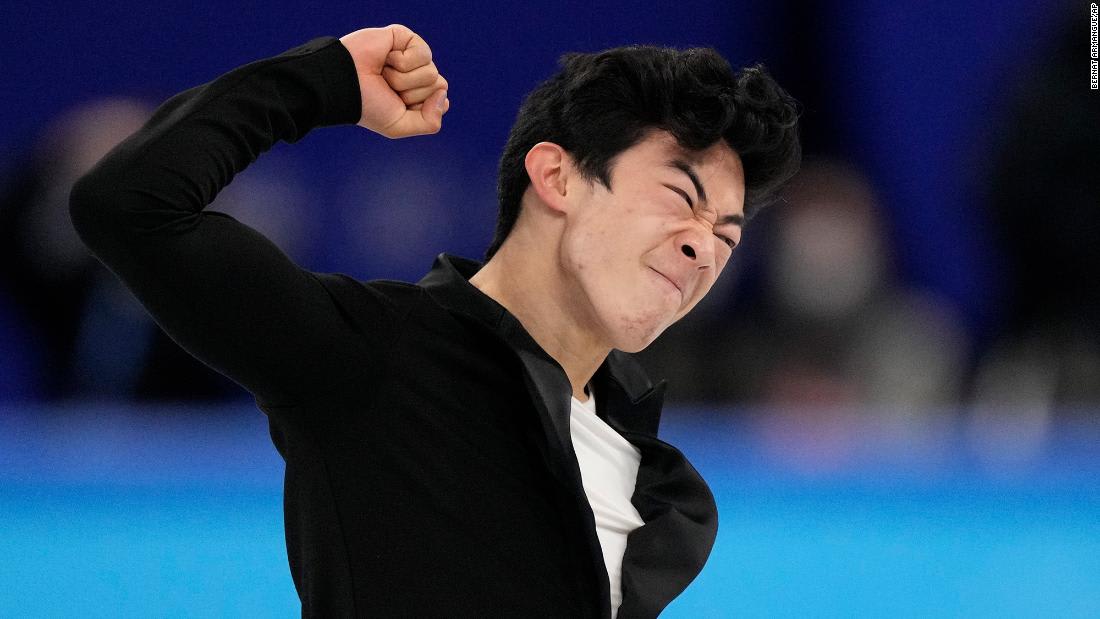 Photos: The 2022 Winter Olympics in Beijing

Germany's Natalie Geisenberger cemented her status as one of the most successful lugers of all time as she stormed to a third consecutive Olympic singles luge title on Tuesday.

The 34-year-old now has a total of six medals to her name, five of which are gold.

Geisenberger ties Italy’s Armin Zöggeler for the most Olympic luge medals won (6) and equals the record of German luger Georg Hackl, who won three successive Olympic men's titles in 1992, 1994 and 1998.

After 18 months away from the sport, she returned to training in September, winning her first race back at the Nations Cup in Innsbruck in November.

Italian pair Stefania Constantini and Amos Mosaner sealed their country’s first ever curling medal at a Winter Olympics with gold in the mixed team doubles, defeating Norway 8-5 on Tuesday.

The pair have gone through the entire competition in Beijing unbeaten having won all nine preliminary games, a semifinal against Sweden and now the final against Norway.

After their win, Mosaner said: "This is an important moment, we managed to win a gold medal and this is an incredible thing.

"But above all the 11 wins and the zero defeats, this is the biggest and most beautiful thing."

Perhaps most important to Constantini, though, was how their run led to a wider awareness of curling in Italy.

"This is the beauty of it," Constantini said. "We managed to get people more curious (about our sport). Lots of Italians and fans are following us and are proud of us. We could feel all their support."

The historic run to the gold also saw Constantini and Mosaner knock out 2018 champion Canada in the round robin stage.

Norwegians Kristin Skaslien and Magnus Nedregotten, bronze medalists in PyeongChang four years ago, were unable to see off the resolute Italians and took silver.

"I think it's a special moment, for sure. Last couple of weeks has been quite stressful. We had some Covid in the team and my coaches are staying at home," he said after his win.

"So a lot of difficult times but being able to defend the Olympic gold from last time and having this amazing fight with Federico (Pellegrino) today was special. It was a lot of fun out there."

The 25-year-old captured his fourth Olympic gold medal after winning three at the 2018 PyeongChang Games.

Beijing 2022 is already seeing new world records and masterful displays across different sports. But here are two US athletes to watch, who are yet to compete at the Winter Olympics

It seems Chloe Kim was destined for Olympic glory, having started snowboarding at the age of four.

The story goes that her father immigrated from South Korea to the US with $800 in hand, later giving up his job to support his daughter's snowboarding ambitions.

Kim was 17 years old when she won the women's halfpipe event at PyeongChang 2018, making her the youngest woman to earn an Olympic gold medal in snowboarding.

She's scheduled to compete in the women's halfpipe event at this year's Games.

World No. 1 speed skater Erin Jackson's hopes of competing at Beijing 2022 were nearly dashed when she failed to qualify for the 500m during the US Trials in January.

However, Jackson received a spot after compatriot Brittany Bowe renounced her place, saying at the time, "No one's more deserving than her to get an opportunity to bring Team USA home a medal."

But in a fortuitous twist, Bowe will still be able to compete in the 500m after the US picked up an extra spot when some countries returned quota slots for the event.

Even though Jackson has only been speed skating for five years, she's a favorite for gold in the women's 500m and women's 1,000m events.

You can read more about our athletes to watch below. 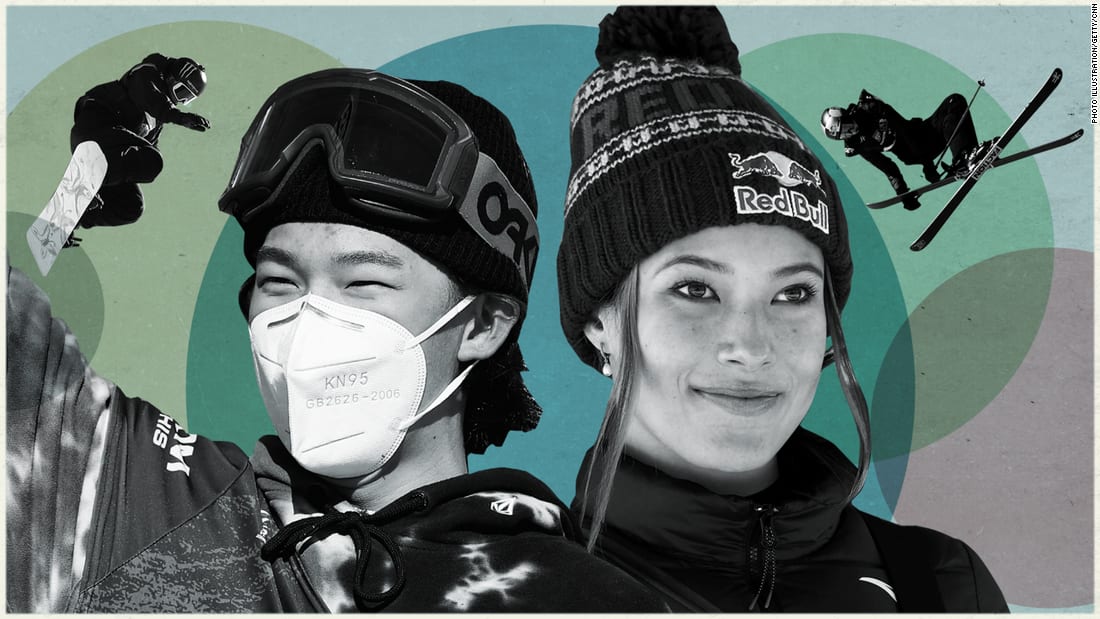