Mexico's Donovan Carrillo said many people told him it was impossible for a Mexican figure skater to qualify for the Olympics, but in Beijing on Tuesday he qualified for the free skate after his performance in the men's short program.

Carrillo is Mexico's first Olympic figure skater in 30 years and his country's flag bearer at Beijing 2022.

Following his skate, Carrillo said he was "super happy" with his performance, with his highlight being the quadruple toeloop.

"I didn't want it to end. I wanted to keep skating and living the Olympic dream," he said.

On being a Latin American athlete at the Beijing Olympics, Carrillo said: "Many people told me during the beginning of my career that this was a crazy dream."

"I always tried to push harder and harder, competition through competition, to try to be the best version of myself. I want people in Latin America and in my country to think about it, to have their big goals and go for it," he said.

On being able to develop an Olympic-level program despite training at a shopping mall ice rink during public sessions, Carrillo said, "It's challenging, I'm not lying."

"But instead of regretting myself and thinking of what I don't have, I always try to work with what I have. That's key for me being here. It's better to focus on what you have and try to exploit that and live the dream."

In a display of Olympic sportsmanship after the big air freeski final, China's Eileen Gu and Switzerland's Mathilde Gremaud rushed to comfort a visibly upset Tess Ledeux from France.

Ledeux looked disappointed following her third and final jump, knowing that it wasn't enough to clinch the gold.

The 20-year-old finished in silver position, with Gu taking the win and Gremaud the bronze.

On China's Twitter-like platform Weibo, Gu dominated searches with seven out of the 10 top trending topics all about her victory.

Gu has become a Beijing 2022 poster child for China and has 2.6 million followers on Weibo, with fans leaving 90,000 comments in half an hour after her win.

American-born Gu, whose mother is from China, decided to compete for Team China at the Games. She has the overwhelming support of the home crowd and her image has been splashed across billboards, magazine covers and promotional videos in China.

The Beijing Olympic Committee identified six new Covid-19 cases among Olympics-related personnel on Monday, it said in a statement Tuesday.

All the cases were identified in people already in the “closed loop” system, which separates Olympic athletes, stakeholders, and staff from the public.

Five of the infections were from athletes or team officials, and one involved an Olympic stakeholder.

Since the official “closed loop” system began on Jan. 23, some 393 Olympics-related personnel have tested positive for Covid-19, with 159 of those cases involving athletes or team officials.

Covid situation in Beijing: It comes as Beijing reported no new locally transmitted cases of Covid-19 outside the Olympic bubble on Monday, the first time since the city clamped down on a recent cluster.

On Monday, authorities lifted all lockdown measures for neighborhoods in Fengtai district where cases had been reported.

Covid in China: Overall, China reported 65 locally transmitted symptomatic cases on Monday, including 64 in Guangxi and one in northern Tianjin city, according to the National Health Commission. The country also reported four asymptomatic cases, including two in northeastern Heilongjiang province and two in Guangxi.

Pumping music and upbeat commentary filled the newly-built Big Air Shougang venue, which is set in the backdrop of four giant industrial chimneys on the outskirts of Beijing.

American-born Gu, whose mother is from China, decided to compete for Team China at the Games.

As well as her skiing career, she is also a model, brand ambassador and plans to attend Stanford in the fall.

In a hotel within the closed loop in the mountain area of Zhangjiakou, staff were seen crowded around a big TV to watch Gu compete. 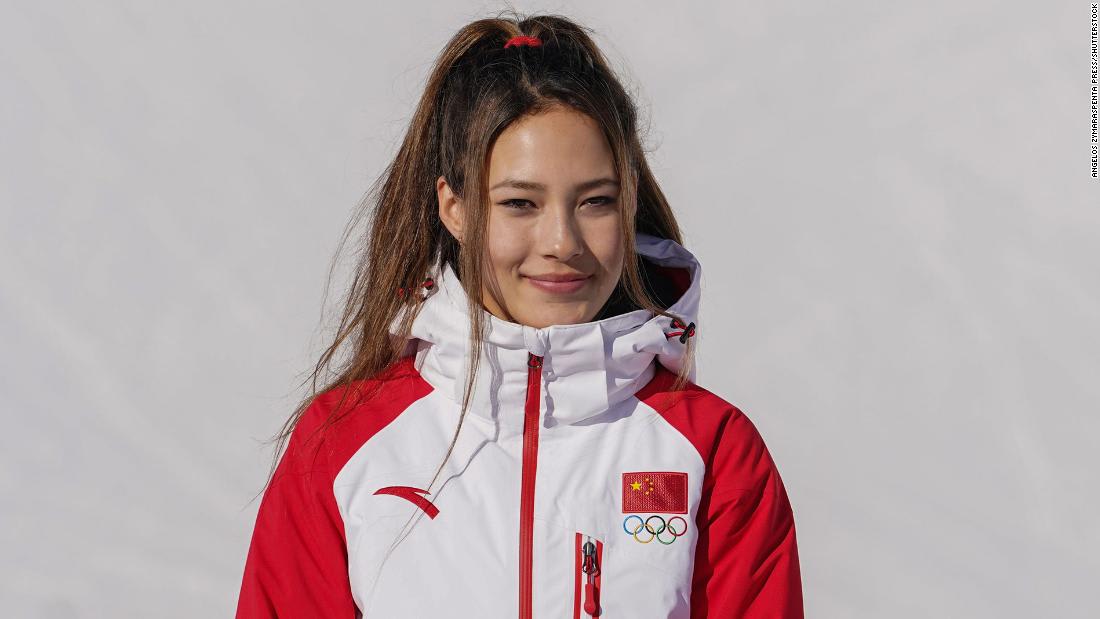 Eileen Gu is the poster child for a new type of Chinese athlete. But one wrong move could send her tumbling

Gu jumped into the top position with her third run, scoring 94.50. Her total score was 188.25 in the event's debut at the Winter Olympics.

Japanese skating sensation Yuzuru Hanyu has made it his goal to attempt the fabled quadruple axel during his Beijing Olympics appearance.

The jump has never been completed in competition before, let alone at the Olympics.

But what exactly is the jump everyone is talking about? The quadruple axel is a jump that involves four-and-a-half rotations in the air.

An axel is the most challenging of figure skating jumps "because it is the only jump in the sport in which skaters take off facing forward," according to the Olympics website.

"It’s also the easiest for fans to spot at home: If the skater is facing forward when he or she takes off for the jump, kicking their free leg into the air to spring into it, it’s an Axel."

Skating history already made: On Monday, ROC's Kamila Valieva became the first woman to land a quad at the Games.

The 15-year-old Valieva landed two quads in the team event. First was a quad Salchow, which involves four complete rotations in the air, and the second was a quad toeloop and she landed a triple Axel in the same routine.

Hanyu, 27, is hoping to make history in Beijing by attempting the quadruple axel — a jump that has never been done at the Olympics, or elsewhere.

The reigning two-time Olympic men's singles champion, who won successive golds at Sochi 2014 and Pyeongchang 2018, is also aiming for a third gold.

It's a feat not achieved in men's figure skating since the 1920s.

He left Pyeongchang 2018 disappointed following a fifth-place finish in the individual event. Since then, Chen embarked on a three-year international winning streak that ended with a third-place finish at Skate America in Las Vegas last October.

He arrives in Beijing as the favorite despite the presence of Hanyu.

Yet for Chen, to compete against his "idol" is nothing but a privilege.

"He's done so much for the sport, both with himself and then all the things that he's done outside of the rink — I think he's just really changed the sport for the better," Chen said.
"Just to be able to have opportunities to compete against him, to be on the same ice as him, is an honor in itself.