Day 1 of the 2022 Beijing Winter Olympics

Our live coverage has ended for the day. Read up on the latest out of Beijing below. 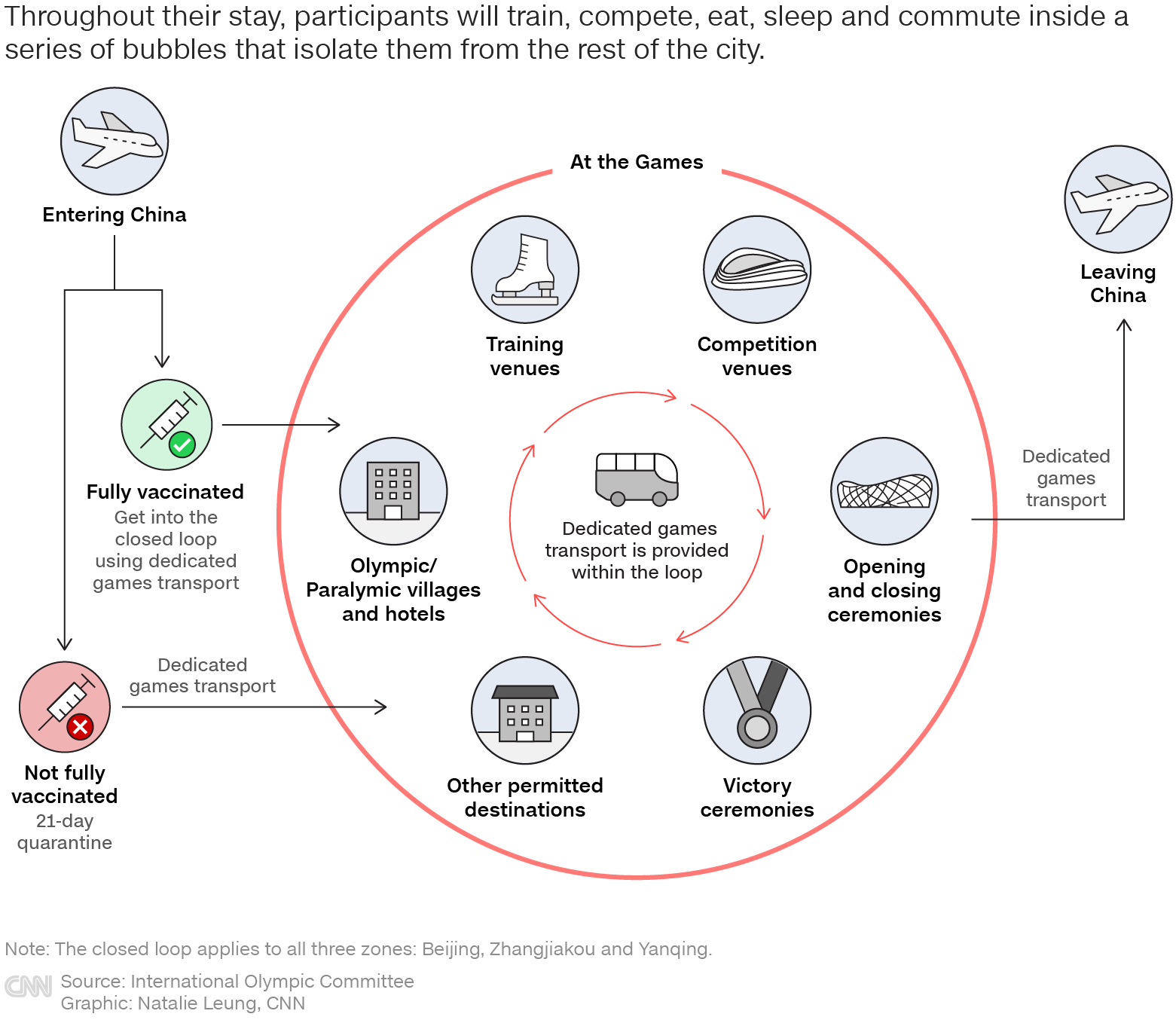 In a bid to keep the Games Covid-free -- and to prevent the virus from spreading into the wider population -- Chinese authorities have constructed a vast network of bubbles, known officially as the “closed loop,” that separates the Games from the host city.

The stringent rules mean those on the inside face daily PCR tests, robots serving food, and no chance to explore Beijing's sights -- while those on the outside have no access to the Olympic events happening in their own city.

Technology has also cut down the number of person-to-person interaction inside the loop. At the media center, robots serve food at the cafeteria, while another robot mixes and serves cocktails.

But the system isn't perfect. Many of the robots still require human supervision; a fully masked staffer stood beside the bar, overseeing the robot bartender.

And the transport system within the loop can be cumbersome. Walking is rarely an option, and people are instead required to take dedicated buses or taxis. Staggered bus schedules mean people can face a long wait to get from one point to the other -- even if the destination is just a few blocks away.

It would be hard to hold a conversation over the deafening sound of the snow machines preparing the Olympic venues northwest of Beijing. They are loud and they are everywhere, blowing snow across what will be this month's most-watched slopes.

Snow sports in climate crisis: In an Olympic first, though not an achievement to boast about, climate variability has forced the Winter Games to be virtually 100% reliant on artificial snow -- part of a trend that is taking place across winter sports venues around the world.

As the planet warms and the weather becomes increasingly more erratic, natural snow is becoming less reliable for winter sports, which forces venues to lean more on artificial snow.

But it comes at a cost: human-made snow is incredibly resource-intensive, requiring massive amounts of energy and water to produce in a climate that's getting warmer and warmer.

About 49 million gallons of water will be needed to produce snow for The Games, according to the International Olympic Committee -- that's a day's worth of drinking water for nearly 100 million people. 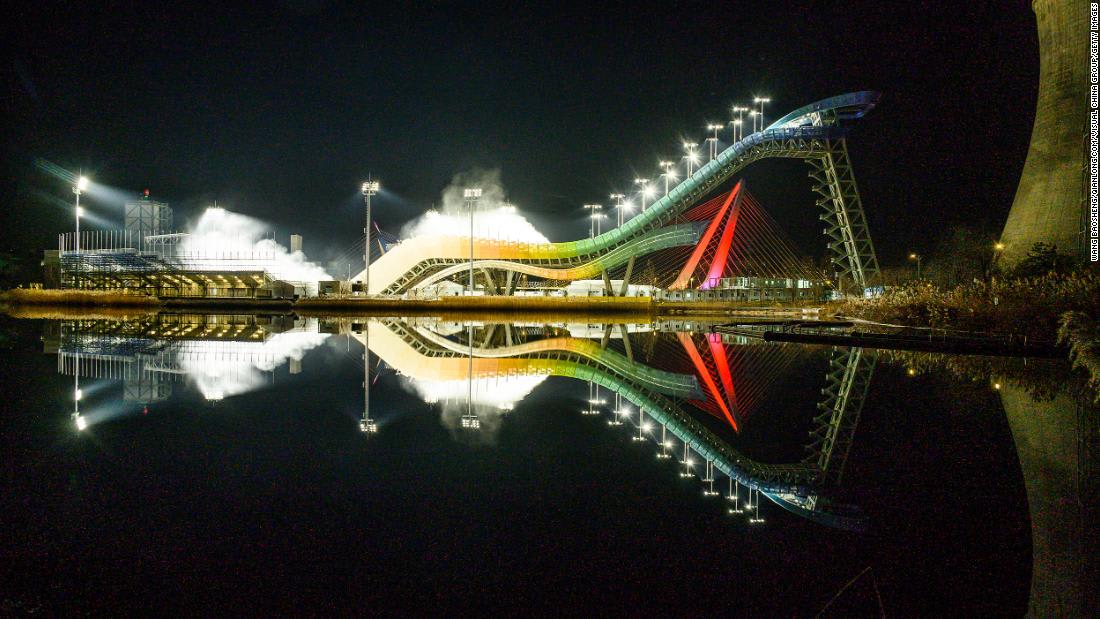 All the Beijing snow is human-made -- a resource-intensive, 'dangerous' trend as planet warms

Of the 11,000 Olympians competing in Tokyo, at least 186 identified as LGBTQ, according to the SB Nation blog Outsports -- a groundbreaking moment in the history of the representation of marginalized sexualities and gender identities in the sporting world.

Outsports reports that the Beijing Games will have a record number of publicly out athletes for the Winter Games -- yet, it looks like those Olympians may be performing in the shadow of growing challenges faced by sexual minorities and their supporters in China.

Growing pressure in China: Although the nation removed homosexuality from its official list of mental disorders in 2001, the LGBTQ community in China continues to face official harassment and same-sex marriage remains illegal across the country.

In recent years, the Chinese government has accelerated its pressure on LGBTQ+ rights and spaces. In 2017, Chinese authorities banned online video platforms from sharing content that contained the depiction of "abnormal sexual behaviors" -- which, according to those authorities, included same-sex relationships.

Steady crackdown: In July 2021, WeChat -- a popular messaging app in the country -- shut down more than a dozen of LGBTQ+ accounts run by university students and sparked widespread concern over the censorship of gender and sexual minorities.

The year before, Shanghai Pride -- China's longest-running Pride event usually attended by thousands of LGBTQ+ people from across the nation -- abruptly canceled all their scheduled activities due to mounting pressure from local authorities, according to a source with knowledge of the situation that spoke to CNN at the time.

At just 10 years old, Nathan Chen predicted in a national TV interview that he would make the 2018 US Winter Olympic figure skating team.

So began a relentless pursuit of victories an a laser focus that culminated in the realization of his own forecast in PyeongChang.

Yet as he prepares for his second Olympic outing in Beijing this month, Chen has discovered that the key to glory on the rink may -- paradoxically -- lie away from

Chen finished first in the men’s single short skate on Friday, scoring a personal best and putting Team USA in the lead in the team event.it.

Road to 2022: Despite the fulfillment of a dream in 2018, an 18-year-old Chen ultimately left South Korea disappointed following a 5th-place finish in the individual event. He won a bronze in the team event but was critical of his own contribution.

In the four years since, Chen has gone from strength to strength, racking up three straight world championships and sealing a 6th consecutive US title to arrive in Beijing as a favorite.

Yale student: It's been a run of form made all the more impressive by the simultaneous juggling of a statistics and data science degree at Yale, but this very balancing act could help guide the 22-year-old to an as yet elusive Olympic gold.

"Before, I really took it for granted and was like, 'Hey, I'm just here to compete and here to win and that's all I want to focus on,'" Chen told CNN Sport's Coy Wire in January.

"A lot of being able to perform well is resulted upon being able to spend time off the rink and recovering, giving yourself the time to be a human and friend and fill the role that's not an athlete all the time.

"Being able to spend time with my friends, my family, pick up hobbies, do things that are unrelated to skating -- just sort of rest myself physically and mentally -- has been really useful." 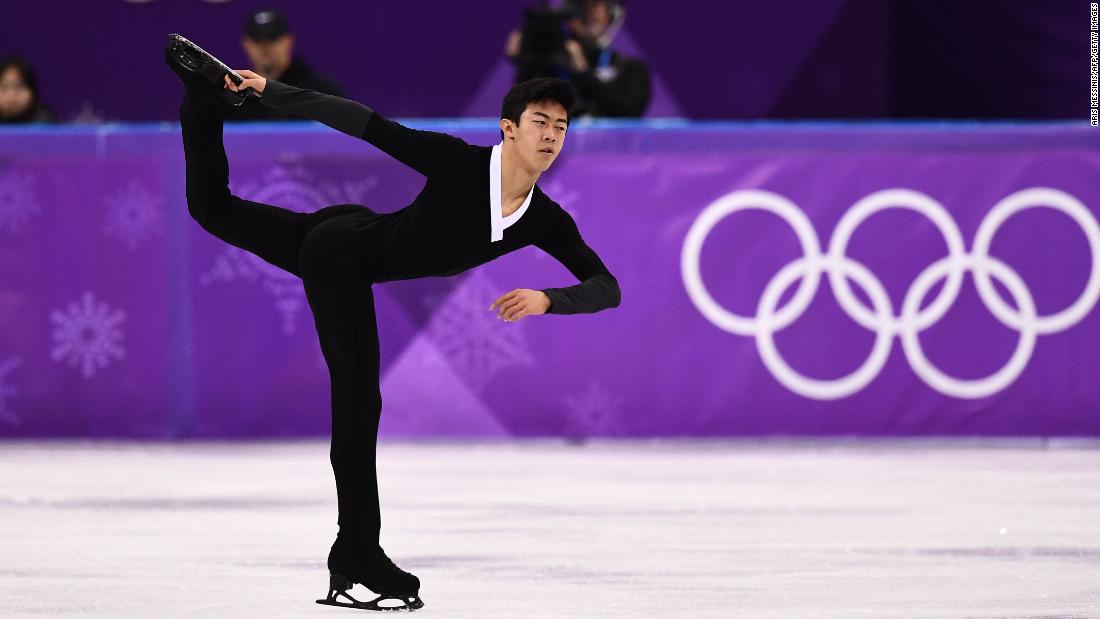 Saturday marks the first full day of competition in the Winter Olympics, after Friday's opening ceremony -- though technically, competition had already been underway. A host of sports including ice hockey and luge had already started ahead of the curtain raiser.

What competitions are happening today:

Which athletes to watch:

The opening ceremony took place Friday night, officially kicking off the Winter Olympics and introducing the competing countries to the world.

Iconic venue: The ceremony was held at the Beijing National Stadium, commonly referred to as the Bird's Nest because of its design -- which is also where Olympic organizers held the opening ceremony for the 2008 Summer Olympics. Beijing is the first city in history to host both a Summer and a Winter Olympics.

The guest list: Chinese President Xi Jinping attended the ceremony and he was joined by many international dignitaries including Russia's Vladimir Putin. But notably absent were leaders of major democratic powers, with an ongoing diplomatic boycott by the US, Australia, Great Britain and Canada.

A scaled-down show: The ceremony this time around wasn't as grand or long as the 2008 one, given Covid-19 restrictions as well as practical concerns with participants in the freezing cold.

But it was still a colorful show; performers created a flower display using LED lights, and held up lamps in the shape of doves. Athletes paraded through the stadium, entering the venue through a spectacular entrance described as representing the gate and window of China.

At the end of the ceremony, the Olympic flag was hoisted and fireworks burst in the shape of the Olympic rings high above the stadium.

Uyghur torchbearer: The Olympic cauldron was lit by two athletes including skier Dinigeer Yilamujiang, who is a Uyghur, an ethnic minority in China's far west region of Xinjiang.

China has been accused of massive human rights violations against the Xinjiang Uyghurs. The United States and United Kingdom have gone so far as to accuse the Chinese government of genocide against the Uyghurs and other ethnic minorities.

Covid precautions: The stadium was only about half full, with attendance restricted due to Covid protocols. All the athletes wore face masks as they paraded.

Throughout the Games, tickets will not be sold to the general public due to Covid concerns -- instead, they will be distributed by authorities to select groups and individuals.

Apart from numerous Western countries participating in protest of China's alleged human rights abuses -- including Australia, Canada and Great Britain -- some Asian territories have also decided not to send any officials, including Taiwan, India, and Japan. 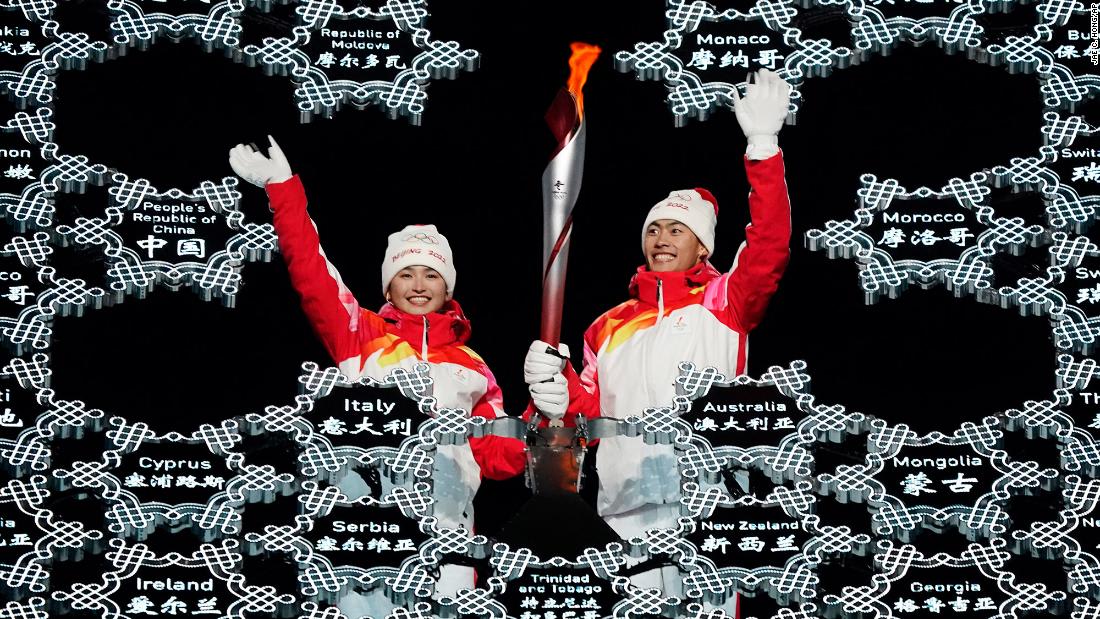 Here are answers to some of the burning questions you might have about the 24th Winter Games.

How many athletes compete in the Winter Olympics?

There are 91 delegations competing for 109 gold medals across seven sports in Beijing.

According to the International Olympic Committee (IOC), there will be about 2,900 athletes doing their best in their selected disciplines.

One of the most interesting names in the sporting lexicon, skeleton is a fan favorite at the Winter Olympics.

With its roots in sleighing, athletes participate on the same track across two days, getting four runs each. The competitor with the fastest combined time wins the event.

It fell in and out of the Olympic program for a number of years, before it was reintroduced at the Salt Lake City 2002 Winter Olympics.