Our live coverage of the situation in Afghanistan has moved here.

Taliban forces are trying to control crowds rushing to get into the Hamid Karzai International Airport in Kabul, CNN International Security Editor Nick Paton Walsh said while describing the "utterly startling scenes" as people desperately try to get out of the country.

Military flights just resumed after being temporarily paused Monday, but Walsh said large groups of people were storming some of the gates and scaling the 10- to 20-foot concrete walls to get onto the airfield.

The Taliban are pushing crowds back, using vehicles taken from Afghan security forces to control people, Walsh said, adding that the volume of people were a "reminder of the panic felt by US troops trying to security that area."

"It's startling too to see the Taliban trying to bring some degree of order to those crowds running toward the airport," Walsh reported.

Some context: Pentagon press secretary John Kirby said that the Department of Defense is working to evacuate Americans as well as up to 30,000 Afghan Special Immigrant Visa applicants into the US.

White House Deputy National Security Adviser Jon Finer said the US has made clear to the Taliban “in no uncertain terms” not to interfere with Afghans who are attempting to get to the Kabul airport for potential evacuation, however those Afghans should wait until they are told it is time for their evacuation before going to the airport.

US military flights have resumed at the Kabul airport for now, a US defense official tells CNN. The flights were suspended because of crowds of Afghans on the airfield.

The crowds have been cleared but the military anticipates continuing sporadic clearing operations if crowds continue to gather.

After the Taliban rapidly gained control over Afghanistan, leaving scores of people scared, helpless and desperate to flee, the United States' withdrawal strategy has been greatly criticized.

"The 20 years of American effort collapsed in a whimper," she added.

The future of Afghanistan under the Taliban is uncertain as of today.

"We don't know whether there's any serious effort in Kabul today to actually construct some kind of transitional process that is a peaceful process and one that actually involves various different constituencies in Afghanistan. That's what the Taliban says but we haven't seen any evidence of it. It's never been the case in the past," she said.

Amanpour had reported out of Afghanistan when the Taliban first took over in 1996, when she made certain observations.

"They have never governed any space. They are not a government. At least they certainly they weren't then and we don't know what they are now," she explains. "They have imposed their form of fundamentalism and radical Islamic Sharia on a population, not all of whom believe in that. We do not know how they are going to react to now being in charge."

This puts the fate of many women, children and journalists at risk.

"Last time they didn't give a hoot about what the rest of the world thought. They did exactly what they wanted, backed by enough power from Pakistan and certain other quarters of the world ... certainly, women are right to be incredibly scared," Amanpour said.

"Let us not forget that the designation of the Taliban as a terrorist organization still stands, and it's a very big ask to think this is going to be some kind of inclusive government with rights for all," she added.

Planes carrying more than 100 Afghan soldiers have landed at the airport in the city of Bokhtar in Tajikistan, an official from the Tajikistan Ministry of Foreign Affairs told CNN on Monday.

Tajikistan shares a border with Afghanistan.

"After receiving an SOS signal from Afghanistan's side, in accordance with international obligations, Tajikistan gave permission to land the Afghan aircrafts at the airport in the city of Bokhtar," a spokesman with Tajikistan's MFA said.

The official said he didn’t know how many planes landed.

He added that all the arrived Afghan servicemen are temporarily accommodated in the city of Bokhtar. 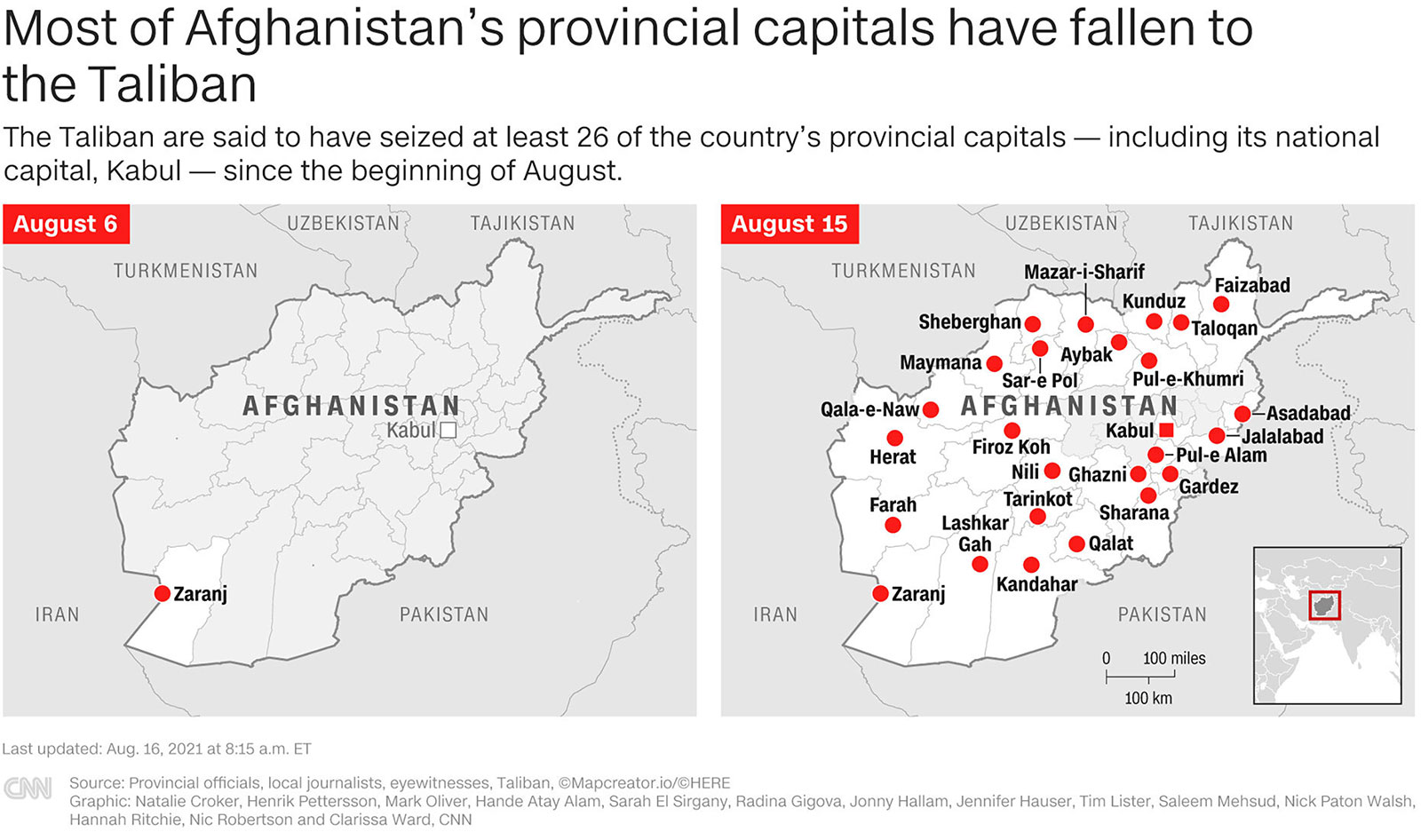 The Indian government has been forced to pause its repatriation efforts for citizens stranded in Afghanistan due to the closure of commercial operations at Kabul airport.

“The situation in Afghanistan is being monitored on a constant basis at high levels. The Government will take all steps to ensure the safety and security of Indian nationals and our interests in Afghanistan,” read a statement issued by the Ministry of External Affairs Monday.

“We are in constant touch with the representatives of Afghan Sikh and Hindu communities. We will facilitate repatriation to India of those who wish to leave Afghanistan. There are also a number of Afghans who have been our partners in the promotion of our mutual developmental, educational and people to people endeavours. We will stand by them,” stated the official ministry spokesperson.

Flights to Kabul from India were suspended today, and according to the government-run Air India airlines spokesperson, they have no flights scheduled till the airspace over Afghanistan opens up again.

US forces at the Kabul airport shot and killed two armed men Monday after they fired on US forces, according to a US defense official.

The official would only say the men were armed and the US has not verified they were Taliban members. The US for now believes it was an isolated incident.

Additionally, the military has a report that one US troop has been injured by a gunshot in another incident at the airport, but the circumstances have not been confirmed, the official said.

An Afghan Air Force aircraft crashed in the Surxondaryo region of Uzbekistan on Sunday, while trying to cross the border, ​an official from the Ministry of Defense of Uzbekistan told CNN on Monday. ​

"Yesterday the air defense forces suppressed an attempt to violate the state border,” a representative from the press-service of the Ministry of Defense of Uzbekistan said. ​

It was not immediately clear what the intent of those on board the aircraft was.

The official would not clarify when pressed further if suppressed meant shot down.

“Now representatives of the armed forces and security forces are conducting an investigation into this fact. After its completion, the media and the public will be provided with detailed information," said press-service of the Ministry of Defense of Uzbekistan.

Russian state media RIA Novosti is reporting two pilots survived and are in serious condition in a hospital in Termez, according to an employee of the Termez branch of the Republican Scientific Center for Emergency Medical Aid. MOD of Uzbekistan wouldn’t give other details to CNN and said more information would be available after an investigation is completed.

European Union foreign ministers will hold an emergency meeting on Tuesday to discuss the seizure of power in Afghanistan by the Taliban, EU foreign affairs chief Josep Borrell said Monday.

“Following latest developments in Afghanistan, and after intense contacts with partners in the past days and hours, I decided to convene an extraordinary VTC [video conference] of EU Foreign Ministers tomorrow afternoon for a first assessment,” Borrell tweeted.

“Afghanistan stands at a crossroad. Security and wellbeing of its citizens, as well as international security are at play,” he added.

European Parliament President David Sassoli also called for a “united EU response” to the situation unfolding in Afghanistan, adding that asylum “must be granted” to all those in danger of persecution.

“The country needs a lasting and inclusive political solution that protects the rights of women and allows Afghans to live in safety and with dignity,” Sassoli tweeted.

In an earlier joint statement shared by the EU External Action Service (EEAS), members of the international community stated their readiness to assist the Afghan people, affirming their right to “safety, security and dignity.”

“We support, are working to secure, and call on all parties to respect and facilitate, the safe and orderly departure of foreign nationals and Afghans who wish to leave the country,” the joint statement read.

“Those in positions of power and authority across Afghanistan bear responsibility - and accountability - for the protection of human life and property, and for the immediate restoration of security and civil order,” the statement added.

National security adviser Jake Sullivan said Monday the American people can expect to hear from President Biden “soon” but would not say if that would be today.

Biden, who remains at Camp David on his August vacation, is “deeply engaged” on the situation and in contact with his national security team regarding the mission of getting Americans and Afghans evacuated, according to Sullivan.

Secretary of State Tony Blinken on CNN’s State of the Union Sunday refused to say Biden bears some burden for the hasty US exit from the country as the Taliban swiftly took control of the capital city Kabul yesterday.

Blinken argued that Biden took prudent steps to have the resources in place to get out US diplomats.

“What the President has done is make sure that we were able to adjust to anything happening on the ground, and the fact that we – that he sent additional forces in, we had those forces at the ready, fully prepared to go in the event that this moved in a direction where we needed forces in place to ensure that our personnel, was safe and secure, to ensure also that we could do everything possible to bring out of Afghanistan. Those Afghans most of the risks, that's exactly what we're doing,” Blinken said Sunday.

When pressed by Jake Tapper as to why the US did not remove the US diplomats and Afghans who worked with the US first, before drawing down troops, Blinken said that the situation with the troops on the ground was not sustainable because deal with the Taliban which was struck under former President Trump that all US troops would leave by May 1. The Biden administration has repeatedly pointed to that deal as a major factor which fueled the US troop withdrawal from the country.

“That status quo was not sustainable,” Blinken said. “Like it or not, there was an agreement that the forces would come out on May 1st. Had they – he we not have we not begun that process, which is what the president did, and the Taliban saw, then we would have been back on board with the Taliban, and we would have been back at war with 10s of 1000s of troops having to go in because the 2500 troops we had there, and the airpower would not have sufficed to deal with the situation, especially as we see, alas the hollowness of – the Afghan security forces.”

Blinken argued that keeping US troops in Afghanistan is “simply not in the national interest.”

Blinken also would not point to anything that the Biden administration should have done anything differently in their approach to withdrawing from Afghanistan.