Our live coverage of the US' withdrawal from Afghanistan has moved here.

Secretary of Defense Lloyd Austin said he is "proud of those with whom I served and led" in a statement marking the end of the conflict in Afghanistan.

Austin said the evacuation effort was "historic" and that "no other military in the world could accomplish what we and our allies and partners did in such a short span of time."

"That is a testament not only to our forces’ capabilities and courage but also to our relationships and the capabilities of our allies and partners," he said.

The Department of Defense has tweeted a picture of Maj. Gen. Chris Donahue, commander of the 82nd Airborne Division, boarding a C-17 to depart Kabul.

He was the last soldier to depart the country.

On Monday, Gen. Kenneth "Frank" McKenzie, the top general of US Central Command, told reporters that Donahue and the top US diplomat in Kabul, Charge d’Affaires Ross Wilson, were the last two US officials to step off of Afghanistan soil and onto a US military aircraft out of Afghanistan.

“On the last airplane out was Gen. Chris Donahue, commander of the 82nd airborne division and my grand force commander there, and he was accompanied by our charge Ambassador Ross Wilson, so they came out together,” McKenzie said.

“The state and defense team came out on the last aircraft and were in fact the last people to step on the ground, step on the airplane,” he added.

Secretary of State Antony Blinken said the US and its allies are discussing ways to reopen the airport in Kabul as quickly as possible to facilitate safe travel out of Afghanistan for Americans, US legal permanent residents and Afghans who worked with the US to leave the country.

“We discussed how we will work together to facilitate safe travel out of Afghanistan, including by reopening Kabul’s civilian airport soon as possible,” Blinken said.

He continued: “And we very much appreciate the efforts of Qatar and Turkey, in particular, to make this happen. This would enable a small number of daily charter flights, which is a key for anyone who wants to depart from Afghanistan moving forward.” 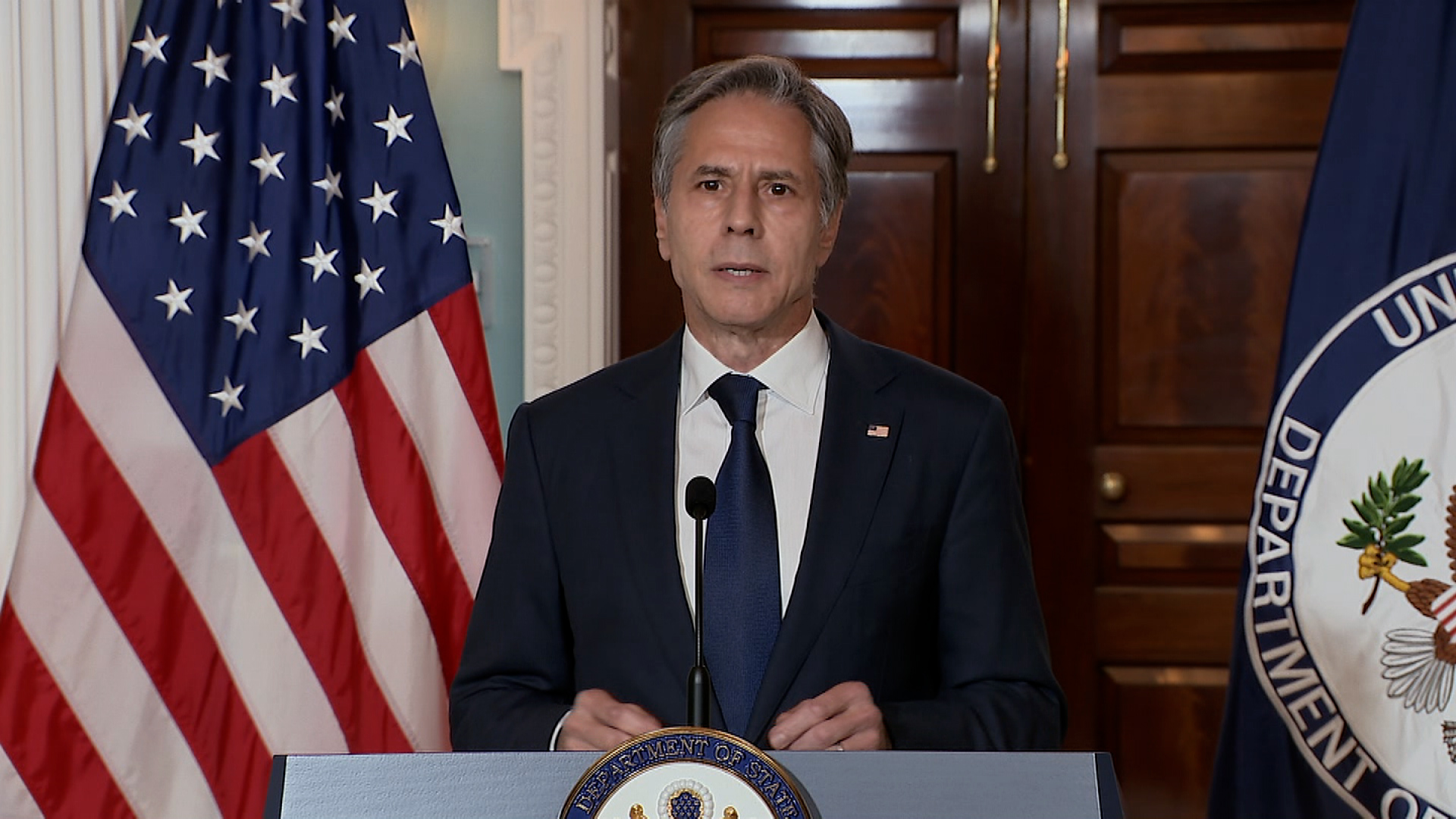 Secretary of State Antony Blinken called the United States' next steps in Afghanistan "a new chapter," saying the country will now lead a diplomatic mission with the nation after it withdrew all of its military forces.

"A new chapter of America's engagement with Afghanistan has begun. It's one in which we will lead with our diplomacy. The military mission is over. A new diplomatic mission has begun," Bllinken said in remarks from the State Department.

Blinken outlined the US' plans for the "days and weeks ahead," including suspending their diplomatic presence in Kabul as of today and creating a new team.

"First, we built a new team to help lead this new mission. As of today, we suspended our diplomatic presence in Kabul and transferred our operations to Doha, Qatar, which will soon be formally notified to Congress. Given the uncertain security environment and political situation in Afghanistan, it was the prudent step to take," he said.

Blinken said that for the time being, the US will use this post in Doha to "manage our diplomacy with Afghanistan, including consular affairs, administrating humanitarian assistance, and working with allies, partners and regional and international stakeholders to coordinate our engagement and messaging to the Taliban."

The secretary of state thanked the top US diplomat in Kabul, Charge d’Affaires Ross Wilson, for his work in Afghanistan, saying he has "done exceptional, courageous work during a highly challenging time." 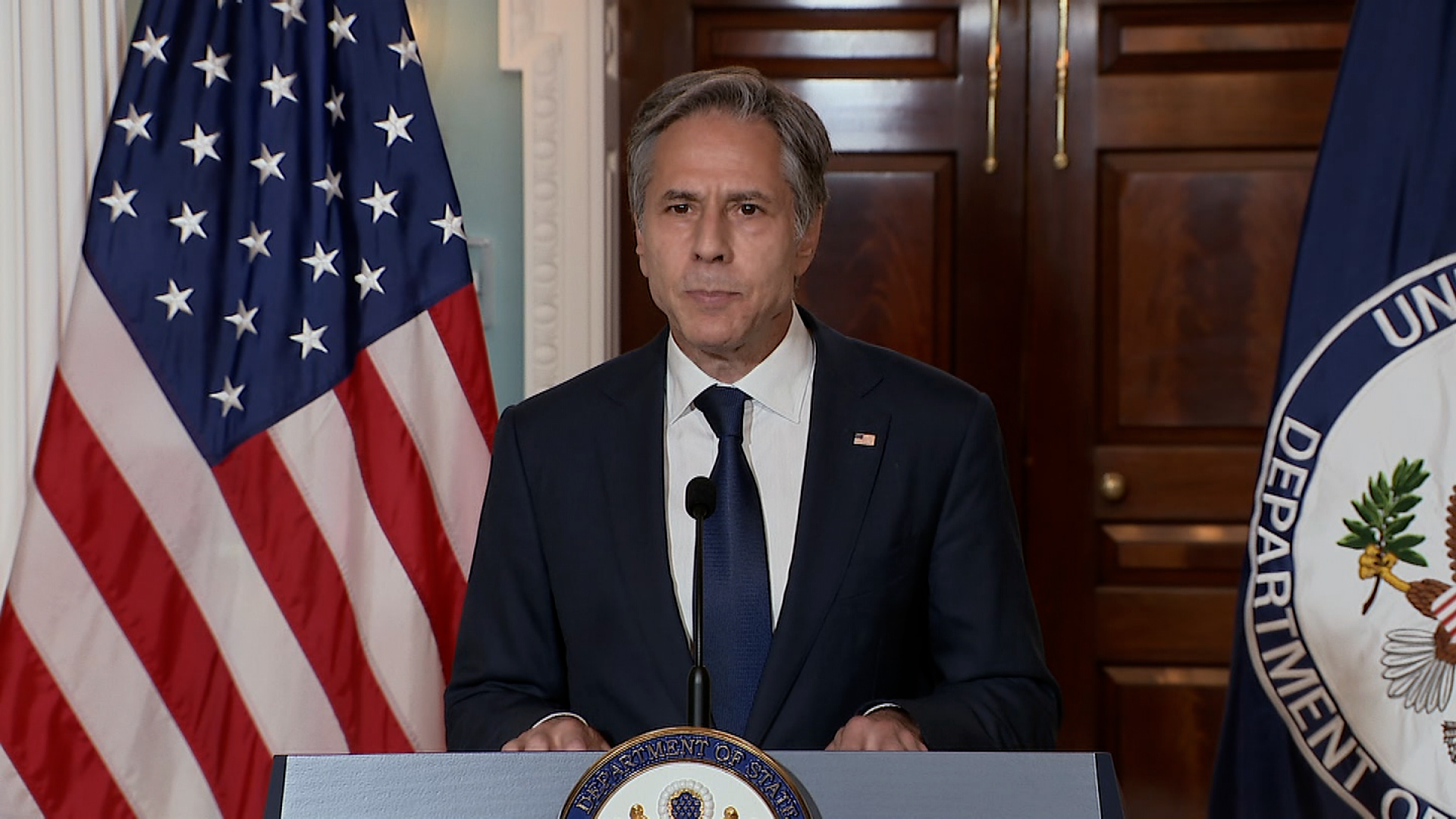 Secretary of State Antony Blinken said Monday that State Department believes there is “a small number of Americans, under 200 and likely closer to 100, who remain in Afghanistan and want to leave.”

“Our commitment to them, and to all Americans in Afghanistan, and everywhere in the world, continues,” Blinken said.

Blinken said the State Department would help Americans leave no matter when they decide that they wish to depart.

CENTCOM Commander Gen. Kenneth McKenzie said earlier Monday that no American citizens were evacuated on the last five flights out of Afghanistan.

On the heels of the United States officially completing the withdrawal from Afghanistan, US Secretary of State Antony Blinken lauded the effort of the operation, calling it "one of the most difficult in our nation's history."

Speaking from the State Department, Blinked referenced the various challenges of the mission, noting that what the United States achieved was a "feat of logistics and coordination under some of the most challenging circumstances imaginable."

With the Pentagon announcing that the last US military planes have left country, the United States' longest war formally came to a close, an achievement that relied on the efforts of countless Americans, both in Afghanistan and stateside.

"I want to commend our outstanding diplomats who worked around the clock and around the world to coordinate the operation," said Blinken, who noted completing the task required the solving of "problem after problem to keep the mission moving forward."

Calling the evacuation operation "very personal," the secretary of state referenced the countless lives lost throughout the war.

"We also lost cherished members of our foreign service community in Afghanistan," he said, adding "we'll never forget them."

Rescuing Americans and Afghan partners alike became "more than just a high stakes assignment for our team," said Blinken. Instead, he called it a "sacred duty," one conducted on a global stage, allowing the world to see how American "diplomats rose to the challenge with determination and heart." 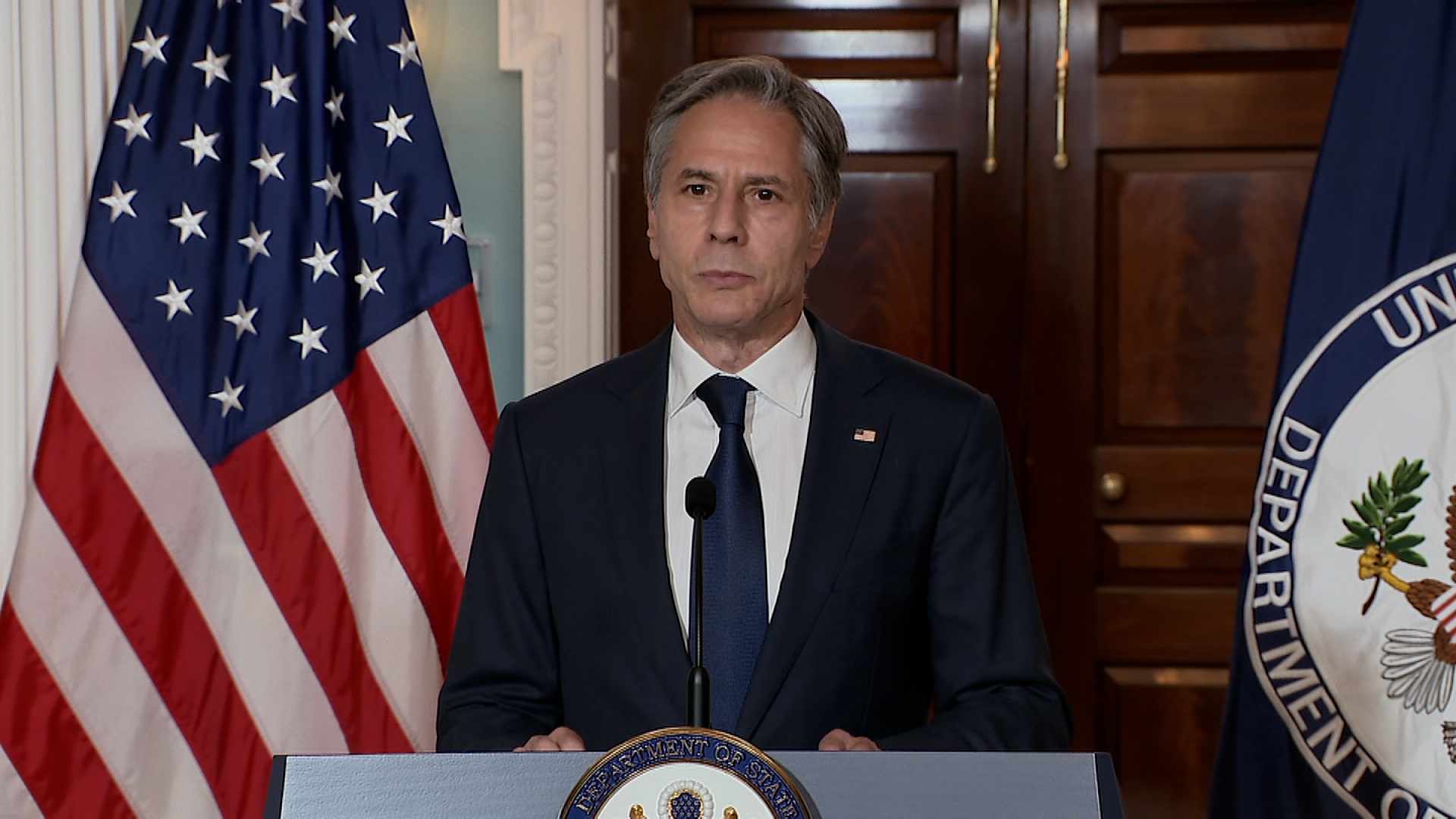 Secretary of State Antony Blinken is delivering remarks on Afghanistan after the Pentagon announced that the last US military planes have left country – marking the end of the United States' longest war.

During his remarks tonight, Blinken thanked the US' allies and partners.

"This operation was a global endeavor in every way. Many countries stepped up with robust contributions at the airlift including working at the airport. Some are now serving as transit countries allowing evacuees to be processed on their way to the final destination. Others agreed to resettle Afghan refugees permanently and we hope more will do so in the days and weeks ahead. We're truly grateful for their support. Now, US military flights have ended and our troops have departed Afghanistan," he said.

The exit also marks the first time in nearly two decades that the US and its allies have not had troops on the ground in Afghanistan. After $2 trillion in spending and nearly 2,000 US troops killed in action, the pullout also raises questions about the utility of the 20-year war.

With no US diplomats remaining in the country a senior State Department official said that they expected the US Embassy in Kabul to suspend embassy operations upon the end of the military retrograde but said "that doesn't mean that we are suspending any commitments to American citizens in Afghanistan, to at risk Afghans, to the Afghan people."

As of Monday, more than 122,000 people had been airlifted from Hamid Karzai International Airport since July, Pentagon spokesman John Kirby told reporters, including 5,400 Americans.

Some of the US military equipment used in Afghanistan was removed from the country and other items were disabled, Gen. Frank McKenzie, commander of US Central Command, told reporters during a briefing on Monday.

The US military kept some equipment operating until nearly the end of the withdrawal to protect US forces and people at Kabul international airport, McKenzie said. That equipment was “demilitarized,” McKenzie said, meaning it was disabled in a way that makes it impossible to use.

As an example, McKenzie said he advanced C-RAM defensive system, which stands for Counter-Rocket, Artillery, and Mortar, was left at Hamid Karzai International Airport. The automated C-RAM system, which detects incoming fire and destroys it with a machine gun, was activated just one day before the withdrawal was complete, when militants fired approximately five rockets at the airport. Two rockets that would have landed on the field were intercepted by C-RAM.

“It’s a complex procedure, complex and time intensive procedure to break down those systems so we de-militarized those systems so that they’ll never be used again, and we just felt it more important to protect our forces than to bring those systems back,” McKenzie said.

The US military also left behind about 70 MRAPS or Mine Resistant Ambush Protected Vehicles, 27 Humvees, which are tactical vehicles, and 73 aircrafts at the Kabul airport. This equipment was disabled, McKenzie said. A “total of 73 aircraft, those aircraft will never fly again when we left, they’ll never be operated by anyone,” McKenzie said.

President Biden thanked the final US forces serving in Afghanistan for executing the “dangerous retrograde from Afghanistan as scheduled,” with no further loss of American lives, in a statement released Monday evening, making the end of the United States’ longest war.

“The past 17 days have seen our troops execute the largest airlift in US history, evacuating over 120,000 US citizens, citizens of our allies, and Afghan allies of the United States. They have done it with unmatched courage, professionalism, and resolve,” the President wrote in the statement released Monday night.

“Now, our 20-year military presence in Afghanistan has ended.”

Biden said he will address the nation on Tuesday on his decision to not extend America’s presence in Afghanistan past Aug. 31, but said in his statement that “it was the unanimous recommendation of the Joint Chiefs and of all of our commanders on the ground to end our airlift mission as planned.”

“Their view was that ending our military mission was the best way to protect the lives of our troops, and secure the prospects of civilian departures for those who want to leave Afghanistan in the weeks and months ahead,” he wrote.

The President also made clear he intends to hold the Taliban accountable to their commitment to allow those seeking to leave the country will be able to do so safely.

“The Taliban has made commitments on safe passage and the world will hold them to their commitments. It will include ongoing diplomacy in Afghanistan and coordination with partners in the region to reopen the airport allowing for continued departure for those who want to leave and delivery of humanitarian assistance to the people of Afghanistan,” the President wrote.

Earlier Monday, CENTCOM Commander Gen. Kenneth McKenzie acknowledged that the US military “did not get everybody out that we wanted to get out.”

Biden ended his statement “with a moment of gratitude for the sacrifice of the 13 service members in Afghanistan who gave their lives last week to save tens of thousands,” naming each of the American service members killed.