Our live coverage of the US' withdrawal from Afghanistan has moved here.

The efforts to evacuate people from Kabul are winding down as the August 31 deadline approaches, but continue despite grave dangers on the ground.

Approximately 1,200 people were evacuated from the capital in the last 24 hours, almost entirely on US military flights, according to the White House.

It's down from a high point last week when 21,000 people were evacuated in a 24-hour period (last Monday into Tuesday).

It brings the total to approximately 116,700 people evacuated from Afghanistan since August 14, and 122,300 people since late July.

President Joe Biden was briefed overnight on a rocket attack at the Kabul airport.

He was informed, per a statement from press secretary Jen Psaki, “that operations continue uninterrupted at HKIA (Hamid Karzai International Airport), and has reconfirmed his order that commanders redouble their efforts to prioritize doing whatever is necessary to protect our forces on the ground.”

This post has been updated to include additional information.

The Taliban would like a “cultural, economic, trade and financial relationship” with India, a top official said in a speech posted online Saturday.

Stanekzai added: “Our land and air corridor trade routes to India via Pakistan is very important. We want Pakistan to keep the trade route open for our businessmen and traders. We give great importance to political, economic, cultural and business relationship with India among all and we want to work with them closely in this area."

The Indian government has not made any official comments on a future relationship with Afghanistan, citing the rapidly evolving ground situation.

When asked about recognizing the new leadership in Kabul, Arindam Bagchi, the spokesperson for the Ministry of External Affairs (MEA) said at a news conference last week that the prime concern for now was people's security and safety.

"Currently, there is a lack of clarity or no clarity about any entity, forming a government in Kabul. So, I think we are jumping the gun here regarding recognition," he added.

Earlier this month, Beheshta Arghand made history in Afghanistan.

Arghand, a female anchor at TOLO, an Afghan news network, interviewed a senior Taliban representative on the air. The interview garnered headlines around the world.

Two days later, Arghand did it again, interviewing Malala Yousafzai, the activist who survived a Taliban assassination attempt, in what TOLO described as the first time Yousafzai had ever been interviewed on Afghan TV.

Arghand was blazing a trail, but her work has been put on hold. She decided to flee Afghanistan, citing the dangers that so many journalists and ordinary Afghans are facing.

Arghand corresponded with CNN Business via WhatsApp and recounted the experience of the past two weeks.

Ultimately, she said, "I left the country because, like millions of people, I fear the Taliban." 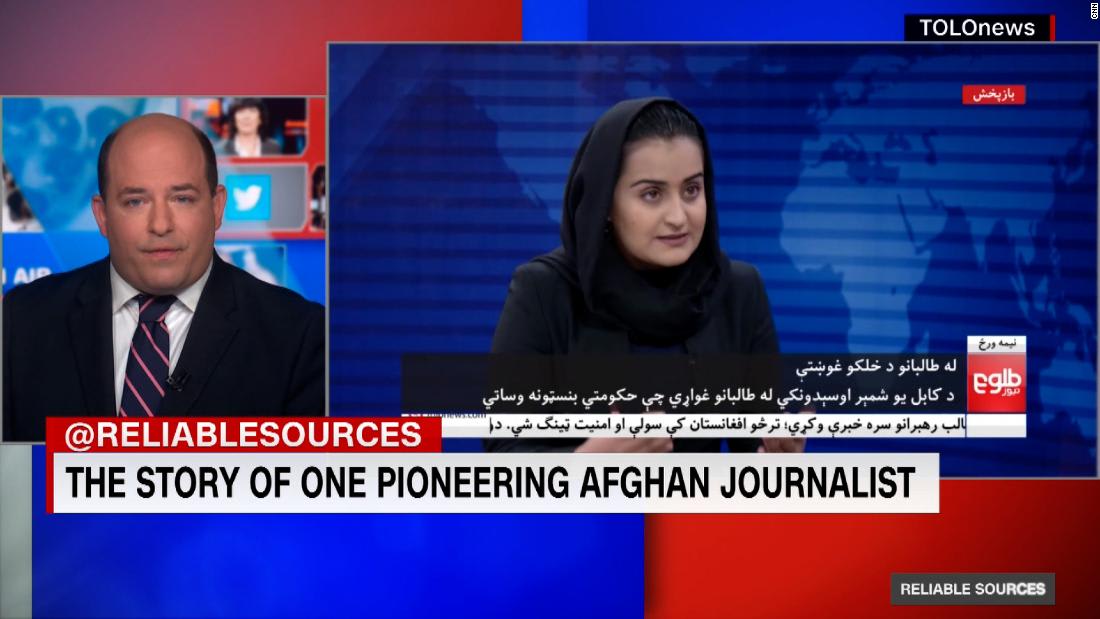 For some on the ground in Afghanistan, the next hours can’t go soon enough. For others they’re desperate to slow down the clock.

As many as five rockets were fired at Kabul airport Monday, US officials said, with no casualties reported so far.

The rocket attack activated a counter-rocket -- or C-RAM -- defense system, essentially mitigating the force of the onslaught.

It appears the militants were able to use a civilian car as a kind of makeshift rocket launcher. Videos show the car completely incinerated.

It comes as the US carried out a defensive airstrike in Kabul on Sunday, targeting a suspected ISIS-K suicide bomber who posed an "imminent" threat to the airport, US Central Command said.

Nine members of one family -- including six children -- were killed in the drone strike targeting a vehicle in a residential neighborhood of Kabul, a relative of the dead told a local journalist working with CNN.

All of this gives a sense of just how tense the situation still is, as we enter the final hours of the US's 20-year war in Afghanistan.

Around 15,000 evacuees from Afghanistan are awaiting onwards travel at the Ramstein US Air Base in Germany, the base’s Public Affairs Office (PAO) said on Monday.

Ramstein is one of the largest US airbases outside America, and has been transformed into a temporary transit point for evacuees to the US.

More than 8,000 evacuees have departed on approximately 38 flights from Ramstein Air Base to their resettlement locations, the majority of which are in the US.

Within the next 12 hours, more than 2,000 evacuees are expected to depart Ramstein Air Base, according to the PAO.

In Italy, a recently arrived Afghan refugee tells CNN about what he's accomplished over the past 20 years and his heartache at leaving it all behind.

Dr Arif is a two-time refugee. He first fled Afghanistan in 1993 when he was 32-years-old, walking for weeks to reach safety in Pakistan before eventually moving to Italy.

He returned in 2006 with the Italian Development Agency to rebuild his country, creating infrastructure like roads and training medical staff.

Elsewhere in Italy, Arianna Brigante is chairwoman of the agency Nove Onlus, which has worked in Afghanistan for the last decade to empower women.

The group set up a women's driving school in Kabul and provided a shuttle service so women and girls could get home from work and school safely.

"It was a hopeful generation and I've think we've lost that," Brigante told CNN.

She said the Afghan women who Nove Onlus were able to help evacuate were now without hope.

"They don't think there is a future in Afghanistan anymore," Brigante said.

The US carried out a defensive airstrike in Kabul Sunday, targeting a suspected ISIS-K suicide bomber who posed an "imminent" threat to the airport, US Central Command said.

Among those killed were nine members of one family -- including six children -- a relative of the dead told a local journalist working with CNN.

One witness said it was 5 p.m. when he heard the noise of a rocket coming.

"I was scared and ducked by the side of the road." The man "waited to see where it will hit and then there was a loud bang."

After the rocket hit, "all the neighbors tried to help and brought water to put out the fire" he said.

He said they included "the father of the family and another young boy and there were four underage children. They were dead. They were in pieces. There were two wounded.
Those who had died "were in a bad state. You could not look at them. It was really horrible," he added.

One neighbor also said he lost his friend in the airstrike.

"The father and children were sitting in the car to go out somewhere," he said adding that "at this point the rocket hit.
"Now there is nothing left in their house. There were 10 or 20 of them who have all been killed. Not much left of their house and nothing can be recognised, they are in pieces."

And another witness said the noise of the rocket was "horrific."

"The family had just driven the car inside the house. All the men folks were in the car," the witness said adding that he and other witnesses "removed six dead bodies."
"These were normal people, they had civilian jobs," he said "The people were not affiliated to anyone," he added.

A group of 86 Afghan media workers and their families arrived in Mexico on Sunday, the Mexican Foreign Ministry announced. This is the third group of evacuees from Afghanistan to have arrived in Mexico since the Taliban takeover.

The evacuation of the workers was coordinated by Mexican embassies in Iran, Qatar and the United Kingdom and the Mexican federal government, said the Foreign Ministry said.

The travel and living costs of the group will be covered by private sponsors and civil society organizations, the ministry added.

“The reception of people from Afghanistan is a political decision of the Mexican State and it had been carried out in full adherence to the historical tradition of humanitarian assistance in our country,” the Foreign Ministry said in the statement.

On August 24, Mexico received a group of five Afghan women from a renowned women’s robotics teams. The following day, 124 Afghan journalists who requested humanitarian protection arrived in the country.

A civilian vehicle was apparently used as an improvised platform in the rocket attack aimed at the Kabul airport on Monday.

Video obtained by CNN showed the vehicle in flames on a street in Kabul's Khair Khana neighborhood after the rockets were fired.

The incinerated remnants of the car are covered with debris, the glass missing from all windows and rubber melted from the tires. The car appears to have been modified with six launch tubes, which are visible inside the car's charred skeleton.

Zia ud Din, a potato-chip seller whose house was next to where the car was parked, heard the bang of the rockets launching.

"There were a few big bangs, we all were inside the house -- the whole family -- when we heard the loud bangs, we ran into the garden, everything caught fire," he said. "Fortunately, no one is killed or injured."

Taliban fighters had initially cordoned off the area, telling bystanders the situation remained dangerous, though they later allowed journalists on the street.

A US official told CNN the rockets were likely launched by ISIS-K, but cautioned it was too early to know for sure.