Our live coverage has ended. Read more about the situation in Afghanistan here.

As evacuations from Afghanistan approach their final days, the White House says approximately 12,500 people were evacuated in 24 hours.

That brings the total number of people evacuated via US military and coalition flights to 105,000 since August 14, and 110,600 since late July, per the White House.

The Kremlin condemned the terrorist attacks in Afghanistan and said the situation continues to be a cause of “grave concern” for Russia.

“We condemn these attacks in the strongest possible terms. Of course, this is very sad news about the large number of casualties,” Kremlin Spokesman Dmitry Peskov said in a conference call with journalists.

The “pessimistic predictions” about the threat of attacks from ISIS were “unfortunately” realised, Peskov added.

“Unfortunately, pessimistic predictions are confirmed that terrorist groups, both ISIS and their derivatives, will not fail to take advantage of the chaos in Afghanistan. The danger to all is great. And this continues to be a cause for our grave concern,” he said Friday.

When asked if Russian President Vladimir Putin will be making a statement about the situation, Peskov emphasized that Russia is not part of the US-led coalition in Afghanistan.

“The President has no such plans. Because you know that Russia is not part of the US-led coalition, which was in Afghanistan for decades and carried out the withdrawal of troops, which provoked the situation,” he said.

Peskov added he is not aware of any appeals for help from Russia: “To help someone, you need someone to ask for it. I am not aware that there were any appeals from the Americans in this regard.”

Russian intelligence agencies are monitoring the situation and assessing whether the a threat of terrorist attacks is spilling over to other countries, Peskov said.

The Kremlin spokesman added that Russia is not yet planning new evacuation operations but said relevant departments are monitoring and further action will depend on the evolving situation, which he noted is “quite unpredictable.”

CNN's national security analyst, Peter Bergen, said it was "wishful thinking" from President Joe Biden that the US could strike back against those responsible for the attack at Kabul's airport on Thursday.

Last night, US President Joe Biden vowed vengeance against the perpetrators, the Islamic State affiliate known as ISIS-K. He said: "We will not forgive. We will not forget. We will hunt you down and make you pay."

But the assertion was "ludicrous," Bergen said Friday. He questioned the US's ability to carry out such an offensive, saying American intelligence capabilities had been severely depleted in Afghanistan due to the withdrawal.

We're pulling out all US troops and our intelligence assets are almost entirely gone. So where do you engineer this strike from?"

Bergen explained that the raid that killed former al Qaeda leader Osama bin Laden in Pakistan in 2011 had taken years to plan, despite the US having substantial intelligence in Pakistan.

Germany will leave a plane housing an intensive care unit, called 'MedEvac,' in the Uzbekistan capital of Tashkent for 24 hours in order to support American forces if necessary, Germany’s defense ministry tweeted Friday.

Germany evacuated more than 5,000 people from Afghanistan over the course of its mission, the German Foreign Office said in another tweet.

“Under extremely difficult and highly dangerous conditions, our colleagues in Kabul evacuated more than 5000 people in a joint effort with Bundeswehr,” the office said.

The defense ministry said German soldiers were among the 5,347 people evacuated since August 16. More than 4,000 of that figure were Afghan nationals, it tweeted.

The government of Pakistan is asking hotels across Islamabad to close reservations and place all rooms at government disposal for at least three weeks starting Friday to accommodate thousands of foreigners being urgently evacuated from Afghanistan.

The directive comes in an official document from the office of the district magistrate, which was issued right after the deadly Kabul airport attacks.

Even before the attack, scores of people were lined up on a major Afghanistan-Pakistan border crossing, trying to make their way into Pakistan.

Spain has ended its evacuation mission from Afghanistan, with the last remaining people expected to land at the Torrejon military airbase near Madrid later on Friday, the country’s Presidency said in a statement.

The planes also carried four Portuguese soldiers and 85 Afghans and their families who had worked with NATO countries.

It added that the Spanish Armed Forces has "evacuated a total of 1,900, Afghans and their families," who had worked with Spain, other countries, and international bodies.

More than 18,700 evacuees from Afghanistan have come through Ramstein US Air Base in southwestern Germany so far, according to the air base's Public Affairs Office (PAO).

As of 7:30 a.m. local time on Friday, approximately 76 US Air Force aircrafts have landed at air base during the evacuation mission.

A huge influx of more than 10,000 evacuees are expected to arrive at the air base over the coming hours.

Flight are expected to continue throughout the weekend.

More than 4,100 evacuees have departed Ramstein on approximately 18 flights to their resettlement locations, the vast majority of which are in the US.

The GOP is divided over how hard -- and how quickly -- to go after President Joe Biden in the wake of Thursday's deadly attack on US troops at the Kabul airport.

While a growing chorus of rank-and-file Republicans have called for Biden's resignation or impeachment over the administration's disastrous exit from Afghanistan, key leaders and others in the party have struck a more measured tone for the moment.

House Minority Leader Kevin McCarthy even pushed back against some of his members during a private conference call Thursday night, suggesting that the demands for Biden's immediate ouster are counterproductive and saying the focus right now needs to be on getting Americans out of Afghanistan safely. But he also promised to pressure the administration.

"Promise you there is going to be a reckoning," McCarthy, who spoke to Biden by phone on Thursday, told members on the GOP conference call, according to sources. "We are going to hold every single person accountable." 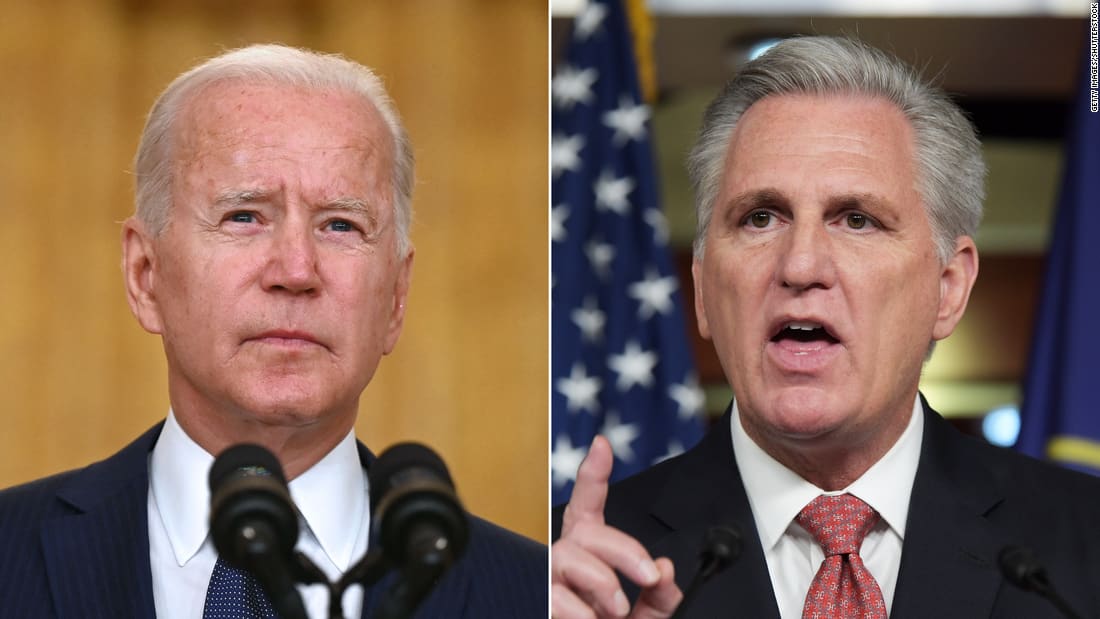 President Joe Biden said the US is on track to complete its hurried airlift in Afghanistan by August 31 even as questions remain over who will be able to leave and when.

Keeping this deadline in mind, here are where other countries' evacuation operations stand.

"I’m pleased that we were able to lift our people out not too long before this attack," Dutton told a Sky News reporter.

New Zealand: The country's final evacuation flight from Afghanistan landed in the United Arab Emirates Thursday night local prior to the attacks at the Kabul Airport.

At least 276 New Zealand nationals and residents had been evacuated, the government added.

Germany: Troops are “all safely back from Kabul”, Germany’s Defense Minister Annegret Kramp-Karrenbauer said in a tweet Friday. Germany’s armed forces have used Tashkent, Uzbekistan, as a staging post for evacuations from Afghanistan.

Spain: The country has ended its evacuation mission, the country’s Presidency said in a statement.

Two military planes carried out the last 81 Spaniards remaining in Afghanistan, along with four Portuguese soldiers and 85 Afghans and their families who had worked with NATO countries.

France: The country will see its evacuation mission “through to the end and will maintain its humanitarian and protection efforts for Afghans under threat,” despite Thursday’s deadly attack on Kabul’s international airport, the Élysée said in a statement.