Our live coverage has ended. Read more about Hurricane Fiona in the posts below.

There's already damage to many structures across the Dominican Republic, said Juan Manuel Mendez, the country's emergency management director of operations. At least 54 homes have been reported damaged so far, he said.

Emergency officials transported 789 people to safety, Mendez said at a briefing Monday. There are currently 519 people in 29 shelters, he said.

There are 10 electric circuits offline currently, but officials did not have an exact number of how many customers were without power.

Mejia said "this is still an emergency event" and the storm is still affecting the country.

Raquel Peña, the nation's vice president, tweeted Monday afternoon urging the Dominican people "to be attentive to the information from" COE and officials "given that the effects of hurricane #Fiona will continue in the next few hours."

"The government is in permanent session, responding to the emergency," she said.

Dealing with catastrophic flooding, mudslides and widespread power outages, some people in Puerto Rico are comparing the aftermath of Hurricane Fiona to Hurricane Maria — the devastating storm that hit the island almost exactly five years ago.

Juan Miguel Gonzalez, a business owner in southern Puerto Rico, told CNN correspondent Leyla Santiago that he thinks Hurricane Fiona has been worse than Maria. He said a lot of people have lost everything in the flooding.

“Maria was tough winds, but this one with all the rain, destroyed everything on the houses — it's unbelievable," he said.

As search and rescue efforts continue on Monday, Gonzalez told Santiago that it's a small town and residents there feel like they need to take care of themselves.

The National Guard was called in to rescue hundreds of people overnight, Santiago reported, but there are still places in Puerto Rico that are too dangerous for rescue crews to get to as rain continues to fall on Monday.

Some background: Hurricane Maria inflicted catastrophic damage to the territory’s infrastructure. It took almost a year for power to be restored across the island.

Right now, after Fiona, more than 1 million people are still without power, as of Monday morning. Additionally, about 66% of customers don't have water, Santiago reported.

The Federal Emergency Management Agency says the response to Maria was the largest and longest to a domestic disaster in US history. Massive flooding damaged more than half a million homes. Many families are still rebuilding.

Millions of people in Puerto Rico are still without power as of Monday morning after Hurricane Fiona made landfall this weekend as a Category 1 storm with sustained winds of 90 mph.

The storm is continuing to bring torrential rain to the island, even as it starts to move into the Atlantic. Fiona is expected to strengthen and could hit Turks and Caicos as a Category 2 hurricane on Tuesday and threaten Bermuda later this week.

Puerto Rico was hit by Hurricane Maria five years ago. Now, as the island starts to recover from Fiona, several organizations already have teams on the ground providing assistance. You can help them here. 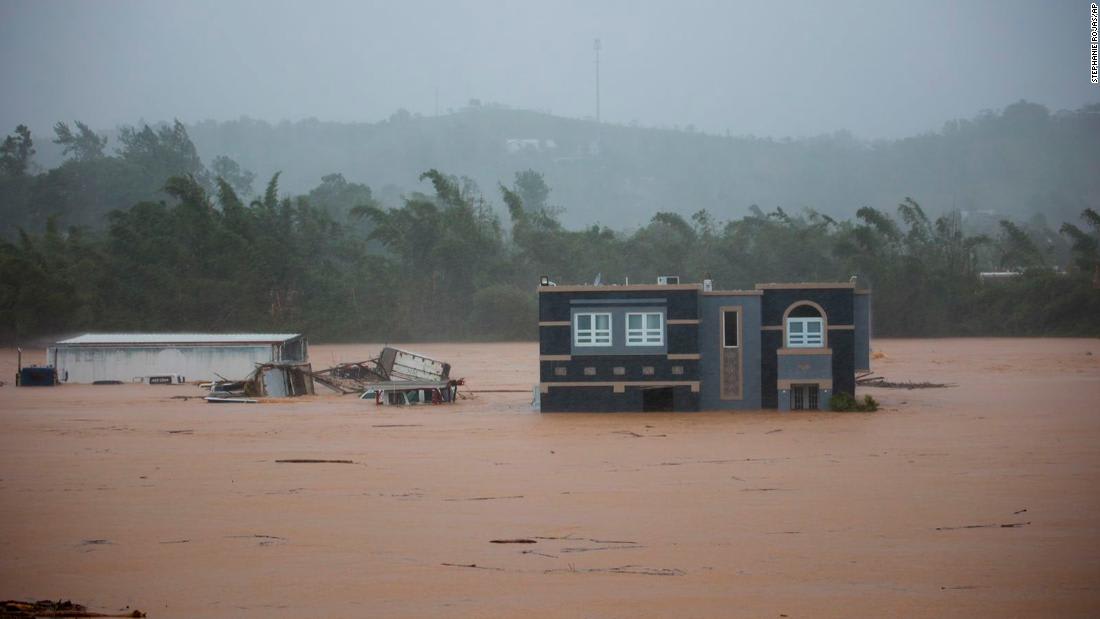 How to help victims of Hurricane Fiona

Hurricane Fiona is likely to strengthen as it moves into the Atlantic, according to the National Weather Service's National Hurricane Center.

In its most recent forecast at 2 p.m. local time, the hurricane center said the "center of Fiona will pass near or to the east of the Turks and Caicos on Tuesday," where it is predicting 4 to 8 inches of rain.

Northern and eastern parts of the Dominican Republic will also be impacted by tropical storm conditions, with an additional 4 to 8 inches of rain, according to the hurricane center. Some local areas could get up to 10 inches of rain total, the forecast said.

As the storm turns to the north-northwest, it will strengthen over the next few days and "become a major hurricane by Wednesday," the forecast said. Hurricane-force winds can extend up to 30 miles away from the center of the storm.

Southern parts of Puerto Rico could see an additional 4 to 8 inches of rain. All of this rain will produce "life-threatening and catastrophic flooding along with mudslides landslides across Puerto Rico," the forecast said.

Most of the island is still without power, local officials said.

The National Weather Service is warning anyone visiting East Coast beaches to be aware of potentially dangerous tide conditions caused by Hurricane Fiona.

The storm is continuing to bring heavy rain and flooding to Puerto Rico on Monday, as much of the island remains without power.

The NWS said in a tweet that while Fiona will stay offshore of the US, it could lead to strong rip currents and rough surf starting Wednesday through the end of the week.

The NWS in Wilmington, North Carolina, shared a map showing those factors affecting the coast near Myrtle Beach, Carolina Beach and Surf City.

"If you plan on visiting the beaches then pay attention to flags and follow the guidance of lifeguards and other local beach officials," the tweet said.

Although scientists say it got off to a slow start, the National Oceanic and Atmospheric Administration and Colorado State University predict this Atlantic hurricane season is still expected to be above-normal. This is according to the most recent forecasts released last month.

Hurricane Danielle was the season's first hurricane, officially getting the designation on Sept. 2. That means that last month was the first August in 25 years to go without a single named storm in the Atlantic.

The last time a season’s first hurricane came this late was on Sept. 11, 2013, with Hurricane Humberto.

The average date for the season’s first hurricane is August 11.

This was only the third August since 1950 that the Atlantic saw no named storm. And it’s the first time since 1941 that there wasn’t a named storm in the Atlantic from July 3 to August 30, said Phil Klotzbach, a research scientist at Colorado State University.

The second storm, Hurricane Earl strengthened into a hurricane on Sept. 6 near the Caribbean. Most recently, this weekend, Fiona strengthens into a Category 1 hurricane, 50 miles south of Puerto Rico.

The St. Thomas maritime port has already reopened, she tweeted.

González said in a tweet that the US Coast Guard will start search and rescue missions "by air and sea soon."

"They anticipate that there may be sunken small vessels, but so far have no received reports," she said.

Emergency crews have rescued 1,000 people so far in the aftermath of Hurricane Fiona, according to Maj. Gen. José J. Reyes, the adjutant general of the Puerto Rico National Guard.

Responders rescued one woman who was hanging from a tree for seven hours after she attempted to cross flood waters. In the same area, officials said emergency crews also helped three more people who also tried to get across rising water.

The general said rescues were widespread and urged everyone to heed warnings from officials. Reyes said there were also many rescues overnight and into the morning in Salinas after the river burst.

"This is still a tropical weather event, as history has taught us, we'll now start seeing the runoff from the mountain region" in the south toward the north, Reyes said, urging those in hazard areas to seek shelter.

The governor said 75% of the cellular infrastructure is operational following the brunt of the storm. He attributed the functioning communications to generator upgrades made after Hurricane Maria.

"Maria served as an exercise for the people who handle emergencies, at all levels, the coordination during Fiona has been exemplary," the governor said. "The communication has been excellent, but this is not over... we keep going 24/7," he added.

Most of the island is still without power.

FEMA has 400 officials on the island currently dedicated to Hurricane Fiona recovery, Pierluisi said, adding that he plans to request a disaster declaration from President Joe Biden. The President approved an emergency declaration for the storm on Sunday.

"We're not there yet, we're still in recovery mode," Biden said.

Rain from Fiona caused more widespread flooding across the island than when Hurricane Maria hit in 2017, Puerto Rico officials said at a briefing on Monday.

There are 2,146 people and 254 pets being housed in 113 shelters as of Monday, said the governor. Officials have had up to 2,300 people in shelters in the past, said Pierluisi.