Our live coverage has ended. Read more about Hurricane Fiona in the posts below.

Hurricane Fiona has weakened slightly due to interaction with Hispaniola and now has winds of 85 mph with higher gusts, according to the 11 a.m. ET update from the National Hurricane Center. The center of the hurricane is moving off the northern coast of the Dominican Republic near eastern Samana Bay, which should allow it to begin to strengthen again later today.

Heavy rains from Fiona will continue to produce life-threatening and catastrophic flooding along with mudslides and landslides across Puerto Rico through tonight, the hurricane update said. Life-threatening flash and urban flooding is likely for eastern portions of the Dominican Republic through early Tuesday.

During the next two to three days, the hurricane should gradually turn toward the north-northwest and north with steady strengthening, becoming a major hurricane within the next couple of days.

Here's a look at the latest advisory from the National Hurricane Center: 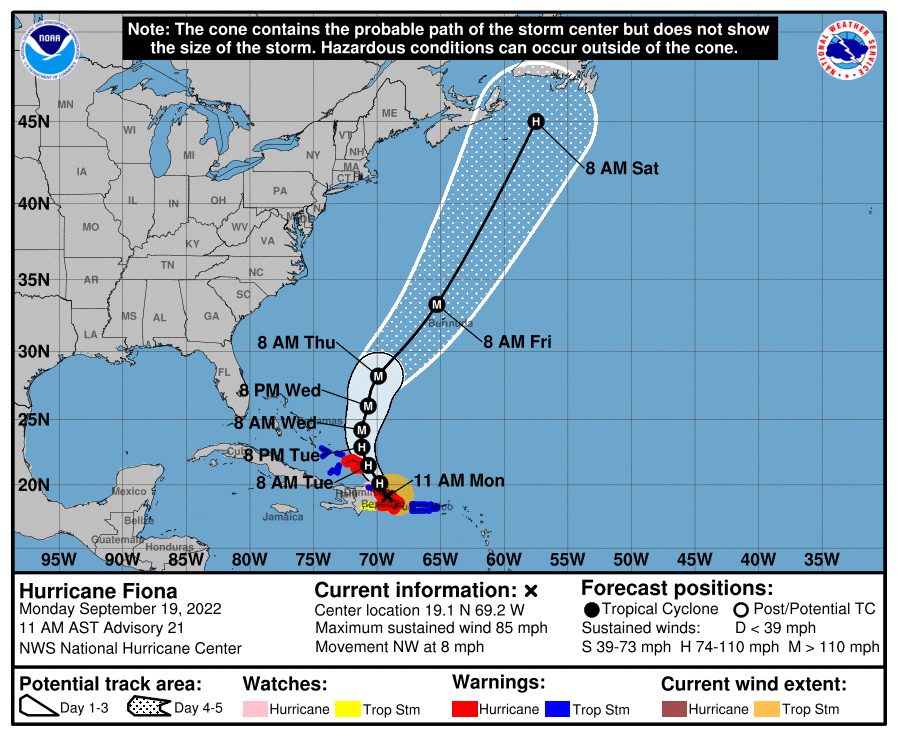 The Guanajibo River is at 29.2 feet, according to the National Weather Service. Its past record, set during Hurricane Maria on September 20, 2017, was 28.59 feet. According to NOAA/USGS river gauge data, the river rose 17 feet in about 12 hours from Sunday into Sunday evening. The river starts overflowing its banks at 21-22 feet.

The Municipality of Mayaguez — Hormigueros is located in the municipality on the western side of the island — says it is continuing to conduct rescues in the area.

More than a million people remain without power in Puerto Rico Monday morning after Hurricane Fiona knocked power out across the island.

Electricity has been repaired for some "within the municipalities of Toa Alta, Toa Baja, the San Juan metropolitan area, Bayamón and Corozal," the company tweeted.

LUMA urged residents to stay away from downed wires as crews continue to work in hazardous conditions.

The Puerto Rican energy company operates and manages the electric power transmission and distribution system on the island, according to its company website.

As Fiona is moving slowly to the northwest on Monday, it is still dropping flooding rain on Puerto Rico, where more than 1.4 million people are without power. Some parts of the island still bear the scars of Hurricane Maria, which devastated Puerto Rico almost exactly five years ago.

After Hurricane Maria inflicted catastrophic damage to the territory’s infrastructure, it took almost a year for power to be restored across the island.

Samuel Rivera and his mother Lourdes Rodriguez lived without power for about a year after Maria struck, Rivera told CNN’s Layla Santiago. On Sunday morning, they lost power once again, conjuring up similar fears to those they had five years ago.

They said they are also concerned a nearby river may overflow and the trees surrounding their home may be felled by the powerful winds.

Some more context: The hurricane made landfall on the southwestern coast of Puerto Rico Sunday afternoon, bearing down on the island with severe winds of up to 75 miles per hour and bringing 6-24 inches of rain to some areas by the end of the day, according to the National Weather Service.

LUMA Energy, the main power utility in Puerto Rico, said in a statement Sunday it could be days before power is restored, adding “several transmission line outages” are contributing to the blackout. The process will be done “gradually,” Governor Pedro Pierluisi said in a Facebook post.

The website PowerOutage.us reported the entire island was without power, early Monday morning, adding LUMA had “reenergized some circuits, however there is limited information, and no numbers on how many customers have been restored.”

Power outages have become a familiar crisis for many who live in Puerto Rico. Just five months ago, residents experienced another islandwide blackout after a fire broke out in a power plant.

The storm is continuing to move northwestward. Here's a look at what to expect next:

Here's a look at the latest forecast from the National Hurricane Center: 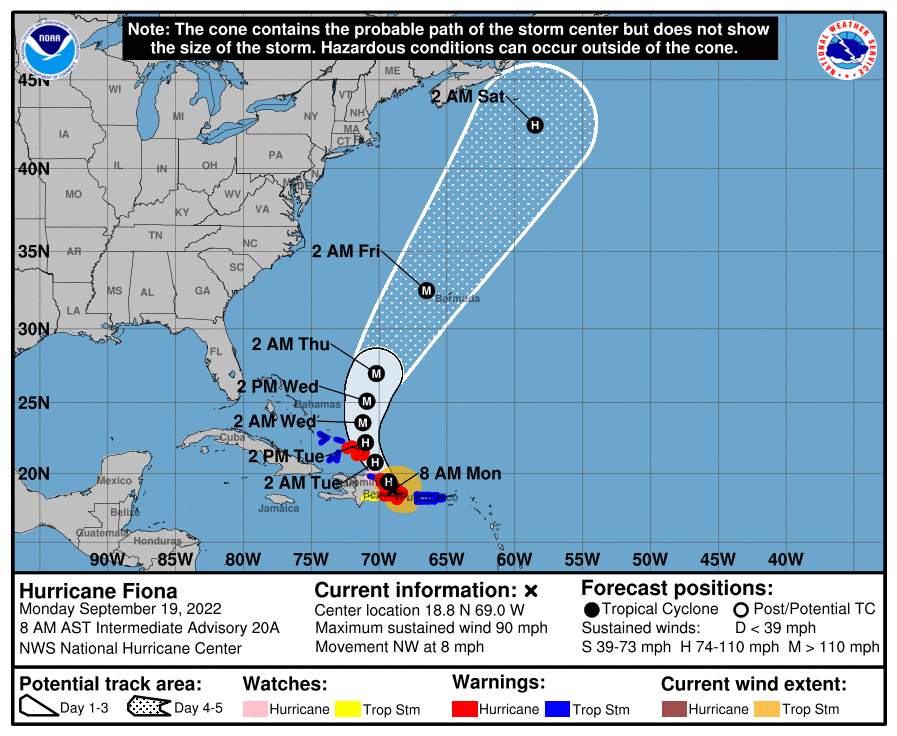 "The power system at all the hospitals in the Medical Center Complex has been restored," Dr. Mellado said, referring to the island’s most important medical complex, which stretches across 227 acres. "Our patients are safe and receiving the medical care they need.”

Still, even with the help of LUMA Energy technicians, who helped get generators online after the power went out, health care providers decided to transfer eight cancer patients to the Oncological Hospital. The decision was made swiftly and with the well-being of patients in mind, said Mellado.

"I appreciate the personnel from the Puerto Rico Fire Department, emergency medical staff and Disaster Management-NMEAD for the transfer of patients to the Oncological Hospital," the secretary said.

Fiona — currently boasting sustained winds of 90 miles per hour — remains over the eastern Dominican Republic. But the storm’s impacts continue to be felt in Puerto Rico, where heavy rainfall and catastrophic flooding continue across much of the US territory.

Nearly the entire island remains under flash flood and flood warnings. More than a foot of rainfall has been reported in several locations, and one reporting station north of the city of Ponce reported over 2 feet of rain in the last 24 hours.

Southern Puerto Rico can expect an additional 4 to 6 inches, with up to 10 inches maximum possible in some locations. That would result in a storm total of 12 to 20 inches of rain, with local maximums of 30 inches.

These rains will continue to produce life-threatening and catastrophic flooding along with mudslides and landslides across Puerto Rico.

Fiona is expected to strengthen as it moves away from the Dominican Republic later Monday, heading north over warm water. By Tuesday morning, the storm is forecast to be near the eastern Turks and Caicos Islands. There, it will continue to turn north before shifting to the northeast, nearing Bermuda on Friday as a major hurricane.

Hurricane Fiona moved from western Puerto Rico to the eastern side of the Dominican Republic overnight, as a Category 1 storm with maximum sustained winds of 90 mph.

Fiona's eye made landfall near Boca de Yuma at 3:30 a.m. local time, according to a special update from the National Hurricane Center. The Punta Cana International Airport recently reported a sustained wind of 51 mph and a gust of 79 mph.

The storm is moving slowly northwest at 8 mph, carrying torrential rains and the threat of flooding, the National Hurricane Center said.

Rain continues to fall in Puerto Rico, where much of the island remains under flash flood warnings early Monday.

Eastern areas of the Dominican Republic may see flooding as well as mudslides and landslides in higher areas, according to the National Hurricane Center.

Power remains out in Puerto Rico and much of the island remains under a flash flood warning.