Record-breaking cold blasts the US 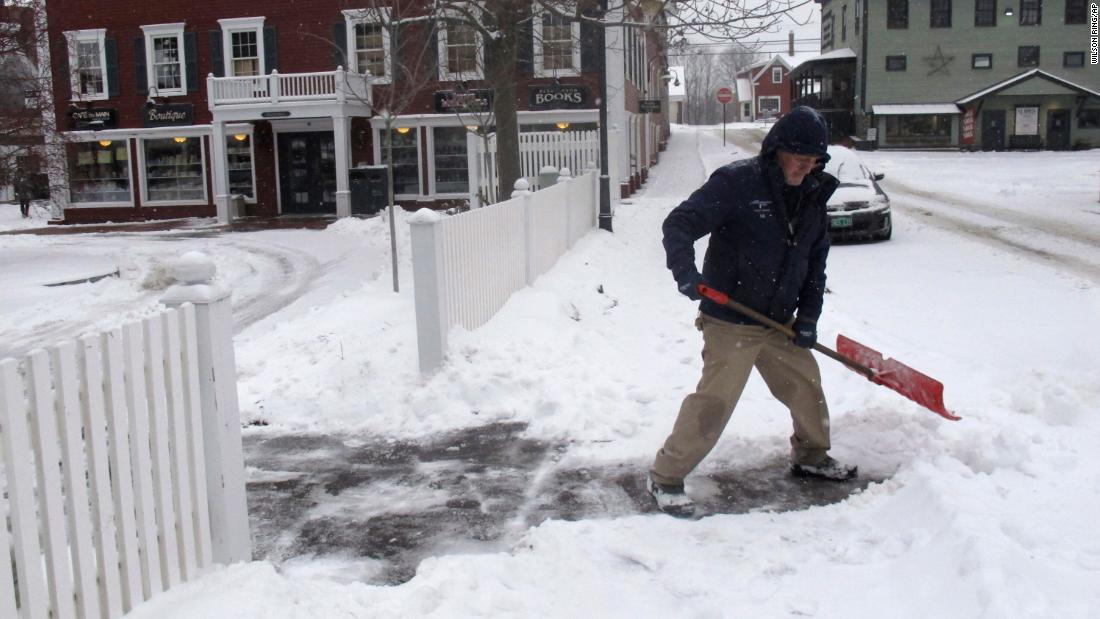 Hundreds of records are expected to fall with temperatures generally 20 to 40 degrees below normal, as a blast of Arctic air sweeps across two-thirds of the United States.

Here's what we know about the cold blast:

Snow and ice already have caused issues for flights.

More than 1,200 flights were canceled Monday at Chicago's O'Hare airport. That morning, an American Eagle flight slid off the runway. At the time, there was light snow with visibility of less than a mile, wind gusts of 30 mph and a temperature of 23 Fahrenheit.

Here are the current temperatures across parts of the country: 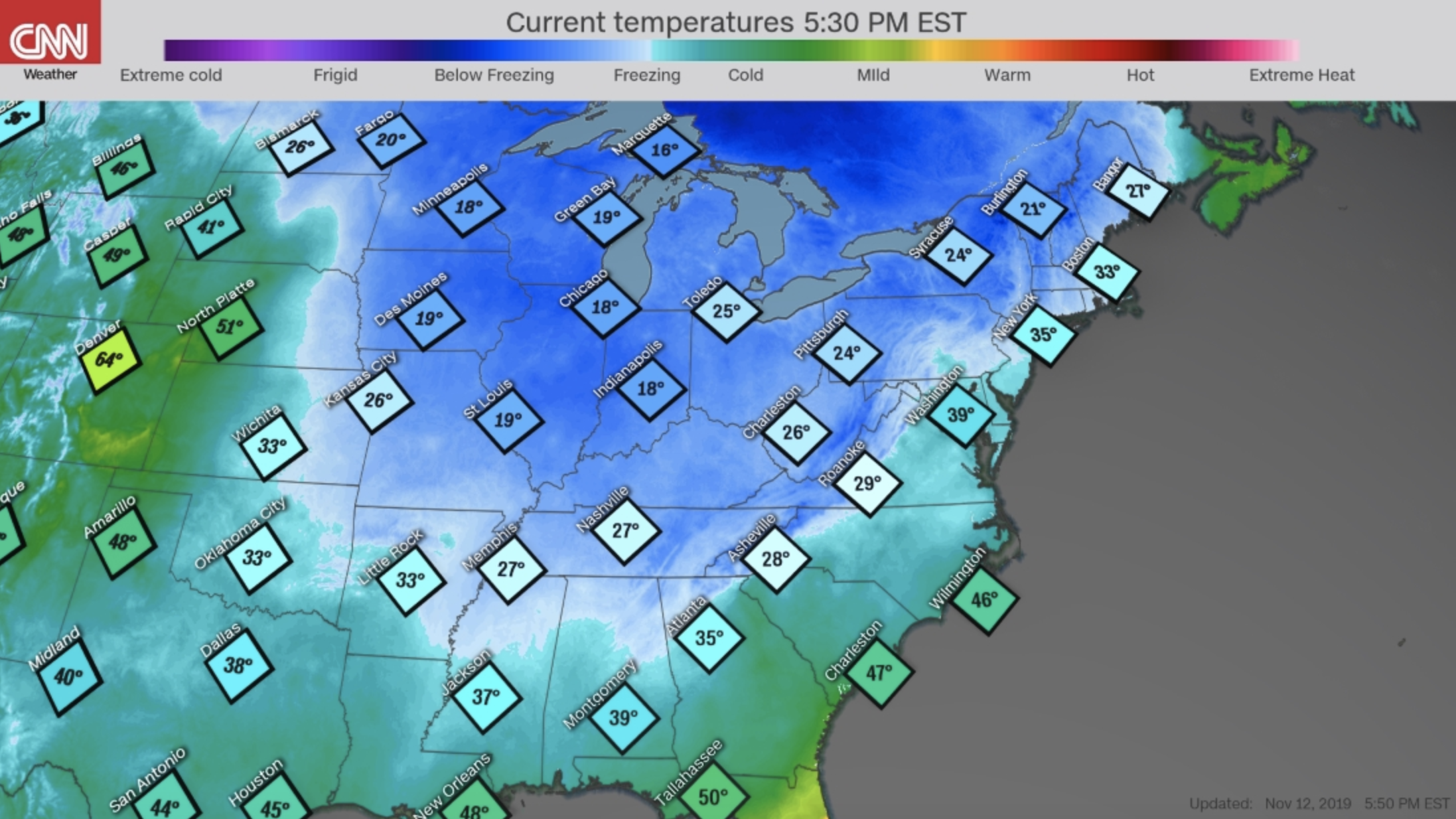 An arctic blast has temperatures plummeting across the US today — and the cold is forecast to continue.

In some midwestern cities the wind chill is causing temperatures to dip into the single digits and below zero.

Take a look at the current wind chills in some major cities around the country: 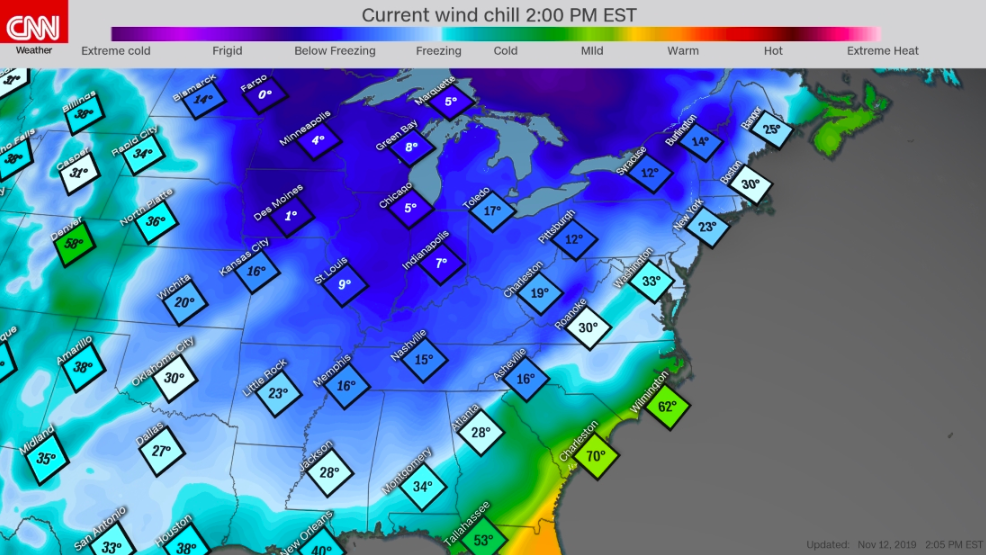 It's freezing across the US today — and the cold will continue. This Arctic plunge is very rare for this early in the season, with hundreds of records broken, some dating back more than a century.

These numbers show exactly how cold it is:

Temperatures are dropping rapidly in cities around the country.

By tonight, record-breaking low temperatures are expected across the country as the cold front moves off the eastern seaboard. As many as 300 records could be broken with temperatures more typical for January than November.

Here's a look at where the temperatures currently stand in cities around the US: 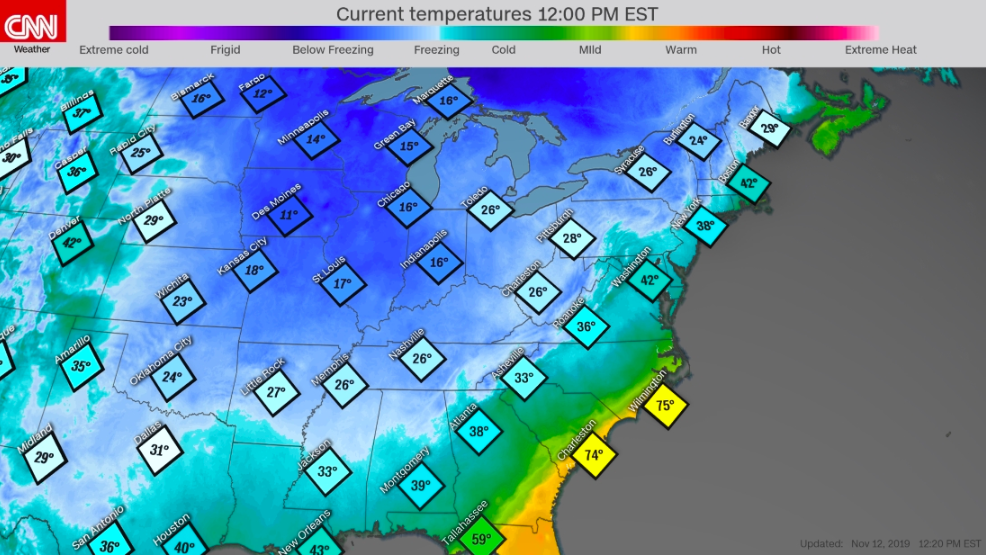 The cold air from this Arctic blast is moving south today, and states like Georgia will see dramatic temperature drops within the span of hours from the mid-50s to near freezing.

That freezing air really did come all the way from the Arctic, the National Weather Service in Atlanta said.

The service tweeted a model showing the air traveling toward the South:

Snow arrived in the Great Smoky Mountains in Tennessee and has covered all 680 feet of North America's longest pedestrian suspension bridge, the Gatlinburg SkyBridge.

Schools across the US are closing or issuing delays ahead of the expected freeze.

Across the northeast, more than 70 schools in Vermont, New Hampshire and New York state have already canceled classes due to the snow, according to Vermont Public Radio.

In Texas, several schools have announced delays, and the Texas Department of Transportation spokesman Rick Dailey says they will be monitoring road and weather conditions throughout the night, CNN affiliate KRIS reported.

It is currently snowing in Brownsville, Texas, which sits on the US-Mexico border.

Why this matters: The city has only had measurable snow there a couple times in the last 100 years, according to CNN meteorologist Barndon Miller.