Our live coverage of the fires burning across the West Coast has ended for the day.

Wildfires are burning across the the US's West Coast today.

If you're just reading in now, here's where the situation stands in California:

The winds have died down, improving wildfire conditions across California. Dry weather will continue to prevail, though, as wildfires continue to produce a smoke blanket across much of the state. This smoke is having an effect on the weather forecasts across the region, typically reducing what would be higher temperatures.

"Don't be surprised by high-temperature forecast busts in this regime," the National Weather Service in Hanford said.

The smoke from the fires in the region will not only continue to make for poor air quality; it will also hamper the temperature forecast in the region. Thicker smoke will make it cooler than the temperature should be because of the blocked the solar insolation, the Hanford weather office said.

Unfortunately, the dry weather conditions, one ingredient for fire growth, will continue across this region.

Across the Los Angeles metro, temperatures are forecast to be above normal through the weekend. But, wildfire smoke in the area could keep temperatures closer to normal, says the National Weather Service in Los Angeles.

Winds will remain offshore but are not forecast to be a strong as Wednesday's winds.

Smoky and hazy conditions will likely prevail in the San Francisco Bay Area through the week's remainder, says the weather office in San Francisco.

Thursday morning smoke was still mixing in with fog and a deep marine layer of clouds.

It could be another day with a similar-looking sky to yesterday's, that had a similar hue to that of the Golden Gate Bridge.

Fire conditions are improved today across Northern California, but the smoke is likely to hang around. Friday and Saturday could see reduced smoke concentration allowing temperatures to rise a bit higher than average. But this highly depends on the direction of the wind and how much smoke remains over the region, says the Sacramento weather office.

Vice president Mike Pence addressed what the federal government is doing to assist with ongoing wildfires across the west, telling Fox News Thursday morning that the Trump administration is working closely with governors of impacted states.

“We’re working very closely with governors in states that are effected. I think when Gov. Gavin Newsom submitted a disaster declaration, President Trump approved that in roughly 24 hours. We’ve issued 22 separate federal fire support grants and we’ve already got resources by the millions of dollars that are flowing to impacted families,” Pence said.

He continued, “But look, my daughter and son-in-law live in California. Our hearts go out to all of those enduring or threatened by these fires and I want to assure everyone that we’re going to make sure that those courageous firefighters, that homeowners and businesses have the full support of the federal government.”

President Trump has yet to offer any public statement of support during historic wildfires. The President last weighed in the devastating fires in California in the middle of August, when another round of blazes was burning north of the Bay Area. His familiar response was to blame the state’s forest management.

Wildfire weather conditions are beginning to look more favorable across Oregon as the winds start to shift from an offshore to an onshore flow and will improve even more moving into the weekend.

The air, however, will remain dry and temperatures in some areas could climb to near triple digits. The only thing that could keep Medford, Oregon, from reaching 100 degrees today will be the blanket of smoke across the region.

Conditions across the current wildfires in southern Oregon will remain unstable and very dry, allowing them to create their own weather patterns.

Red-flag warnings in these areas will remain through the afternoon and into the evening Thursday.

It is difficult to forecast where the smoke will be most hazardous across the state, except, of course, for areas that are close to active fires.

West winds this afternoon and into Friday will begin to move the smoke further inland.

Wildfires are wreaking havoc on California, Oregon, and Washington, killing at least seven people and forcing tens of thousands of people into shelters amid the coronavirus pandemic.

Various non-profit organizations are responding to assist displaced residents and help with recovery. To support all of the organizations helping out, click on the button above or click here.

The Red Cross is working in all three states providing meals, health services, comfort and other support for affected residents.. The organization is accepting donations and looking to enlist thousands of volunteers to help during wildfire season.

United Way of Northern California and Whitman County are providing emergency cash grants to those who lost their homes.

Due to the pandemic, long-term needs like rehousing and income recovery may be particularly difficult for fire victims. The Center for Disaster Philanthropy is allocating funds to help.

The California Fire Foundation's Supplying Aid to Victims of Emergency (SAVE) program accepts donations to help those affected by the fires. The organization provides $250 gift cards to eligible victims.

After setting and tieing record high temperatures yesterday, some of the same locations across western Washington will see even higher temperatures Thursday.

"Persistent high pressure coupled with another day of offshore flow will result in the hottest day of the week today and another day of critical fire weather conditions," the National Weather Service in Seattle said.

A red-flag warning remains in effect through this evening because of the hot and dry conditions. 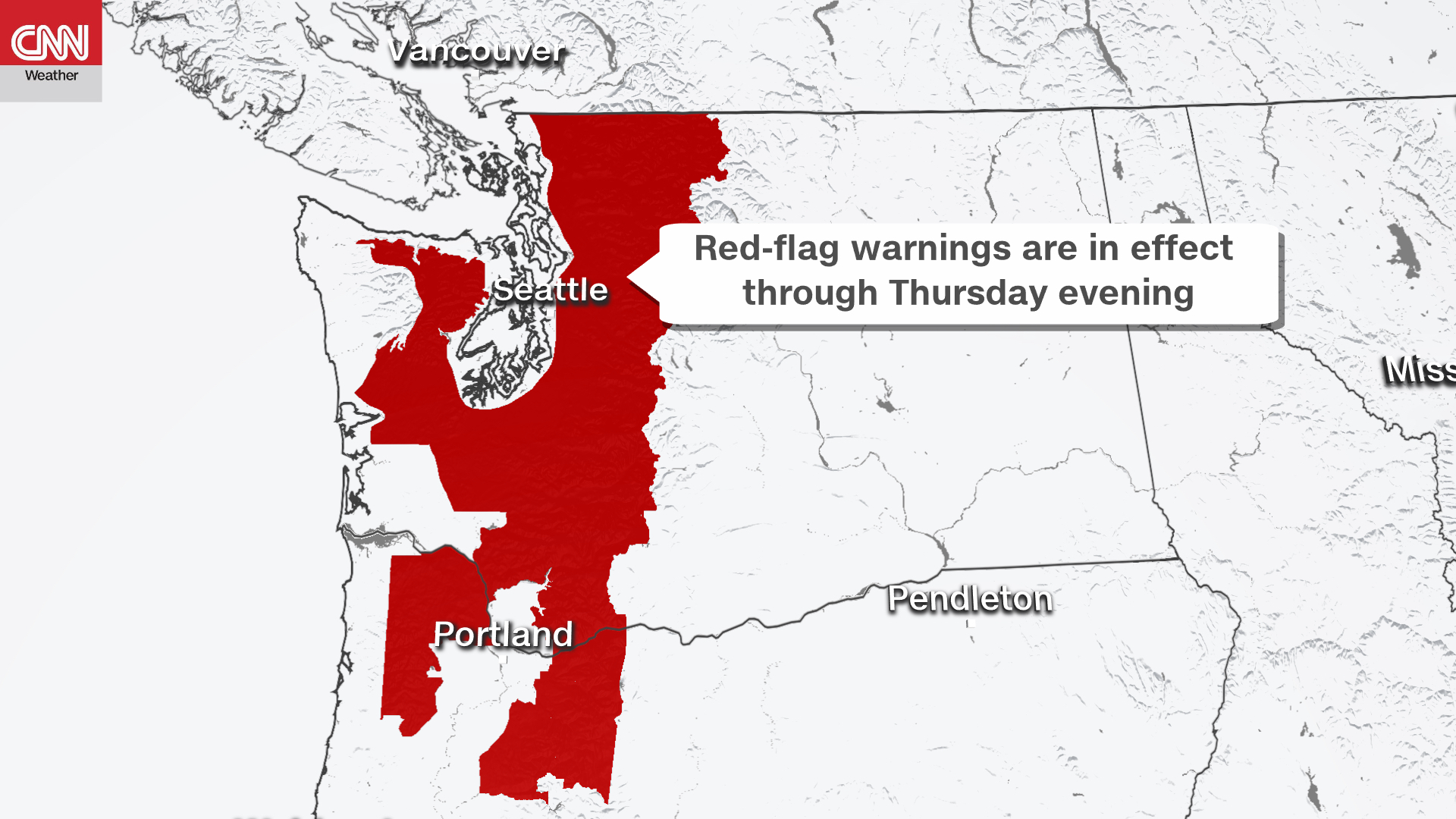 Friday, the winds will finally shift to onshore, raising the humidity, lowering the temperatures and ultimately lowering the fire risk.

However, this wind shift won't likely diminish Washington's plight with smoke. Instead of experiencing smoke from Washington's own fires, it could mean smoke from the Oregon ones.

Nancy Hamilton said driving through the Berry Creek area in Northern California, where the North Complex Fire has scorched more than 250,000 acres, was downright terrifying.

The Butte County resident said she decided to drive to the area Wednesday to get a closer look at the destruction.

"It was a beast, the thing is a beast," she added.

Hamilton says she's currently housing several families who were forced to evacuate their homes, including her best friend's 80-year-old grandmother whose home was swallowed by the flames.

"They're pretty devastated," Hamilton said. "She just lost everything."

"I was able to take photos for her so at least she knows that it was gone," she said. "A lot of people don't know their houses are gone and they're wondering."

President Trump has yet to offer any public statement of support during historic wildfires spreading in the Pacific Northwest and Northern California — even though he vowed federal intervention in those states earlier this summer amid racial unrest.

Trump last weighed in the devastating fires in California in the middle of August, when another round of blazes was burning north of the Bay Area. His familiar response was to blame the state’s forest management.

He hasn’t weighed in on the more recent fires, which have spread to Washington and Oregon. He sent several tweets and retweets on Thursday morning but none about the fires.

What it's like on the ground: Oregon’s governor has said there could be unparalleled devastation in her state, both in terms of property damage and deaths. More than 2.5 million acres have burned in California, a historic figure.

FEMA has freed up some federal funds for combatting the blazes and Trump signed a disaster declaration for California in August, but he has yet to sign one for Oregon, whose governor said she sent in the request on Wednesday night. And he’s so far remained largely silent on the spreading fires.

That is hardly the same response Trump demonstrated after protests turned violent in Portland and Seattle earlier this summer. Trump dispatched federal law enforcement to Portland to protect a federal courthouse, leading to scenes of violent clashes and accusations of federal overreach. Federal officers were also dispatched to Seattle amid protests.

In total, one person has died in the Portland unrest. So far at least seven people have died in the wildfires and more deaths are expected.

Some background: Trump has a history of dismissing wildfires and other natural disasters on the West Coast, where he does not enjoy widespread support. When he visited the site of a major fire in Butte County in 2018, he mistakenly called the town “Pleasure” instead of “Paradise.”

“He told us to stop giving money to people whose houses had burned down from a wildfire because he was so rageful that people in the state of California didn’t support him and that politically it wasn’t a base for him,” Taylor said recently.

Orange and even red skies blanketed San Francisco, Oakland and Berkeley, and ash rained down yesterday, with wildfires raging far in the distance.

"When the smoke and ash get even thicker close to the wildfires, it can cut the sunlight out completely, making it look like the dead of night," CNN meteorologist Judson Jones said.

Residents turned on lights, looking into a rust-colored sky that made it look like nighttime. Winds are carrying the wildfire smoke from afar. Both the Creek Fire and the North Complex Fire are burning more than 200 miles away, yet their presence could be felt in the Bay Area. Other places, such as Salem, Oregon, are experiencing similar apocalyptic glows.

The massive plumes of smoke generated by the wildfires raging across California have led to the longest stretch of unhealthy air quality alerts on record in the Bay Area, with 25 straight days of "Spare the Air" alerts, Erin DeMerritt, Bay Area Air Quality Management District spokesperson, told CNN. The previous record was 14 consecutive days during the 2018 Camp Fire.

"The smoke and ash are acting like nature's version of an Instagram filter," Jones said. "The particles in the air are refracting sunlight similar to the way small air particles do when the sun sets or rises."

About the orange skies: The particles scatter the shorter wavelengths of blue and green, making us unable to see them. The longer wavelengths of red and yellow pass through the bottom, giving us this "haunting" effect, Jones said.

Orange skies covered San Francisco, making Sneha Patil feel like she was on another planet.

"It was surreal," Patil wrote. "It felt like I had woken up to the skies in Mars!"

See scenes from the ground: 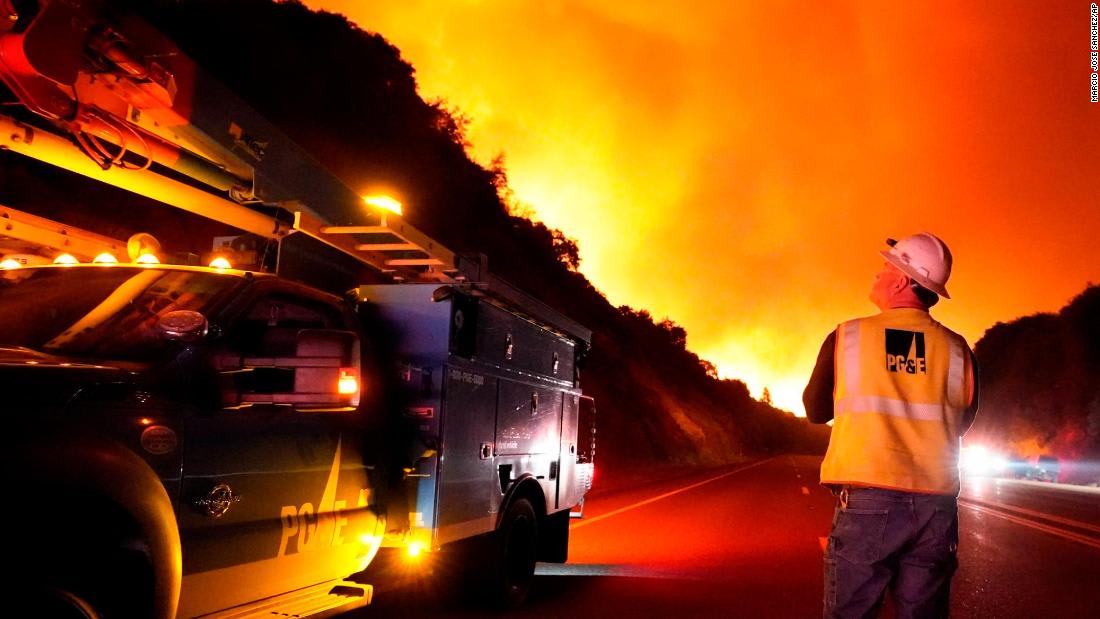 In photos: Wildfires burning in the West