When will separated families be reunited?

At today's status hearing, Judge Dana Sabraw asked the government for a list of all the children under the age of 5 it believes are in the class of children covered by the reunification order — plus any reasons officials believe they may need more time for reunions in particular cases.

The government has until 5 p.m. Saturday to turn over that order.

The American Civil Liberties Union, the plaintiffs’ counsel, will have until Monday at 9 a.m. to respond. The court will reconvene Monday at 10 a.m.

Today was the first of three deadlines a judge set for reuniting migrant families separated at the US-Mexico border. The US government, by today, must make sure separated parent has a way to contact their child.

The Justice Department, at a hearing today, said it believes children and parents have communicated.

There are still two more deadlines coming up:

A judge says that parents who have already been deported are part of the court order that set deadlines for family reunifications.

In an earlier filing, the government asked the court for clarity about whether officials need to reunite children with with deported parents, noting that the judge's ruling did not specify whether deported parents should be included.

Sarah Fabian, with of the Justice Department, said in court that officials did not understand the judge’s order "to be referring to parents who were removed."

But ACLU attorney Lee Gelernt argued that deported parents were included in the judge’s order because the order referred to people who have been in DHS custody.

Judge Dana Sabraw — who issued the original order — said Gelernt’s understanding was correct. Sabraw ultimately said parents who were deported are considered members of the class of parents affected.

Health and Human Service Secretary Alex Azar just tweeted that his department is working to "expedite the reunification of minors with their verified parents."

There's an ongoing status hearing in California following a judge's order calling for family reunifications. Under the order the US government has until today to make sure every separated parent has a way to contact their child.

By July 10, officials must reunify all parents with their children under the age of 5. The deadline for reunifying parents with children 5 and older is July 26.

The Justice Department says 19 parents of separated children under the age of 5 have already been deported.

Sarah Fabian, an attorney for the Justice Department, provided a breakdown of what’s known so far about the roughly 100 possibly separated kids under 5 in custody.

At today's status hearing to review a judge's order calling on the Trump administration to reunite families within a series of deadlines, the American Civil Liberties Union brought up the use of DNA testing.

DNA tests are being used in an attempt to reunite migrant families separated at the US border, said a federal official with knowledge of the reunifications.

Lee Gelernt, an attorney for the ACLU, said any DNA used by the US government must be removed from the database:

“The government, I gather, is saying we’re going to DNA every single person and it’s gonna delay things. We would say that DNA is a last resort. … It shouldn’t be done in every case, but if it is being done in every case, we would ask that it be used only for reunification and then expunged because I don’t know that we want to be creating a database of all these people.”

Under Judge Dana Sabraw's order calling for family reunifications, children under the age of 5 must be reunited with their parents by Tuesday.

At a status hearing, Sabraw asked the Justice Department how many of the approximately 100 children of this age the government believes could be reunified by that deadline.

Sarah Fabian, an attorney for the Justice Department, said that of that group, about half of them have parents in US Immigration and Customs Enforcement custody. For that group, the reunification can occur by the deadline.

About 20% of the kids, she said, have parents that were released from ICE custody.

“For those folks, in some cases, for example, if we’re not aware of where the parent is, I can’t commit to saying that reunification will occur before the deadline. … We’re still determining what the situation is there and whether those are situations where reunifications may not be able to occur within the timeframe.”

A US District judge last month ordered the Trump administration to reunite the families it separated at the border — and said the government must make sure every separated parent has a way to contact their child by today.

There's a status hearing happening right now for that case. At the hearing, Sarah Fabian, an attorney for the Justice Department, said the “government has devoted significant resources” to complying with the court’s order.

Regarding whether they’ve met today’s deadline about communication, she said:

The hearing is ongoing.

A 39-year-old Guatemalan woman named Lesvia was separated from her son on May 19.

She was released from the T. Don Hutto facility Thursday night in Taylor, Texas, but her 10-year-old son is in the Casa El Presidente facility in Brownsville, Texas.

Taylor is about 350 miles north of Brownsville.

Non-profit organization Grassroots Leadership helped Lesvia and other women separated from their children write letters to their kids. 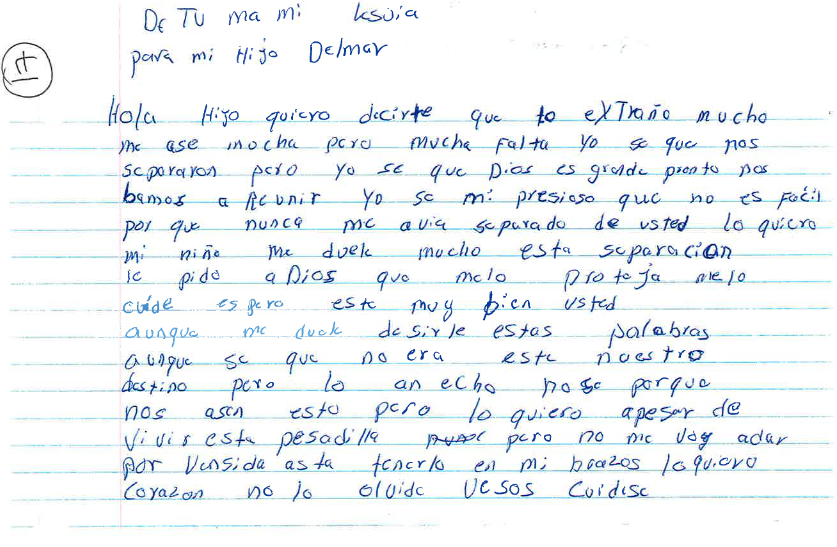