Purdue University President Mitch Daniels said the school is taking a hybrid approach to education as it gears up for the upcoming semester, plus implementing new safety measures for students.

There will be “far fewer” students in classrooms and online alternatives offered in place of larger classes, Daniels said to CNN’s John Berman. Most students will take at least one course online, he said.

“Many teachers, we will insist, teach only online. But those who are in classrooms will be at [an]…extra-protective distance, probably behind Plexiglas and so forth,” Daniels said.

All students will be asked to wear masks, maintain social distancing, practice good hygiene, take their temperature every day and self-quarantine if they experience coronavirus symptoms. The university will do testing and tracing, as well as set rooms aside for quarantine, he said.

“We're going to have to work as hard on the cultural aspects as the physical,” he said.

Daniels, a former governor of Indiana, said there has been a record number of students reserving a spot at the university and the incoming classes have overwhelmingly said they want to be on campus.

Boston Mayor Marty Walsh said offices in the city will begin reopening on June 1, but there will be regulations in place to prevent a spike in coronavirus cases.

Outside of Boston, Massachusetts Gov. Charlie Baker is permitting offices to open on May 25. But Walsh said he is delaying the city’s office reopening by a week because Boston’s population doubles on a typical workday.

“We just feel bringing all those people in at one time is dangerous,” Walsh said. “…I just don't want to see all the work we've done to keep the numbers down and see the leveling off that’s happening here right now be for nothing and see a large spike later on down the road.”

The city is working on implementing safety measures such as temperature checks and tracing across the board, Walsh said.

“I don't think we can afford to shut back down. So I think that we have to get this right the first time,” Walsh said.

Walsh said he would’ve liked to have a few more weeks to wait and ensure coronavirus case numbers continued to decrease, but he thinks the governor’s plan is “thoughtful.”

“There's no magic formula. I think it's going to be being very vigilant on making sure that these industries that open, they follow the strict guidelines laid out for them,” Walsh said.

In the early weeks of the US coronavirus outbreak, staff members in the U.S. Centers for Disease Control and Prevention had tracked a growing number of transmissions in Europe and elsewhere, and proposed a global advisory that would alert flyers to the dangers of air travel.

But about a week passed before the alert was issued publicly -- crucial time lost when about 66,000 European travelers were streaming into American airports every day.

The delay, detailed in documents obtained by CNN, is the latest example to emerge of a growing sense of disconnect between the CDC and the White House.

In interviews with CNN, CDC officials say their agency's efforts to mount a coordinated response to the Covid-19 pandemic have been hamstrung by a White House whose decisions are driven by politics rather than science.

The result has worsened the effects of the crisis, sources inside the CDC say, relegating the 73-year-old agency that has traditionally led the nation's response to infectious disease to a supporting role.

Rising tensions between CDC leadership and the White House over the perception that the agency has been sidelined has been a developing story in the media for weeks. But now, mid- and higher-ranking staff members within the agency -- six of whom spoke with CNN for this story -- are starting to voice their discontent. Those six spoke on condition of anonymity for fear of reprisals.

"We've been muzzled," said a current CDC official. "What's tough is that if we would have acted earlier on what we knew and recommended, we would have saved lives and money."

If America navigates its risky pursuit of a comeback without unleashing a vicious resurgence of coronavirus, it will be in spite of US President Donald Trump, not because of him.

By this weekend, all 50 states will have taken at least some steps to reopening societies and economies as the country stops trying to halt the virus in its tracks and tries to learn to live with it -- at least until a proven therapy or vaccine is developed.

But they will not be shepherded by a president offering advice on how to safely open, empowering his public health officials, or publicly shouldering the fear and concern of his compatriots.

Instead, Trump is undermining his own government's best practices by dosing himself with the drug hydroxychloroquine, discrediting studies that found it isn't effective in combating Covid-19 and refusing to wear a mask as recommended by his own health experts.

But in Trump country, every step the President takes that seems a dereliction of duty to his critics can be perceived by loyal fans as delivering on the promise of establishment-splintering leadership for which they voted in 2016.

Trump's strategy -- that effectively replaces the rallies that invigorate the base he believes is the passport to a second term -- is stirring a combustible political brew that is likely to further deepen national divides exacerbated by the pandemic. 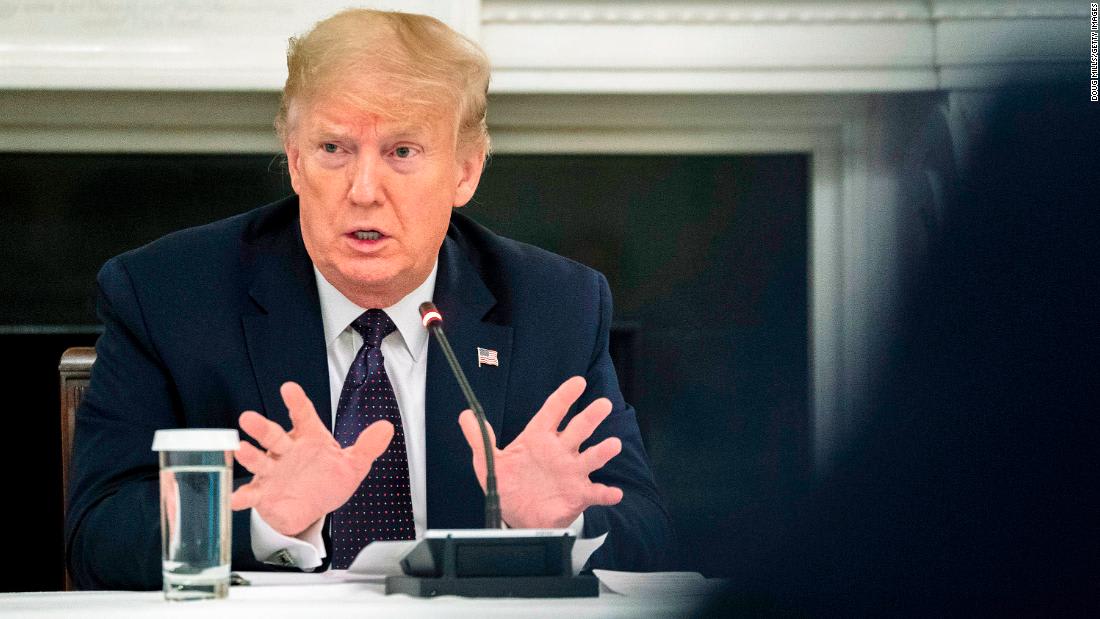 It's Wednesday morning and if you're just reading in, here are the latest updates on coronavirus pandemic from across the US:

CORRECTION: This post has been updated with President Trump's quote on US coronavirus tests.

The United States now has at least 1,528,661 cases of coronavirus and 91,938 related deaths, according to Johns Hopkins University.

Every US state has begun lifting measures enacted weeks ago to curb the spread of coronavirus -- though daily case rates still are rising in parts of the country.

The last state to lift some restrictions was Connecticut, which is set to allow outdoor dining spaces, offices, retail stores and malls, museums and zoos to reopen today, with restrictions.

The state hadn't shut down some services or businesses that other states did, such as parks or outdoor construction. But Gov. Ned Lamont acknowledged the financial costs of the restrictions the state did have.

"I'm afraid there could be a sea change," he told CNN's "New Day" on Tuesday, when asked whether he calculated how many small businesses might not be able to recover.
"We'll see whether people feel comfortable going back to restaurants. Maybe there will be more takeout. The world will change."

As of Tuesday, at least 17 states have recorded a clear upward trend of average new daily cases -- a rise of at least 10% -- over the past seven days, according to an analysis based on data from Johns Hopkins University.

Only 16 states' average new daily cases dropped more than 10%. Some public health experts say declining case rates should be one guide for figuring when states should relax social distancing restrictions.

Read more about where your state stands on reopening here.